Can’t Stop Review: Or How I Learned to Stop Worrying and Love the Dice

A board, a few dice, and some pawns. Can’t Stop has the components of any “classic” board game. And with a publishing date of 1980, some might venture to call it one. While I’m unlikely to ever pick up a game of Sorry! or Monopoly again, Can’t Stop’s name rings true: I just “can’t stop” coming back to this one.

Can’t Stop is so simple in rules and in components that you could play it with only a sheet of paper and 4 dice. In fact, the copy you’ll be seeing in most of the pictures for this review is a handmade version. 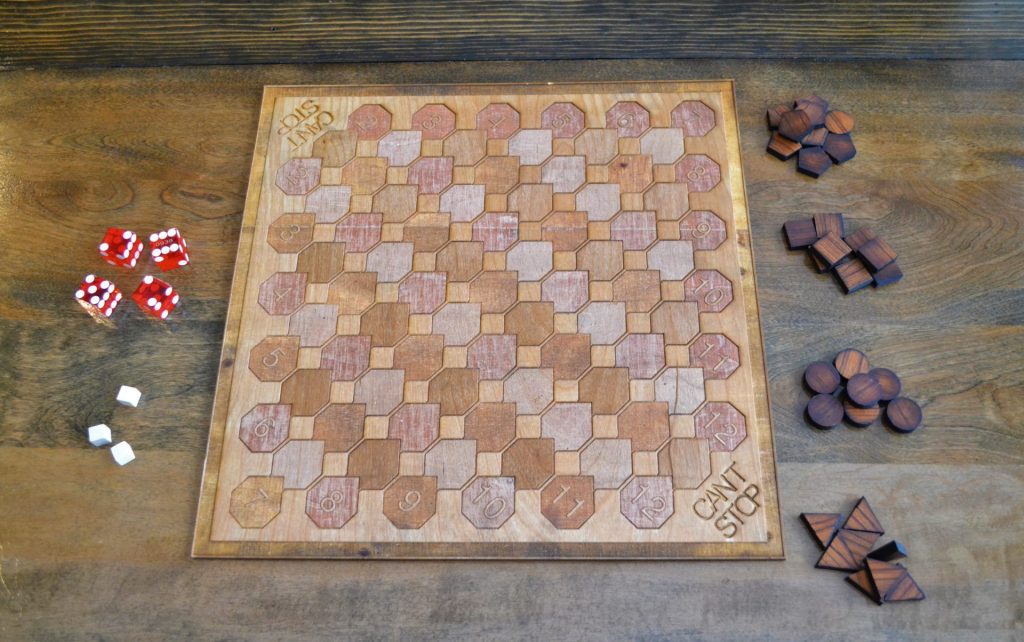 Here’s the version I have at home. As you can see, it has a board with 11 tracks (labeled 2-12), four dice, three markers, and four sets of player pieces. That’s it!

On a player’s turn they roll all four dice and make two numbers by grouping the dice in sets of two. Next they place a marker on each of the tracks for those numbers, or if they’re already on the track move one space ahead. If they made the same number twice, the marker will move up on that track twice instead of once. 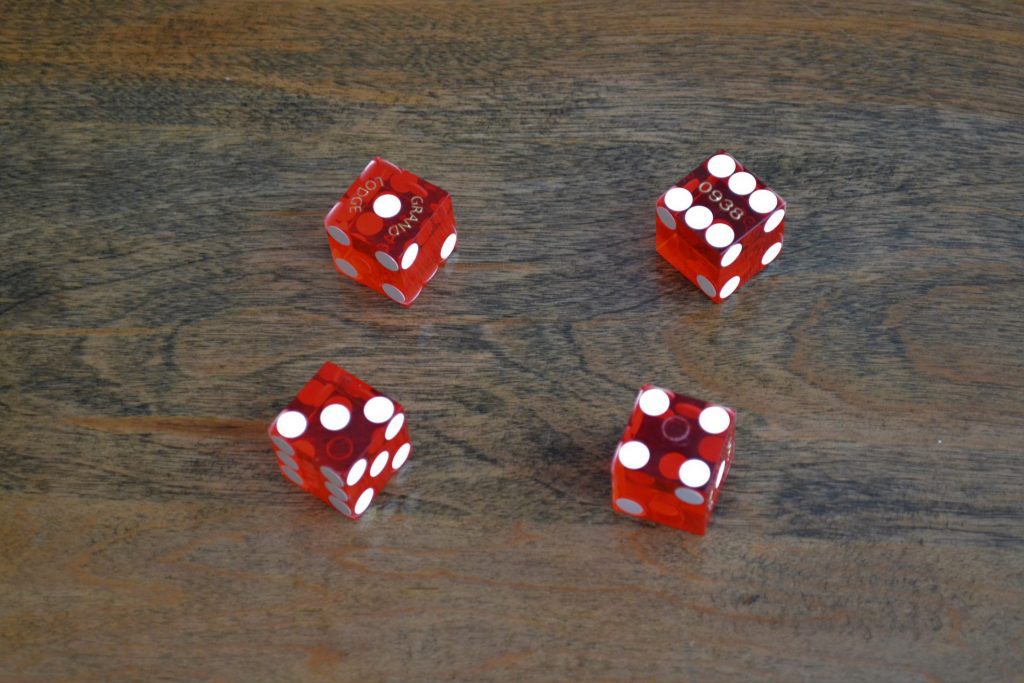 After each roll, they will decide if they’re going to keep trying. At first this will be an easy choice. There are three markers, so you should definitely roll again to get your third marker on the board. But after that, things get tricky. When a player decides to stop, they replace the markers with their player pieces, saving their progress and indicating where they can start on this track the next time they roll and pick that number.

So why stop? Well, the secret is that once you have all three markers on the board you have to get at least one of those numbers when you roll the dice. If you don’t, you bust and have to remove all your progress from that round. So sad!

Later in the game you can also bust by not having any legal moves. You see, once someone makes it to the top of a track, it’s finished. Meaning you can no longer place your markers on it. And if you can’t place or move one of your markers, you bust!

When Can You Stop?

The game ends immediately when someone has placed their pieces at the top of three tracks. They win. 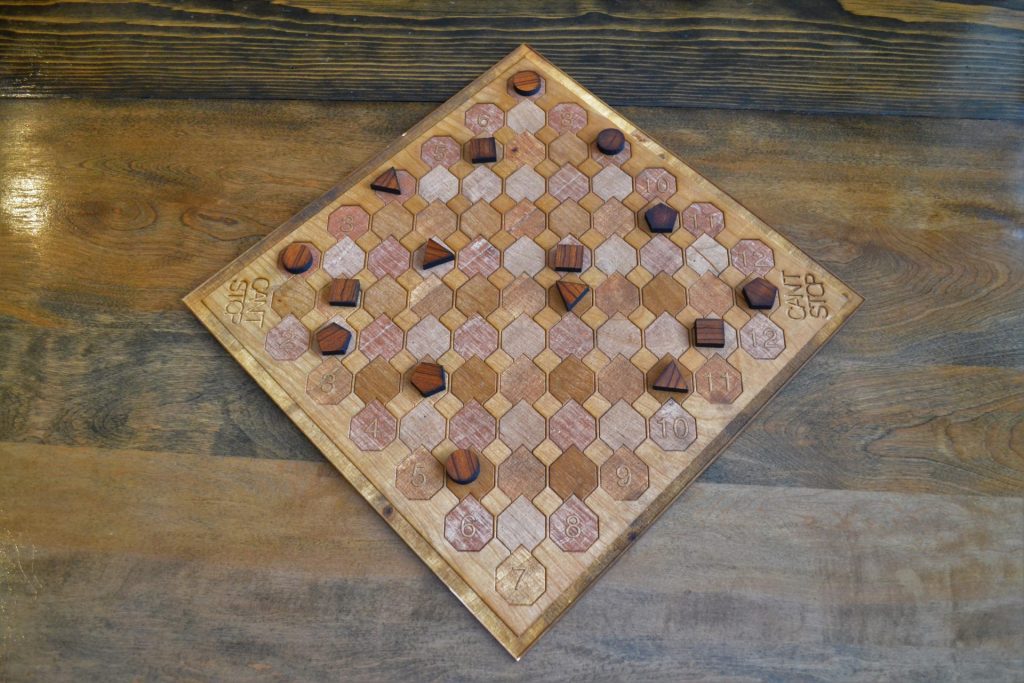 In this game the circle player has won by reaching the top of the 2, 7 and 9 tracks.

The Good and the Ugly

I was hesitant to play Can’t Stop the first time it was shown to me. A game where you just roll the dice and move your markers? Been there, seen that. But then, something amazing happened. I got the rush of pushing the game when you logically should stop. The excitement of rolling those quadruple sixes and zipping past your opponent who thought they had the 12 track locked down. And the crushing disappointment of busting. This gave me some self-insight: I should never go to a casino.

Now, because Associate Editor Ashley Gariepy keeps board game logs, I’m able to give you her account of what happened the first time I played:

…since Kathleen had never played before, I brought this one out. For our first game, Kurt snagged the win … Kurt and I began packing up the game after his win when he looked over at Kathleen for her pieces, which she was holding quite closely to herself, when she said “I just can’t stop!”. We laughed and played another game…and then another after that. I was surprised by how much Kathleen enjoyed the game given how much she dislikes dice rolling in general.

So what is it about Can’t Stop that I find so drawing? Well, there’s a few things. First, you can play the whole game in half an hour or less. It’s easy to teach and even easier to play, meaning it can be easily accompanied by a few drinks (and some tasty treats). Second: there’s the rush of the roll.

In most games, I’m pretty risk averse. In fact, I’m the type to choose to not get negative points even if it means missing out on a big scoring event. But in Can’t Stop, I love taking risks. It’s a short game, and since it is partially luck based there’s always the chance you can make it back to where you were before you busted. So I tell myself, why not?

The light but existing strategy, tied in with the aspect of luck, makes Can’t Stop the perfect game for heckling and edging on your opponents. When I play, we cheer, chant and taunt each other, and that’s all part of the fun. This is the third reason I like this game: player interaction.

Since this is a review, and not just a Games We Love article, it’s time to touch on where Can’t Stop misses the mark. And for me, there’s a big one. This game is ugly. Really ugly. Can’t Stop was originally released when aesthetics weren’t as important as they are today. While there is a beautifully updated cloth version that was released in Japan, most copies are entirely plastic and in glaring red, dated-but-not-retro box. These aesthetics make it something I would never pick up if I didn’t know how much fun it was. 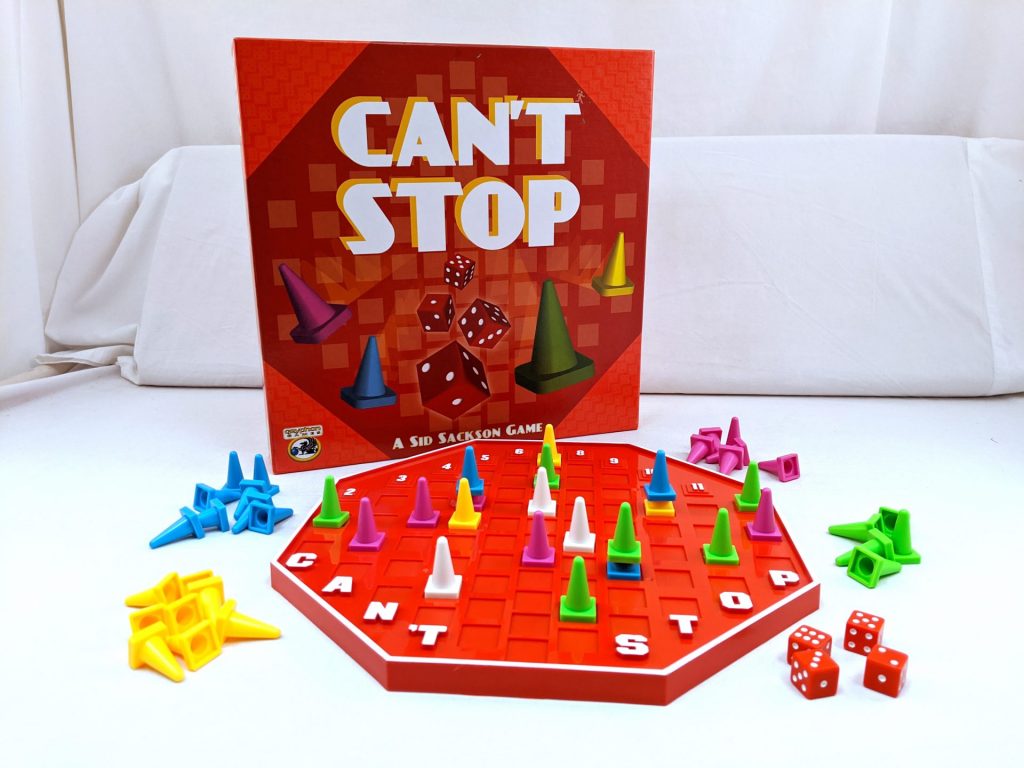 Here it is, in all its red glory. Thanks to Brian Loggins, friend of Meeple Mountain, for providing us with this picture (even if his picture made it look a little too nice to prove my point).

These ugly plastic components also cost more than I’d want to pay for them. With prices ranging from $35-55 (CAD) it’s hard to justify buying. Especially when it is so ugly. However, if you can get past aesthetics (or even better if you have a woodworking friend to make you your own custom board) this game is great fun for gamers and non-gamers alike.