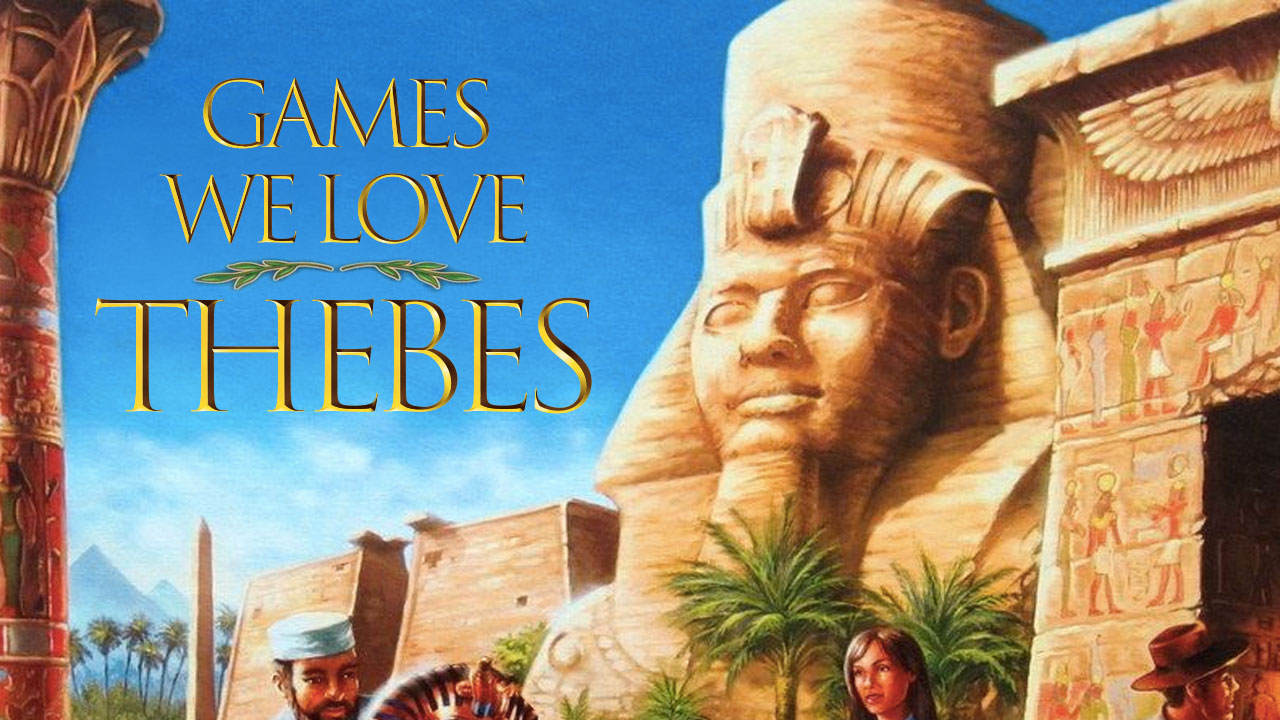 Today we review Thebes, a Spiel des Jahres nominated game with an innovation that influenced modern game design — and you probably didn’t even know it. Continue reading to learn more.

In 2004 designer Peter Prinz had his first two games published: Zauberzeit and Jenseits von Theben. Zauberzeit didn’t receive much acclaim, but Jenseits von Theben (later republished for an English-speaking audience with the name Thebes) went on to be nominated for the Spiel des Jahres prize. While Prinz only had one more published game after this — a card game version of Thebes — it seems that Thebes was enough for Prinz to leave his mark on modern board gaming…even if you didn’t know it. A design choice in Thebes went on to influence many other designers, including one Uwe Rosenberg.

Thebes is a game for 2 to 4 players in which players act as archaeologists in the early 1900s traveling around Europe and building up their knowledge for upcoming excavation expeditions. When they feel prepared to lead an expedition, a player will travel to an excavation site in Greece, Egypt, Crete, Mesopotamia, or Palestine and begin their dig, searching for valuable artifacts that will then score them points. Additional points can be earned if a player puts on exhibitions of these artifacts later in the game.

Depending on the number of players, a game of Thebes is played over 2, 2.5, or 3 years. To better understand a year in Thebes, which isn’t like a “round,” let’s first look at how time is tracked.

Looking at the above picture of Thebes set up, you might have noticed an unusual track around the board. Why does the score track only go to 52? you might have thought to yourself. Well, it’s because this isn’t a score track at all, it’s a time track that indicates the number of weeks in a year.

The time track not only keeps track of the length of the game, it is also how player order is determined. For every action a player takes, they have to spend time by marking it on this track with their Time Marker. The player whose Marker is last on the time track (on the lowest number) takes the next turn. If several Markers are on a space, the player with their Marker stacked on top takes their turn. Does this sound like other games you might have played?

On a player’s turn, they must perform one of the following actions:

Each action corresponds to specific locations on the board and, in order for players to perform the action, they must travel to that location. Traveling is not an action on its own, rather it’s included as part of the action the player performs.

Moving your Archaeologist from one city to a neighbouring city (following the dashed line) costs 1 week, which players indicate on the time track by moving their Time Marker forward. Players may travel as far as they want on their turn along the dashed lines, but for each line used it costs them 1 week. Every location is only 4 lines away from the furthest location.

For every action a player takes, they spend time for travel and time to execute the action.

On the game board there are 4 Research cards displayed. Each card shows some important information: the name of the city in which a player can acquire the card, the number of weeks (time) a player spends to take the card, and the card’s effect.

To take a Research card from the display, the player must move their Archaeologist to the city shown on the card they want and then move their Time Marker forward on the time track for the time they spent to travel to the city and for the time cost on the card. The card then goes faceup in front of the player (in their “research area”). This action may only be taken in Berlin, London, Moscow, Paris, Rome, or Vienna since there are only Research cards that match these cities.

If a player is already in the city, there is no movement cost, but they must still move their Marker ahead according to the number of weeks on the card taken.

Sometimes players won’t be satisfied with the cards displayed. As an action, the player can perform an exchange, discarding all the cards in the display and drawing 4 new ones. To do this, a player must first go to Warsaw and then spend 1 week to clear and refresh the display. If it’s still their turn and they choose this action again, the cost is increased by 1 week (i.e., a second exchange action in a row costs 2 weeks, a third would cost 3).

This action is where players can put all their knowledge (and acquired cards) to use and excavate dig sites in search of high-scoring artifacts. There are dig sites found in Greece, Egypt, Crete, Palestine, and Mesopotamia. To execute an excavation a player must:

Next the player draws tokens from that dig site’s bag to simulate searching for artifacts. The number of tokens they draw depends on the amount of time they choose to invest and their knowledge of the excavation area. To determine this, a player counts the specialized and general knowledge they collected in their research area.

Specialized knowledge includes technical books (which are always in a colour representing the area of expertise), rumours, and assistants.

General knowledge, depicted as an open book, can be applied to any area and gives 1 knowledge point per book. However, a player may never use more points of general knowledge than specialized knowledge.

Now, with their knowledge totaled, the player uses their Time Wheel to see how many tokens they may draw from the area’s bag.

The player must then decide how many weeks they want to spend (the black number). Note that this time is in addition to the time they spent to move to the excavation area. To the left of the number of weeks on the Time Wheel is a number in red, which represents the number of tokens the player will draw from the bag.

Shovels work similarly to assistants, in that they can be used in every excavation area, but will let players draw additional tokens without spending more time.

A player keeps any Items they find on their dig, but the Debris is returned to the bag. This means that the later you go digging in an excavation area, the more likely you are to come out of it with nothing.

Finally, to end the excavation, a player flips their Permission for the area to the side marked with an X. Unless a player acquires a special one-time use Research card, they are only allowed to dig in an excavation area once per year.

The final action a player may perform involves showing off their collected artifacts in an exhibition. Over the course of the game, Exhibition cards will be drawn from the Research card deck and added to the board. These cards have a city, a time cost, a point value, and artifact requirements.

To exhibit their artifacts, a player travels to the city on the card (spending the movement cost) and shows the other players that they meet the artifact requirements. They then take the Exhibition card to score at the end of the game and move their Time Marker a number of spaces as indicated on the card. Exhibited artifacts are not discarded.

Once a player’s Time Marker crosses space 52 on the time track, they begin a new year and flip all of their Permissions back to their valid (not X) side. When the last player crosses space 52, the Year Marker is moved to the next year (tracking the length of the game).

After the final year (1903) has been played out, players proceed to scoring. (There is no scoresheet in Thebes so I like to use the time track to then mark a player’s points since it no longer serves a purpose.)

Players score the point value on any artifact tokens and Exhibition cards they have, as well as a number of points depending on their Congress cards. Then players compare their specialized knowledge in each area — assistants aren’t counted for this — and the player with the most scores 5 points (if there is a tie, each tied player scores 3 points instead). The player with the most points wins.

For what is mostly a Euro-style game, Thebes injects an unexpected amount of thematic gameplay into its mechanisms. For example, consider how you must travel to the various cities to gain knowledge and how the knowledge you gain is weighted: specialized knowledge is more valuable for a certain excavation area, while general knowledge is helpful anywhere but you can’t solely rely on it to do well in your excavations. Consider also how you invest your time — will you do a lot of research before you attempt an excavation to ensure you don’t waste your time at a dig site or will you do a little research, spend more time at a dig site, but hope to get lucky because you are the first archaeologist to excavate there?

There is a fair bit of luck in the game, but this matches the game’s complexity so it works for me. (Thebes was nominated for the Spiel des Jahres after all.) Besides, what else would you expect from a game that has you drawing tokens from a bag? Much like a game of The Quacks of Quedlinburg, Automobiles, or Deep Blue, the focus is more on how you build your strategy to work with and manage the luck element of the game and not how to eliminate it entirely — if you did, you’d probably also ruin much of the game’s excitement.

If you haven’t already put two and two together, Peter Prinz pioneered the time track* that we have seen so many modern games adopt. It wasn’t until ten years later that Uwe Rosenberg popularized this mechanism with his two-player game Patchwork (which he later reimplemented in Nova Luna). But Rosenberg wasn’t the only one: designers of Rocky Road à la Mode, Glen More, Glen More II, AuZtralia, and even more structurally linear games like Tokaido, PARKS and High Rise all use a variation of this time track mechanism.

Thebes is a fantastically fun game. It can be hard to find these days, but if you have the opportunity to do so I would highly recommend jumping into a game and experiencing the thrill of digging for artifacts for yourself. At the very least, you’ll be able to experience Peter Prinz’s time track mechanism firsthand and remind other gamers that it wasn’t actually Uwe Rosenberg who developed it.

*In 2004, a game called Neuland was also released and it featured something similar to Prinz’s time track. Instead of spending time, players spent actions and moved forward a number of spaces on this track.

Welcome To… Review – Roll and Write Your Way Through Urban Planning