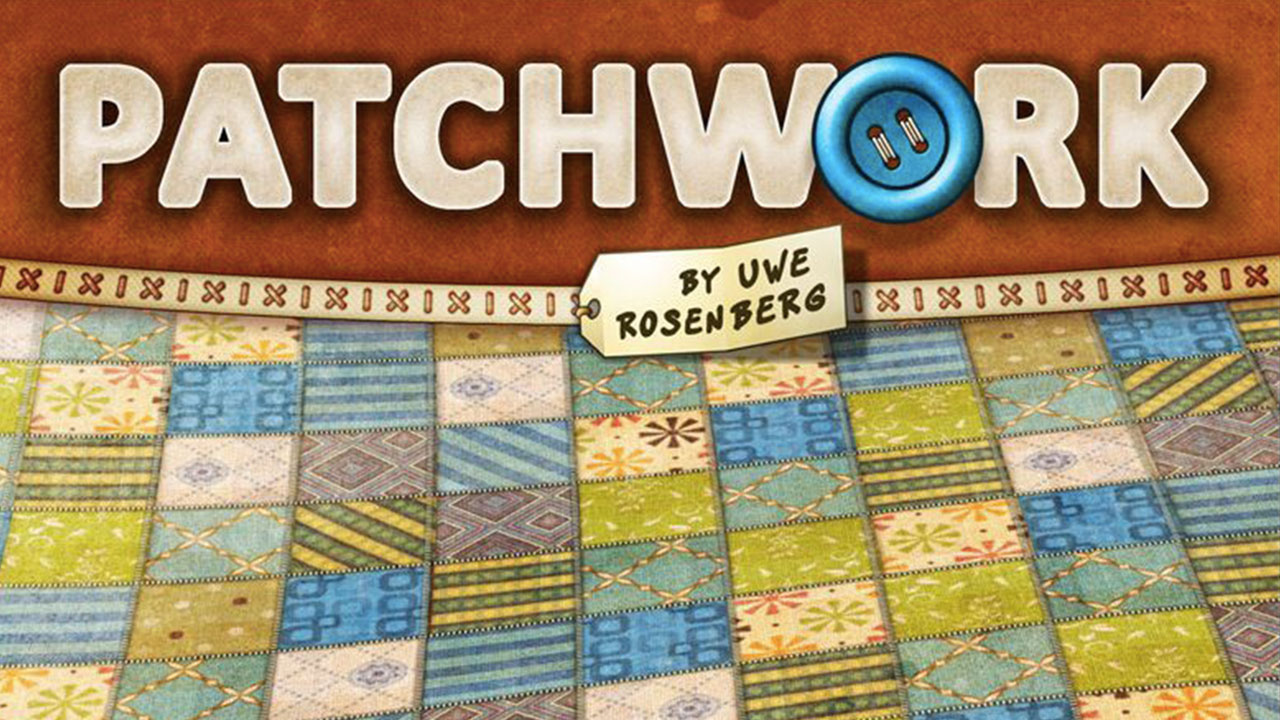 Gather your fabric, grab your needle, and hold onto your batting because we’re about to talk about Patchwork! Read our review now.

When I think about quilting, my mind immediately associates it with early America, women sitting around in sewing circles sipping on iced tea, idly passing the time in pleasant company and conversation. I’m sure I’m not the only one. But quilting is much, much older than that. In fact, almost as soon as fabric was invented, people began quilting with it. The earliest known example is a quilted garment depicted on a carved figure of an Egyptian pharaoh dating back to circa 3400 B.C. Mainly functional at its first inception, quilting quickly turned into an art form.

A quilt, by definition, is at least a minimum of three layers of fabric joined together with some kind of needlework. The needle is passed through all three layers in a series of stitches that results in a piece that has a padded appearance. But producing a quilt is much more than that. Like any art form, quilting takes years to master and producing an amazing quilt is a time-consuming labor of love and devotion.

Released in 2014, Patchwork quickly took the gaming world by storm. This two-player game pits the players against each other in a contest to create the best quilts that they can from a selection of polyomino tiles. Its simple rule set, language independent game play, and charming theme clenched it an Official Recommendation for the 2015 Spiel des Jahres. More importantly, it sent Uwe Rosenberg on a polyomino journey spawning other popular titles like Cottage Garden and Indian Summer, culminating in one of his arguably greatest achievements, A Feast For Odin.

The game uses two currencies: time and buttons. In the middle of the table is a time track with randomly placed quilt tiles surrounding it. On a player’s turn they can choose a tile to sew into their quilt (i.e. fit onto their player board) from a selection of three possible tiles. The caveat is that they can only take the tile if they are able to pay the tile’s button cost and if the tile will actually fit. If they do purchase the tile and add it to their quilt, this will cause their player marker to move a certain number of spaces along the time track. If they are behind the lead player on the track, then they get to go again and can continue taking turns until they have surpassed the leading player. Then it becomes that player’s turn.

Each player begins the game with five buttons, which will quickly run out unless they are replenished. Some of the tiles have buttons printed on them. If any of these are sewn into your quilt, then you will earn buttons during the button income phase. These tiles, though, are typically more expensive to acquire both in terms of time and button costs. Finding a balance between increasing your income, filling in your quilt board, and managing your time is key to doing well because at the end of the game, you’re going to earn points for leftover buttons — and lose points for unfilled spaces on your quilt board.

Now, this is a high level overview of Patchwork. If you’re only interested in finding out what I think about the game, feel free to skip ahead to the Thoughts section. If you’d like to know more about the game play, then read on.

Choose a side of the time track board and place it face up. The two sides of the board are functionally no different from one another, so just go with whichever side you find the most aesthetically pleasing. The single square patches are placed onto the matching spaces on the time track. Then shuffle the quilt tiles and arrange them in a circle around the time track. Find the smallest quilt tile and place the neutral pawn to the left of it. 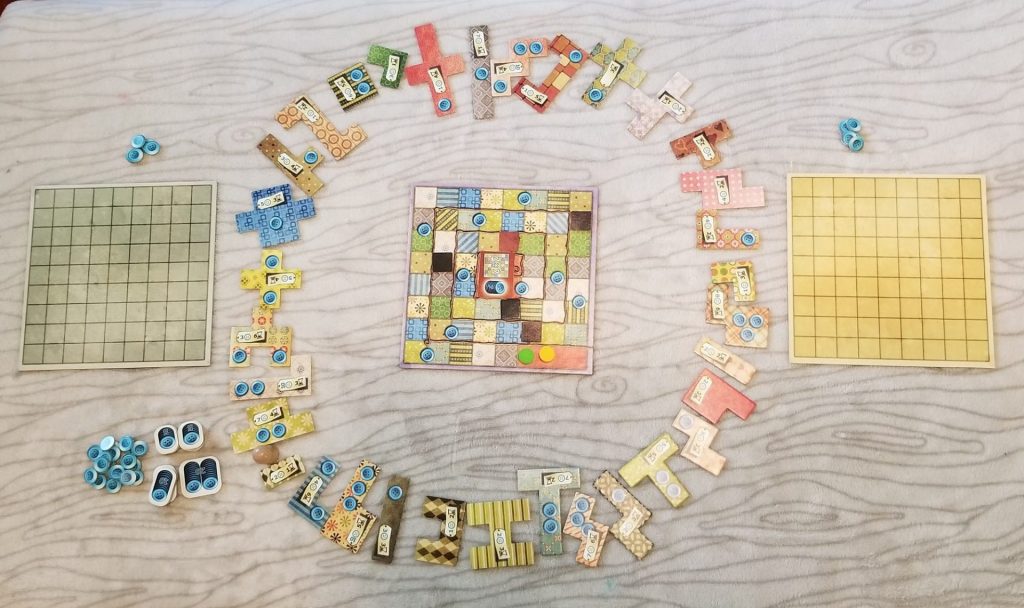 Next, each player chooses one of the two available colors and takes the matching 9×9 quilt board. Their time markers are placed into the starting position of the time track. Each player also begins the game with 5 buttons. The remaining buttons and the special bonus tile (for being the first one to completely fill in a 7×7 area on your quilt board) are set aside for later use. Finally, a starting player is selected and you are ready to begin.

On your turn, you will assess the next three tiles, going clockwise, from the neutral pawn and decide which one (if any) you would like to add to your quilt. Each quilt tile in the game will have at least one of two pieces of information printed on it: a cost in time (always) and a cost in buttons (some tiles cost zero buttons). Each quilt tile also has a distinct shape. Unless a player can pay the button cost and also fit the shape onto their quilt board, they cannot claim the tile. 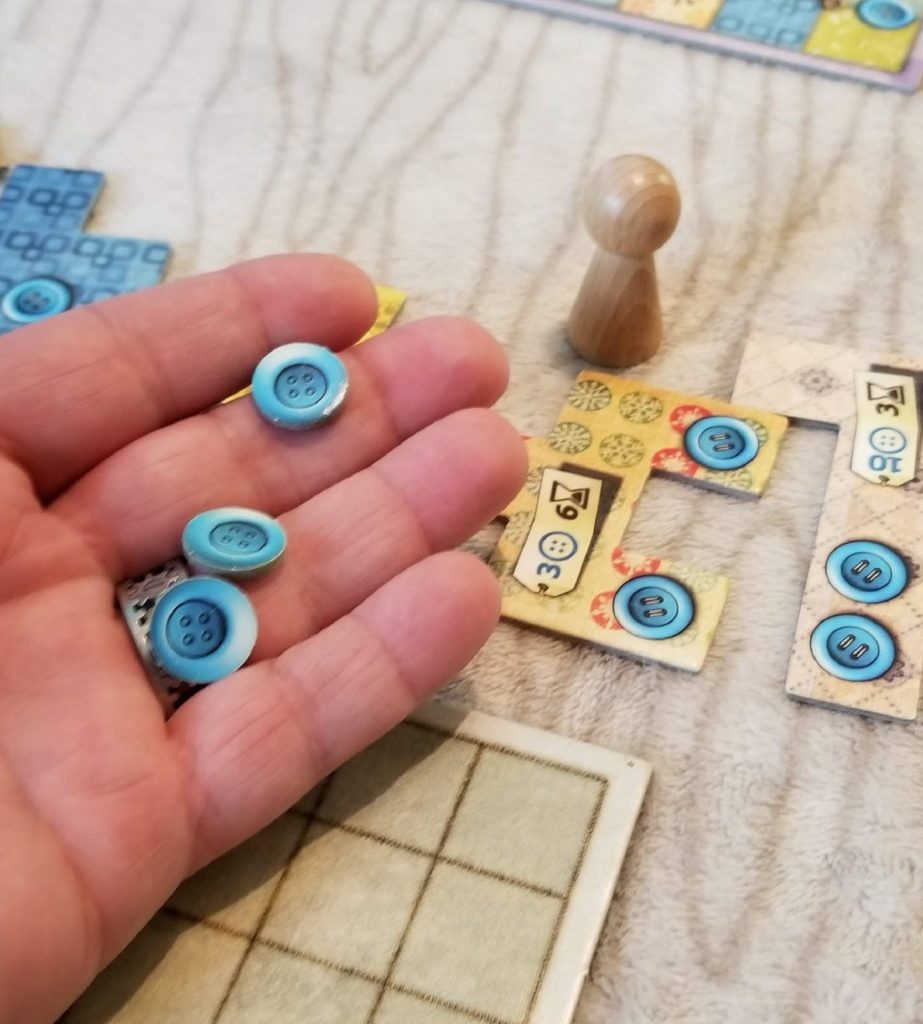 After purchasing the tile, the neutral pawn is moved into the position that the tile has vacated. Then the tile is added to your quilt board. It can be flipped and rotated any which way you like so long as it fits within the confines of the board. If the placement of the tile completes a 7×7 area on your quilt board and you are the first to do so, then you receive the bonus tile. This tile is kept with your button supply and will be worth an extra 7 points at the end of the game. The bonus tile can’t be spent in place of buttons.

Button, Button. Who’s Got the Button?

There may be times where you’re faced with three quilt tiles that cost more buttons than you can afford. The only option you have available to you in these cases is to advance your time marker to receive some buttons. In this instance you will always move your time marker into the space directly in front of the leading player and then receive an amount of buttons equal to the total number of spaces moved. Then it becomes the other player’s turn.

The other way to receive buttons is via passing one of the button income spaces. These look like buttons printed on the time track. When passing these, you receive an amount of buttons equal to the number of buttons printed on the various tiles you have added to your quilt. It may even happen that in advancing your time marker to gain buttons, you also pass a button income space. In this case, you receive buttons from both button-earning methods.

Once a player’s time marker reaches the center of the time track, their game is over. After both players have finished, the final scores are tallied. Each player earns one point per leftover button and they lose two points for each empty spot on their player board. Then the player holding the bonus tile scores an additional 7 points. When calculating the final score, I find it easiest to break down my leftover buttons into singles, place two buttons on each empty space, and then count up whatever is left over.

The player with the highest score wins. In the case of a tie, the person that reached the center of the time track first wins.

“Mostly harmless.” That was the updated entry for the planet Earth in Douglas Adams’s masterwork The Hitchhiker’s Guide to the Galaxy. It’s an entry that implies a hidden element of nastiness beneath a placid surface; seemingly peaceful and harmonious until it bites you. That is an excellent description of Patchwork. Mostly harmless.

At first glance Patchwork is an easygoing game about stitching fabric squares together to make a patchwork quilt. Klemens Franz’s usage of bright colors and bold, vivid patterns coupled with many people’s ideas about quilting being a tranquil hobby are the things that help create this illusion. It isn’t until you begin playing that you discover just how devious and cutthroat this game really is. And if that sounds like a bad thing, trust me, it isn’t. It’s one of Patchwork’s finest selling points.

One of the first things to understand about Patchwork is that it is possible to end the game with a negative amount of points and still win. In fact, with most beginners, that’s almost always the outcome of their first few games. So, right away, Patchwork pits you against yourself. Ending a game, any game, with negative points is distasteful. So, you feel an urge to play again and again in an effort to at least end the game with a positive score. And now you’re hooked.

After playing awhile, you get used to the pieces and you’re able to puzzle out your tile placements more effectively. Puzzle solved. Or is it? It’s easy to forget that you’re playing against an opponent because you’re so busy trying to figure out how to fit tiles into your own quilt. That is until they take one of the patch pieces from the time track that you were hoping to get.

And this is where Patchwork turns from a quilting circle into a fight club. Adding those patches to the time track was a stroke of genius. And in a game where every point is hard won, providing that 7 point bonus tile creates an impetus to outmaneuver your opponent. Before you know it, Patchwork becomes less about filling in your own quilt and more about trying to make it impossible for your opponent to fill in theirs.

You’ll find yourself counting their buttons before appraising the quilt tile options available to you to determine what they can and cannot afford. “If I take this tile, then the neutral pawn will move there and then they can’t afford any of the next three tiles. That’ll force them to jump past me to earn some buttons and then it’ll be my turn again. But wait! If they are forced to jump past me, then they’ll get the patch. So maybe I should jump past them instead…” Those time track patches are pure gold. Much of your game will revolve around trying to manipulate the game state so that you are able to collect them while denying your opponent the same privilege.

Like I said, it’s very devious. It’s no wonder that Patchwork was an Official Recommendation for the Spiel des Jahres. The theme is very approachable and the artwork and mechanics serve the theme very well. The rules are super simple and the rest of the game is language independent. Despite the simple rule set, the game has a lot of hidden depth. These are all hallmarks that Spiel des Jahres winners have in common. And these are all the reasons that Patchwork has enjoyed such great success and will, no doubt, continue to. Uwe Rosenberg is a visionary and a stellar game designer and Patchwork stands as one of his finest achievements.

Periodic: A Game of the Elements Review – This Game’s Got Your (atomic) Number