Friday night and you don’t know what to do? Invite some friends over for a good time of course; but do you play some games, or watch a movie? Why not both? There is a Settlers of Catan movie in the works after all. Can Tabletop: The Movie: The Show be far behind?

In this good humored piece we propose some top notch board game and movie pairings that’ll bring your friends over all the time! So dim the lights, raise the curtain, and take your buttery fingers off my games, because today we’re talking about board games and the movies they were meant for.

Terraforming Mars and The Martian 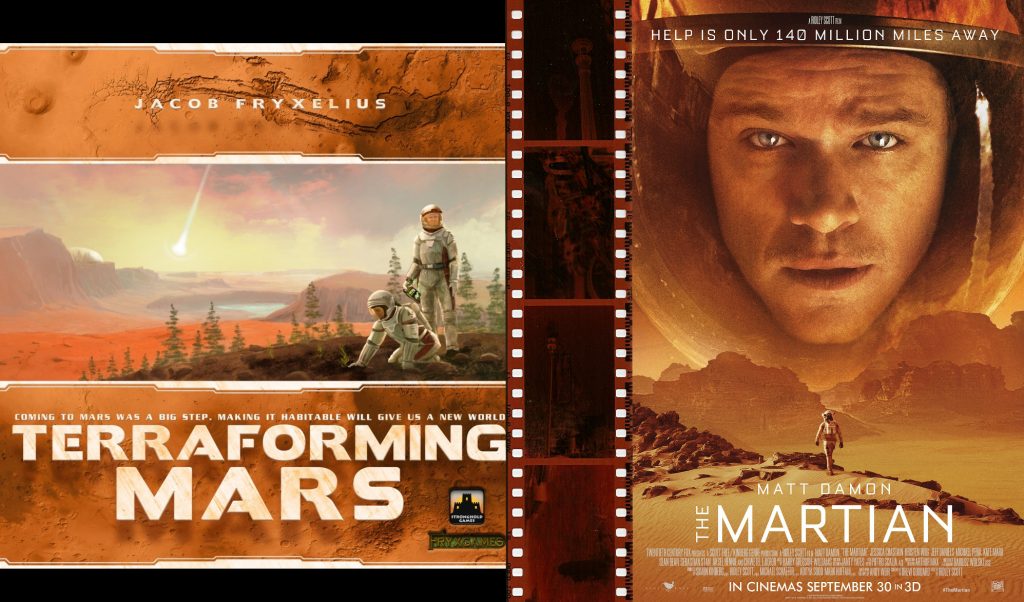 I don’t want to come off as arrogant here, but I’m the greatest botanist on the planet.

Between Elon Musk and Curiosity, Mars is hot right now (well– it’s no Venus). With the help of these two science-first pieces of art, can you make Mars habitable? Everyone’s working towards the same goal, but there will only be one winner. Don’t get left in the dust… on this planet, it’ll make you see red. Check out our review of Terraforming Mars.

Twilight Struggle and Dr. Strangelove or: How I Learned to Stop Worrying and Love the Bomb

Gentlemen, you can’t fight in here! This is the War Room.

Bring a jaded friend and your inner Peter Sellers for an evening of lighthearted fun and the threat of nuclear annhililation. Kubrik’s Dr. Strangelove rolls the same dice you will as you delve into an evening of Cold War tensions. Is it all just a big game… ? Yes. Whether you’re playing the US or the USSR, buckle in for the rocket ride.

Nothing Personal and The Godfather

Leave the gun. Take the cannoli.

Let’s keep this in the family– family game night, of course. Have you ever wanted to bust some kneecaps to get the respect you demand? Maybe not, but Tom Vassel’s Nothing Personal sure makes it fun. Bribe, stab, and inch your way up towards the coveted Capo.

Flick ‘Em Up and The Good, the Bad and the Ugly

You see, in this world there’s two kinds of people, my friend: Those with loaded guns and those who dig. You dig.

The world is full of Sheriffs, Outlaws, and everyone caught in-between. The only thing for sure is that they could all use a shave. In Flick ‘Em Up, players use their expert Crokinole moves to shoot their cowpokes  with quick-draw speed. Next time you want to catch a flick, take these two for a ride.

Double feature: Can’t decide whose side you’re on? Let Bang! decide for you— as long as you can figure out who else is on your team.

Escape: The Curse of the Temple and Indiana Jones and the Temple of Doom

You’re gonna get killed chasing after your damn fortune and glory!
Maybe. But not today.

Okay, we’re almost cheating here: if those don’t look like Indiana Jeeples, you’re not looking hard enough. Players are racing against the clock in this real time co-op.  Like any good action flick, you know the deal already: everybody gets out, or nobody does. With a length of 10 minutes, maybe you’ll even have enough time leftover to explain to the museum what happened to all those precious artifacts. 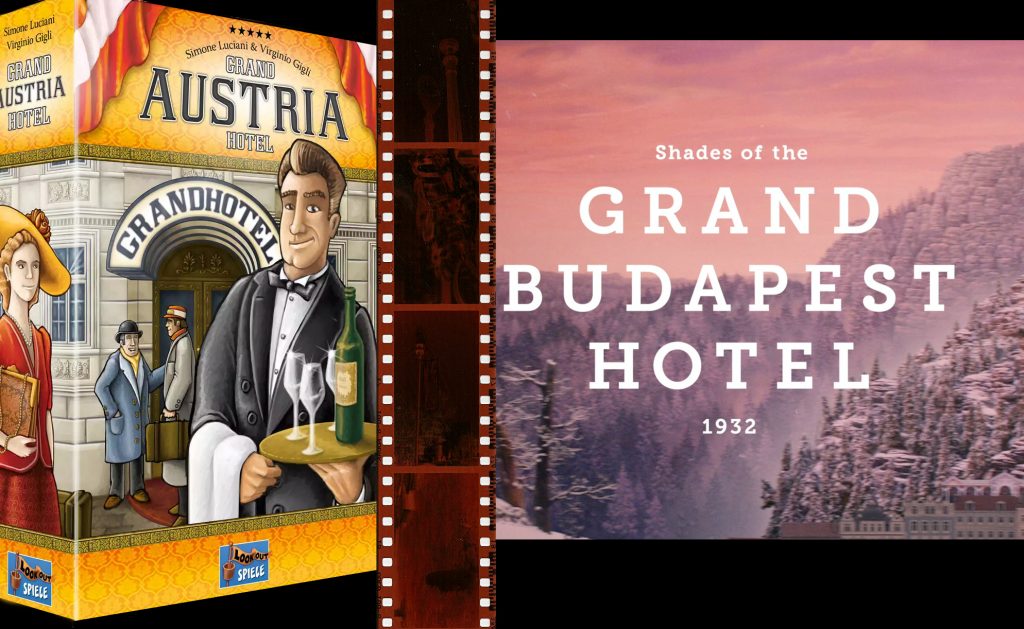 Keep your hands off my lobby boy!

It’s a lot of work running a hotel as grand as these, especially with politics as turbulent as they are. Pleasing the guests is one thing… pleasing the emperor is another entirely. With players drafting dice as they compete for guests and staff alike, only the best hotel will last. Who knew Klemens Franz and Wes Anderson had so much in common?

Betrayal and Cabin in the Woods 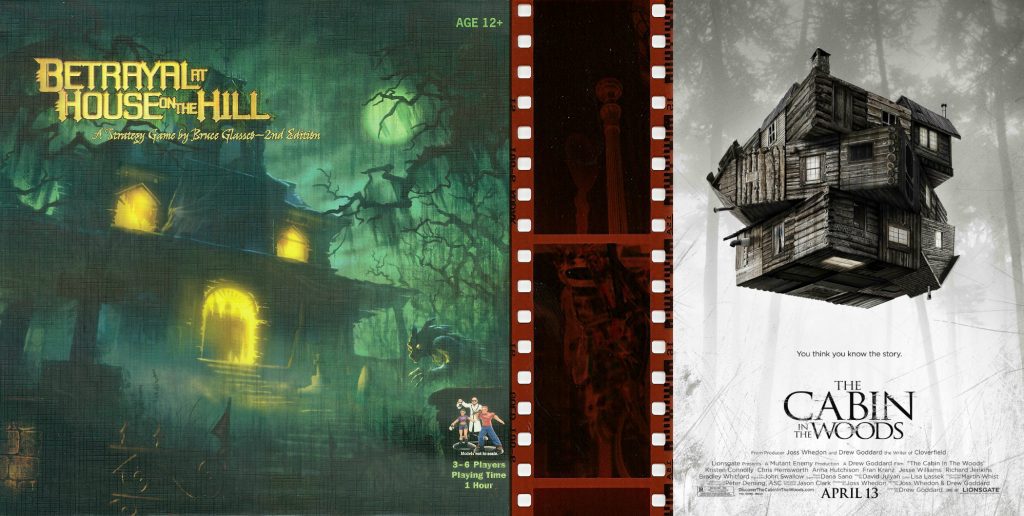 I’m sorry I let you get attacked by a werewolf and then ended the world.

How can so many horror tropes happen in one house, anyway? It must be some kind of conspiracy. In Betrayal, players enter the haunted house only knowing one thing: someone will inevitably betray everyone, and the whole thing’s going off the rails. With over 50 published scenarios (and a Legacy title in the works), it’s almost like someone’s pulling the strings behind this whole thing.

Automobiles and Days of Thunder

I’ll get you primed, painted and weighed, and you’ll be ready to go out on that racetrack. Hear me? You’re gonna be perfect.

It’ll take more than a handful of cubes to win this race. Armed with determination (and your patented slingshot move), you’ll be racing to the finish line in this dramatic build. Your car and your crew are your tools as you fight for 1st place. At the end of the day, your biggest rivals will be your closest friends. Check out our review of Automobiles.

You may not be the world’s greatest sushi chef, but this is a game you might be able to play with your 85 year-old father. Like Jiro himself, Sushi Go! celebrates the deceptively simple art of creating sushi. With a good hand and the right ngiri, maybe you too can master the craft. (Speaking of masters of their craft, you can read our interview with Phil Walker-Harding, Sushi Go’s designer.)

What board game and movie pairings would you suggest? Tell us in the comments below, or better yet, share your picks on social media with the hashtag #BoardGamesAndMovies.

Check out our “If Board Games Were Rock Bands” piece for even more board game mashup laughs.