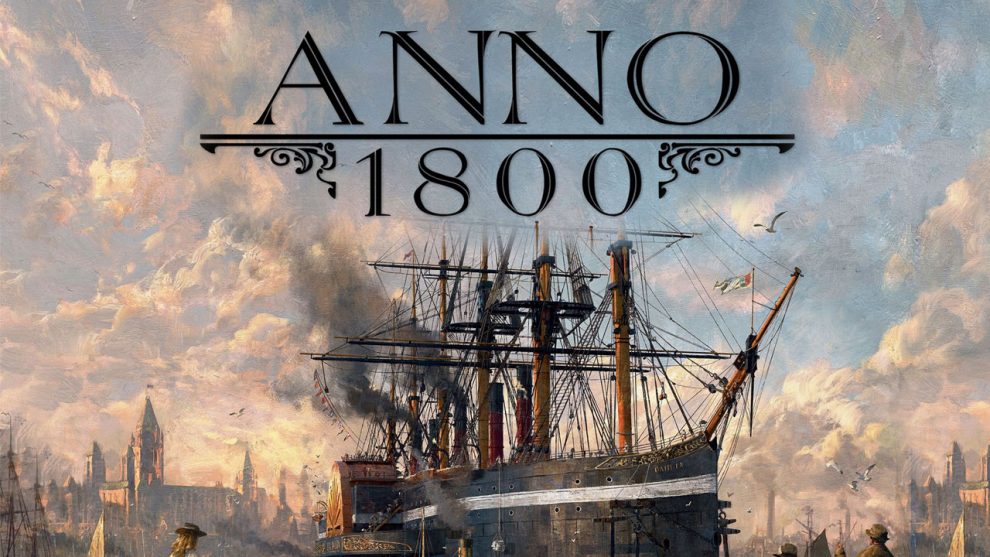 Justin Bell @justinbellsaysjustinbellsays
Add Comment
Now that the hype has died down, Justin reviews Anno 1800, the board game based on the PC game from Ubisoft!

For a good stretch of 2021, everyone was talking about Anno 1800, the board game based on the video game from Ubisoft.

Designed by Martin Wallace (the Brass games, Age of Steam, Tinner’s Trail) and published by KOSMOS (The Crew: The Quest for Planet Nine, Cascadia), Anno 1800 was a hit right out of the gate. This was certainly due, in part, to the pedigree of the team behind the game, but getting a copy of Anno 1800 took months.

Many months, as it turned out. The first two people in my gaming network who got the game paid extra to import their copies from game stores in Europe, and those copies featured German rulebooks!

I wasn’t that desperate, but then shipping woes hit again. After meeting with our friends at KOSMOS at Gen Con last year, KOSMOS put Meeple Mountain on the list to receive a review copy. That copy took a whopping 5 months to arrive.

While it took some time for the game to show up, I’m thankful that it did. Playing Anno 1800 post-hype hasn’t dulled the sheen. It’s still a blast. 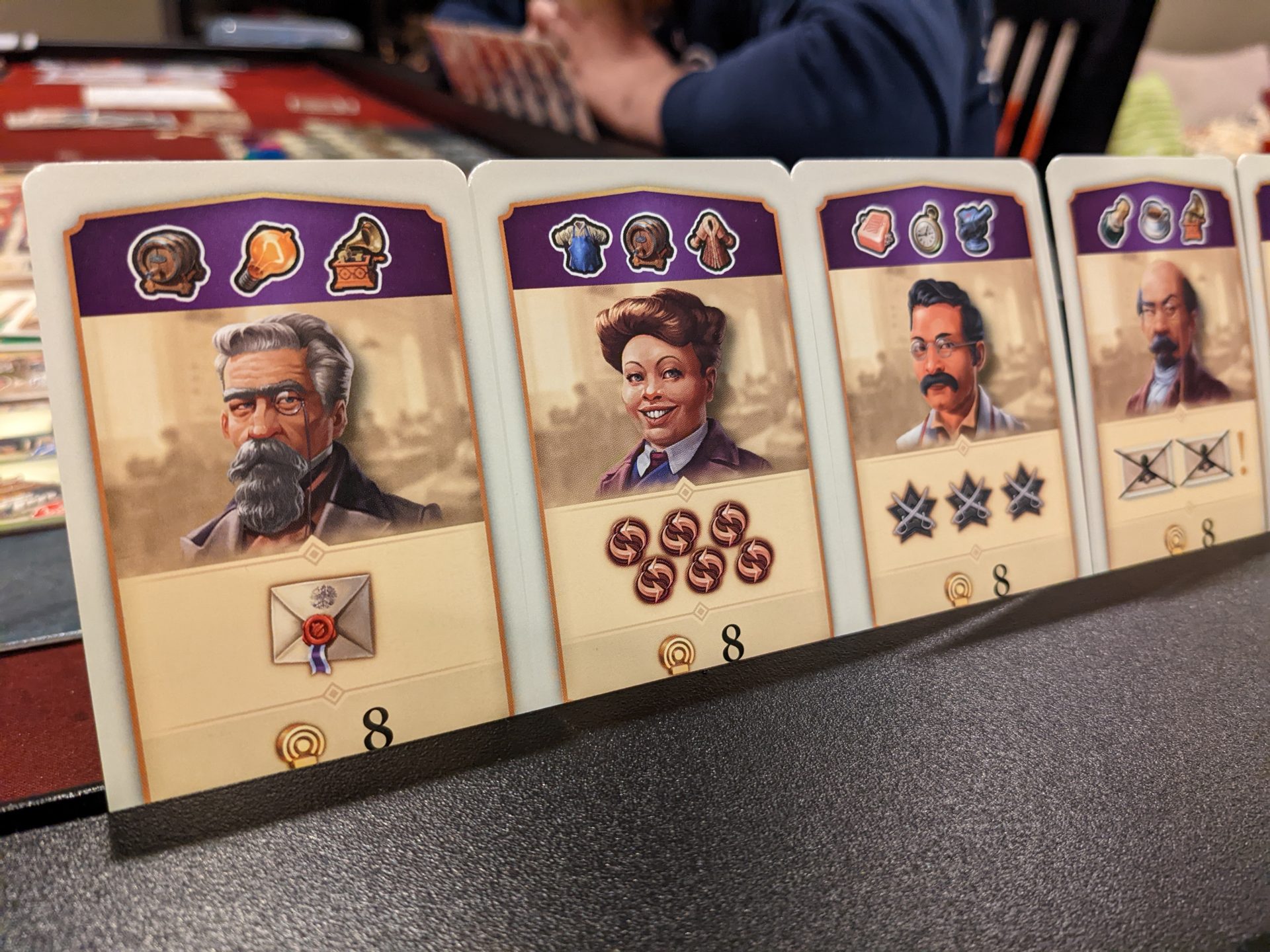 The Setup: Hire an Intern

I haven’t played the PC game which Anno 1800 is based on, but that doesn’t matter. I can already tell that if you love the video game, and you are a video gamer (I count myself in this category), you should stick with that. You’ll always be able to find an opponent—the AI!!—and set up is a lot easier than it will be when playing the board game version.

For everyone else, the bear of the setup is worth it.

If you’ve heard anything about Anno 1800, I’m sure it’s the main tile display, a massive headache that is tough to set up because each of the 35 (!!) different industry tiles has exactly one match, and one space it has to sit on, and the storage solution isn’t ideal between plays. (By “storage solution”, I mean “empty cardboard box.”)

If you’ve got an intern, assistant, younger sibling, or game store clerk who can help you out here, use ‘em. It’s worth it. Sitting down to a table where Anno 1800 is ready to go is a blast, and it lets you focus on what matters: smooth, intuitive gameplay with very low downtime, semi-cooperative play, and just enough story to set the table for the action.

A Eurogame to its core, Anno 1800 works so well for me because it does all the things you can expect, but with a couple of gameplay processes that bring me joy. Pass actions that don’t necessarily hurt, no set round structure, a wide variety of public goals available in each game, and lots of ways to score but with one main scoring mechanism which also triggers the final round.

Storywise, I think Anno 1800 sets players on an island to build a workforce, establish trade routes to the New World, and go on expeditions to find animals. I’m pretty sure there’s a need to build “exploration” vessels, which look an awful lot like warships being used to conquer distant lands. It also seems important to acquire investors who will inject capital into an ever-growing community at the dawn of—

OK, OK; you’re right. Here’s what you are really doing: 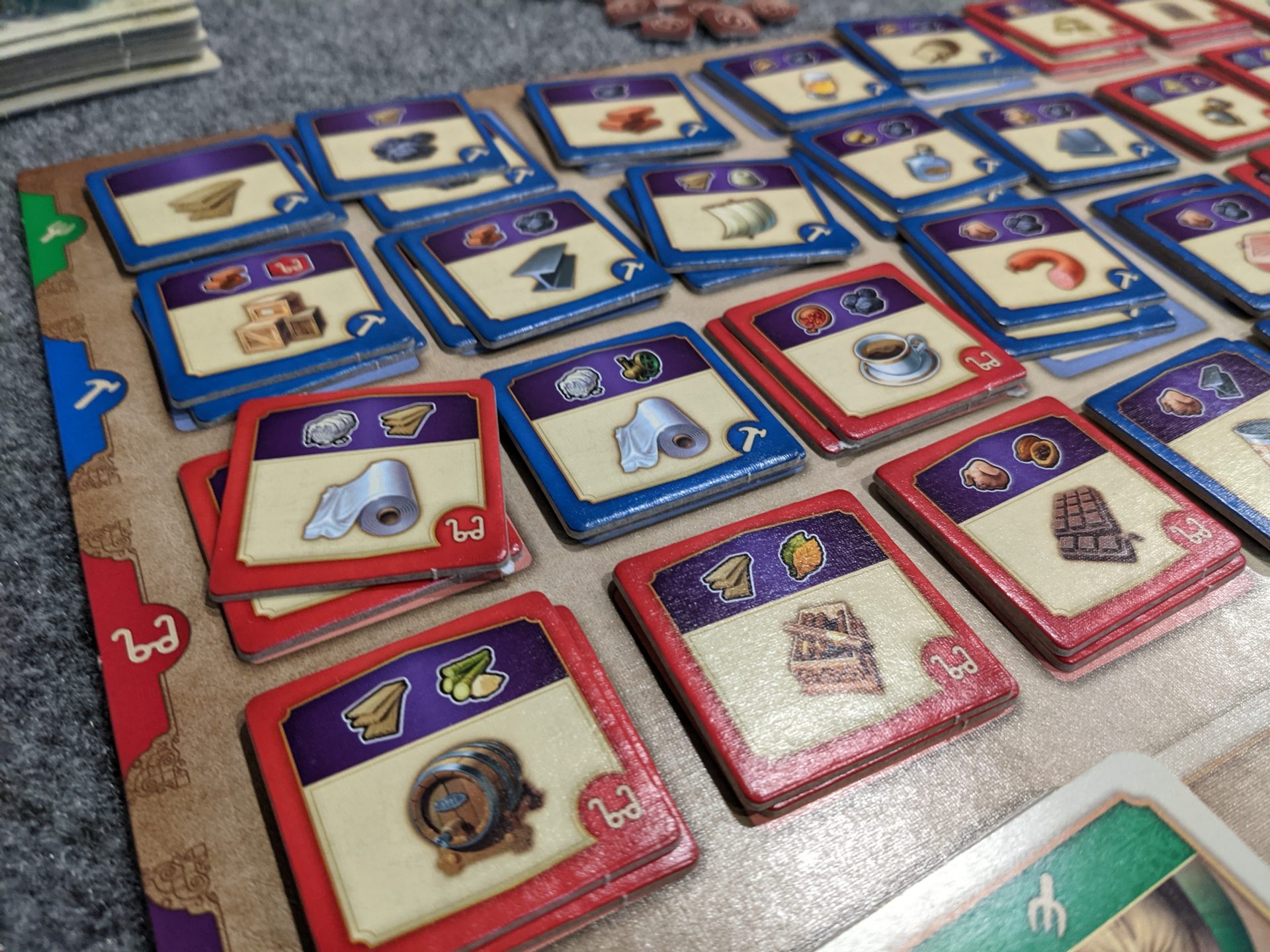 One would assume that I am being critical here. Trust me, I am not. I absolutely adore how simple this system is. It actually feels good, from turn to turn, to ‌look at the number of cubes (population, in the game’s parlance) in your supply and know what you can do with your hand of cards.

Even better? Trading in Anno 1800. It’s so simple, so friendly, and it makes so much sense. You’ll start the game with a couple of trade tokens, which can be used (whoops, “exhausted”) to get goods from another player who makes the thing you want. They get a small compensation, in the form of gold, to give you access to whatever good you need in a trade that can’t be refused.

Players are pushed to trade all game long. It speeds up play, offers a chance at better efficiency, and provides compensation to the person who was smart enough to gain access to a good which will be useful to all players over the course of a game.

The cards drive the action in Anno 1800. You’ll start the game with 9 of them, and you’ll likely gain many more from there, because each time you add population, you’ll get a card matching the type of the worker you just added to your pool. These cards can be satisfied by producing the goods listed on each card, and will score 3-8 points at the end of the game.

Each card gives you a bonus which can be used on the current or subsequent turns: more population, exploration or trade tokens, the chance to take a bonus turn, a card-trashing action to slim the hand size.

Flavor text? None in sight. Each card has a pleasant-looking picture of a person on it and a bunch of symbols.

When was the last time I took time during a game to read the flavor text on a card? Ooof, a few years ago? I play games semi-professionally and never read cards for anything more than the iconography I need to push through. In this way, Anno 1800 just admits the truth: I’m trying to play, not stare lovingly into the eyes of card flavor text.

But the cards are in charge. They are also the clock. When one player’s hand is empty, the game is almost over; finish the round and play one extra round, then add up those points.

Sure, there are other actions to take. You can expand the size of your player board, or add tiles from the “New World” which allow for you to trade for special items used to make certain tiles come to life. You can go on expeditions to try to score end-game points with your population. Five public goals are available each game, so steering your actions towards meeting those conditions can be useful. If you don’t like your cards, you can bury up to 3 cards on a turn to top-deck 3 new ones from the proper decks.

But mostly, you are going to be working on your engine, to produce the right stuff to get those cards out of your hand. You can work at your own pace, until you can’t, because your neighbor just emptied her last 5 cards in the blink of an eye thanks to a daisy chain of actions. 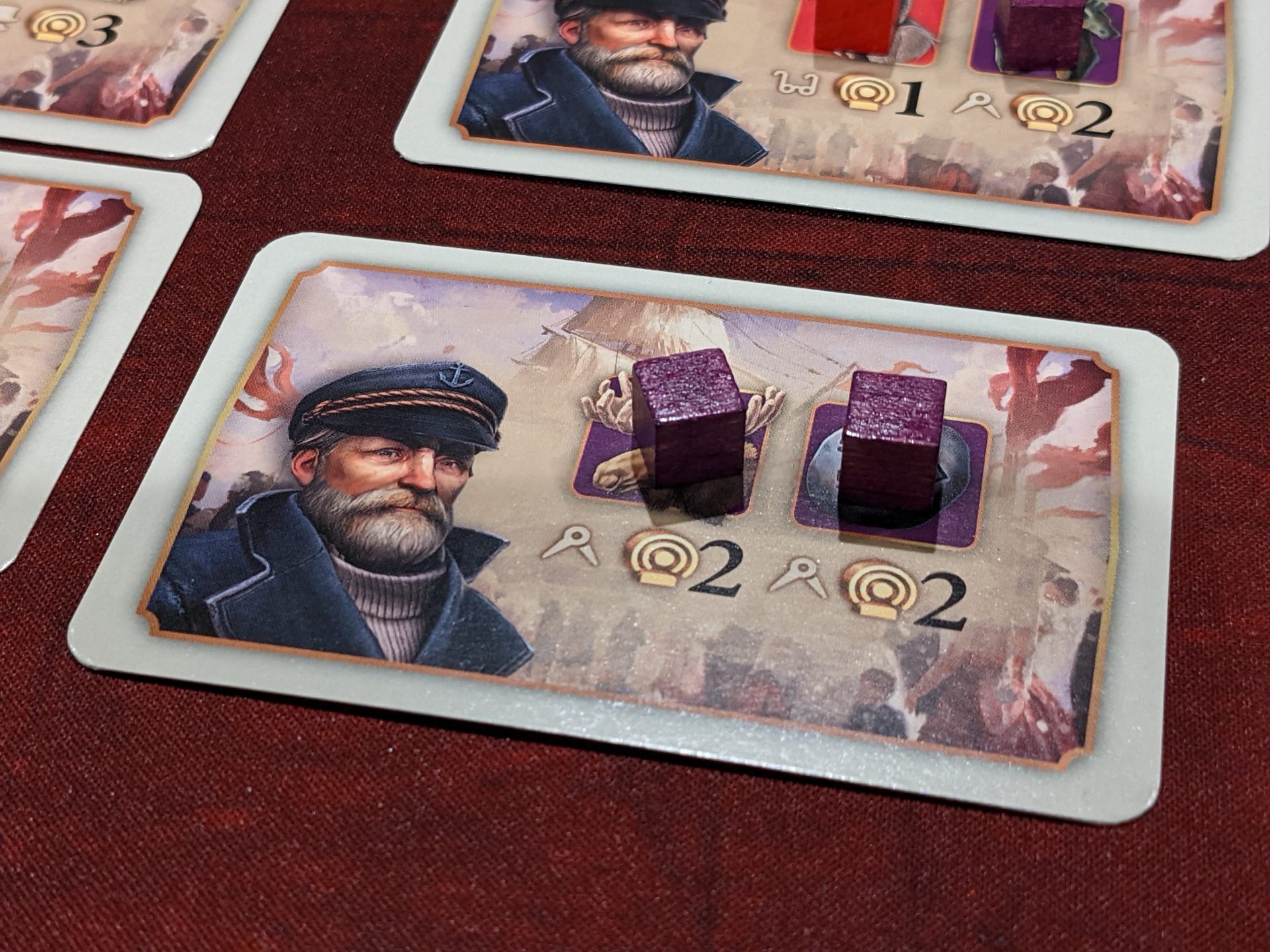 My buddy Kev told me about his first play of Anno 1800, on Tabletopia. It sounded like it took forever. That’s because it did: 3 hours for his first 2-player game.

What happened to Kev is what happens to a lot of first-time players of Anno 1800: they spend too much time building up their engine, instead of just speeding towards the ending by fulfilling their hand of cards.

This is particularly true when you analyze which types of cards players are trying to score. Spending time on meeting the requirements of a card is one thing, but when that card’s rewards are more population cubes, that just means you are adding more cards. That might work out, unless another player is playing cards only to get non-population rewards.

Now, I like this system. You could stay and play Anno 1800 as long as you like. You could win a game with a score in the 50s (I’ve done it) or you could win a game by scoring 100+ points (I’ve done that, too), or you could just sit back and roll around in the mud with your handsome array of property. Add a few boards to your initial island by going to the Old and New World. Spend a lot of time turning red cubes into purple cubes, or purple cubes into blue cubes (those investors we spoke about earlier).

Or, you could race to get cards out of your hand. The variable length of Anno 1800 is a feature, to me, a net positive that doesn’t necessarily dictate who will win the game. My first game of Anno 1800 took just over an hour with 4 players. That’s because I got lucky, with lots of cards that lined up with goods I could produce mainly on my own.

That also means that Anno 1800 might be a little too luck-based (which is to say, any luck at all) for the average Euro lover. All good to me, because I like a little luck in my games. Like life, nothing should be 100% predictable. 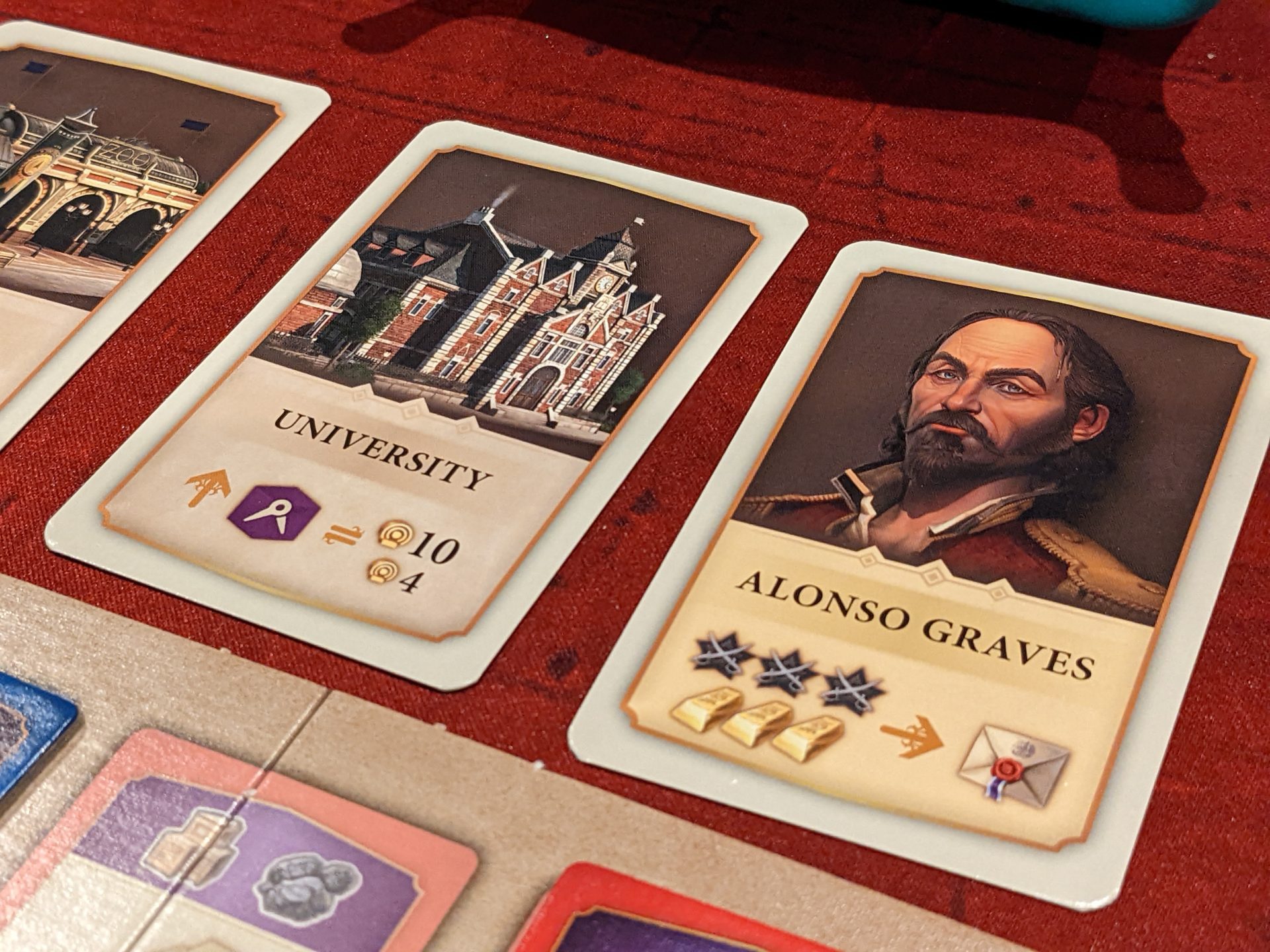 Anno 1800 is a pleasant mid-weight Euro experience that works for my style of play. I think all the cube pushing is slick, and makes for a game that is so straightforward that I might try to teach this to gamers outside of my normal strategy gaming sessions.

There’s no getting around it, however the setup is a bear. Enough of a bear that there have already been times when preparing this review where I looked at the box and had to ask myself if I wanted to set it up by myself. That’s important when games are fighting the mental hurdle for table time; some games give me the punch of a fun experience without the headache of a difficult setup/teardown.

But I’m just going to work harder. Anno 1800 is fun. Now if you’ll excuse me, I need to post that job listing for a part-time gaming intern! 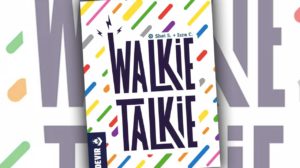 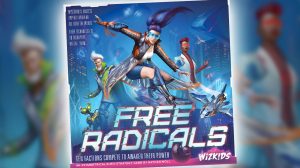 A board game with 10 games inside! Justin reviews Free Radicals, a new release from WizKids! 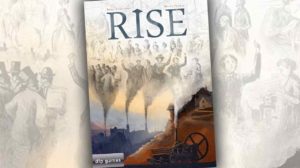 Join Justin for his review of Rise from Capstone Games! 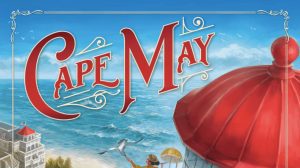 Join Justin as he visits the seaside in his review of Cape May, the 2021 release Cape May from Thunderworks Games!