My Love Affair with Splendor

Within minutes of my first game, a broad smile covered my face. I could see the simple, elegant engine building mechanics of Splendor at work and how the stacks of cards meant each game was going to be different.

I knew Splendor was going to quickly become one of my favorite games.

Splendor is not only a game I’ll play anytime and anywhere, it’s also one of my go-to gateway games. It’s easy to teach and learn, and never fails to show the people new to the hobby just how good modern board games can be.

Click here to learn how to play the game

Set Up and Game Play

Splendor is made up of three decks of cards, 40 poker-sized chips, and a dozen square pieces of cardboard. That’s it. But, trust me, that’s all it needs.

The goal of Splendor is to end the game with the most points. Points are earned by acquiring cards with a numerical value in the upper right corner. If you get enough of the right cards, you can also claim one of the square pieces of cardboard worth additional points.

To set the game up, shuffle each of the three decks of cards separately and then lay four cards of each color out in a row, face up.  Green-backed cards go on the lowest level; yellows above that; blues above that. Each remaining deck is placed to the left of their respective rows. 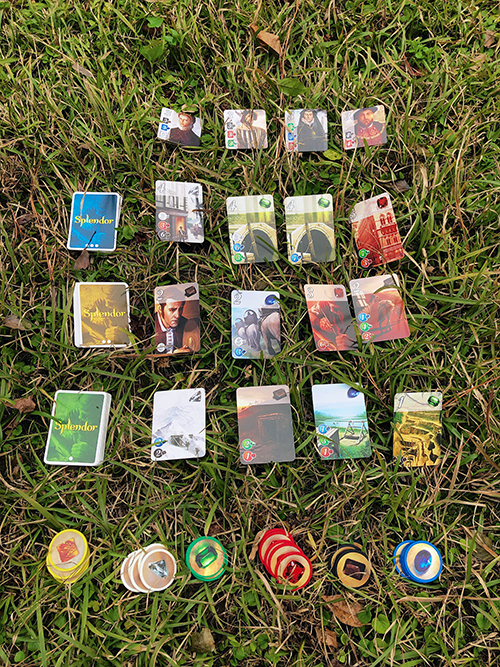 All elements of the game fully set up.
Also, for the visually & trivially astute, the name of Warren Beatty’s first film.
And, yes, I set this up in my backyard in mid-December just for the visual pun. Please leave comments of appreciation!

The square cardboard pieces are Splendor’s nobles. Shuffle them, then place a number equal to the number of players plus one above the three rows of development cards. These nobles each list the specific numbers and types of cards required to claim them. The remaining nobles are put back in the box and will not be used.

Nobles are each worth three points, but the number and types of development cards you need to attract them are each different.

The lower left corner of each development card shows gemstones required to claim that card.  The lowest level cards require the least gemstones, but may not be worth any points. The yellow middle cards require more gemstones and can be worth between one and three points.  The upper level blue cards can require up to fourteen gemstones but are worth up to five points. 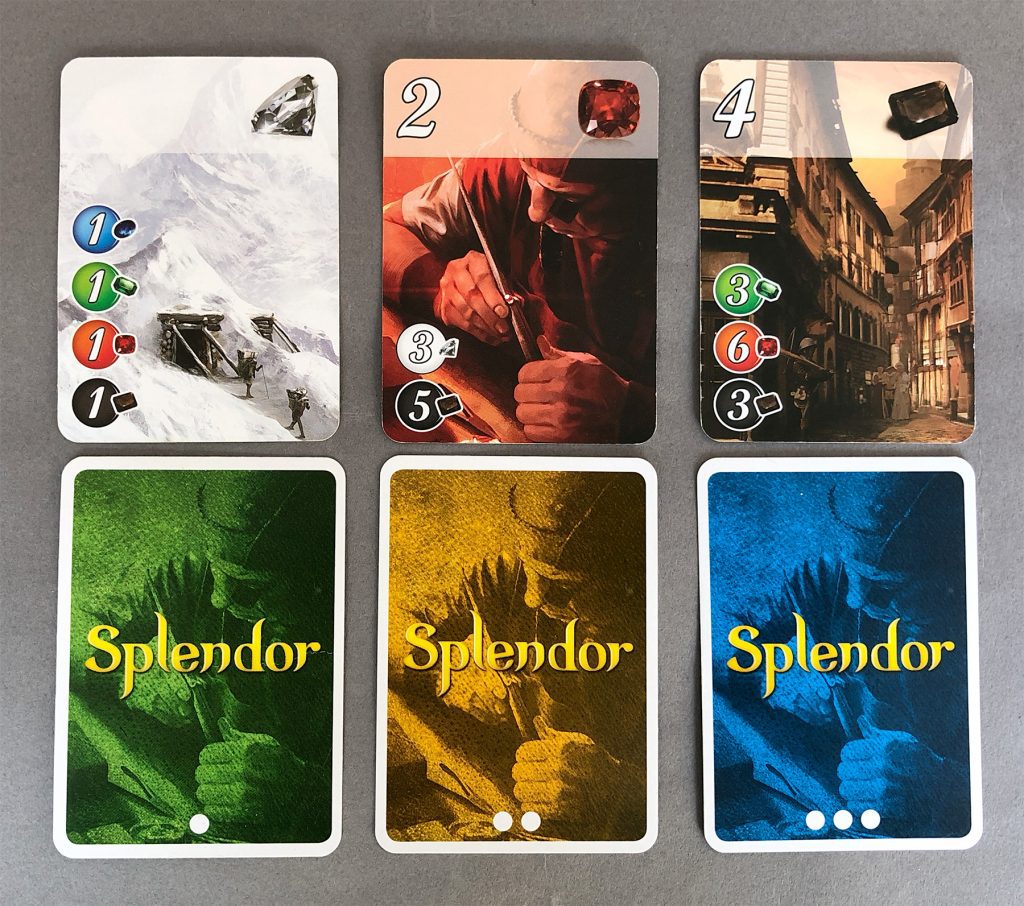 The three levels of Splendor cards

The poker chip gemstone tokens are placed below the rows of cards. The number of tokens depends on the number of players. 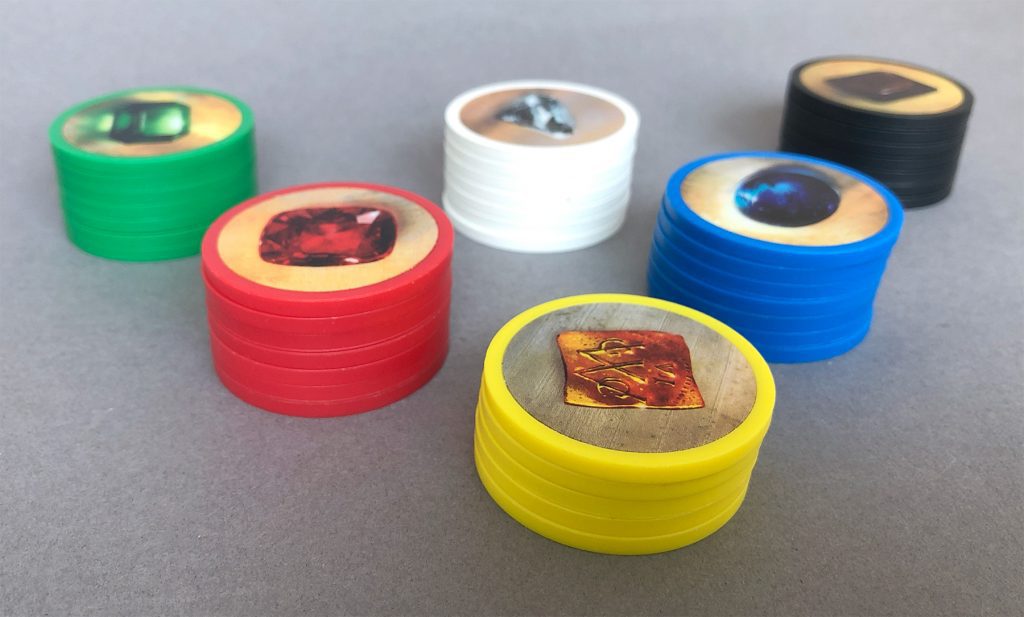 The first edition gemstone chips are both beautifully colored and have a wonderful heft to them.

On a turn, players take one of three actions:

Whenever a card is claimed, it is immediately replaced with another card from its colored stack.  Should the stack run out, no additional cards are added.

Your first turns will be collecting gemstone tokens to buy development cards.  For instance, the card in the image below requires three green gems to buy. 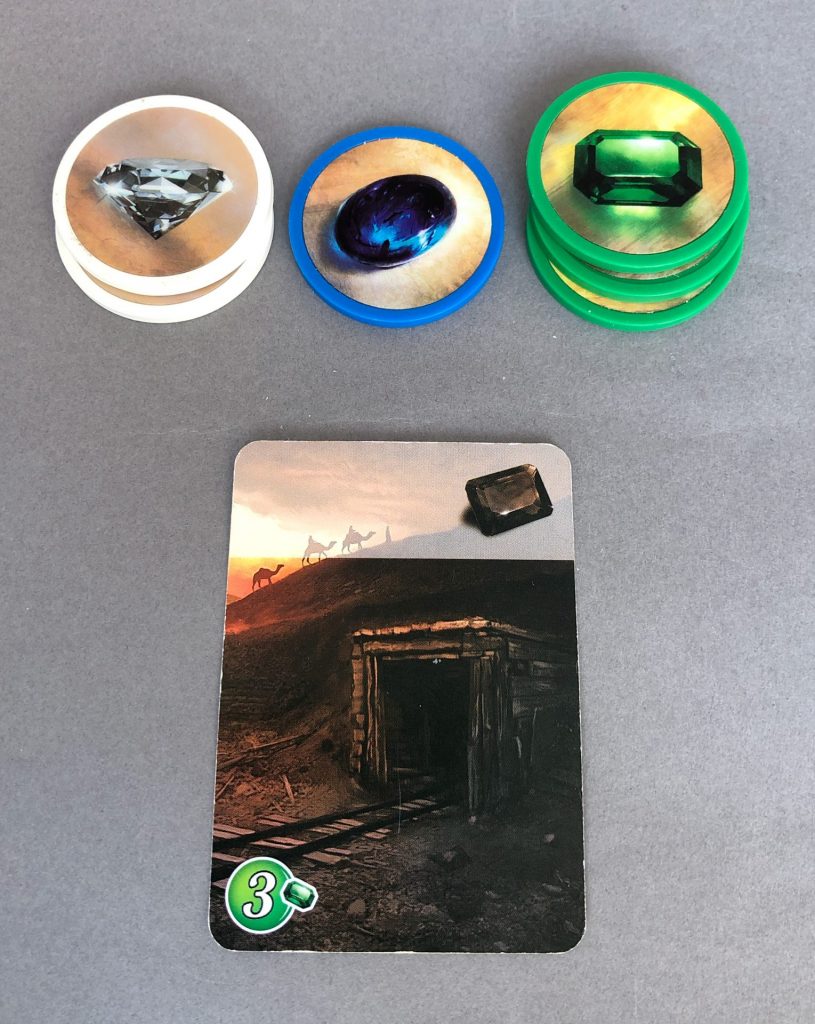 This player has three green gemstone tokens, two white, and one blue.  On their turn they can trade in their three green tokens (keeping the white and blue tokens) and claim this card.

Although there is no number in the upper right corner of this development card — meaning it is not worth any end-game points — it still has value. Take a look at the black gemstone in the upper right corner. Just as this card becomes part of your inventory, so does the black gemstone. It becomes part of your personal ‘engine’ for claiming other cards. Now, whenever a development card requires black gemstones, this card gives you a discount of one.

For instance, consider this card. 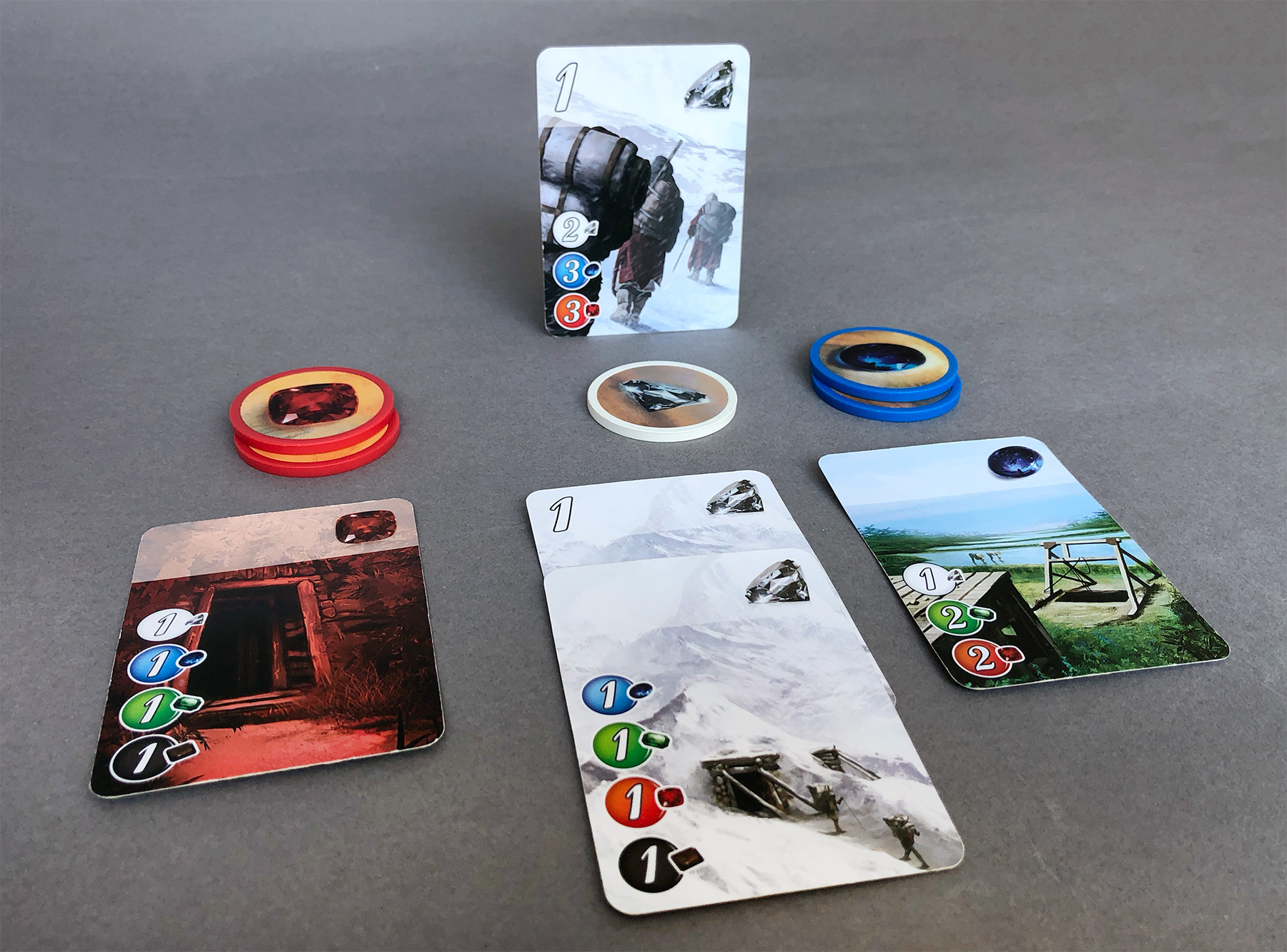 Clever players will start the game by looking at the nobles and the number of colored development cards necessary to claim them. These tiles are worth an additional three points and can be claimed at the end of your turn, providing you have the requirements they seek.  Since Nobles can only be claimed by the appropriate colors and numbers of development cards you hold (gemstone tokens do not count), planning your strategy around those development cards can be decisive.

The first player to reach 15 points triggers the end of the game.  Any players who have not yet had a turn in that round get to complete their turns.  The player with the most points wins the game.

What Makes Splendor So Good?

My weekly gaming group leans towards heavy engine-building games that take hours to play (think Terra Mystica). Splendor takes the complexity of those games and condenses it into a 20-30 minute experience. None of the interesting, involved decisions of the heavier games are lost, nor the satisfaction of seeing a series of turns culminate in a development card that also claims a Noble to win the game. And yet, the basics of the game are so easily learned that Splendor can be enjoyed by new players on their first game.

Of the many, many games of Splendor I’ve played, none have ever played out exactly the same.   Thanks to the shuffled cards and the blind choice of the different Nobles, each game you play will be different. Some basic strategies will likely remain the same, but given the randomness of the development cards that turn up, no single strategy will work every time.

Speaking of strategies: going after Nobles can be essential to winning Splendor, so starting to build your mining engine with one or two Nobles in mind is common. Along the way, though, you’ll need to balance offensive play (buying the cards you want) and defensive play (buying or reserving a card someone else is also going after). Or maybe you’ll try hoarding all of a single color to control what other people can and cannot buy.

Splendor is mechanically beautiful in its simplicity, but its components are quite nice as well. It’s easy to play Splendor several times and only notice how great the gemstone poker chip-style tokens feel (granted, this is only true of the earlier editions; later editions come with lighter weight tokens). However, take a moment to appreciate the artwork on the development cards.  The painted appearance of the streets, ships, mines, and artisans make this a truly beautiful game to play.

As anyone with a collection of board games is likely to tell you, not all game inserts are created equal. The best game insert I’ve seen, hands down, has been Lords of Waterdeep. This was an insert designed by board game players. It has easily accessible areas for cards and angled slots for the tokens for each faction and city areas. Keeping these contained in the box and removing them is elegance in design.

Unfortunately, this can’t be said for Splendor. 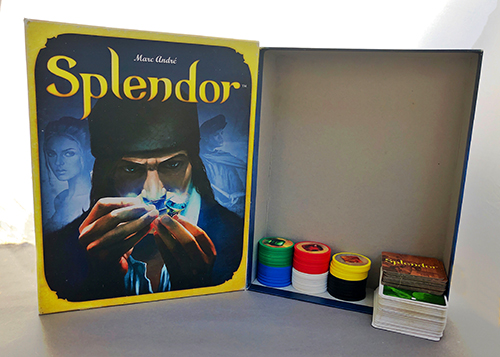 You could fit another five or six sets of Splendor game pieces in this box.

Not only is there WAY too much wasted space in this box, but if you store your games up on the edge like books, as many people do, the tokens and Nobles invariably slide out of their meager holding areas. This creates a mess that always takes an annoyingly long time to clean up before any game can start.

It really is frustrating.

Do not let the simplicity of Splendor fool you. Its brilliance is in the depth the game possesses in relation to that simplicity.

Within minutes of teaching the game to new players, eyes narrow as they study the board. Like me, they quickly learn to appreciate the tricky decisions that must be made and soon relax into the ebb and flow of changing strategies as other players claim the cards they were after.

Although Splendor is more of a light-to-medium weight game, it’s one that my group often turns to when we have an extra 20-30 minutes at the end of the evening. There’s something wonderfully satisfying about a game that everyone knows, where the setup takes place wordlessly, and the games are always challenging and fun.

I am an unapologetic Splendor fan. This game is so minimal yet so deep and clever that I wish I could play it again for the first time just to re-experience that incredible sense of wonder I had at just how good it is.

Now, if there were only a version of Splendor that truly appealed to the discriminating gamer in us all.  Hmmm…

By day, I'm a mild-mannered IT Manager with a slight attitude.  By night I play guitar, board games, watch British TV, and actively avoid writing my next novel.  My wife and I live near Raleigh, NC and are staff to five fine cats. I love abstracts, coop games, and deep games with lots of interesting choices.  And despite being a DM, I have an inherent dislike of six-sided dice.