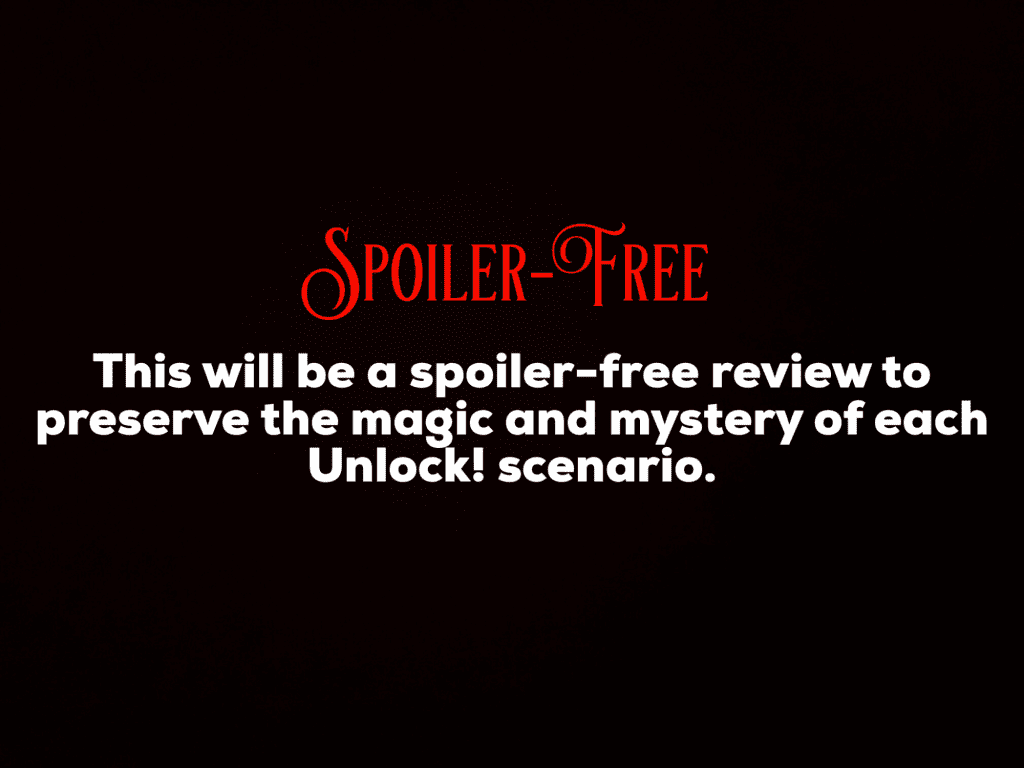 Unlock! Secret Adventures consists of the newest games in the Unlock! series: A Noside Story, Tombstone Express, and The Adventurers of Oz, which were released this past June in English. In each of these scenarios the focus is on completing an objective and not so much on escaping a situation.

Hello? Do you hear me?

Significant Changes: This scenario includes 66 cards instead of the usual 60. This is also the first Unlock! game that suggests players manipulate cards in such a way that the game is no longer reusable.

A Noside Story follows-up the shenanigans of Professor Noside (and James the Mouse), characters first introduced in Unlock! Squeek and Sausage. That means for 60 minutes, you get to listen to the awful app music from that scenario again here. Before you think about muting your device or the app, think again because A Noside Story utilizes the app unlike any other scenario. Other than being forced to listen to the annoying background music, the app integration is incredible. This is the first escape room board game where I have seen so much interaction between the app, its puzzles, and the players– and it’s fantastic. Another new addition to this Unlock! scenario were the Penalty cards which consistently featured flavour text relating to the puzzles in the game (and some which offered a funny way out of being penalized).

A Noside Story is comparable to Squeek and Sausage with its theme, the difficulty of the puzzles, the inclusion of random and unnecessary puzzles, and the use of hidden objects. Most puzzles had real-world solutions and didn’t involve much logic or deduction. I mentioned one of the significant changes in A Noside Story is the destruction of some components. Until now, Unlock! has taken pride in being reusable, unlike Exit: The Game. This one puzzle is still solvable without damaging anything, but it will require you to be a little more creative.

My final note: beware of the unexpectedly complicated speed Machine. Once you start it up, there is no stopping until you find the solution– and you must do it fast. 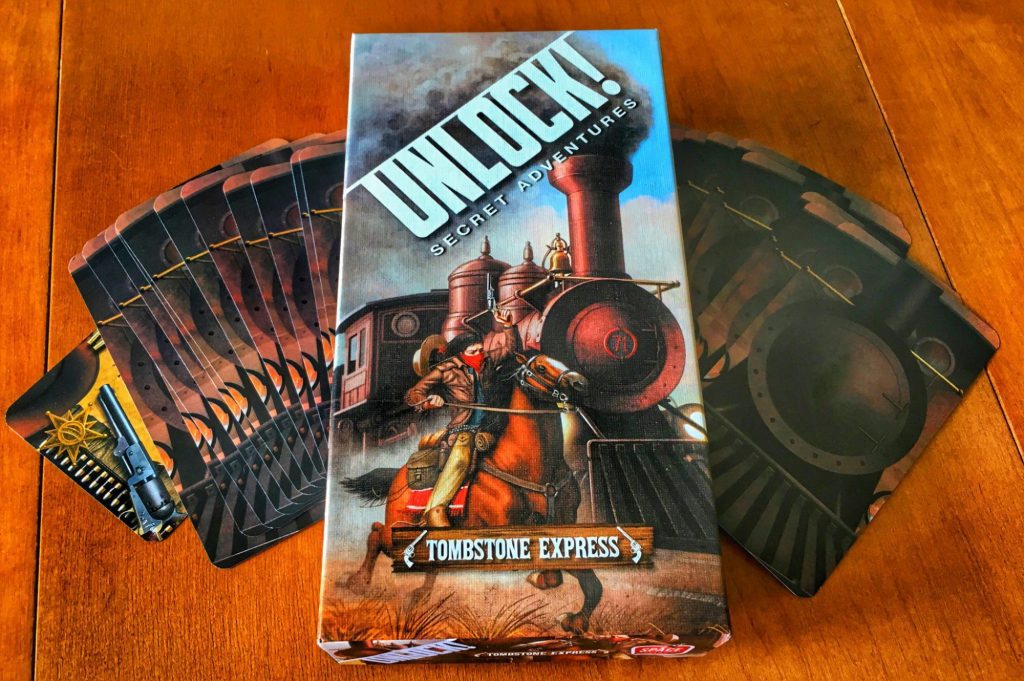 Significant Changes: Along with the cards, there are other items included. In this scenario the app timer counts up (instead of down) because you are given a strict 60 minutes to solve. This is different from other Unlock! scenarios which let you continue beyond this time.

I had high hopes for this scenario because I found the theme intriguing and I liked the strict time constraint. Like A Noside Story, there is a lot of app integration in Tombstone Express and it is generally well-implemented. There were, however, times when the app would interact with us, but we were so focused on solving puzzles that we wouldn’t notice right away. I would have preferred there be an alert or something more obvious and clear. This scenario is very text heavy and because of that I think the puzzles suffer. Tombstone Express focuses on building a cool narrative more than it does on challenging puzzles. We only solved our first real puzzle after reading many flavour text cards that then just cluttered the table. The designers succeeded in creating an interesting story (even with its plot holes and loose ending), but it feels unfair to call Tombstone Express an escape room game.

What about the few puzzles that were in the scenario? Well, I wasn’t a fan. Many “puzzles” depended on how you, the sheriff, interacted with other train passengers. Do you show your gun or your badge when interrogating them? Thematically this was interesting since it felt true to what real-life responses would be, but it wasn’t challenging. Tombstone Express has an American theme and as such, there were times where we (Canadians) weren’t familiar with some of the lore. It didn’t break or ruin the scenario, but it did result in us getting penalized on an important puzzle. While some puzzles favoured Americans, others favoured those who were musically inclined. Finally, my biggest puzzle complaint was a smoke puzzle/Machine. How you use the smoke with the Machine (in the app) affects how the scenario will unfold for your group. However, there was no indication that we did anything meaningful with the smoke while we played. So we went through the scenario returning occasionally to the smoke Machine and trying another combination, hoping to achieve a result– and we never did. My fix for this frustrating situation is simple: once the smoke Machine is used and the effect is locked in, deactivate the Machine or prompt with a message in the app saying it’s already been completed. In this way, players will understand when their actions actually change the direction of the scenario.

Tombstone Express is among the first scenarios to introduce new items to the Unlock! system. Here, the use of the items weakens the gameplay experience because it feels too much like a gimmick. I didn’t dislike this scenario, but I did feel disappointed by its design overall.

The Adventurers of Oz

Your eyelids are heavy, you briefly fall asleep, when all of a sudden, you are woken by the barking of your dog, Toto. The walls of your house are shaking: no doubt, Dorothy, you are in the eye of a tornado and you fly away, far far away from Kansas! 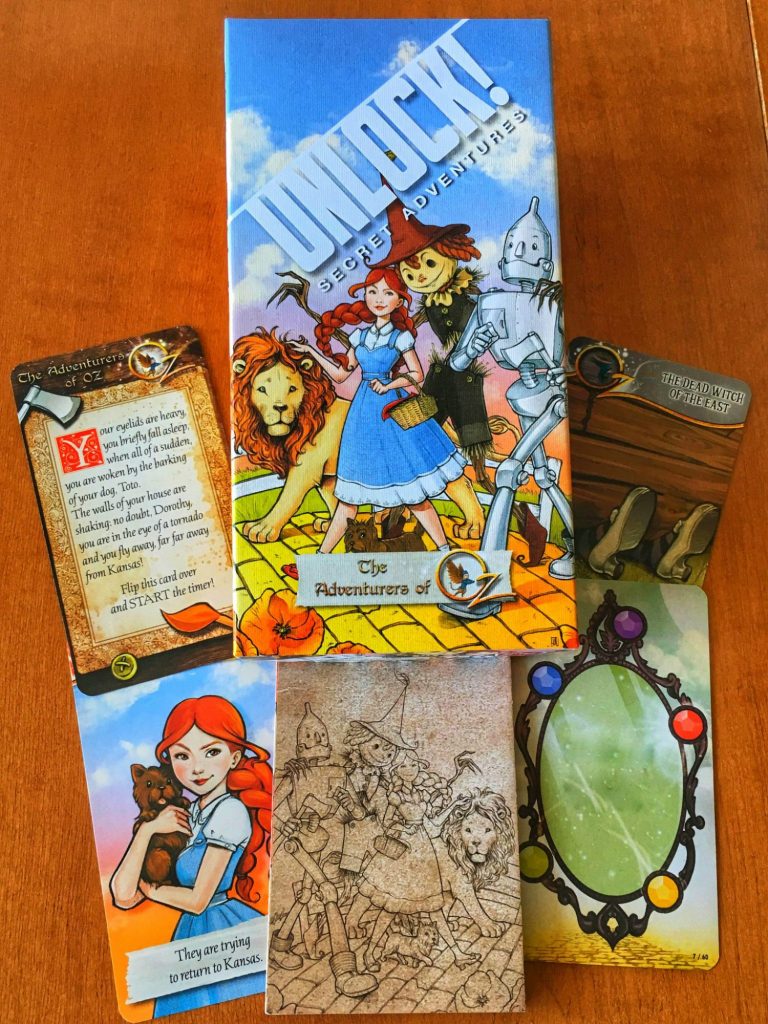 Significant Changes: Along with the cards, there are other items included. Players are given 90 minutes instead of the usual 60 to complete the scenario (even though 60 is indicated on the box). In the app, players are not given the option to turn off the automatic help for hidden objects.

This was actually the third Unlock! scenario I ever played: the first was Squeek and Sausage and the second was its follow-up, A Noside Story. I wasn’t captivated by either so I was hesitant to fly into Oz. I didn’t care for the theme, I never watched the movie, or read the book so I was surprised by how impressed I was with The Adventurers of Oz. The theme and the story worked well with the puzzles and it really felt like I was adventuring. The puzzles were quite complex and logical, which felt all the more satisfying once I found a solution. For those familiar with the story, there are points where you will get through a little more easily than those who have no knowledge. Thankfully, anything you need to solve a puzzle is found in the game itself, but it may require a little deduction.

The Adventurers of Oz also uses (included) items along with the cards to solve some puzzles and, unlike Tombstone Express, they worked much better with the story and made more thematic sense.

I really liked how this scenario had two endings. The first, standard ending is one players will receive if they complete their objective, but there is a second ending that gives players an extra challenge to go beyond the primary storyline. I have to admit that I was rather unimpressed with Unlock! after my first plays, but this scenario restored my faith in the system. The Adventurers of Oz is my favourite of the 9 games and it is the reason I chose to go back and re-explore the other Unlock! scenarios that came before it.

Similar to The Tonipal’s Treasure, my experience with the various Unlock! scenarios has been a bit of a roller coaster ride. There are scenarios I love, some I hate, and others where I fall somewhere in between. What I have found most troubling about Unlock! is its lack of consistency. Some games are well-designed and thematic, while others need more work. As a result, I’m never quite sure what kind of experience I will get when I begin to play. Three more scenarios will be released later this year as part of the Unlock! Exotic Adventures series and I’m not yet sure whether I will play them. On the one hand, I was really impressed with the unique, innovative elements added to the Secret Adventures (Noside, Tombstone, and Oz) so I’m hopeful this is the future direction of the Unlock! series. On the other hand, the scenarios have been so inconsistent that I’m still reluctant to blindly jump in to another three adventures. I may just have to allow myself to be pulled into the Boogeyman, Arabian nights, and dinosaur themes, cross my fingers, and hope for the best.