This piece will review the next 3 games in the Unlock! series and will not go into detail on how to play Unlock!. If you are unfamiliar with the system, read our review of the first games in the series to learn how to play and get the most out of your Unlock! experience. 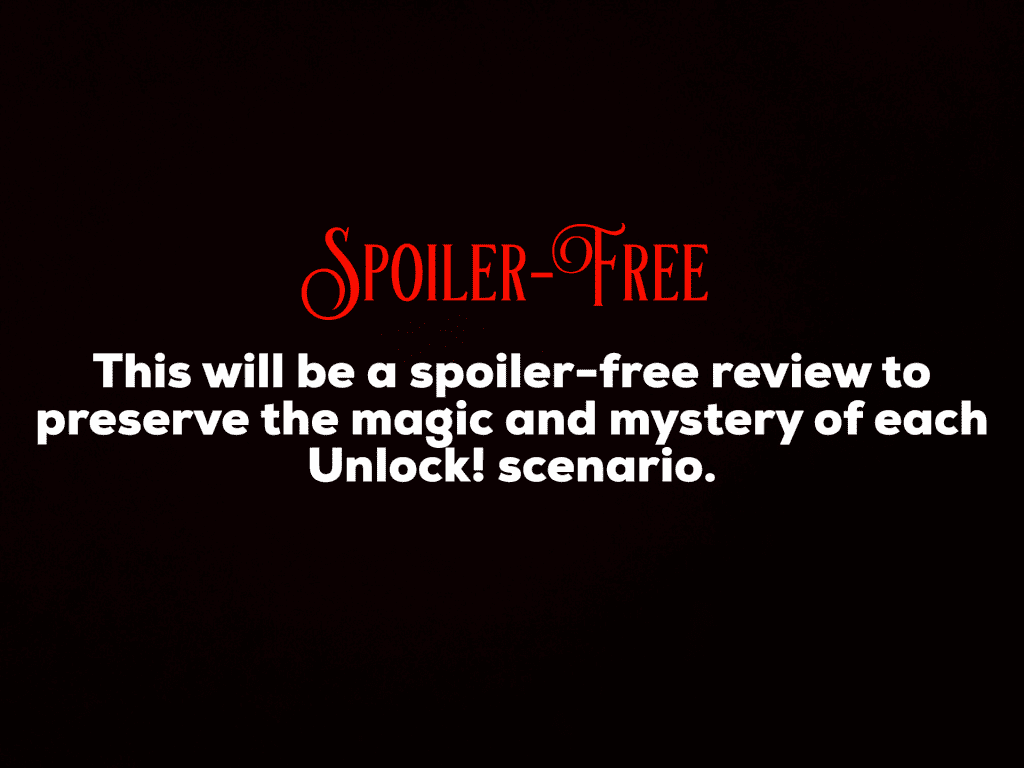 The next 3 games featured in the Unlock! series (The Night of the Boogeymen, Scheherazade’s Last Tale, and Expedition: Challenger) promise to take players to exotic destinations as they solve puzzles and try to complete an objective. Each game in the Unlock! Exotic Adventures series also introduces new elements to the experience, many of which other escape room games have yet to incorporate. 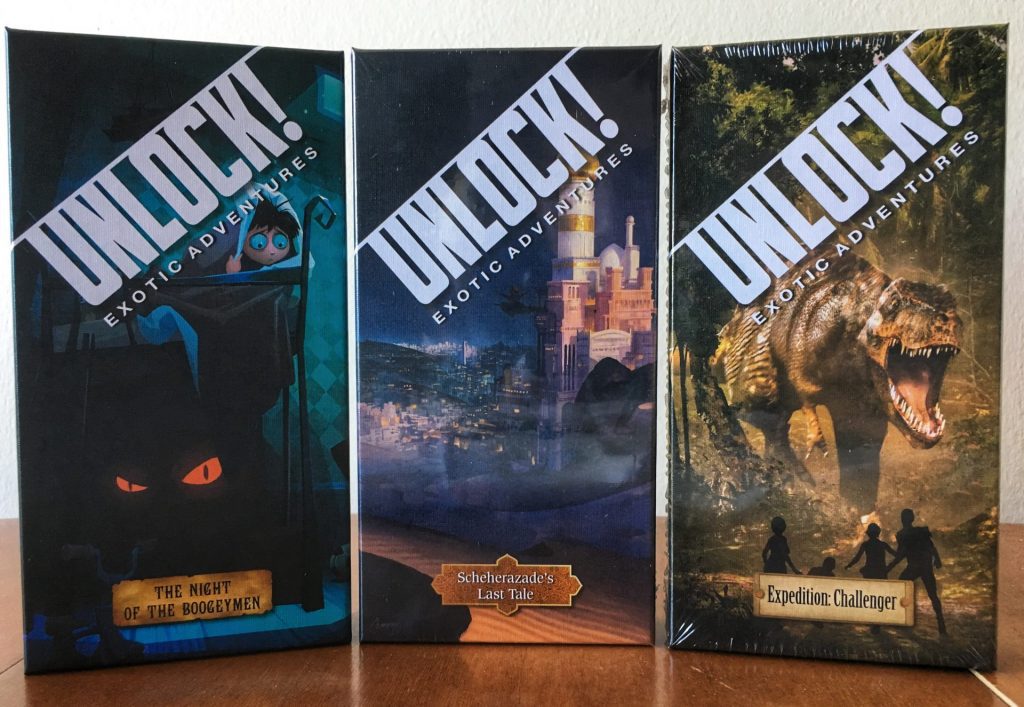 The Night of the Boogeymen – Don’t Look Under The Bed

Little William has been having restless nights recently. The poor child has been attacked by nightmarish monsters: the boogeymen. Under the cloak of darkness, you open William’s door to look for the monsters.

Significant Changes: Along with the usual 60 cards, there are other items included in the box.

I played The Night of the Boogeymen first out of the three scenarios because I was drawn in by the artwork; there is something about the style and the cool colours that just spoke to me. I feel I made the right choice too because this scenario was fantastic and quite thematic. In your fight to help little William in his plight, the boogeymen introduce something new to Unlock!: constraints. Each constraint is unique to the boogeyman, its power, and the kind of monster it is. This makes the gameplay in The Night of the Boogeymen more challenging and a little more frustrating. 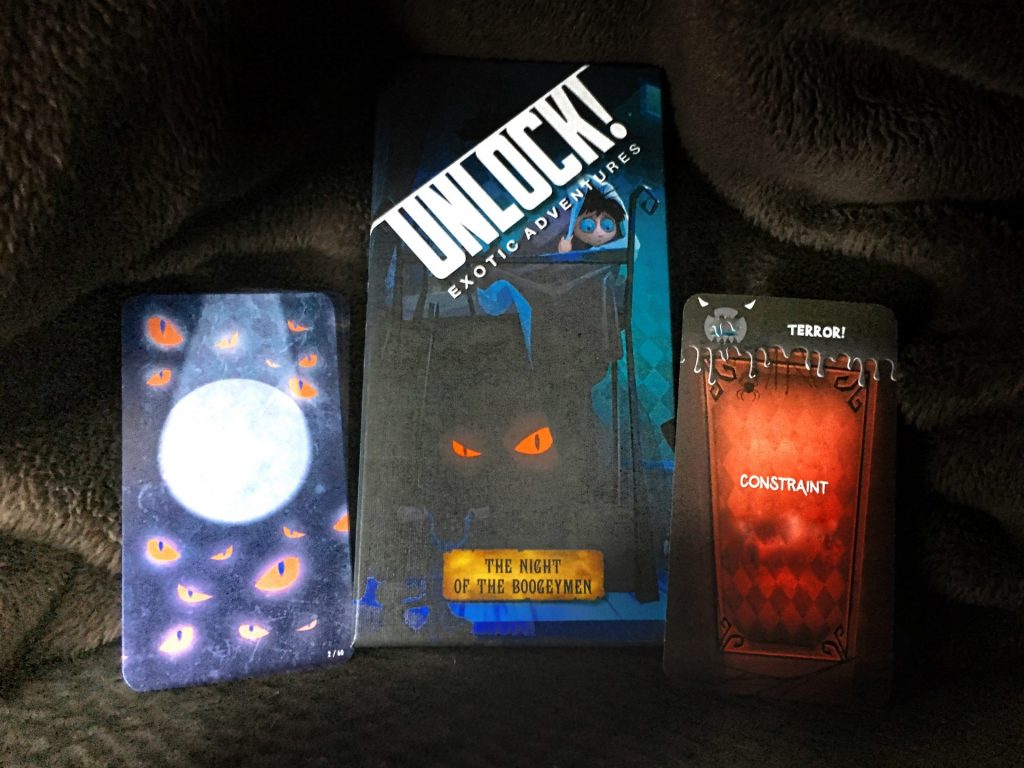 I can’t stress how annoying these boogeyman constraints can be. Normally I would hate this kind of thing in an escape room game, but in this Unlock! adventure it just works so well. I’ve racked my brain trying to determine why I think this is and I’ve come up with two reasons. The first is that the puzzles themselves aren’t terribly difficult without the constraints so the limitations add tension to what is otherwise a relatively simple puzzle-solving experience (even for a level 1 difficulty). The second is that they work with the game thematically. At one point while I was playing The Night of the Boogeymen, an imposed constraint literally made me feel like I was being controlled by a puppeteer. How cool is that?

The Night of the Boogeymen is the easiest Unlock! game I have played to date and for that reason, I think it would work well as an introduction to the series, especially since the hidden objects are pretty clear (and sometimes obvious), unlike the other scenarios with a level 1 difficulty (The House on the Hill and A Noside Story).

Princess Scheherazade is in great danger. In an hour, she must tell one last story to the Sultan to save her life. Unfortunately, she is out of ideas. 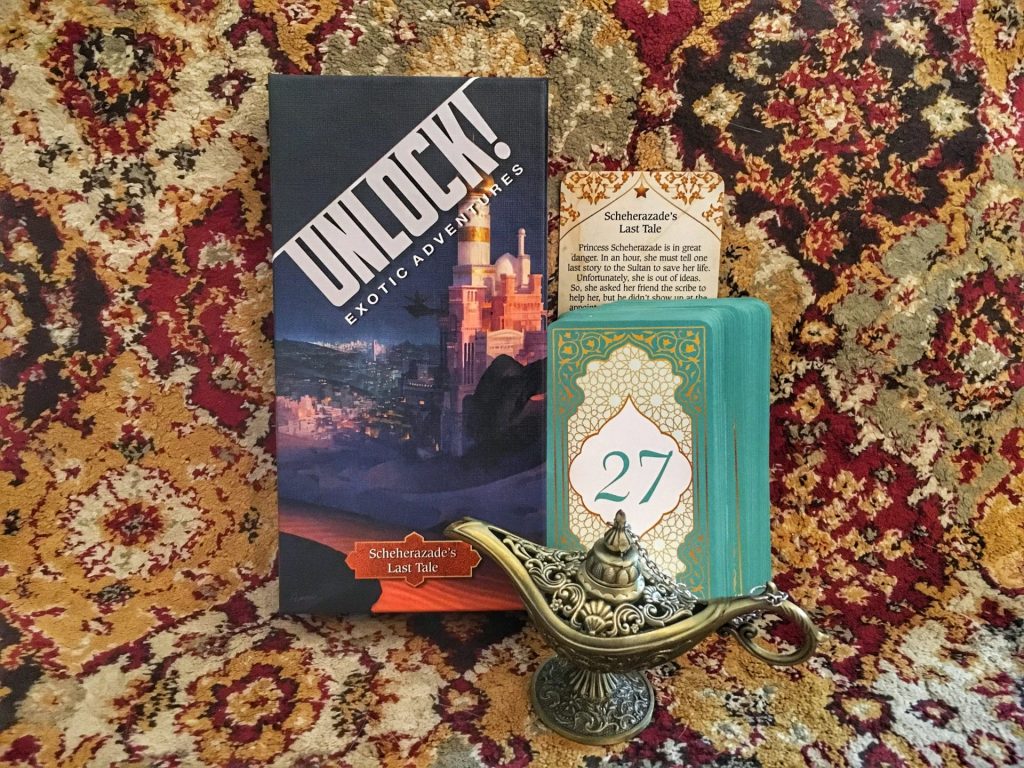 I didn’t fall as hard for Scheherazade’s Last Tale as I did The Night of the Boogeymen, but I did still enjoy the scenario. From the start I was impressed: there was great music, funny elements, and a new, ingenious means of “traveling” around to various locations. The puzzles were relatively simple and, in spite of a few ambiguous moments, there wasn’t anything too difficult to solve (even if it meant doing so through trial-and-error).

Scheherazade’s Last Tale might have been one of my favourite Unlock! games had it not been for the final puzzle. With many possibly correct answers and a hint that isn’t particularly helpful, I found the ending rough. To give you some perspective, I gave 19 incorrect answers on the final puzzle (so you can imagine what my final score was). Even once I solved the puzzle, it didn’t feel particularly satisfying and it just about undid all the fun I had prior to it. Unfortunately the puzzle didn’t quite feel like it fit with everything else I had worked for in the game, even if it did technically make sense as part of the narrative. I would have much preferred the game ending with the next-to-last puzzle.

A young woman knocks at the door of our PI agency. “My name is Gladys Ungerton. My friend, Ned Malone, has gone missing. You probably heard about him: he is one of the members of Prof. Challenger’s expedition!” 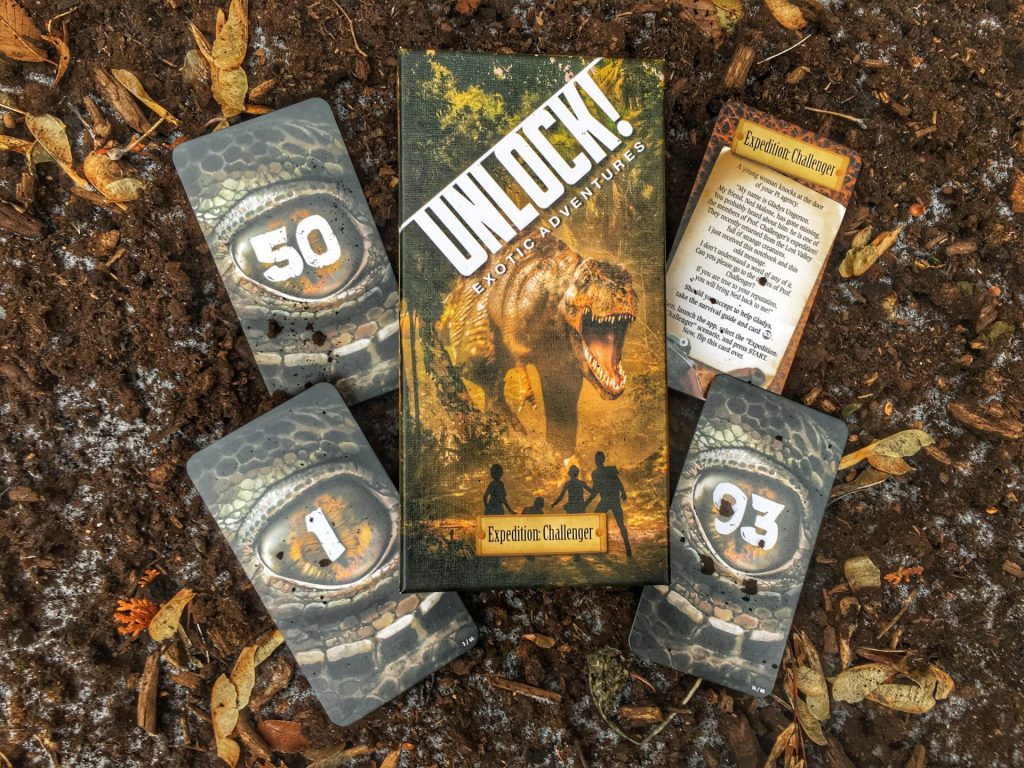 Significant Changes: Along with the usual 60 cards, there are other items included in the box.

If you were expecting a Jurassic Park-like escape room game, then you will be disappointed… at least I think you will (admittedly I’ve never seen the movie). The dinosaurs, while super cool, only play a minor role in Expedition: Challenger. This Unlock! adventure was just that, an adventure. While many Unlock! games do an excellent job immersing players into a thematic experience, very few make you feel like you are out exploring an imagined land. The first to try it was The Tonipal’s Treasure and the first to do it really well was The Adventurers of Oz. If you’ve played either, you will feel a similar sense of excitement as you might have with the other two games.

Expedition: Challenger feels like the adventure escape room game I didn’t know I was looking for. It plays with the hidden objects in a new, more natural way. It uses and tracks time in an innovative way like the detective board game Chronicles of Crime. The Expedition: Challenger adventure also uses the app in a different, more interactive way than I’ve seen any other Unlock! game do. This scenario has shot to the top of my favourite Unlock! scenarios, alongside The Adventurers of Oz.

Closing Thoughts – Finally It Has Happened To Me

If you’ve been following me through my reviews of escape room board games, then you already know what a fan I am of the genre. More specifically, if you’ve been following as I play through each set of Unlock! Adventures, then you know that I haven’t necessarily been wowed by many of the games and that I’ve been waiting for a set of three to restore my faith in Unlock!. Finally I’ve found it.

Even with the few frustrating moments I had when I played through the Unlock! Exotic Adventures, this is still the best set of Unlock! games I’ve played to date. The way in which the scenarios increase in difficulty, use hidden objects, and how players interact with the app will prepare players for anything they might expect going into the other Unlock! Adventure games.

I was so pleased with the Unlock! Exotic Adventures that I am now actually excited to play the next games in the Unlock! series.

The music in the Unlock! app for The Night of the Boogeymen, Scheherazade’s Last Tale, and Expedition: Challenger scenarios is so good that I would recommend just turning that up while you play through each game.

Diversity in gaming   Escape Room Games   Women in board games