Imagine yourself reflecting on a moment in your past that you wish you could redo and all of a sudden a future you appears. They tell you, “Here is a time machine, you know what you have to do.” You take the time machine and realize it is set to go to the date of the event you were just thinking about! As you hit the button that will send you back the future you says, “Don’t mess it up this time!”

Read along as we review The Perfect Moment, the 2017 Card Design Contest from Button Shy Games. It was designed by Michael Brown and art was done by Jonathan Fisher. 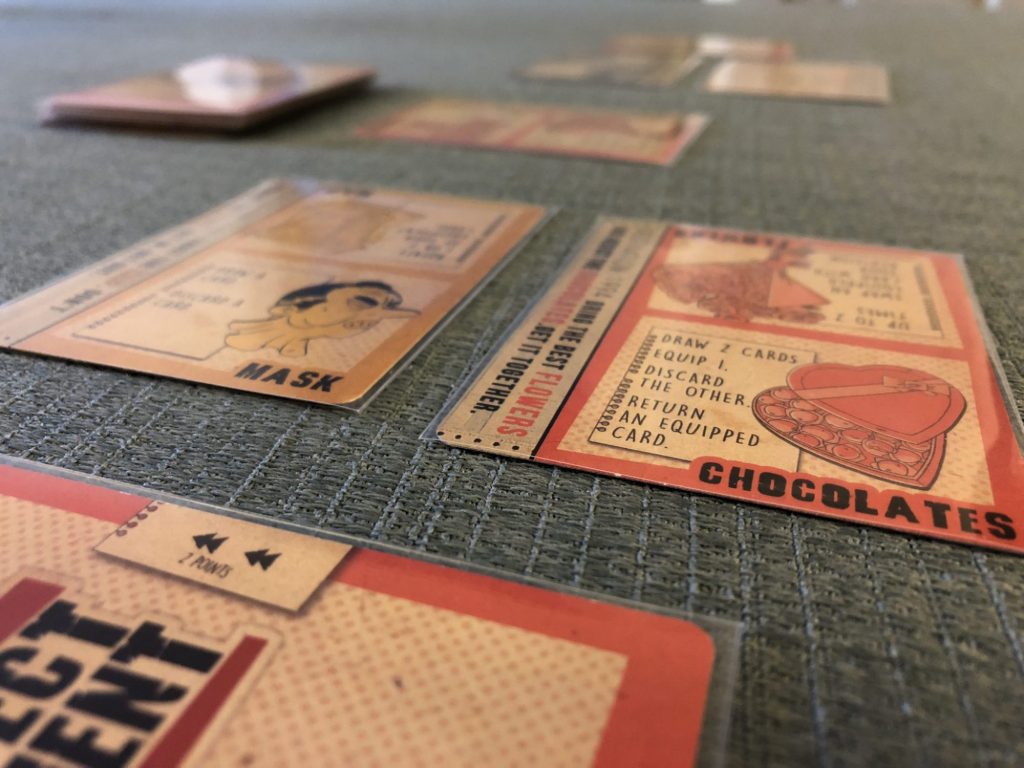 The Perfect Moment is a two-player card game where players race to have the most points. Players will use the actions on the double-sided cards to arrange the cards in front of them to match symbols on other cards in order to score points. The theming behind it all is that you are essentially trying to change a part of your past with those items, but we’ll more on the theme later. The deck only has 18 cards in it so the game lasts about 15-30 minutes.

This game has a few key words to keep in mind while playing:

Shuffle the deck and lay out one card in the center face up, with one side of it facing the deck; this card is called the Paradox. After drawing 4 cards each, both players will simultaneously place one card in front of them (an Equipment card), choose one card to go in front of the other player, Discard or Return a card, and keep one card in their hand (their Revision card). Whoever finishes setup first gets to go first. 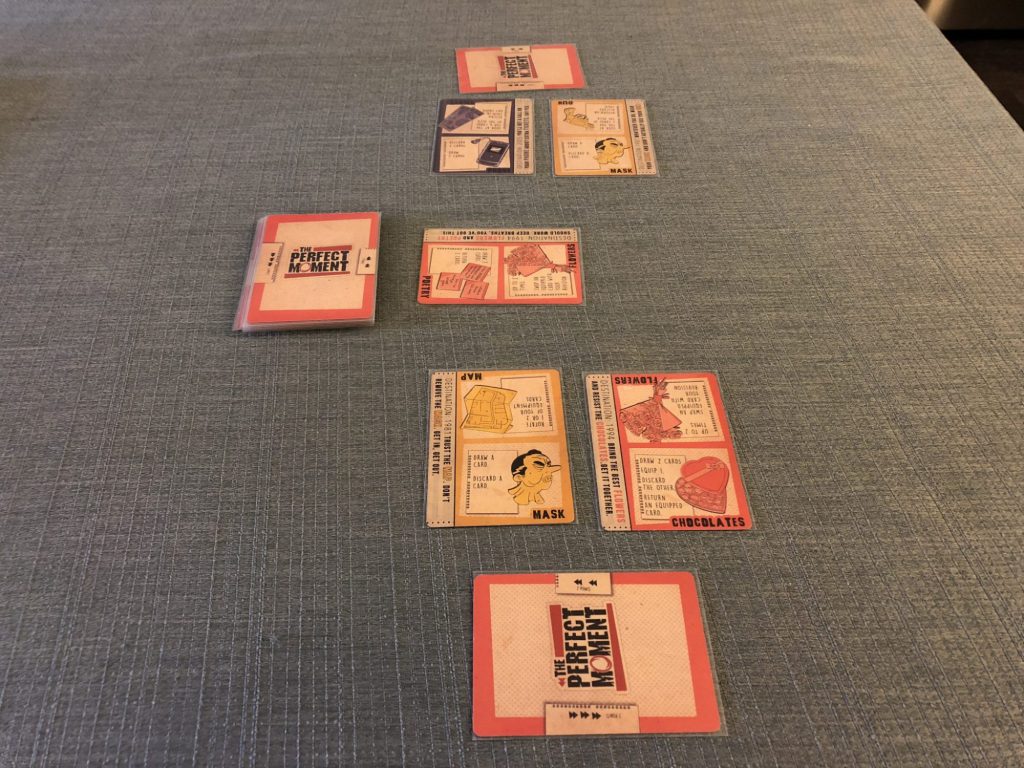 On a player’s turn they can activate up to 2 Equipment cards. When activating a card, the player looks at the side of the Equipment cards (both theirs and their opponents) that are facing them as well as the side of the Paradox card that is facing the deck and choses one action to perform. This will often involve drawing cards, or swapping them with your opponent, but you’ll always end up with 2 Equipment cards in front of you and 1 Revision card in hand. Once that action is complete, they can then activate a 2nd card if they have not already done so.

At the end of their turn a player may score one card if they so desire. The only cards a player can score are their Revision card, the Paradox card, or a point card that was placed face-up by any player. When scoring a card (called the scoring card from now on), the player looks at the items on the scoring card and compares them with the items on their Equipment cards. If certain items on the Equipment cards match and are oriented a specific way then the player scores 2 or 3 points. Since a picture can speak 1000 words, here are some examples.

In this image, both the Flowers and Chocolate are facing the player and they both match the items on the Paradox card (the card facing the deck). The player could score the Paradox card by placing it face down next to him making sure to orient the card so the 3 Points is readable. 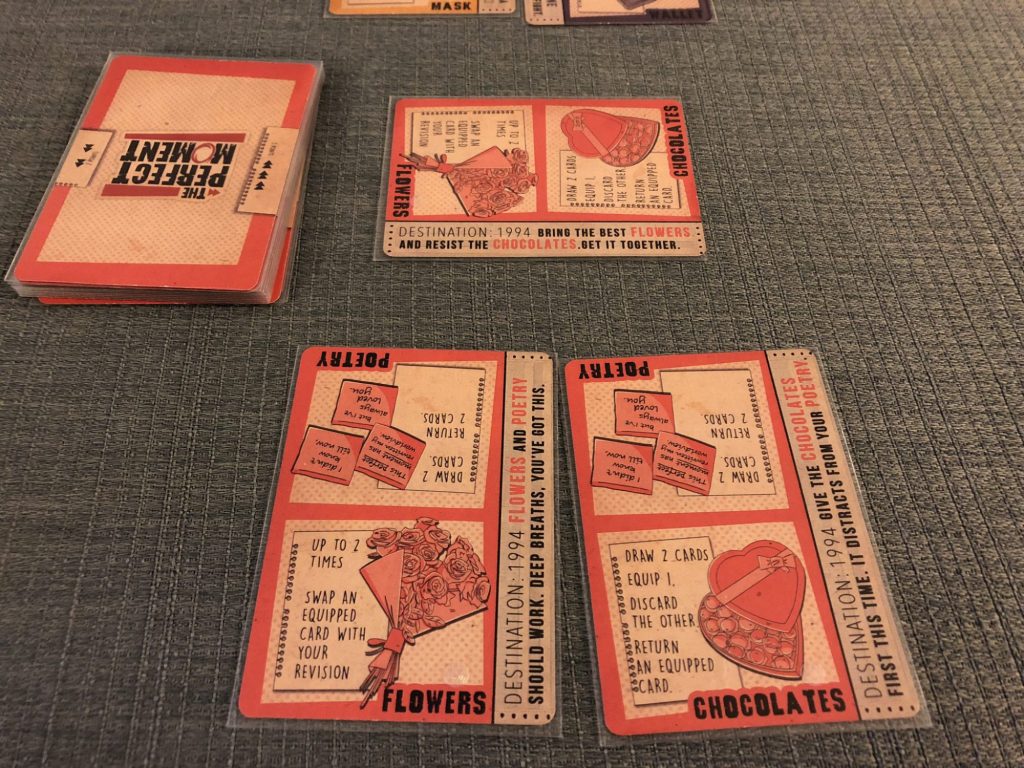 In that same image, if both the Flowers and the Chocolates were facing the opposite way the player could still score the Paradox card for 3 points. The same scenario also applies if the player has chosen to score their Revision card (the card in their hand).

One other way to score a card is by having 1 item on the scoring card match any of the items on one of their Equipment cards. In this case the player only scores 1 point and places the scoring card face up. This card can then be scored later by either the player or their opponent for 2 or 3 points.

After scoring a card, if a player doesn’t have any cards in their hand they can draw one. If there is no Paradox card, draw a card from the deck and place it face up next to the deck.

The game ends when a player reaches 16 points, ends their turn with the deck empty, or tries to draw from the deck and there is no card to draw. At this point the game ends immediately and whoever has the most points wins with the tie going to the person who had the last turn.

Card is oriented to show the player has scored 3 points for this card.

Once you get through the different definitions introduced in this game then it is pretty straightforward. For card games, I like when the actions you can take are written on the cards themselves so you don’t have to scramble through a rulebook to figure out what you can do on your turn. This game gives you just that. You, essentially, can choose from 5 different actions when activating a card – the sides facing you from the 2 cards in front of you, sides of the cards facing you from your opponent, and the Paradox card. Then it is up to you on how you use those actions to manipulate the orientation or placement of the cards to score a card. I feel it is one of those “easy to learn, hard to master” games. You have different options, so trying to figure out the best way to get what you want can be a bit of a puzzle and I love puzzles!

Games are pretty quick so you can play one after the other before you start a more in-depth game or to pass the time. Better yet, because of the small footprint of this game you can play it anywhere – on an airplane, at a restaurant as you wait for dinner, or even at your desk at work when you and a co-worker just need a quick breather.

The game is color-blind friendly. There are only 3 main colors – yellow, pink, and blue – but the images on the cards are distinct so the colors don’t matter. They do help to distinguish which images to look for when trying to score, but you can ignore colors and look for just the images and you’ll be fine. 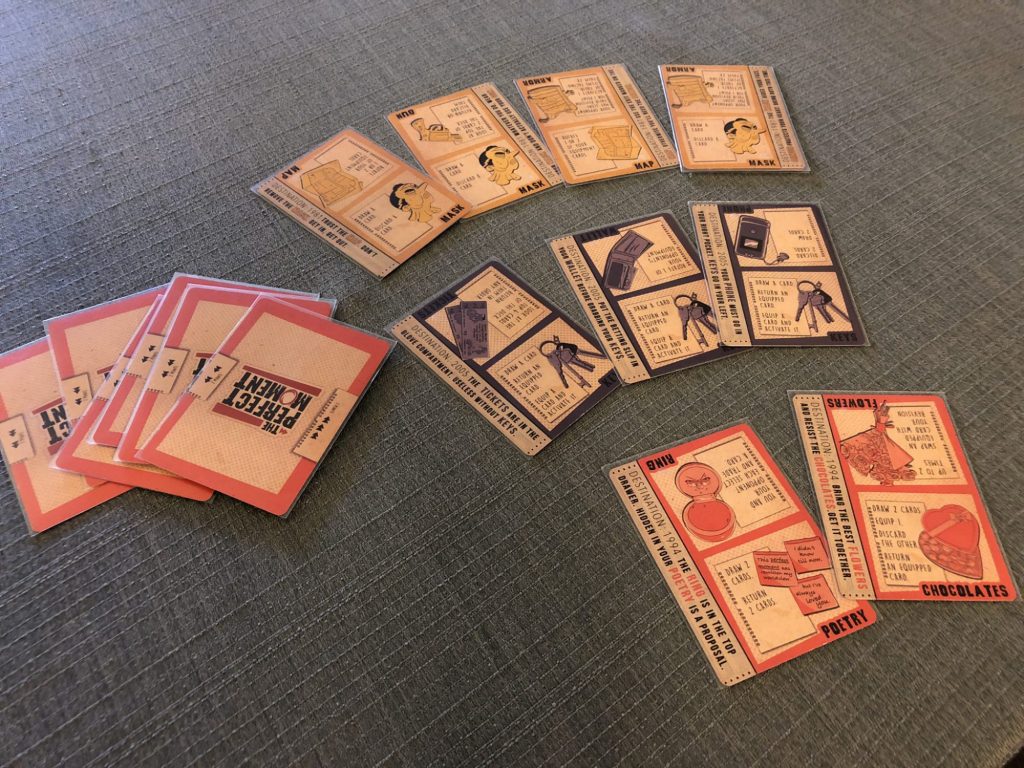 I do like that this game offers a single player variant. Your turns are the same – activate up to 2 cards and then score 1 card. Then you have a dummy player (they call it Echo) who is trying to shed cards on their turn. Your goal is to reach a certain number of points. I’m horrible at it, but I enjoy the puzzle.

When it comes to the theme of the game, it really is just tacked on. I get where they are coming from with it, but you could have added any theme to it and not affect how the game plays. Essentially, you are trying to change the past by getting Equipment together at the right point to change the future and make it The Perfect Moment… little bit of a stretch in my opinion. With that being said, I do enjoy the flavor text on the side of the different cards. My favorites are – Destination 1994: Give the Chocolates first this time. It distracts from your Poetry (on the card with Chocolates and Poetry) and Destination 1994: Hiding the Ring in the Chocolates leads to an emergency visit (on the card with Ring and Chocolates). You can have fun with the theme and come up with a fun story to go along with the cards, but it won’t affect how the game plays itself.

If you are looking for something with a little bit more meat and theme this is not the game for you, but if you are looking for a good puzzle this will be right up your alley. It is portable so you can take it anywhere and play it just about anywhere too. If this sounds interesting to you, check out Button Shy’s latest Kickstarter! 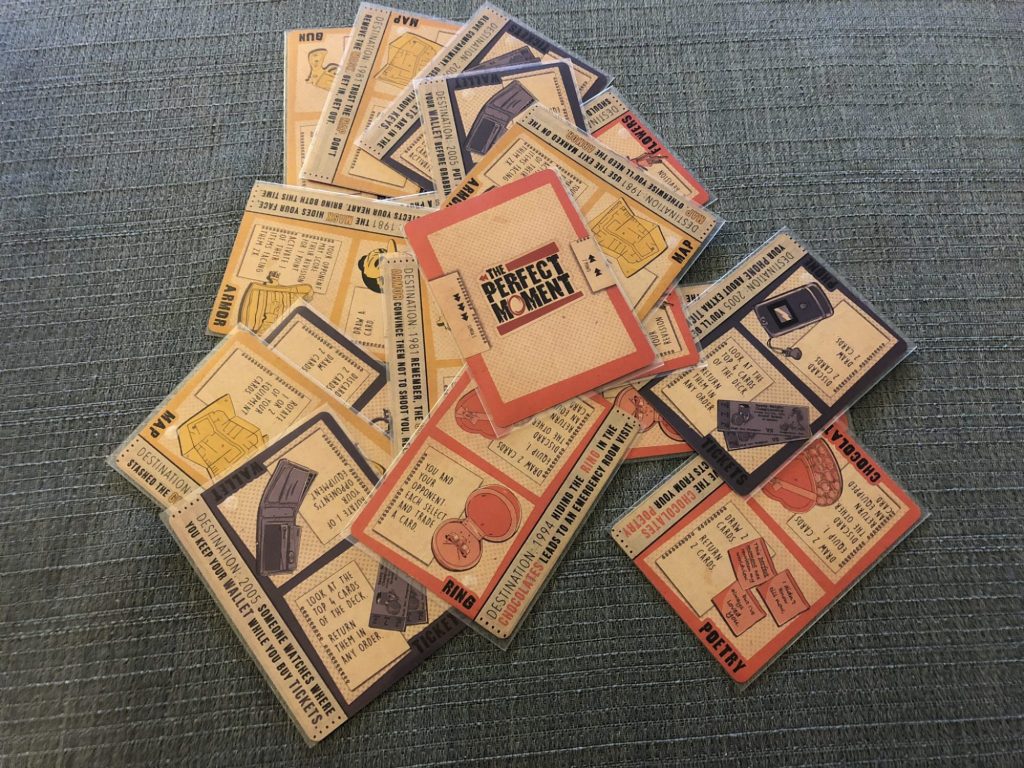