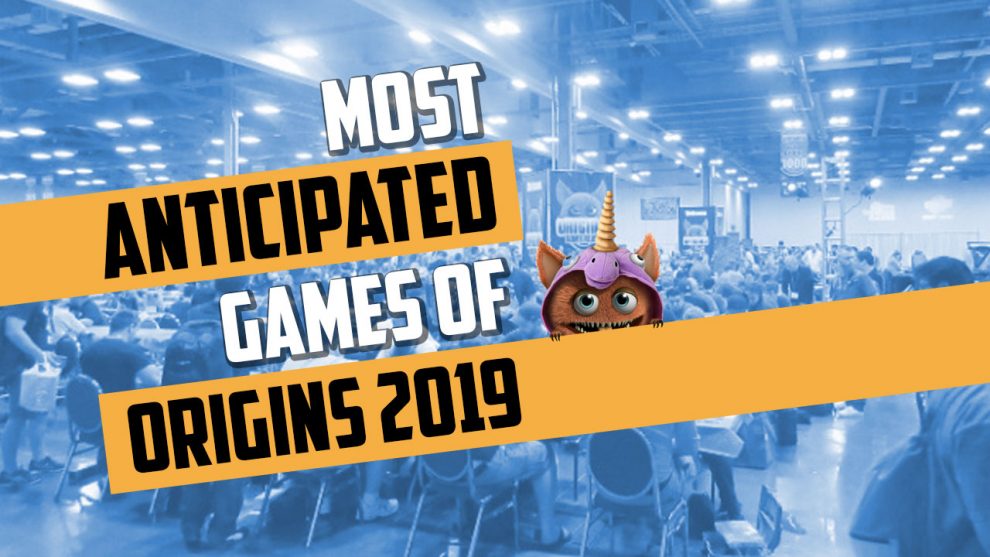 Leslie Ewing
1 Comment
Join our team as we look at our most anticipated games of Origins 2019, one of the most high profile board game cons in North America.

Every year hordes of gamers descend on Columbus, Ohio for Origins Game Fair. First held in 1975 this celebration of gaming attracts people from all over the world. As the first major gaming convention in the US, Origins offers fans the chance to buy brand new titles, as well as giving them a taste of what’s to come later in the year. The Meeple Mountain team has pored over the list of more than 300 new releases, and taken some time to collect what we think are some of the stand out titles coming to you at this year’s Origins. Did you favorite make the cut? Let us know in the comments, or ping us on social media! 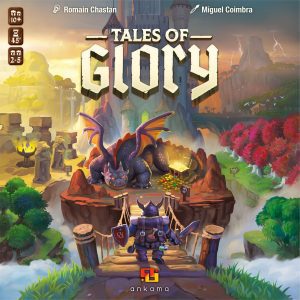 Simultaneous action selection… ok, I’m interested. Tile laying… yep, still liking this! Beautiful artwork… where can I purchase? I saw a review for this game a few months ago and I’ve been anxiously awaiting its arrival. From a small glance of the rules it seems like a pretty simple game, but with a little bit of meat on it. I can introduce it to family or non-gamer friends and they would have a lot of fun with it, but my heavier gamer friends would still enjoy it too… definitely a win-win in my book! One of my and my husband’s favorite deck building game is Harry Potter: Hogwarts Battle and to now have a 2-player competitive version… I’m in! Deck building is one of my favorite game mechanics and when you include the Harry Potter theme, yeah, this will definitely be an addition to our collection.

Abomination: The Heir of Frankenstein 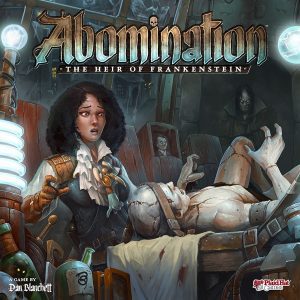 You and up to 3 of your friends play as scientists competing to be the first to recreate Dr. Frankenstein’s creature. You’ll do so by gathering resources from grave yards or the morgue, conducting research, and hiring sketchy companions all while trying to make sure your resources don’t decay before you can finish the creature. It sounds disgusting and stressful and I want to play it!

Read our review of Abomination: The Heir of Frankenstein. 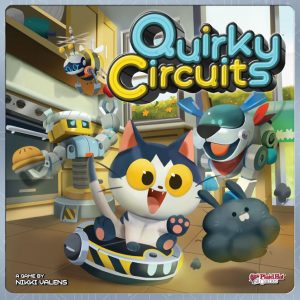 When Nikki Valens designs a game it’s automatically on my most-anticipated list. With Arkham Horror 3rd Edition, Eldritch Horror, Mansions of Madness 2nd Edition, and her inclusivity storyline for Fog of Love, she’s demonstrated her innate talent for taking a classic design and improving upon it in simple, elegant, and dynamic ways. Quirky Circuits appears to be another creation from the same mold: she perfects the “robot programming” genre by making it a cooperative affair and introducing a book of scenarios/puzzles for the robots to solve that ramp up in difficulty for the players. This hybrid of Roborally and Magic Maze is the game I didn’t realize I’ve been waiting for, and I look forward to when it “achieves sentience” later this year! 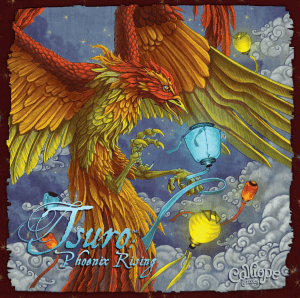 Calliope Games celebrates their 10-year anniversary in 2019 with a third installment in the Tsuro universe. Tsuro: Phoenix Rising shares core mechanics with previous Tsuro releases: play a tile, move your pawn along the created paths, and don’t move (or be moved) off the board. Tsuro: Phoenix Rising adds new dimensions and flips the script (literally): tiles are now double-sided and can be flipped and rotated during play to introduce more brain-burning strategies. Phoenix also adds a race mechanic: players vie to be the first to travel to seven “lanterns” on the board (in order to restore the stars to the night sky). The original Tsuro is a minimalist abstract Zen-like classic that’s as fun to look at on the table as it is to play, and Tsuro: Phoenix Rising appears to continue this tradition. 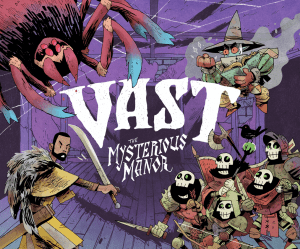 Leder Games’ runaway hit is the asymmetrical gem Root – a mainstay in the Top 50 on Boardgamegeek since its release. But the seed from which Root grew was Vast: The Crystal Caverns – a dungeon crawl that poured the foundation for the supreme asymmetric gameplay found in Root. Which brings us to Vast: The Mysterious Manor, which is both godmother to Root and offspring to the original Vast. In this next iteration, we leave the caves to explore a haunted, cursed mansion – playing as adventurers, the giant spider that lurks there, or the manor itself. The “haunted house” theme has always been relevant to my interests, and the promise of a more streamlined version of the original Vast’s gameplay puts this firmly on my “must have” list!

Read our review of Vast: The Mysterious Manor. 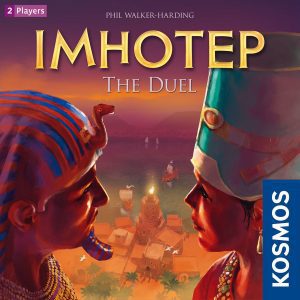 Phil Walker Harding, the designer of Imhotep: The Duel, and its big brother Imhotep, is a master at constructing simple, but compelling, game systems. The original Imhotep offered just four options to players, and even then you could only select one of them on a turn. The choices you make feel taut with suspense as you try to outmanuever your opponents. Imhotep: The Duel appears to offer a similar experience, but for two players. This new title maintains many of the same choices, but transforms them into an altogether different experience. Look for a review of this one soon!

Lanterns Dice: Lights in the Sky 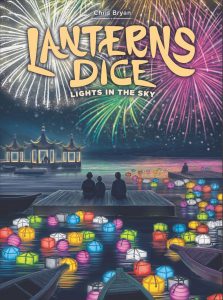 Lanterns is one of the games which got me into modern board gaming. It’s a tile laying game in which every players gets something on every other players turn. Collect sets of gorgeous lantern cards, race to trade them in for points, and do your best to not fall behind. Lanterns Dice is a roll and write that maintains it’s ties to the original game, but offers something new. Roll the dice, rotate the built in tray and fill in your scoresheet. Collect points for being the first to color in complete shapes, and maybe you’ll be the winner.

Read our review of Lanterns Dice: Lights in the Sky. 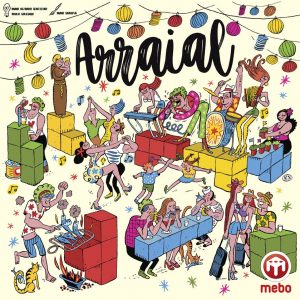 Arraial was a surprise hit at last year’s Essen, with a delightfully fun cover featuring a riotous neighborhood party. “Arraial”, as these traditional Portuguese summer celebrations are called, is a quirky spin on Tetris as players select tiles from a central board to bring onto their personal dance floor. Each tile features dancers, musicians, or other party goers, and placing them onto their personal player board allows players to form the perfect match and attract visitors to their party. The player with the most visitors wins, but everyone celebrates in this fast paced game.

With so many titles coming out at Origins, there’s something for everyone. Pick your favorites and let us know in the comments or on social media! 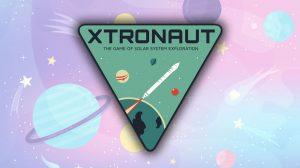 Plan a mission to space! Read our review of Xtronaut and figure out which rocket will best accomplish the goals of that mission.! 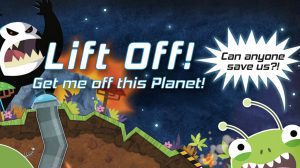 Lift Off: Get Me Off This Planet Game Review

Your planet is going to explode and you need to use whatever you have available to get your aliens to the planet’s Lift Off platforms. Check out our review of... 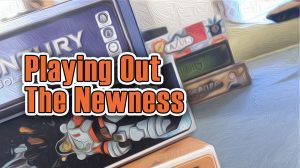 Playing Out “The Newness”

Getting new board games is always a delight, but sometimes "the newness” wears off too quickly. Do you have the same problem? Join Leslie as she tries to... 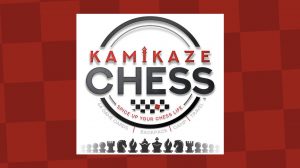 What if you had a portable version of Chess; with a twist? Read our Kamikaze Chess review to see if this spin will make you change your mind on this classic...