Join me if you will for a bit of time travel. No, not the sort that would give theoretical physicists a headache; just the mental kind. The date was October 7 2014, and the Kickstarter platform was growing in popularity, especially for board games. Indie game publisher Foxtrot Games announced the campaign for a quaint tile-laying game called Lanterns: The Harvest Festival (henceforth shortened to Lanterns). Full of gorgeous artwork and vibrant colors, Lanterns was set in Imperial China where players acted as artisans decorating the palace lake with floating lanterns. It featured easy to learn rules, quick gameplay, and kept every player engaged by giving them a card even on other player’s turns. Lanterns would go on to become a beloved staple in my family, and possibly yours.

Fast forward to 2019 and Foxtrot is at it again, this time taking the familiar gameplay of Lanterns and extending it directly upwards along the z-axis by introducing fireworks! This new version, a roll and write game called Lanterns Dice: Lights in the Sky, features the same lush artwork as its big brother but also includes polyomino tiles and big chunky gorgeous dice. Make no mistake: this dice game has some hidden depth. Let’s take a look at Lanterns Dice: Lights in the Sky and see if it might find a place in your collection. 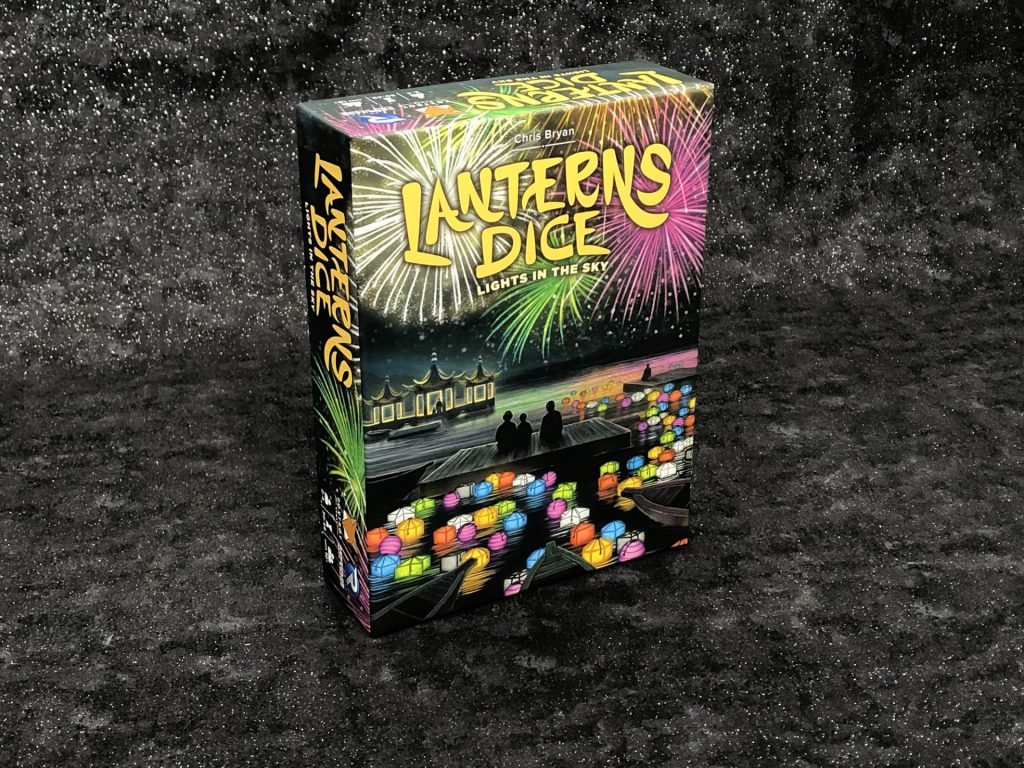 What’s This About Lights in the Sky? An Overview

That’s right, the theme of this new game is all about fireworks. In Lanterns Dice: Lights in the Sky players will continue to honor the emperor with their lanterns but now they might also be able to launch beautiful fireworks displays high into the air. Players will roll dice to gather lanterns of specific colors in order to mark them on their personal score sheet. 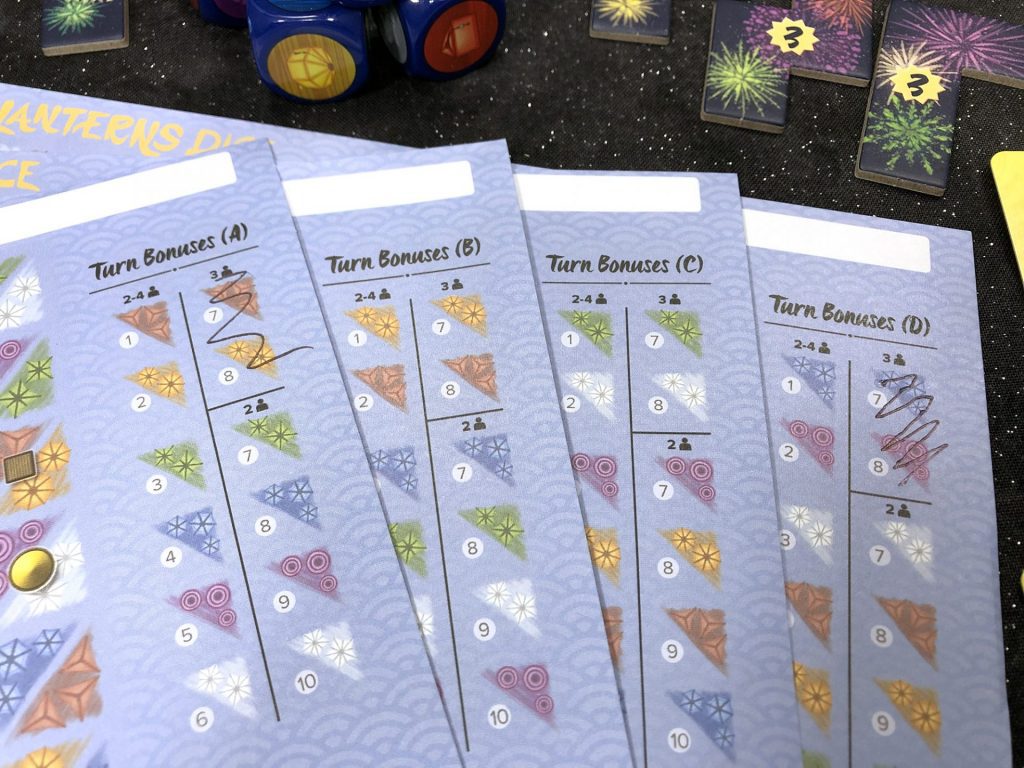 There are 4 variations of the scoring sheet.

By filling in the correct shapes in pools on the surface of the lake, players will be able to launch a fireworks display and collect points. Players can shade in pavilions to collect gifts which help them purchase favors from the Emperor, as well as fill in platform spaces which allow for useful combos. After a number of rounds based on player count, the game is over and the player with the highest score wins the game, and the gratitude of the Emperor and his court. 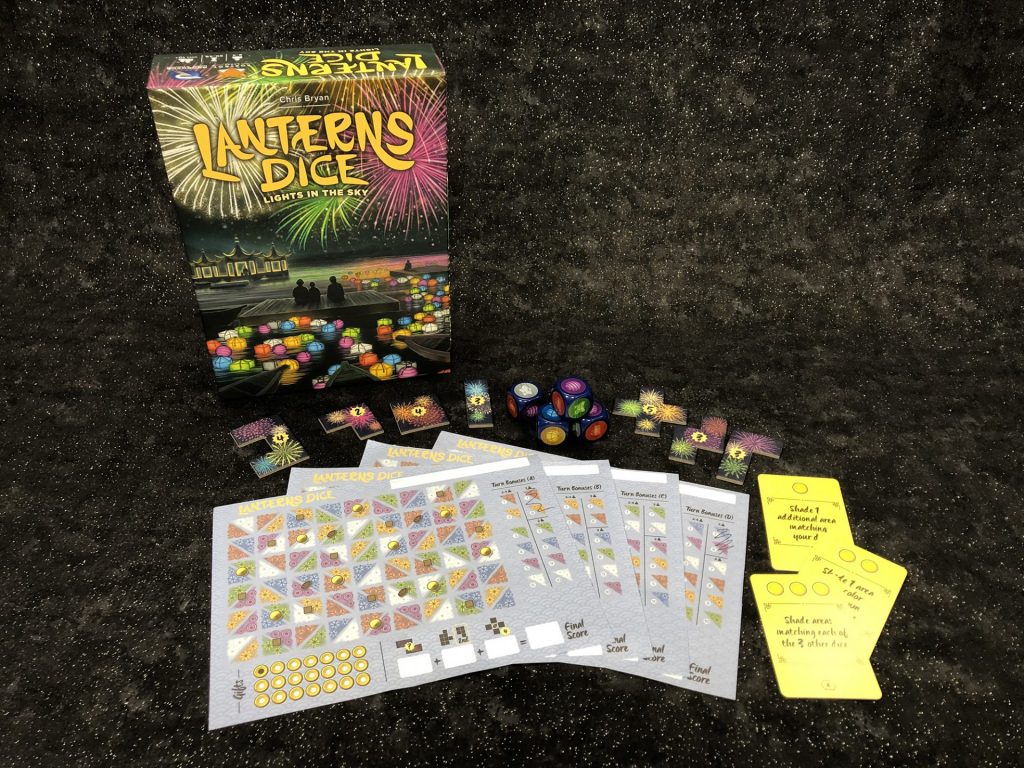 The Anatomy of a Turn

Lanterns Dice: Lights in the Sky comes with 4 massive chunky dice which display 6 of the 7 colors we’ve come to know from the original (sorry black, there’s only 6 sides to these dice). On their turn a player will roll all 4 dice into the handy dice tray which comes in the box, then rotate the tray until the color of their choice is facing them. 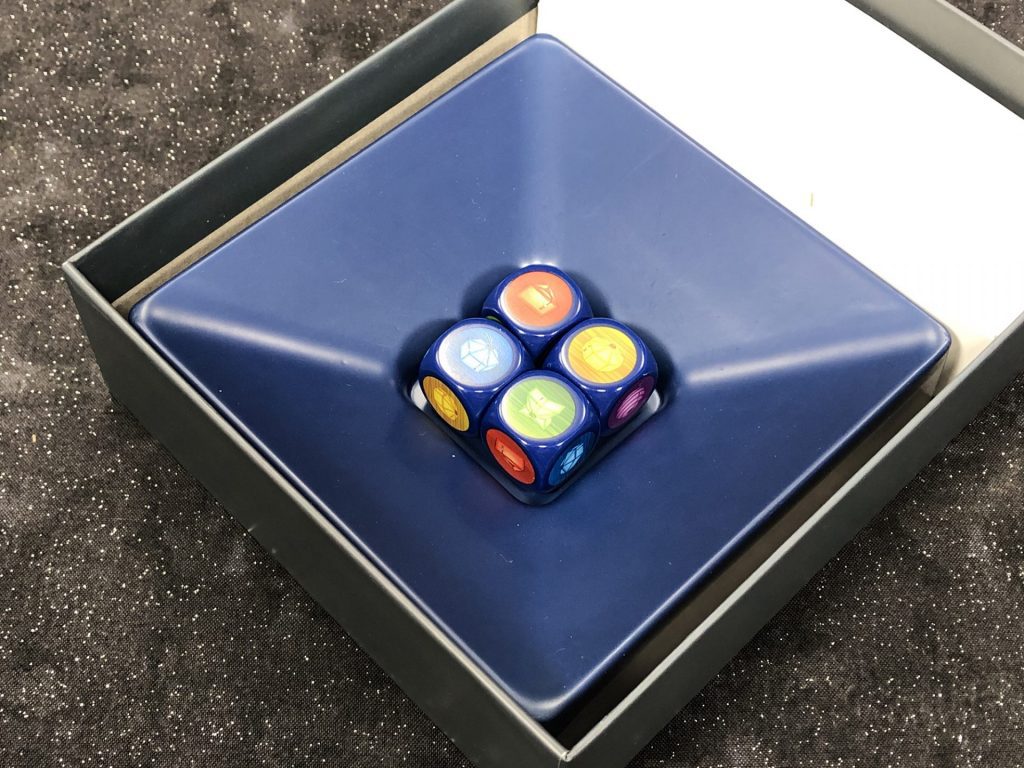 In picking the color of your choice, you’re explicitly assigning the remaining dice to the other players around the table. After picking your die, select a triangle on your scoresheet that matches the color of your choice and color it in. Keep in mind that on their turn only, each player receives a bonus color they can place anywhere on their sheet. 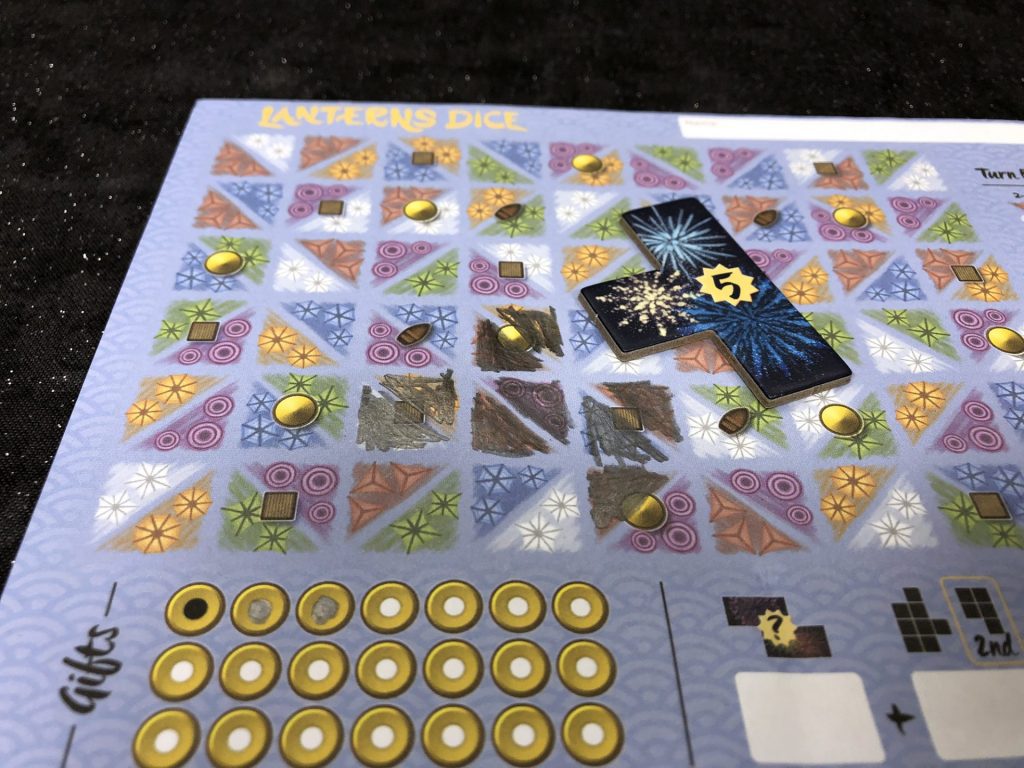 After shading in the colored spaces of their choice, players can optionally spend gifts they’ve collected to receive a favor from the Emperor. These favors range in cost from 1-3 gifts, and in effectiveness from shading 1 extra space up to 3 additional spaces on your sheet. 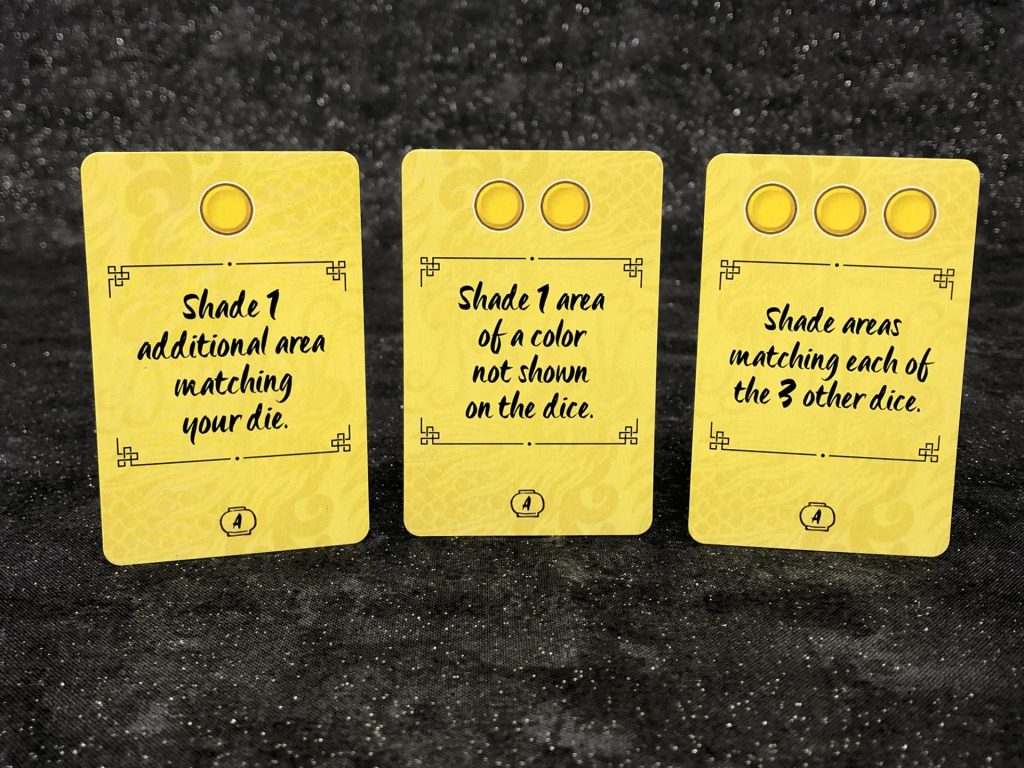 Finally, a player can choose to launch up to one firework display per turn. Players earn the right to launch these brilliant light shows by shading in entire areas of the lake in Tetris-style shapes which were selected at the beginning of the game. These shapes range in value from 1-6 points and are pulled from the stack in descending order. 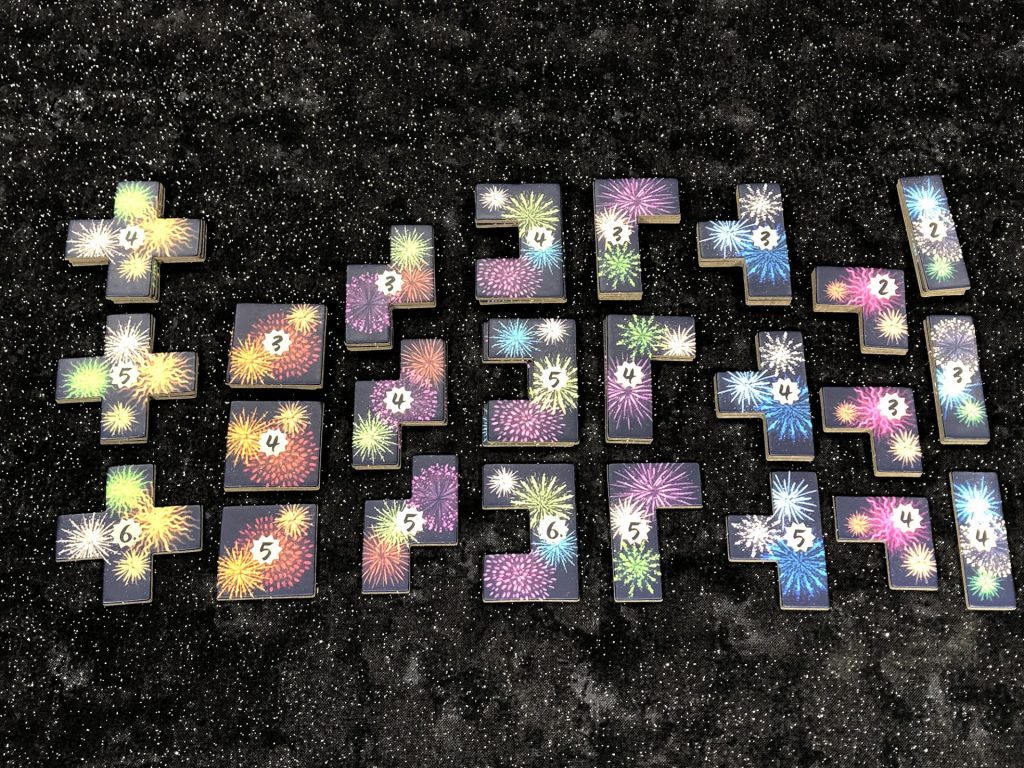 After a set number of turns, ranging from 10 for a two player game to 6 for a 4 player game, players tally up their scores. Points are awarded for the values on each fireworks tile, total filled-in pools in the second largest group on your sheet, and for surrounded rowboats.

The player with the most points wins the game, and the gratitude of the Emperor!

Final Thoughts on Lanterns Dice: Lights in the Sky

I was very excited to try Lanterns Dice, as I’m a big fan of the original game. It’s a fun puzzle that doesn’t require a lot of players, so it makes a perfect gateway game. I even had the chance to meet the game’s designer, Christopher Chung, on a trip to Toronto in 2018. 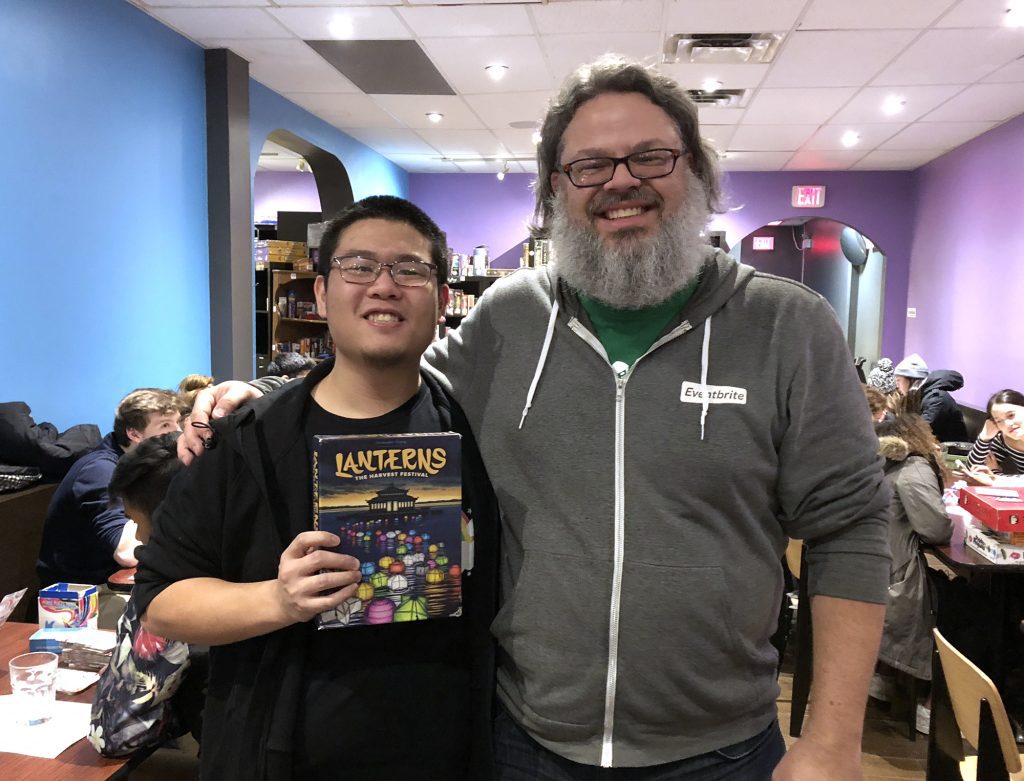 Lanterns Dice has a lot of things going for it: turns are as easy in this game as in the original Lanterns, although I found that there was a bit more analysis in this game. Whereas in the original you were simply trying to collect cards (and hoping to get the occasional double), in Lanterns Dice you have to pay attention to pavilions to earn gifts, platforms to gain combos, and pools to score those valuable fireworks tiles. Plus you have to make sure you keep at least 2 separate groups of completed pools or else you’ll totally miss out on the end-game bonus (like I’ve done more than once).

Even though designer Chris Bryan and Foxtrot Games have done a great job of honoring the original, there’s a lot to keep in mind which makes Lanterns Dice deceptively complex. If you’re coming into this expecting to play Lanterns 2.0 you might be caught off guard. Sure it’s got all the same trappings, but the gameplay experience is definitely different.

And that’s okay! I still enjoy playing Lanterns Dice. Rolling those big dice is super satisfying, as is completing a group of pools and grabbing that 6 point fireworks tile, but given a choice between this one and its big brother, I’m sorry to say that 大哥 (big brother) will win out almost every time.