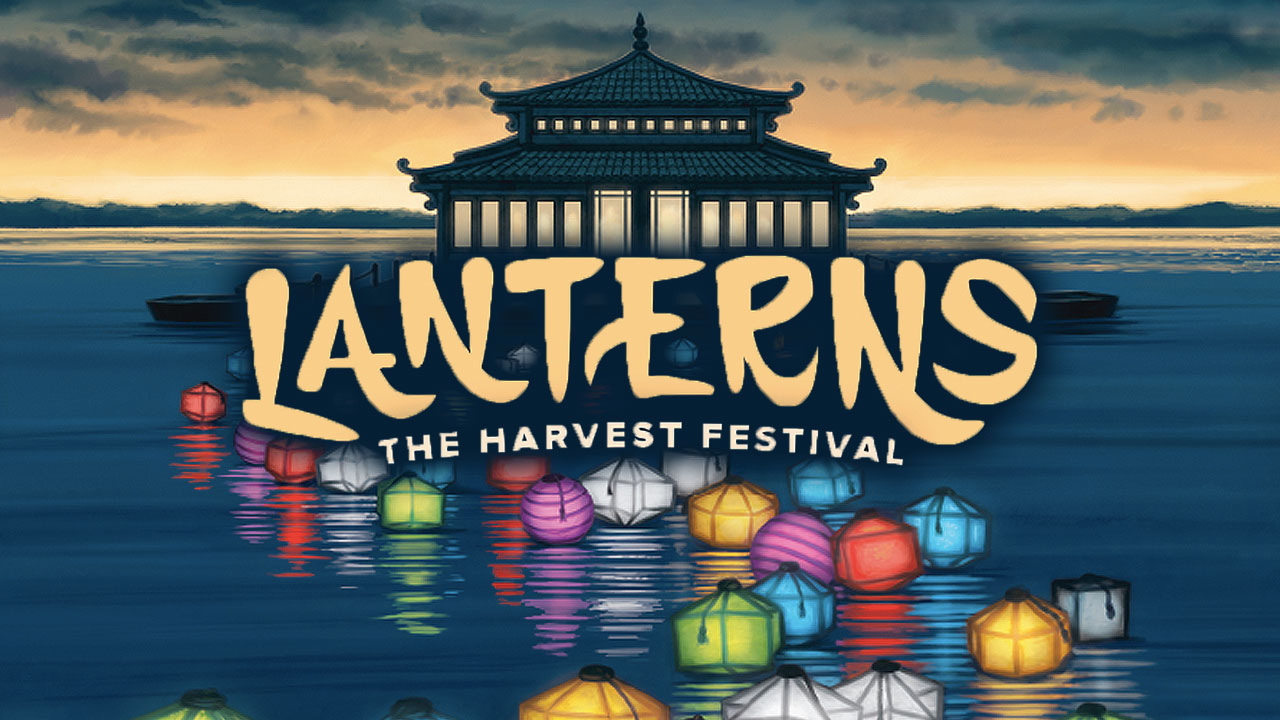 The Emperor is scouring the kingdom for peerless artisans to create harmonious patterns of lanterns on the palace lake. Earn the most honor and you win the Emperor's favor.

Lanterns – The Harvest Festival is a tile-laying and set collection game designed by Christopher Chung and released in 2015. In Lanterns players attempt to catch the Emperor’s eye by creating harmonious patterns of lanterns on the palace lake. Earn the most honor, by dedicating the most sets of lanterns, and you’ll also win the Emperor’s favor. 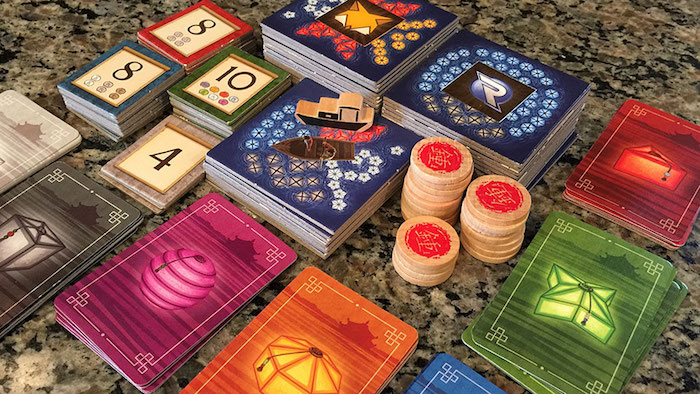 How to Setup Lanterns

How to Play Lanterns

In Lanterns players take turns playing lake tiles to the middle of the table (the lake) and collecting lanterns cards based on the resulting patterns. Every tile in Lanterns has a color on each of it’s four sides; red, blue, black, white, green, purple, or orange. The color facing you after you lay down the tile is the card you will collect, and the color facing each of your opponents is the color they’ll collect. Since each player collects a card on every other player’s turn, you’ll need to keep a close eye on what you’re giving to your opponent. Colors do not need to match when tiles are laid down, but as an added bonus if you match colors, you’ll receive an additional card (in the color of the matching tiles), and if you make a color match against a tile with a platform on it, you’ll also receive a favor token. 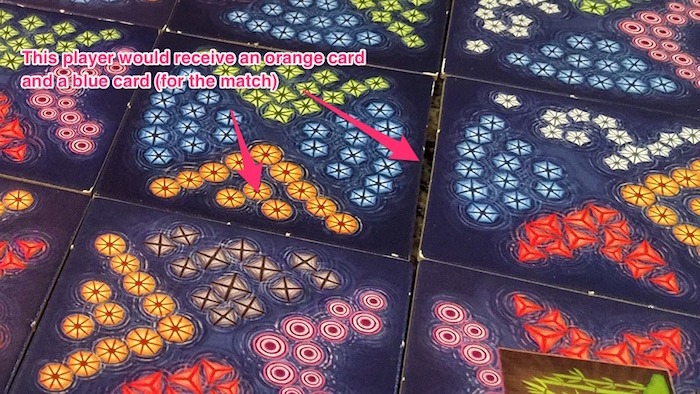 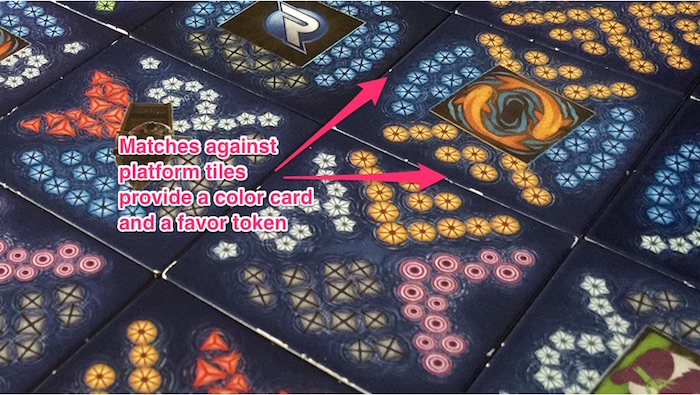 After you’ve begin collecting cards it’ll be time to think about what do to with them. With a hand limit of 10 you’ll need to make tough decisions. Before drawing a lake tile you’ll have the option of making a dedication to the Emperor in the form of a certain number of lanterns cards. You can dedicate 4 of a single color card, 4 pairs of any color cards, or 1 of each color. 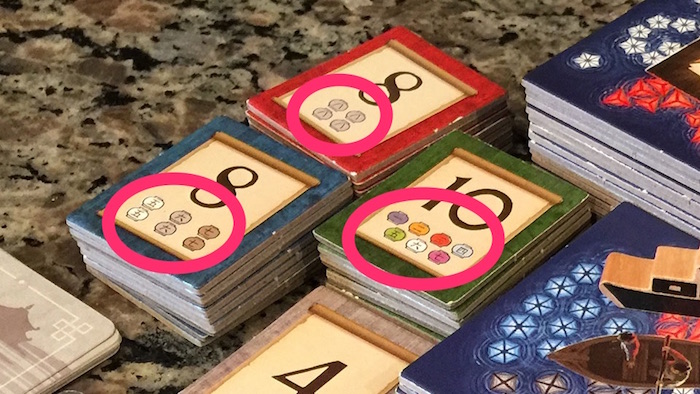 Each of those options has a stack of associated tiles with values in descending order. The sooner you can claim the most valuable tiles, the better for your final score. As an additional challenge some of the dedication tokens have dots in the lower corner indicating that they should be removed based on the number of players in the game.

Players also have the option of trading in 2 favor tokens (and a card of any color), for a card of a selected color. This must be done before any other part of your turn and gives you the ability to collect that one missing card from a set.

What I Dislike About Lanterns

Only a few things detract from this game, and none of them have to do with the actual gameplay. The tiles themselves are sturdy and well made, but as you can see from some of the photos above, the edges are starting to chip off and peel. With the popularity that Lanterns has rightly earned I’d wager that subsequent printings won’t have this problem. And admittedly we’ve played our copy a lot.

The second issue is the insert. It’s pretty barebones, which in some cases isn’t a problem, but with the tiles and tokens and cards, etc. things got a little messy in there. Here’s a picture of the solution I came up with. Hot gluing 4 foam core pieces made all the difference. Again, this is something that can easily be resolved in future printings should they care to do so. 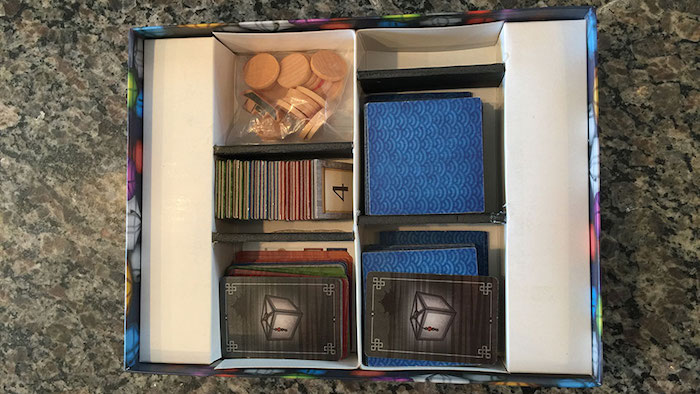 The last issue is the lanterns cards. They’re the Ticket to Ride size which are frankly just annoying. The cards themselves are well made, and while they don’t need to be full-sized, as someone with large hands these tiny cards are a pain to deal with.

Lanterns is a marvelous game. It’s beautiful, with fantastic illustrations, bright colors, and sturdy, well-made components; but Lanterns isn’t just a pretty face. Because of the hand limit you have to constantly monitor your cards (and your opponents cards) to make sure you’ll be able to trade for your desired dedication token before someone snatches it from you. With each player receiving a lantern card on every other player’s turn, you truly feel like you’re in a race to be the first one to turn in cards to get the high point tokens. In almost every game I’ve played, the point spread has been less than 10. It’s so well balanced that everyone feels like they have a chance to pull off a win. 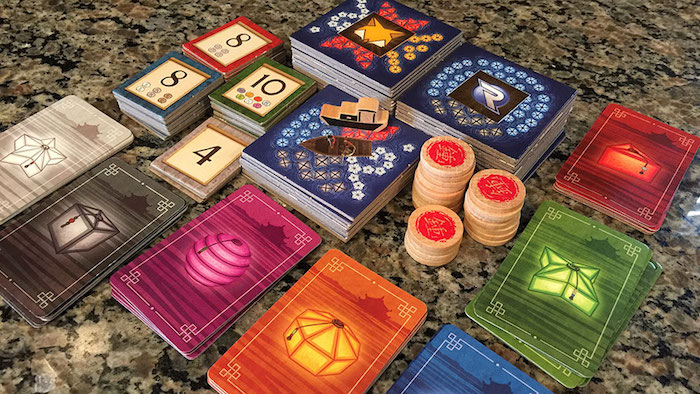 As you might guess, I love this game, and will gladly play it any time I have the chance. Lanterns gameplay is so smooth and seamless that it’s a cinch to teach to experienced gamers or friends new to gaming. I can’t recommend this one highly enough, and it’s something that anyone should consider adding to their collection.

The Godfather A New Don Review – Bring the Dice, Leave the Cannolis