Originally blue and white, but later produced in many bright and vibrant colors, azulejo tiles have been around for a very long time. The beginning of these functional works of art dates back to the 13th century. Originally Moorish in origin, the art form really caught on once King Manuel I of Portugal visited Spain in 1503. While he was there, he was mesmerized by the beautiful tile covering almost every visible surface. Transfixed and inspired, he commissioned the production of Portuguese azulejo upon his return.

In the game of Azul, you are taking on the role of one of the commissioned artists. Your goal is to construct the best display (i.e. – score the most points) by the game’s end to please the king. After all, a king’s favor is worth its weight in gold. 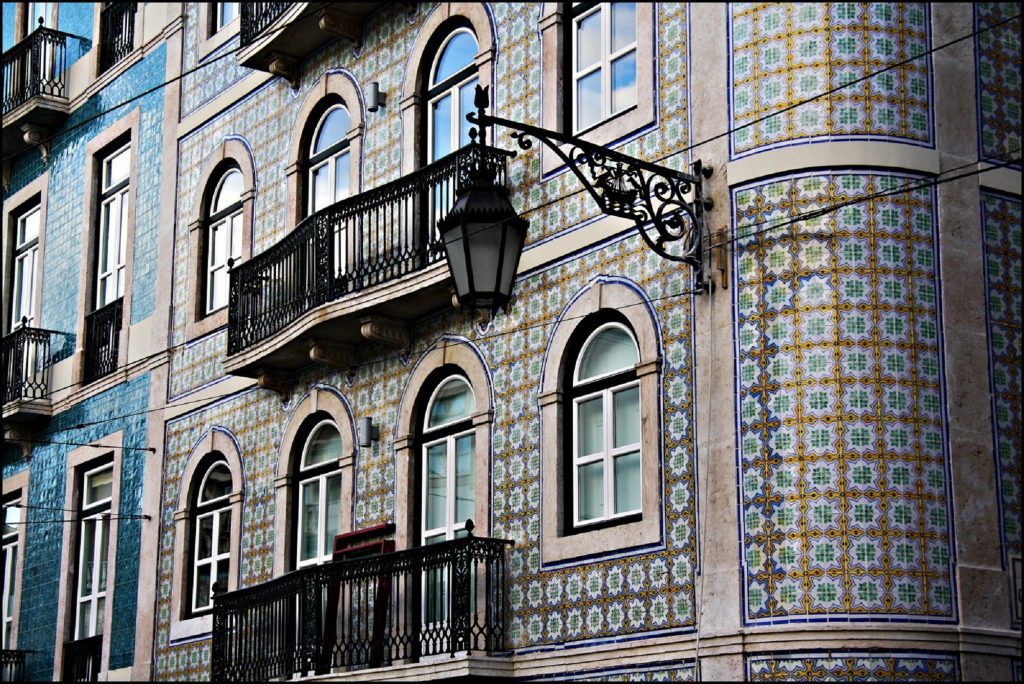 During each round of Azul, players will be taking turns drafting tiles from several collections of tiles in the center of the table. The tiles that a player selects has a direct effect on the pool of tiles that are left for other players to choose from. After taking all of the tiles of the same color from one of the pools, the player will place those tiles onto the “pattern lines” area of their player mat according to specific placement rules. Once all of the tiles have been drafted, any completed pattern lines will cause tiles to be added to the “wall” area of the player mat and score points. The game plays on like this until one player finishes a horizontal line of tiles on their wall. Then, final scoring is performed and the person with the most points wins the game.

If you’re just interested in what I think about the game, feel free to scroll down to the Thoughts section of this review. However, if you’d like to know more about how the game is played, read on.

First, each player takes a playing mat and places it in front of them with their scoring cube on the 0: 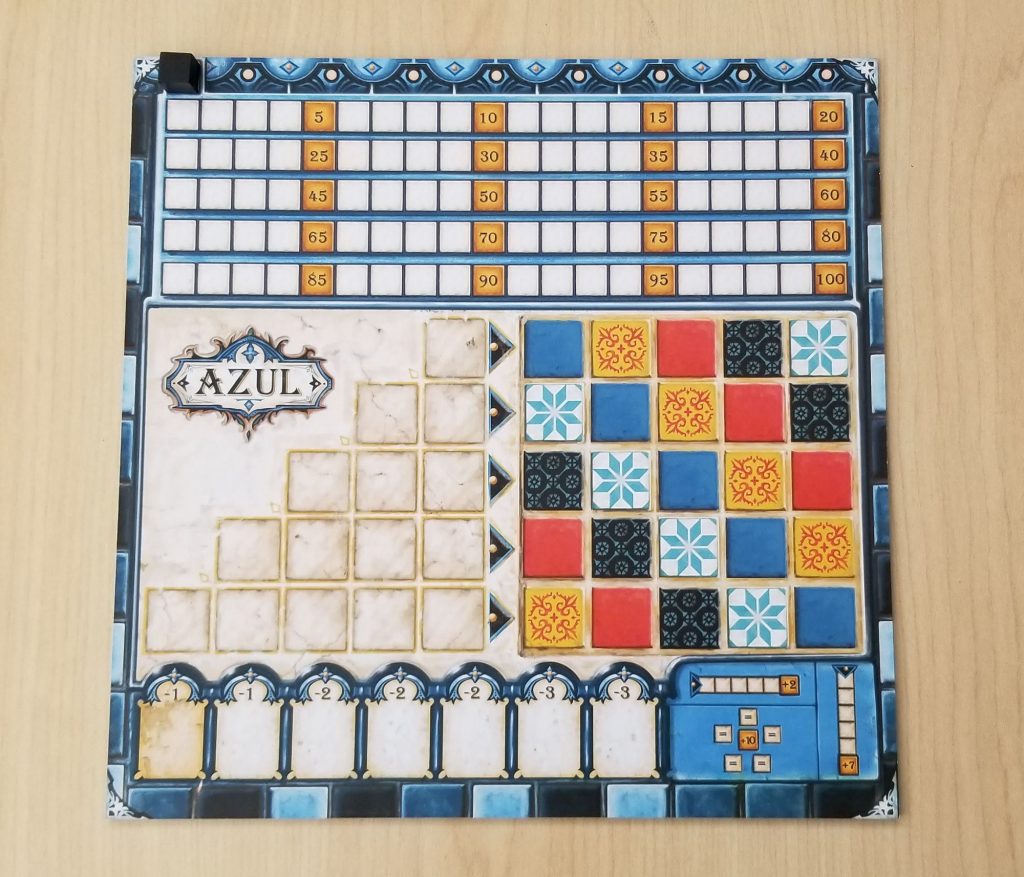 Then, a number of “Factory displays” (determined by player count) are arranged in the center of the table in a circle. These Factory displays are then seeded with 4 tiles apiece, drawn from the bag: 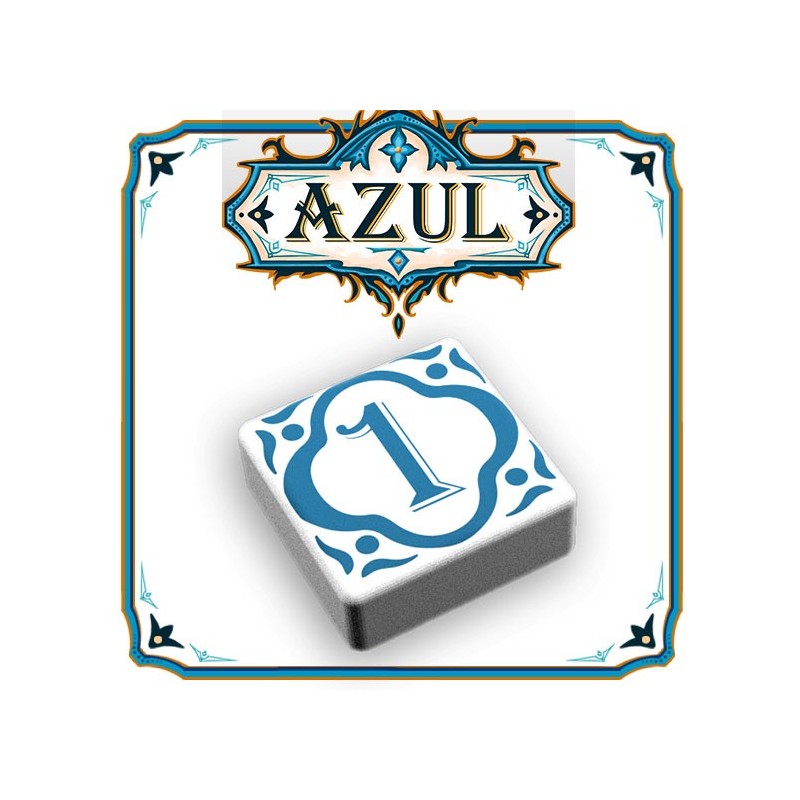 The Draft and the Pattern Line

At the heart of Azul is the tile draft that occurs each round. Before players take their turns, the starting player token is placed into the area in the center of the floor displays and the starting player seeds the factory displays with tiles. On a player’s turn, they will select a group of tiles from any of the factory displays, take all of the tiles of the same pattern or color, and place them onto their player board into the pattern line area. Any unchosen tiles are moved to the center area between the factory displays. Alternatively, a player may opt to take all of the tiles of the same color or pattern from the center area but, if the starting player token is there, they must take that as well and immediately add it to the “floor line” area of their player board (more on that later).

Placing tiles onto the pattern line requires the players to follow some basic rules: 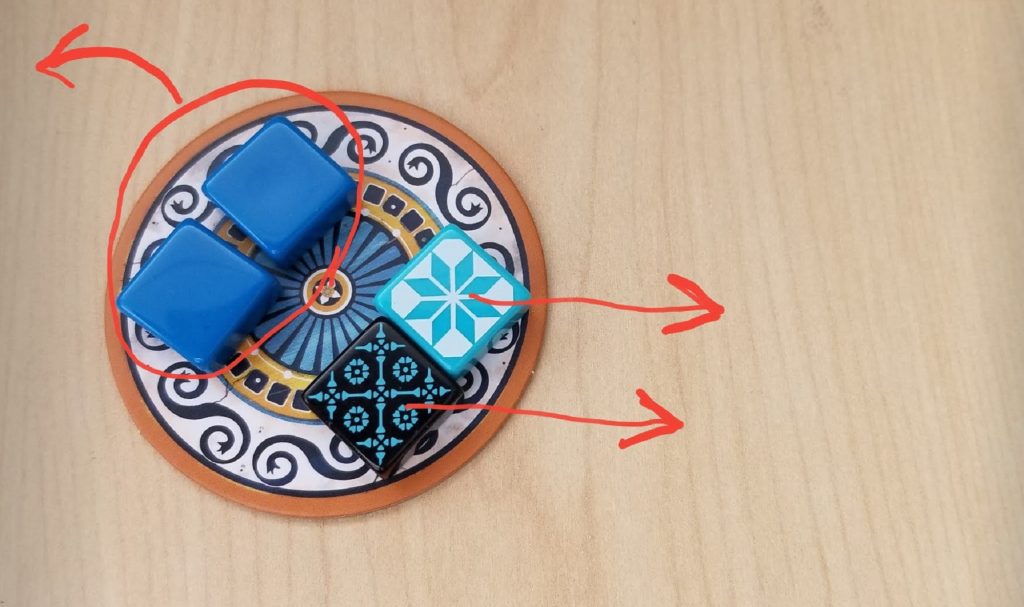 The player selects the blue tiles and adds them to his display. The remaining tiles are moved to the center.

End of Round Scoring

Each tile placed onto a wall is scored both vertically and horizontally. The tile by itself is worth a single point. However, if that tile completes a line of tiles, it scores for every tile in that line. To better illustrate this, let’s take a look at an example.

In the example above, there are several finished pattern lines – line 1, line 2, and line 4. Lines 3 and 5 are incomplete. Pattern line 1 consists of a single tile in the classic blue and white azulejo style. Since this line is complete, the tile is placed onto the corresponding location on Wall line 1. There is already a black tile in Wall line 1 and since this newly placed tile touches the black tile, the player will score 2 points. Currently, there is nothing in Wall line 2, so the newly placed tile isn’t going to be scoring any points vertically.

Pattern line two holds two red tiles. Since this line is complete, one of the red tiles is moved onto the corresponding location on Wall line 2. The remaining red tile is placed back into the box. Since there is already an orange tile on Wall line 2, this newly placed tile is going be scoring for itself as well as the orange tile. And, because of the black tile above the newly placed tile, it will also score for itself again as well as the black tile. The player scores 4 more points as a result.

Line 3 is incomplete so these tiles remain where they are. Likewise for Pattern line 5. Since Pattern line 4 is complete, one of the tiles from there is moved onto Wall line 4 where it scores accordingly. The remaining tiles in Pattern line 4 are placed back into the box.

This floor line is going to cost its player 4 points!

Once all of the players have completed their scoring, any tiles in their floor lines are placed back into the box. The player with the starting player token places it back into the center area and then refills the factory displays from the bag. If the bag should run out of tiles, the bag is replenished with the tiles from the box.

The game continues on in this fashion until the end of the round in which at least one player has completed a single Wall line. Then final scoring is performed. Players earn bonus points for completed Wall lines, vertical rows, and collecting all 5 of one color or pattern. When the final tally is complete, the player with the most points is declared the winner.

For me, the initial draw to Azul is the stellar artwork and the gorgeous components. I imagine this is true for many people that have played the game. The colors are bold and vibrant and the tiles have a nice chunky, tactility to them. It’s just a very eye-catching game. Looking at it, I can totally understand King Manuel I’s obsession. Chris Quilliams and everyone else involved in the visual aesthetic of this game should be commended.

When I first saw Azul being set up on a table, I sat down to play knowing nothing about the game aside from its popularity. I honestly didn’t know what to expect. As the rules were explained to me, I found them fairly easy to grasp and I was eager to begin playing once the rules explanation was completed.

That first play through did not go very well. By the end of the fifth or sixth round, I had only managed to earn a pitiful 17 points. In the very next round, I got stuck with a massive pile of red tiles that all went to my floor area. In one fell swoop, almost all of my progress was erased. I was so incensed that I rage quit. I was ready to throw Azul into a fire and never revisit it again.

Thankfully, cooler heads prevailed. My wife convinced me to come back and revisit the game. I’m glad I did because my terrible first game experience taught me lessons I hadn’t realized that I was learning. To rehash a trite expression – it was like a light bulb went off in my head. I was suddenly able to peer around the mechanics of the game and see the clever strategy that lay behind it. I went from being Azul’s number one detractor to one of its biggest fans. 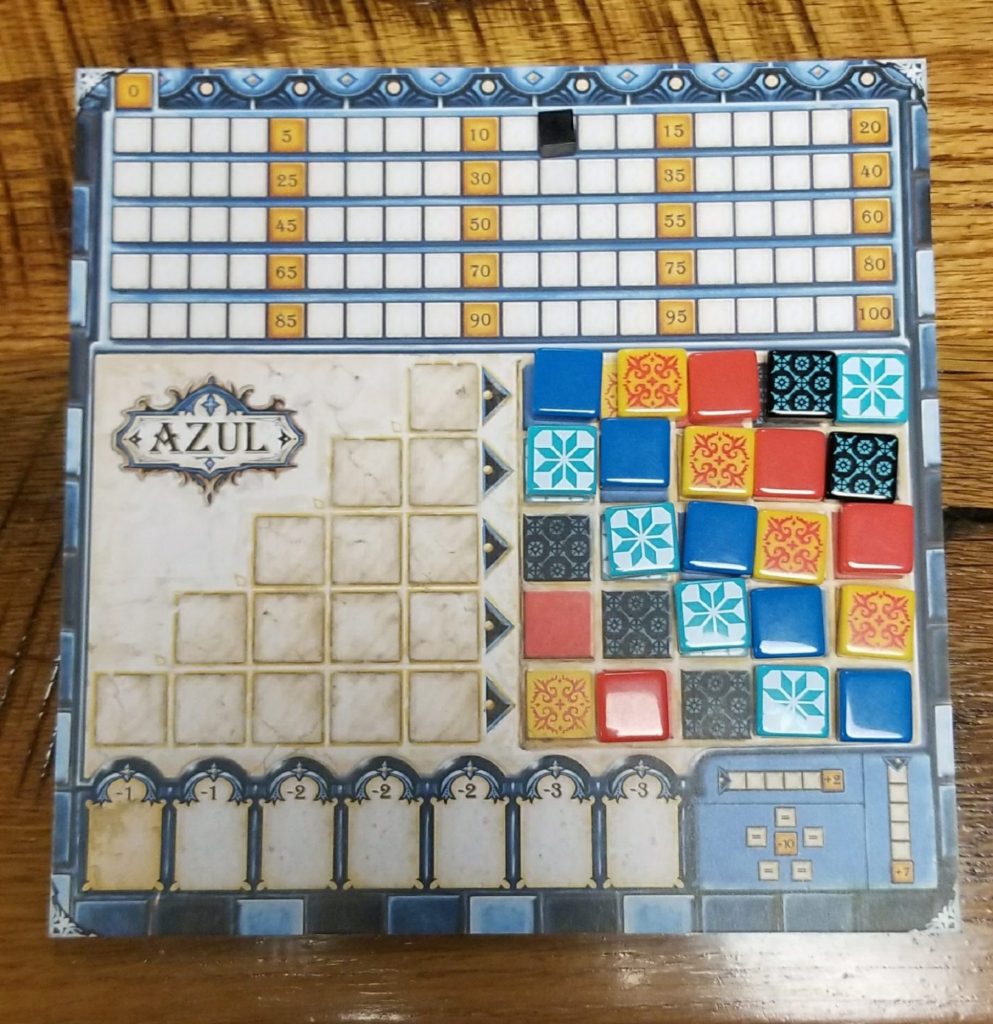 I trounced my competition with 112 points!

Playing Azul is a lot like playing a game of chess. You’ve always got to be aware of what your opponent is doing. Sometimes it’s very obvious, sometimes it’s less so. If you can clearly see that their completing a single pattern line is going to give them a ton of points, then your strategy should change accordingly. Maybe you want to try to load up the center with as many tiles of that color as possible so that they are forced to take way more than they need. Or maybe you decide to try to pick up all of those tiles for yourself. If you go that route, though, you’re going to want to try to maximize your point scoring opportunities in accordance. It’s a clever game of cat and mouse as you try to maneuver your opponents into unwanted positions while trying to force them to open up good scoring opportunities for you at the same time.

This is where the heart of Azul lies – this constant guessing and second guessing (and even triple and quadruple guessing!) as you try to puzzle out how your opponents are liable to react to your actions. “If I take those tiles, then they’ll probably go for those over there which will leave THOSE other tiles in the center and then I can grab those on my next turn and complete this pattern line over here. But, if they don’t go for those other tiles, they might go for that bunch instead. Maybe I should go for that other bunch, even though it doesn’t really help me much, to try to force them into going for the tiles that I really want them to go for. But, wait…” And on and on it goes. While these kinds of mental gymnastics might not be appealing to some, for me they are what really makes this game great. Constantly having to make interesting decisions even helps me overlook the randomness introduced by the tile drawing. I almost don’t even notice it anymore. I’m all about that brain burning.

It’s no wonder that this amazing game received a Spiel des Jahres nomination. Azul’s made a believer out of me and I can’t get enough of it. In the few short months that I have owned it, it’s become my second most often played game. The easy to learn rules, the super quick set up and tear down, and thought-provoking game play keep me coming back for more. Add in the fact that a typical games of Azul only lasts 20-30 minutes and you’ve got a recipe for an almost perfect game. If you’ve never played Azul or you’re on the fence about it, I highly recommend you give it a try.