Bob Pazehoski, Jr. @bobpazjr
Add Comment
In First Take Fridays we offer hot takes on games that are new to us. This week we have The Great Wall, Zendo, Cosmic Frog, Museum Suspects, and Taxi Derby.

Like other Awaken Realms games such as Lords of Hellas and This War of Mine: The Board Game, The Great Wall comes in hot with world-class production. Massive amount of boxes holding dozens of minis, hundreds of cards, and physical components that rival some of the best bits in the business. The copy of The Great Wall I played featured the “Sundrop” pre-shaded miniatures, which are stunning in their faux-aged beauty on the table.

The game? Bulky. A worker placement game with variable player powers, resource gathering, dice-less battle sequences and end-game milestones, The Great Wall doesn’t feature much new for a seasoned gamer. The game runs long for my tastes; my four-player game ran about four hours. I’m not sure I will come back for a second play, and it didn’t help that The Great Wall has a rulebook that is seriously lacking. All that said, The Great Wall has me thinking about it days after my game ended. 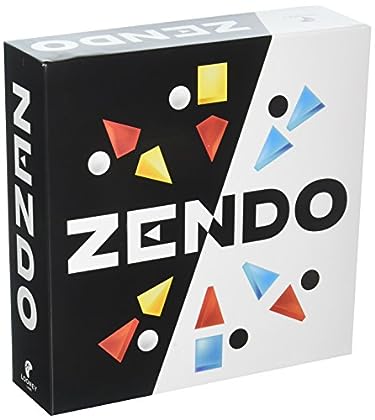 An inductive reasoning game played with Cubes, Wedges, and Pyramids (this is a Looney Labs game, after all) in three colors. One player selects a Rule card from the deck and creates two structures with the pieces: one that follows the Rule and one that does not. From there, players take turns building structures to see if they do or do not follow the Rule.

Understanding the possibilities of the Rules took a bit of explaining, but once everyone caught on, they were eager to continue playing—so much so that we’re playing it again next week.

You know, after one play of Cosmic Frog, I’m mostly just curious. I think we were all too cautious, too measured, too hesitant to really get into the spirit of this madcap design. We had a good time, but it was easy to see that the spirit of the game was not manifesting. Cosmic Frog, about five-mile tall frogs consuming the scattered remnants of a ruined planet, is meant to run on a certain amount of chaos. It’s certainly not for everyone (dice combat!), but the luck baked into the design is balanced out by thoughtful mitigation systems. Once you onboard the rules, it isn’t that complicated a game to play. I’m looking forward to playing it again.

Check out our review of Cosmic Frog. 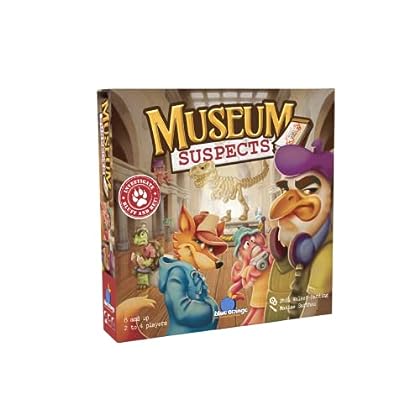 Whenever I hear that Phil Walker-Harding has a new game coming out, I take notice. Sushi Go!, Fjords, Imhotep, Silver & Gold: PWH can seemingly do no wrong. So, when Museum Suspects showed up on my radar, I was excited to get my hands on it, despite knowing nothing about it.

Museum Suspects is a simple deduction game. There’s been a robbery in the museum, resulting in an instant lockdown. Spread throughout the museum’s rooms are sixteen suspects. Each player has a collection of twelve differently numbered Investigation tokens which they’ll place on suspects that they believe could be the perpetrator.

Like most of PWH’s other games, the game presents a very simple facade. Usually this facade is belied by the deeply strategic game that floats just beneath the surface. Museum Suspects, thus far, does not seem to fit this mold. I may just be terrible at the game or perhaps the strategy doesn’t really emerge until you play with higher player counts but, so far, it feels like whether you win or lose comes down to sheer, dumb luck. Peek at the right clues and you’ll do well. Peek at less helpful clues and you probably won’t. The game’s easy and quick enough that I don’t mind exploring it a bit further. I’m eager to play it again and I am especially eager to try it at a higher player count.

Taxi Derby puts players behind the wheel of a cab trying to outsmart and outrun the police. The rules might have you believe your objective involves picking up passengers and dropping them off around the city and improving your ride to entice a wider variety of fares; but the thrill of the game lies in doing so as fast as possible, the success of which depends entirely upon outmaneuvering the lone patrol car.

I can’t say this is the most exciting game I’ve ever played, and I’m tempted from the outset to house rule forward movement as a requirement (the cars are typically free to move in any direction), but my first play was at two players and I’m beyond curious what it would feel like with four or five cars on the board. I have a feeling it would be decidedly more tense with the patrol car lingering about and chasing everyone who puts the pedal to the metal.