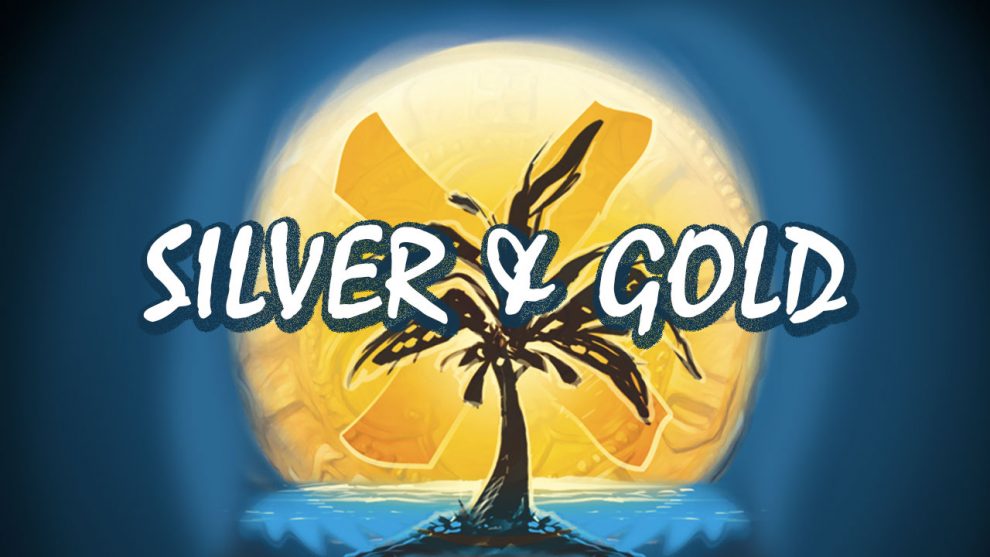 Ya’rr mateys, it’s booty we’re after; treasure! Gold, silver, and precious gems of all sorts. Get movin’ ya’ scallywags. Grab yer dry erase pens and get to marking!

That’s right, Silver & Gold is part of the booming trend of roll and write games (or in this case “flip and fill”). Veteran designer Phil Walker-Harding is here to offer his take on this hot new style of game, and this one’s a doozy; as sweet as stolen grog. So gather a few of your friends around the table for an adventure on the high seas that’ll end with one of you finding the most treasure, while the others will head back to the ship with their tails between their legs like a scurvy dog.

Yo ho, and up she rises! 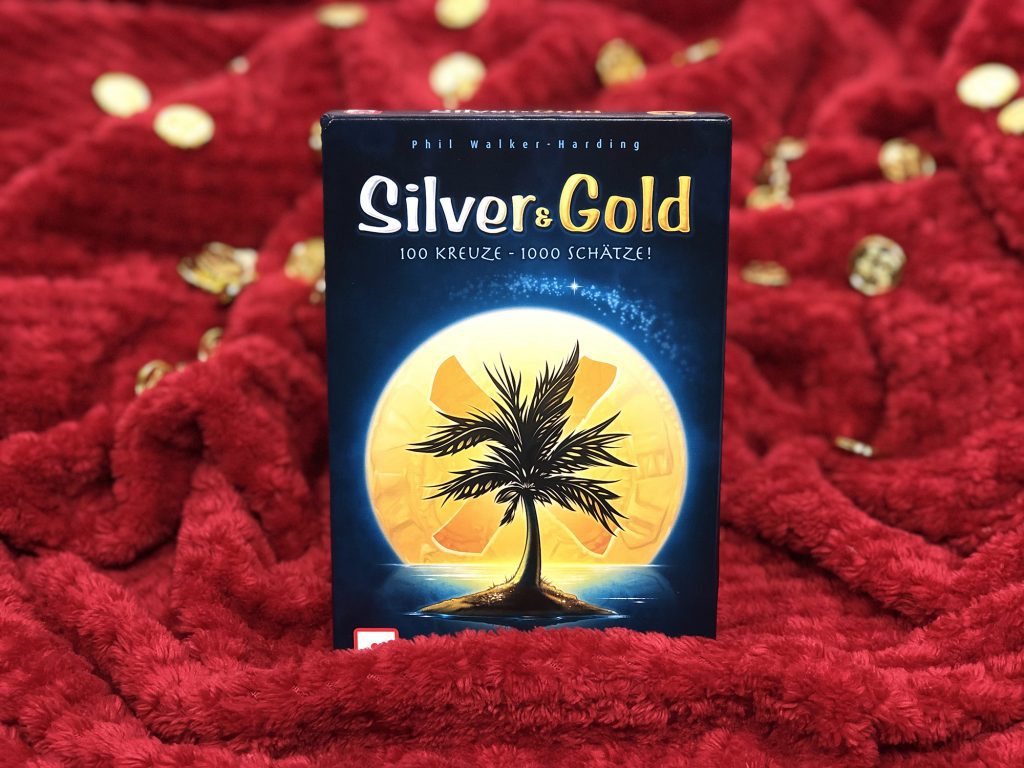 Silver & Gold is a Tetris (or polyomino) style fill and flip game (similar to roll and write) in which players mark off spaces on their treasure maps in order to earn points. Along the way players will collect gold doubloons, cut down palm trees, and hopefully find the elusive red “X” that marks the spot. Silver & Gold is easy to teach, and plays in under 20 minutes, so let’s dive in and get a quick overview.

How to Play Silver & Gold

Silver & Gold is a simultaneous action game; at the beginning of each turn one player will flip over a shape card and each player must mark that shape on one of their two treasure cards. 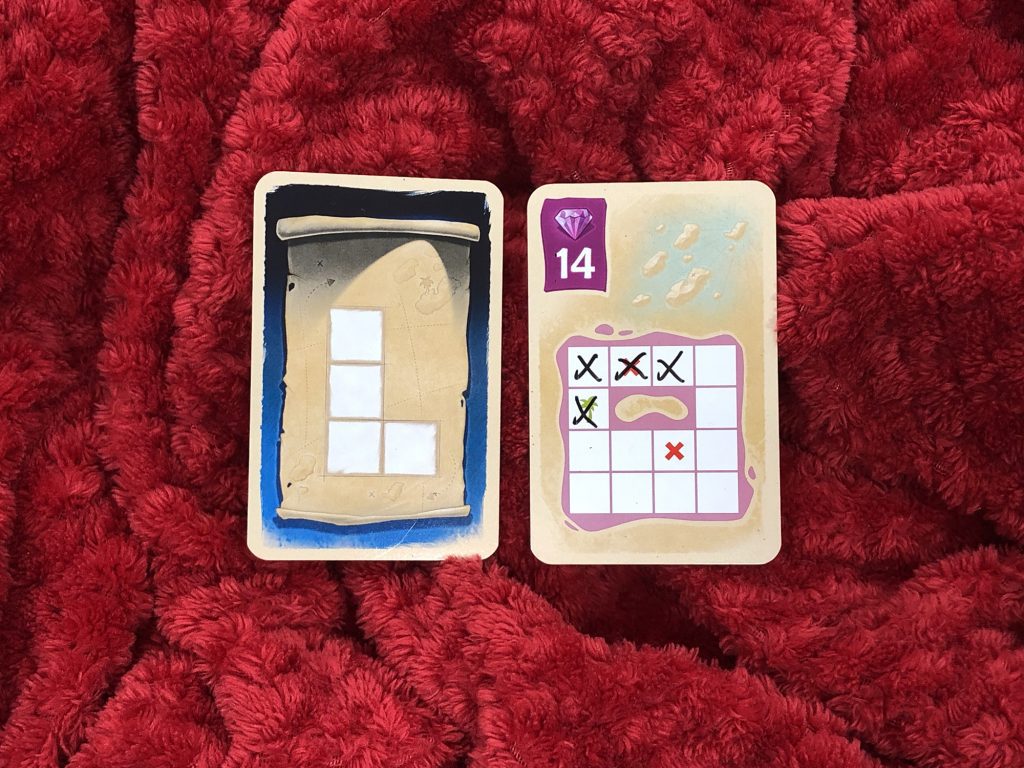 If a player ever can’t or doesn’t want to take that shape they can always choose to mark off a single square on either of their cards.

As players mark off shapes, they’ll be crossing out gold doubloon, red “X”, and palm tree icons. Each of these icons gives players an immediate special ability.

When crossing off a doubloon, players will immediately mark that on their personal score sheet. Each coin collected will be worth one point at the end of the game, and as players finish a row of 4 coins, they’ll be able to collect the highest available trophy displayed on the round tracker.

As players mark off a red “X” they’ll be able to immediately fill in one additional square on either of their treasure maps, including that of another red “X”. Clever combos can allow players to fill up quite a few additional spaces on their card.

Crossing off a palm tree gives an opportunity for bonus scoring. Tally up the marked off palm tree, along with any visible palm trees on the 4 face up cards in the center, and mark that on your scorecard. Players can do this up to 4 times.

After all spaces on a treasure map are filled, players set that card aside and draw a new one from the center of the play area. At the game’s end players will receive the points indicated in the top left corner of the card, along with bonus points as seen in the top right corner of some cards.

While Silver & Gold turns are taken simultaneously, collecting trophies from coins and drawing new treasure map cards are taken in turn order, starting with the player who flipped over that turn’s shape card.

A round is over after 7 of the 8 shape cards have been flipped over. Shuffle the shape cards, update the round tracker, and continue until you’ve played 4 rounds. 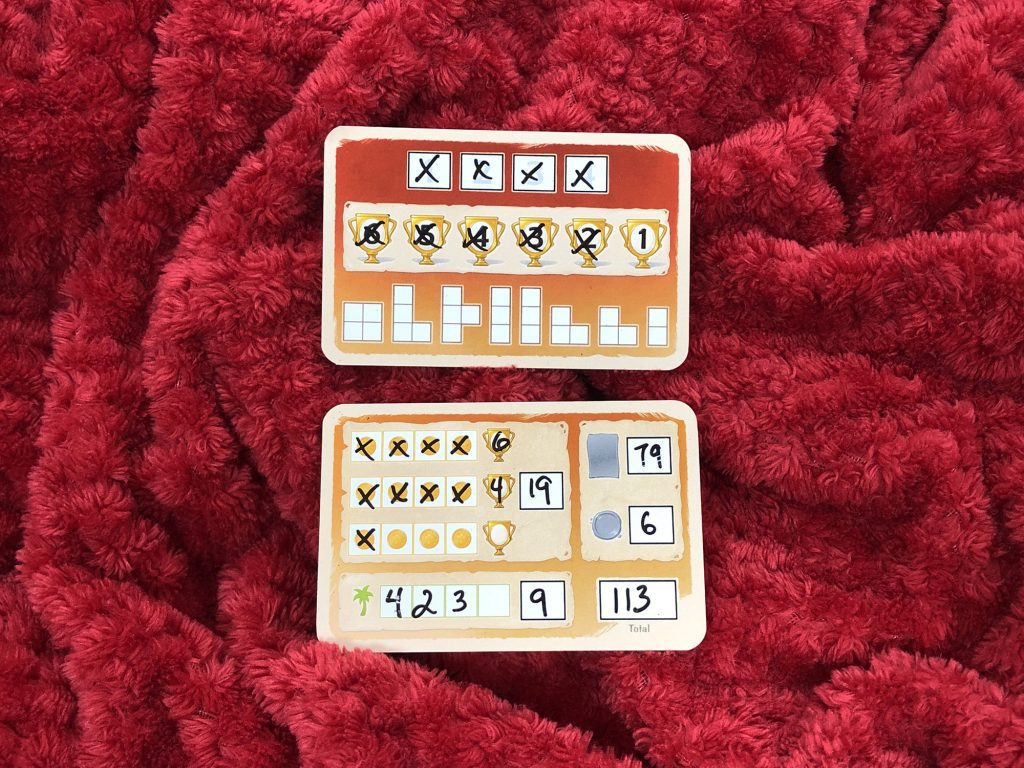 I won’t lie, even before actually playing the game, Silver & Gold was pressing all my buttons. Polyomino game? Check. Roll and write? Check. Designed by Phil Walker-Harding, plays in under 20 minutes, and super portable? Triple check! So what do I think about Silver & Gold? I love it, and everyone I’ve taught it to so far loves it as well.

Let’s talk about the components, because that’s one of the coolest factors. Silver & Gold lets you draw directly on the cards included in the game. Each of them has a smooth slick surface which allows players to write on the cards and erase them easily. If you’re one of those people who laminates your roll & write sheet, have I got good news for you: you don’t need to with this one! I’ve played about ten times so far, and all of the cards easily brush off the dry erase markers. Use your finger, use a napkin; whatever.

Because the marking action is simultaneous, the gameplay in Silver & Gold is streamlined and quick. The only time you might have a delay is when someone over-analyzes their shape placement or if multiple players have to get trophies or treasure maps on a turn. While it doesn’t happen often, you’ll likely have it happen to you a few times during a game. Remember that you’ll be turning over 28 shape cards.

Silver & Gold certainly isn’t a deep game, you’re doing the same thing on every turn, so players that require variety might not find this one appealing, but I think that issue is balanced out by the short game length. Once everyone knows what they’re doing, you can probably finish 2 games in under a half hour.

While Silver & Gold is certainly not the first published roll & write using polyominos (Brikks and Second Chance come to mind), it’s easily one of my favorites of the genre. It offers just enough puzzliness to be interesting, while not forcing you to perform geometry in your head to make the shapes fit. The quick teach time (5 minutes tops) and portability means that you can introduce it to anyone just about anywhere: play it at a pub, office, school, or kitchen table. Travel back in time and help build the bone church. Check out our review of Skulls of Sedlec, the newest 18 card game from Button Shy. 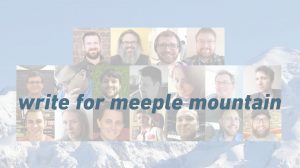 If you love board games, and writing, then come write for Meeple Mountain. We're happy to announce out first official call for contributors.