Andy Matthews @commadelimited
Add Comment
In First Take Fridays we offer hot takes on games that are new to us. This week we have That’s Life!, Rococo (Deluxe Edition), Turncoats, Recto Verso, and Mindbug.

A roll-and-move game across tiles set out numerically in a path. Two sets of numbers are negative, one set is positive, and one set is clovers that start with tokens on them. If you are the only/last person to move off of a tile, you capture that tile and the positive/negative points that go along with it. Tiles with tokens on them are not captured, which makes taking the clover tiles harder (clover tiles allow you to change a negative tile to a positive one), but can make the second group of negative tiles easier to manage since you must cross over them to end the game.

A good filler with several variations. It plays quickly with multiple pawns per player, you have some agency over what happens on each roll of the die. 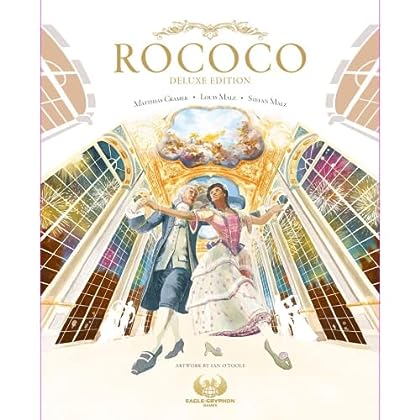 Straight out of the reign of Louis XV, Rococo is the game of fancy tailored garments. The more recent Deluxe Edition is the overproduced game of fancy tailored garments—and I love it. Players lay out employees each turn to perform one of six available tasks to collect resources, use them to make swanky clothes, sell them or rent them out to the various ballrooms, and arrange to support various decorative extras at the ball.

I really enjoy the multi-tiered mechanics. With employees, certain actions are available based on the employee’s status, but they also come with a bonus action to add a layer of decision-making. For garments, each can be sold outright for cash or rented for endgame points and a shot at the area majorities in each ballroom. The scoring is unusual because your token will hover near zero for most of the game, only to explode for many (many) dozens at the end. The art is fantastic. I might have shifted some of the deluxification budget: the yarn and lace are wasteful as 3D bits, and a few more 1 Livre coins would have helped in the 4-player outing. But overall this is a solid little puzzle that is worth checking out.

Even though we were playing the game Turncoats, Matilda Simonsson’s abstract take on warring factions and political influencers playing all sides of a conflict, everyone kept saying the same thing between turns:

“This feels a lot like The King is Dead.”

And, Turncoats does feel a lot like The King is Dead, or Pax Pamir 2E, or what I’m told Pax Renaissance is like. (I haven’t played the latter.) Turncoats is a handmade affair with a cloth mat and stones in three colors and simple rules, so it’s easy to get to the table; we tried it at five players, which feels one player north of just right. That said, the ending, where you find out if one player has been able to push one faction into the lead through an area control mechanic, is a blast to see who’s holding the most of the color with the lead on the map. 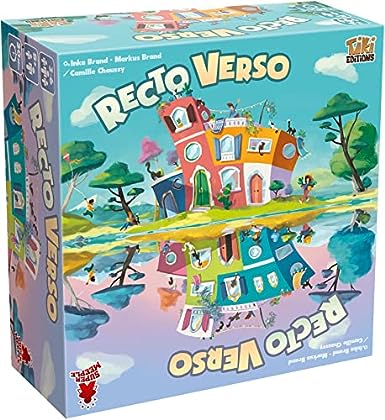 Recto Verso (which means “front back”) is a high pressure dexterity/spatial recognition/semi-cooperative game about working with a teammate in order to stack colored wooden blocks on top of eachother to match the image presented on a card. The faster the players are able to accomplish this, the more points they earn. Every player will have the opportunity to pair up with every other player exactly one time over the course of the game. Once the last pair up is finished, players tally up the points they’ve earned, and the player with the most points wins.

This game was a lot of fun. Even the players at the table that typically don’t do well at these kinds of games enjoyed themselves. Even when it’s not your turn, you’ll find yourself captivated by the action taking place between the active players, silently rooting them on.

I’ll admit it, when I initially proposed this as a game to play, I wasn’t sure it would go over well. It looks pretty simplistic. But there’s nothing simple about it. We played the game on easy mode and it was certainly challenging. The advanced mode adds in an extra block and I am excited to find out how that plays out.

Late last year, Andrew Lynch reviewed Mindbug, a light card tactical card game co-designed by Richard Garfield of Magic the Gathering fame. Mindbug’s presentation is about as basic as it can get: a single deck of 52 cards (4 “mindbug” cards, and 48 creature cards), however Mindbug is anything but basic. The premise is simple: knock down your opponent’s health to zero using creature cards. Each player starts with a hand of 10 cards, 3 health points, and 2 mindbug cards (which can be used to steal a single played creature from the other player). And speaking of creatures; how can you not immediately love a game with cards like Compost Dragon, Gorillion, Kangasaurus Rex, and Explosive Toad? Cards have a numeric strength used to compare against in attacks, characteristics like Tough, Sneaky, or Poisonous, and also “trigger” actions which occur when a card is first played, used to attack, or even when the card is defeated in battle. My 10yo son and I played a game, and immediately played another–resulting in a 1 to 1 tie. We loved it so much we’re saving the final showdown for a future date when both of us have time to prepare. The only thing I dislike about Mindbug is the tuck box and tiny rulebook. But it’s a small price to pay for having such power at your fingertips!