Tom Franklin @fivecatslairdfivecats
Add Comment
A selection of my choice of gateway games from my collection. YMMV, of course.

Then you show them your collection. After they recover from seeing exactly how into board gaming you are, they say those magic words you were hoping to hear:

“Want to play something?”

What comes next is crucially important. You know you need to choose just the right game: something that’s fun, approachable, easy to learn, and doesn’t take too long to play.

Now, your collection and your choice of games will undoubtedly be different from mine. That’s fine. In fact, I invite you to add the Top Six Gateway Games from Your Collection in the comments at the end of this article. I’m genuinely interested in your choices.

Here are the Top 6 games I’d reach for, based on my preferences and my collection.

You’ve played Dominos, right? These are hex-shaped dominoes with colors/shapes instead of numbers. We’re going to place them on the board and score points for every series of matching colors in a row. Yeah, the scoring takes a little getting used to, but it will make sense after a few turns.

Oh, and I should probably mention that your lowest scoring color is your final score. Clever, eh?

“That was fun,” your friend says. “Have anything else like this?”

Funny you should ask. As a matter of fact, I do!

YINSH
Remember Othello? This is a game where you move your rings across the board, flipping pieces over along the way. You’re trying to get five of your colors in a row three separate times. The catch is, each time you do, you lose one of your rings.

Blokus Duo
These connected squares make up shapes called pentominoes. We’re going to connect them to each other on the board only at their corners. I’ll warn you, the board is going to fill up pretty quickly and we’re going to be weaving our pieces into the spaces between each other’s pieces.

We’ll start by taking these chips with gemstones on them. Then we’ll trade them in for cards, paying one chip for each gemstone on the card—but get this: when you buy this card with the Ruby in the top right corner, that’s one less Ruby chip you need to turn in to buy a card with a Ruby on it. Cool, huh?

Azul
Yes, I know they look like Starburst candies, but they’re really tiles. You’ll take a set of them from this common pool and position on one side of the board to move over the other side. Only you don’t want to take any tiles you can’t use.

Wingspan
How’d you like to run your own bird sanctuary? Every bird you add to each environment gets you better deals on the things you need. Plus, when you take that environment’s action, you’ll also get to take the actions of the set of birds there. Cool, huh?

For every marble you place on one of the rings that make up the board, you remove an empty ring from the outer edge of the board. This shrinking of the board starts slowly, then, after five or six turns, your placement of marbles and the pieces you remove start to matter a lot more. Now, you’re really having to think about each move, trying to force the right jumps without being forced into giving your opponent the marbles they need to win.

Hey, That’s My Fish
We’ll start by placing our hungry penguins on the board atop any of the hex tiles that have just one fish on them. Then, we’ll pick up the tile they’re sitting on and move them in a straight line to another tile. You’re going to want to go after the tiles with two and three fish and, no, you can’t jump over the holes in the board.

Survive: Escape from Atlantis
So, we’re all on this island, okay? And it’s sinking. We need to get off it as quickly as possible and get to another shore. Getting in one of the boats is a good idea, because there are sharks in the water that will eat your people. Although, the giant squids can snatch you out of a boat and those sea serpents can crush boats and everyone in them. But, hey, the friendly dolphins might help you get to land. 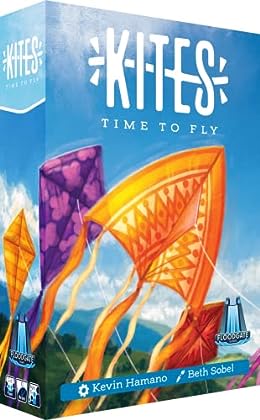 Did I ever tell you I was the night manager of The Kite Site in Georgetown back in the 80s?

So, here’s a game about Kites that we’re going to play together against the game. Our job is to keep the sand running in these seven sand timers by playing kite cards to flip them over. We’ll win or lose together!

Burgle Bros.
Ever wish you were one of those slick people pulling off the heist in Ocean’s 11? Here’s your chance! We’re part of a crack team set to break into a safe on each floor of this building and then escape onto the rooftop before the guard spots us too many times.

Pandemic
Over the past few years, did you ever wish you could try to save the world from a virulent pandemic? Well, now’s your chance. We’re specialists working together to beat the game by finding cures for four viruses before the world is overrun by disease. 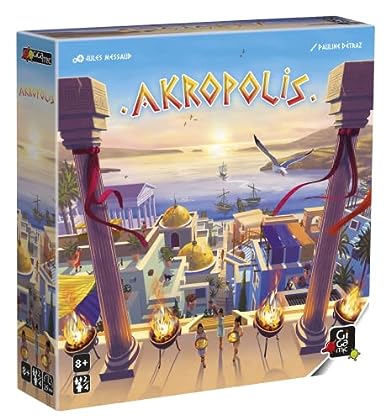 Every turn you’re going to choose one of these tiles and add it to your city. You keep building your city, making sure each of the different building types are where they need to score. Oh, and you can place a new tile on top of other tiles to score more points. It’s really neat how your city grows, isn’t it?

Carcassonne
We’re going to take turns choosing a tile and adding it to the board. We’re going to be building roads, castles, abbeys, and fields as we expand the city. Along the way, we’re going to be claiming those landmarks with these cute little wooden people known as meeple.

We’ll score for each one of those as the game goes along and when you score, you’ll get your meeple back. The exception to that are the fields. You’ll score for each connected, completed castle, but they remain in the field until the end of the game.

And, why yes, I do have more tiles, now that you mention it*.

Isle of Skye: From Chieftain to King
We’re still going to be laying tiles, but now we’re going to have to bid on them. You want tiles with roads connecting to your castle, and these different features. The thing is, you’ll need to buy any tiles you put up for auction that don’t sell and different things will score at the end of each round.

I know friendships are built on trust and honesty, but this is a game where we’re all going to lie to each other. Or not. And that’s just part of the fun, okay?

You’re going to take one of the ugly critter cards from your hand and place it face down on the table. You then slide it in front of someone else and tell them what bug it is. They’ll have to guess whether you’re telling the truth or not. Or, they can take a look at the card and pass it to someone else, telling them it’s the same bug or a completely different one. If the last person to get the card guesses if the last bug named is true or false correctly, the bug goes to the person who gave it to them. If they guess wrong, they keep the bug. Get a set of four of the same bugs and you lose.

Get a copy from Amazon
Skull Everyone around the table gets the same set of four, circular cards. Three will be flowers and one will be the Skull. We’ll start by placing any card face down on the table. Once everyone has done that, we’ll either play another card face down, or say the number of cards you think you can reveal on the table without revealing a Skull. Everyone else can either say a higher number or pass. Whoever wins the bid has to start with all of their cards first, which makes it a bit tricky.

Guess right twice and you win. Lose a round and you’ll lose a random card from your hand.

And, yeah, I know they look like drink coasters. That’s part of the charm!

Spyfall 2 We need a big group of people for this one. Everyone gets one of a set of cards. Maybe it’s a circus scene, maybe it’s in outer space, maybe it’s in a jewelry shop. Everyone except one person, that is. They get the Spy card and they’ll have no idea what’s going on. One at a time, people will ask another player a question about the scene to try to figure out who the Spy is. Keep in mind, your questions need to be vague enough so the Spy doesn’t catch on.

* As my weekly gaming group will attest, I’m a huge fan of Carcassonne. So, why isn’t this the game I’d pull out to introduce someone to tile laying games? Because I believe Carcassonne should be played with as many tiles as possible. I have two copies of the base game, and the majority of the major expansions are all crammed into one very overflowing box. That amount of tiles would intimidate anyone new to games. To have Carcassonne be a first choice gateway game from my collection would mean adding a third base set of tiles and keeping them separate from the rest of its brethren. And that’s just not going to happen.