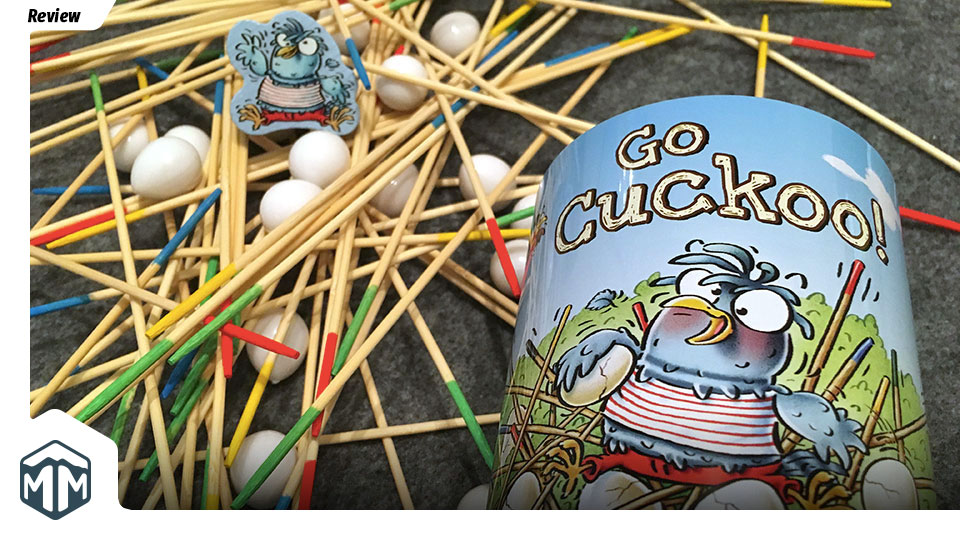 The Stress of a Bird

I can only imagine how terrifying the life of a mother bird must be. I mean, she has to build and host all of her precious eggs in a nest made out of tiny sticks and twigs. Her nest is perched high up off of the ground and there are only a few of those twigs keeping them from falling to their end on the hard ground. Seems like a pretty stressful job to me.

Who ever thought that would make a good game?

The geniuses over at HABA, that’s who. 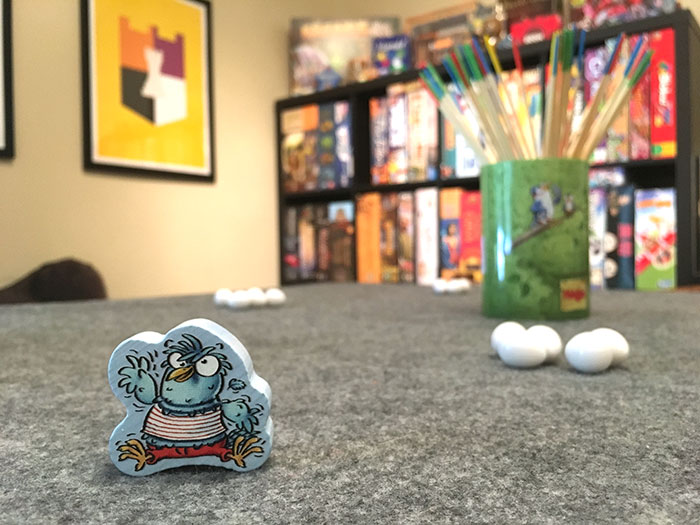 Go Cuckoo is a surprising little dexterity game that I found at Gen Con this year. It’s a game true to form for HABA in that it’s a deceptively simple children’s game that is hiding its true nature of actually being a fantastic game for adults. HABA has way of making very silly concepts where you do things like stack animals on top of each other until they fall or build a tower of cards that eventually gets so high you can’t help but knock it over. 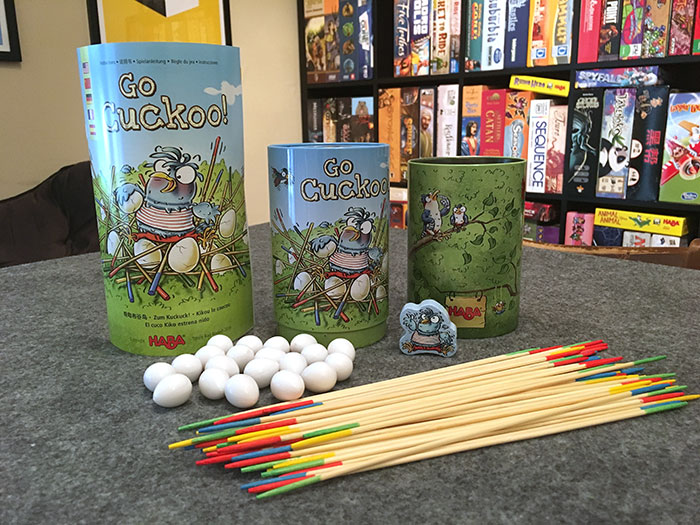 These games have a hint of magic to them that is extremely hard to explain without having the person play them. Trust me, you might look like a fool playing them, but you and your group will have so much fun that it won’t even matter.

In HABA’s newest endeavor, you are a cuckoo bird who is trying to build a nest that will safely hold all of your eggs and keep them from falling down to their premature death. (Honestly, 200 years later and we still haven’t learned anything from Humpty Dumpty about placing eggs up high?) 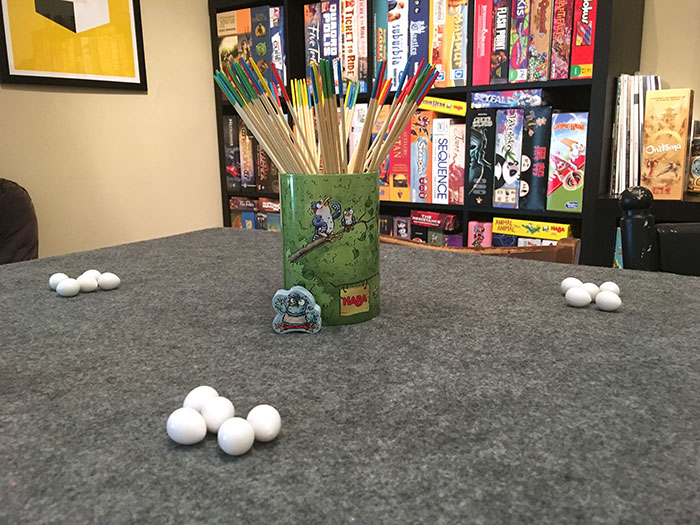 The game progresses by each player drawing up to three sticks, one at a time, and then precariously placing them in the nest. When you draw a stick, you check the color on the bottom end and then draw another stick of that color. If you draw one with the same color on both ends, you stop drawing and place them. Assuming that you drew one with matching colored ends, you get to place an egg in the nest after placing your sticks. Once a player places all of their eggs, on their next turn, they get to take the big wooden cuckoo bird and attempt to also place it in the nest. If they can place the bird without making any eggs or sticks fall, they win the game. 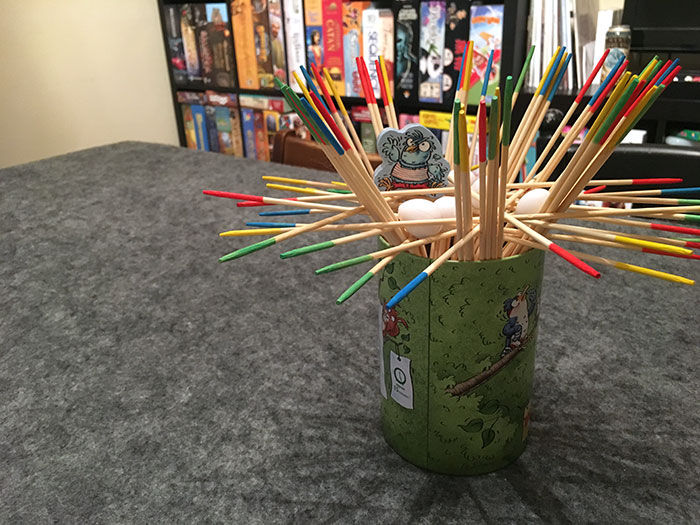 Seems easy enough, right? Ohhh, but this is where it gets good! If, at any point in the game, you make an egg fall to its untimely death, you have to take an egg from whoever has the most eggs. This creates a tension for each player in placing their sticks. You don’t want to make it too easy for the next player, but you do want to make it easy enough for you to place an egg. 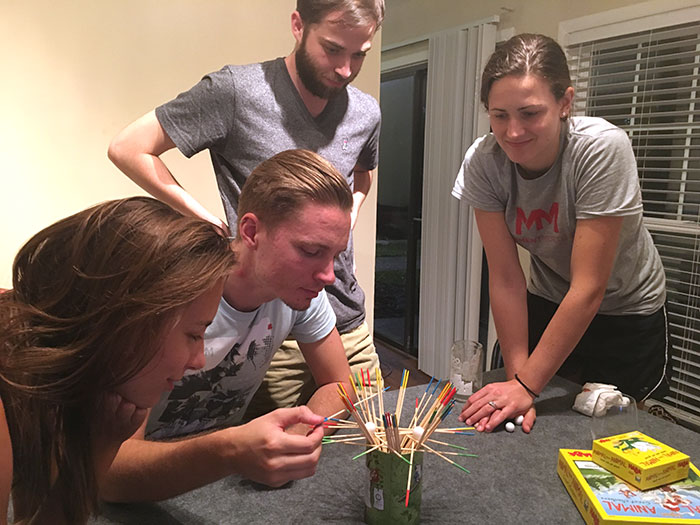 The way that you pick sticks also brings out many interesting moments. Since you have no control over the color of stick that you pick for your second and third pull, sometimes you are forced to grab a stick that is in a very unfortunate spot. Once about half of the sticks have been placed, suddenly each player is put in a spot where they have to grab one of those little red sticks that happens to be holding up a couple different eggs. That can make for some great moments.

Trust me, this game isn’t easy. Sure, it looks like something you’d find at a Sesame Street gift shop, but oh no. It is so much more. 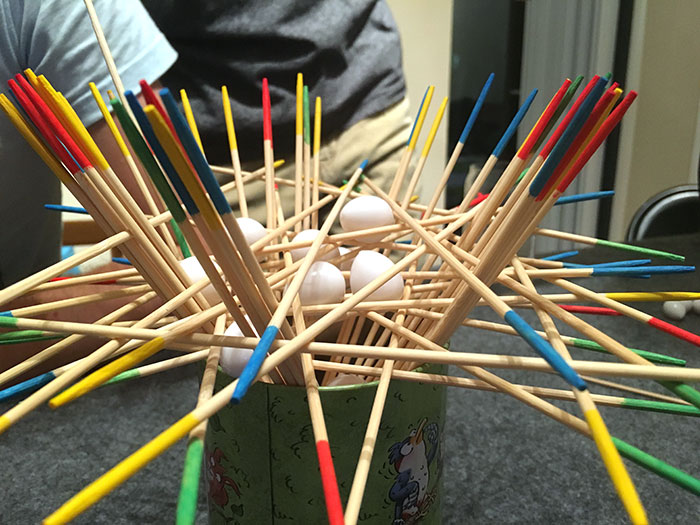 Everytime I play this game with other adults, we all find ourselves zoned in on the person carefully placing their stick or egg onto the nest. It produces the same tension as a game like Jenga where everyone is leaning in, just waiting for the “straw that broke the camel’s back” moment. And you know what? Those kinds of moments have been some of my most memorable moments in all of my gaming history. 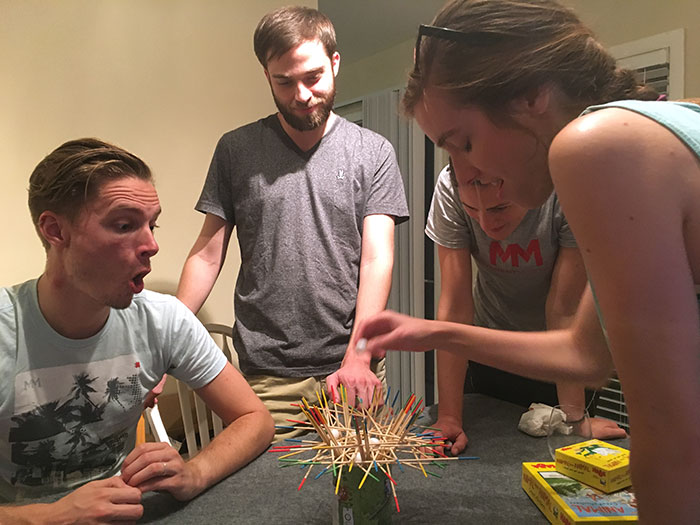 Whether you drop the egg a little too hard and all of the eggs collapse into the can or you place it perfectly in a precarious stack, you’ll look up and realize that everyone else has been participating in the stress of the moment with you. Either everyone will start their “oohs and awes” or they will all begin laughing hysterically. One thing you will know without a doubt, though, is that everyone is having a good time.

And isn’t that what this is all about anyway?

What do you think about Go Cuckoo!? Give us your opinions about what you like and/or dislike about the game in the comments below! If games like this pique your interest, go check out our Top 6 Dexterity Games article to see some others that you may enjoy!