Elijah Longwell @elilongelilongwell
Most people grew up playing games like Jenga, Pick-Up Sticks, and Twister, but there are so many better options available now! Dexterity games have grown and evolved quite a bit over the years, so check out my Top Six dexterity games to see which ones are my favorite!

I don’t know what it is about these games, but I just can’t get enough of them. When I first started playing boardgames I though that dexterity games were silly and pointless. Wow, was I mistaken! Some of my favorite experiences have come from these games and though they may not be as deep in strategy as other games, they provide opportunities of pure joy that other games can not touch.

I guess I should probably explain what exactly this category of games is. Dexterity games are games in which players use dexterous actions and skill in order to outplay and/or outlast other players. Basically, these games are all about using your hands (or various other body parts) to accomplish a challenging action. That could mean stacking blocks on top of each other, flicking bits toward a target, or carefully removing blocks from a larger stack. Dexterity games are much more common than you may realize. Some mainstream examples would be games like Jenga, Darts, Pick-up Sticks and even Twister. 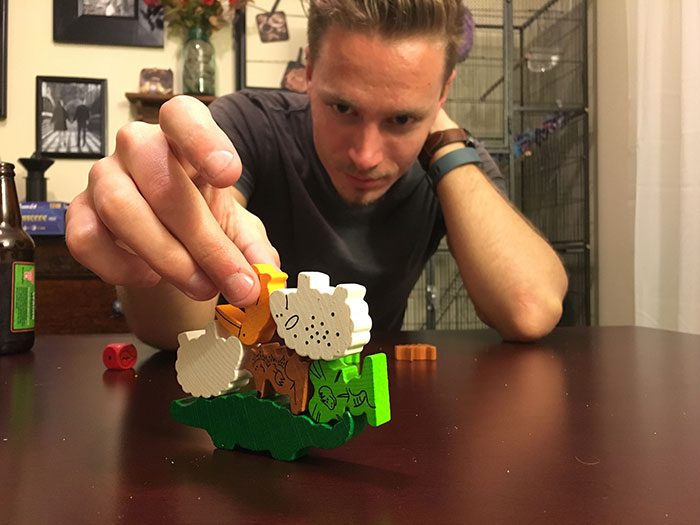 There is something distinctly human about dexterity games that really draws me to them. Strategy games build over the course of an hour or two and take intense thought and effort. Dexterity games often build tension quickly and then allow that tension to crash (sometimes literally) into a single moment of hilarity and elation. The great thing about them is that they allow you to feel that over and over again through the course of a game.

Clearly I love these games. So which ones are my favorites? Let’s find out! 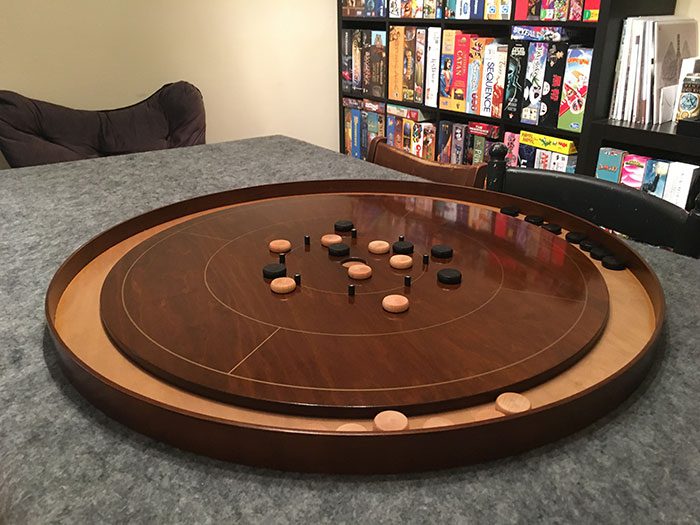 Crokinole is sort of the flagship game for dexterity game lovers. It’s origins date back to Canada in the 1870’s and it has quite a legacy. It is a simple “flicking” game in which players go back and forth flicking small pucks into the middle of a circular wooden board in order to get points. There are three “rings” that score more points depending on how close to the middle your puck stops. If your puck lands in the center hole, you are rewarded with bonus points and you remove your puck. What makes this game so interesting is that when you flick your puck from the outer line you must touch one of your opponent’s pucks (if any are on the board) or your shot doesn’t count. This gives the game a tension and back and forth flow instead of the game turning into “Who can get the closest to the middle?” There is both strategy in which pucks you hit and skill in how you hit them.

The biggest barrier to entry with this classic game is that boards are not readily available. In order to get a board, you must have one hand made for you which is not cheap. (There are a few mass produced ones, but they are not very good in comparison.) Furthermore, most of the best Crokinole board creators are located in Canada which means shipping is not cheap (speaking from the perspective of someone in the US). Some of the best board makers include Muzzies, Hilinski, and Willards. You can sometimes find someone locally that makes them as well, but it just depends on where you live.

Regardless, this is one of my favorite investments I’ve made into the hobby and I think every collection should have one. 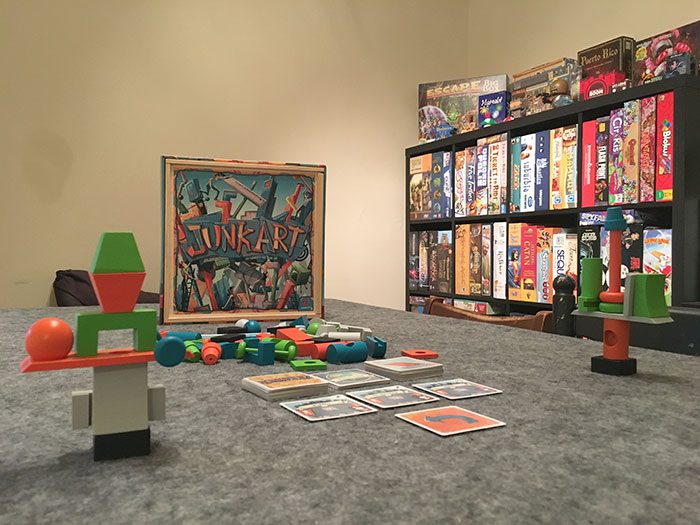 Junk Art is a simple game of stacking weird shapes on top of each other. One of the things I love about it is that it has a ton of different variety right out of the box. There are ten different game modes that each feel very unique from each other. Some have you racing the clock to be the first to use all your pieces, while others have you building on one collective structure, trying not to be the one to knock it down. On top of the multitude of game modes, the game also has beautiful components with vibrant colors. As usual, Pretzel games has been able to put out a phenomenal product with high quality wooden pieces. 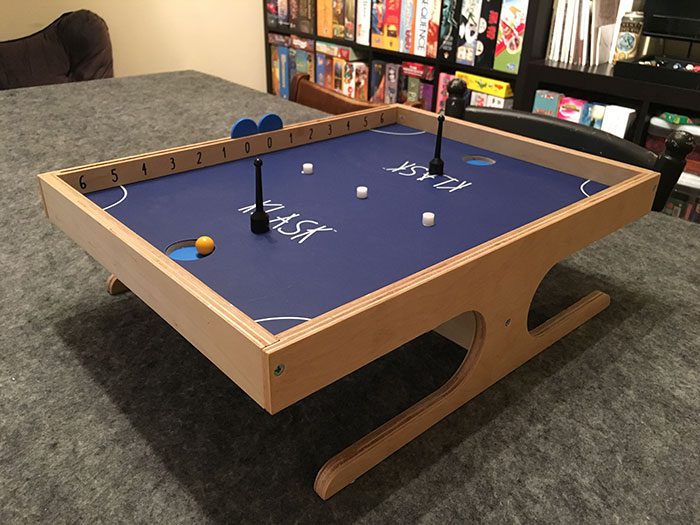 Klask is a beautiful two-player game from Denmark that pits two players against each other in an intense back and forth game where each player is trying to score goals. Think air hockey, but your mallet is controlled with a magnet on the underside of the table. Players hit the ball back and forth, trying to get the ball in their opponent’s goal, while also watching out for the three center magnets. If you get two of the three stuck to your mallet, your mallet gets stuck in your goal, or your opponent scores the ball, they get a point. The first to 6 wins! It’s a pretty simple game, but it allows for lots of tense and interesting moments. Similar to Crokinole, it is also a great game to display in your gameroom. Klask is often one of the first things people ask about when they see all of my games. 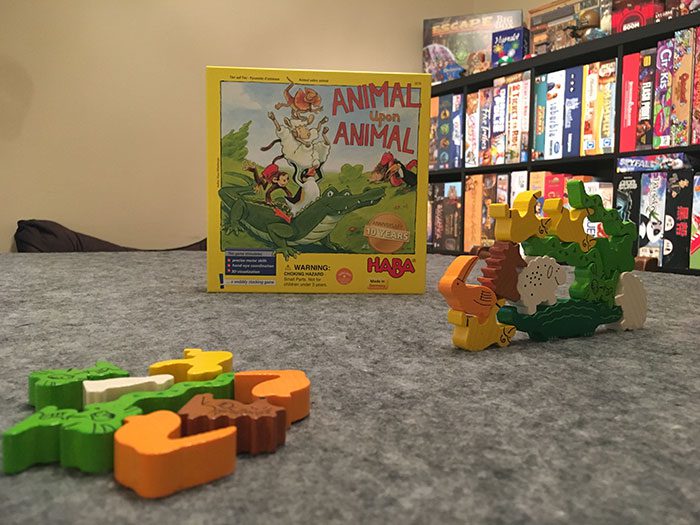 Animal Upon Animal is a classic in the world of dexterity games. This simple game has you stacking up animals from your supply in hopes that you can get rid of all of yours before anyone else. Of course, knocking them over means that you will have to take some for yourself! Sure, it is marketed as a kids game, but let’s not kid ourselves, adults love it! I’m convinced that HABA secretly makes games for adults but just markets them to kids. They are all so good! 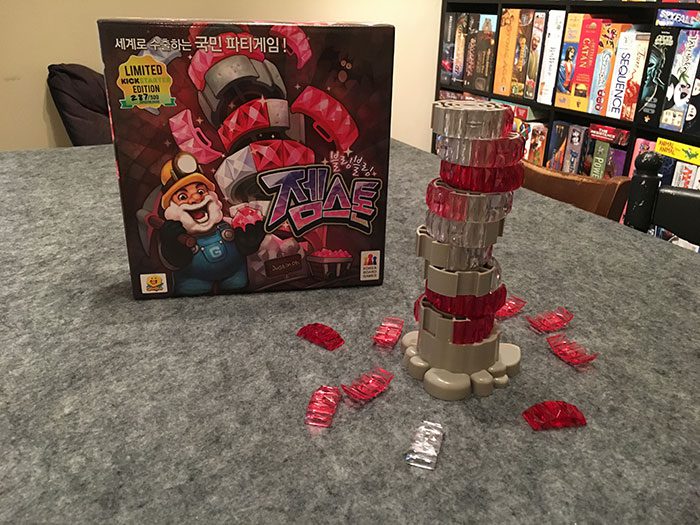 No matter which name this game takes, it will bring a smile to the table. This is a Korean game in which you knock gems/bark off the side of the stalks with a small axe in order to get points. The trick is that if you knock off the center pieces, you lose points. I own Bling Bling Gemstone (which was a small run retheme of the prior versions that was made through Kickstarter) and absolutely love it! I have yet to bring this to the table without everyone enjoying themselves. One of the great things that it has going for itself is that it reminds people of Jenga, which makes it easy to teach. If you ever see a copy of Bling Bling Gemstone for sale, snatch it up as there were only 1,000 ever made!

Note that since Bling Bling Gemstone was a limited run it’s more expensive. Toc Toc Woodman is currently only $26. 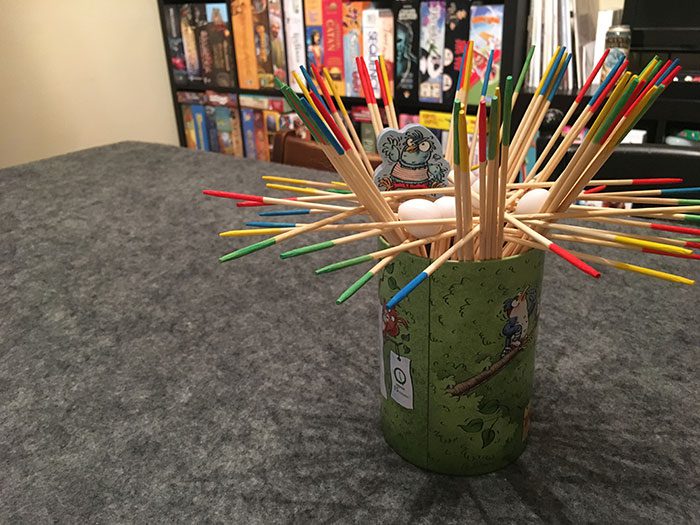 Ahhh, the newcomer! Go Cuckoo is HABA’s newest release which came out at Gen Con a couple weeks ago. I absolutely love this game! It is always a hit when I bring it out and rarely can we just settle for one round. Players pull up to three sticks until they find one with two matching colored ends. Once they do, they stop, place the sticks, and have the option of placing their egg. The first player who gets rid of all of their eggs and places the cuckoo bird wins! The way this game is designed is genius. It has a great balance of trying to make it easy enough for you to succeed, but hard enough for your opponent to fail. HABA is one of my favorite publishers due to the way they publish games that are secretly adult games. Though they certainly look childish, I promise you can have just as much fun with one of their games as you could breaking out your favorite Euro. A different kind of fun, sure, but just as much if not more of it!

Unfortunately, HABA pretty much sold out of their stock at Gen Con, but there are more on their way to the US right now! Check back over the next couple weeks and we might just have a way to help you get your hands on one… 😉 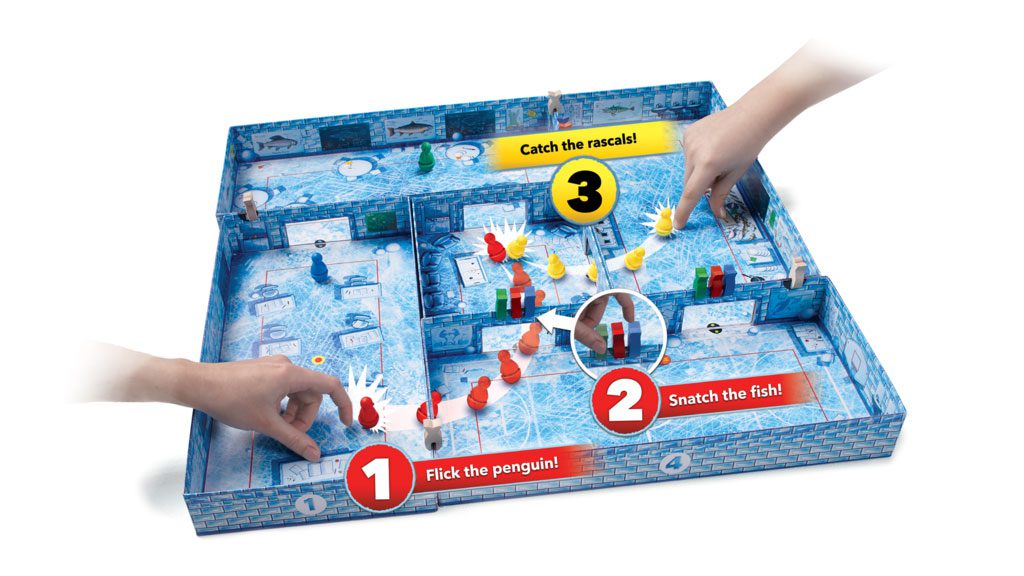 I’ve had my eye on this one for a while, but have not been able to actually play it yet. Ice Cool is a game in which you flick little weighted penguins (think skinny weeble wobbles) in and out of rooms collecting fish. One player controls the “hall monitor” and tries to keep the other players from succeeding. All-in-all, this game looks like tons of fun. Hopefully I’ll get a chance to play it soon. 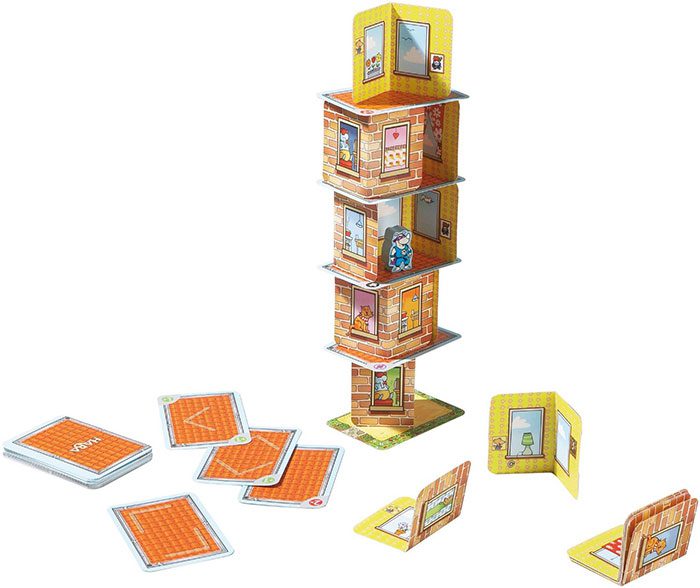 Yet another HABA game! Apparently this one was a smash hit that went completely under my radar. Players stack up an ever growing tower with all different kinds of placement cards. Many cards require you to move the Rhino Hero from one floor to another, and as you probably guessed, the goal is to not be the player to knock it all over. In researching this article, I found this gem and went ahead and ordered a copy for myself. It looks like tons of fun and it’s less than $15! I’m looking forward to giving this a try later this week. 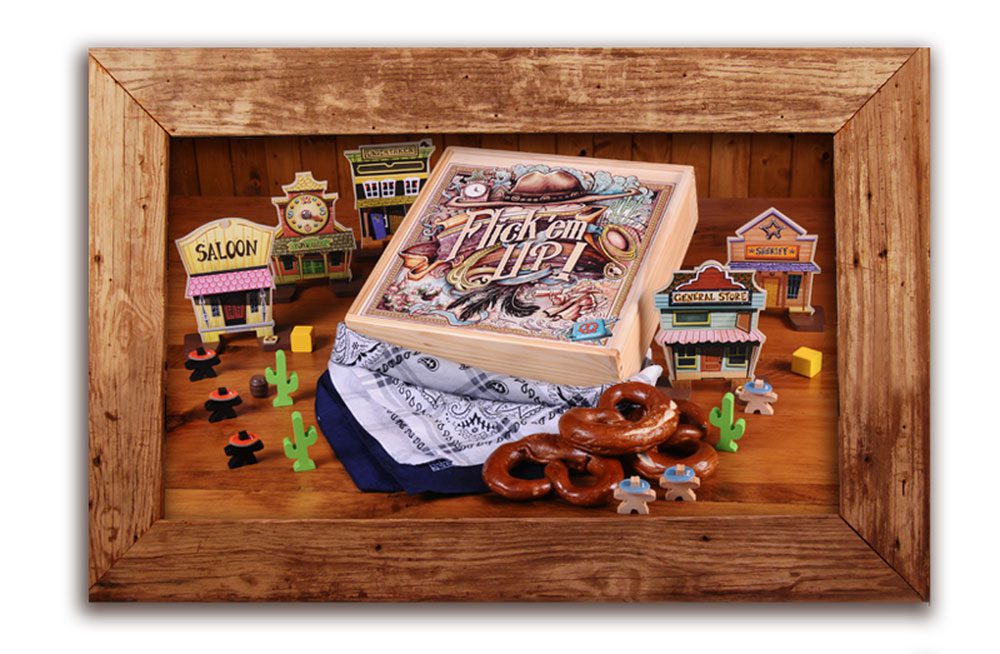 Flick’em Up is Pretzel Game’s (Junk Art) first game they published. In it, each player controls a number of either cowboys or outlaws who duke it out under the high noon sun. There are tons of different scenarios to play and the game has “build your own scenario” mode which is tons of fun. 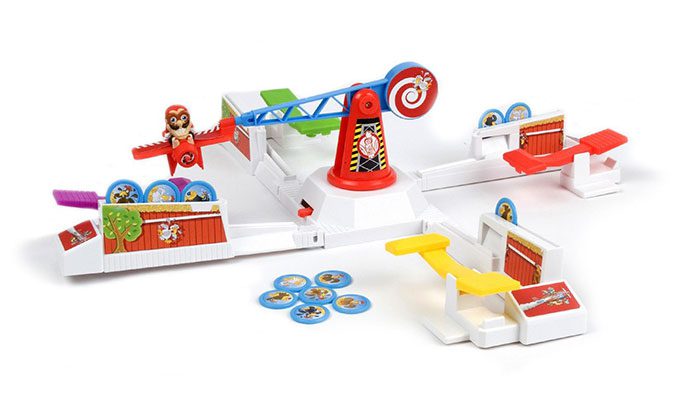 Ok, this one actually is a kids game. Still, it is oddly fun. Each player will hit their lever in an attempt to keep Louie from stealing his chickens as he loops around the table. I will give a caveat that the original printing from the 90’s is much better mechanically than the new one, but if the new one is all you’ve got available, it’s still worth grabbing. Heck, I don’t even have the older version because it’s so hard to find! It is also worth checking out Loupin’ Chewie, which is a Star Wars retheme for 3 (instead of the normal 4) players. Both games are about $15, so they are very approachable and affordable.

What are some of your favorite dexterity games? Let us know in the comments below! 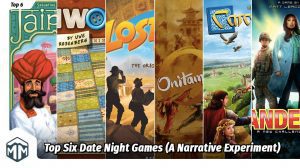 I’m trying something new and experimental this week. Come check out my Top Six date night games with a twist! This Top Six list comes in story form! Read on to... 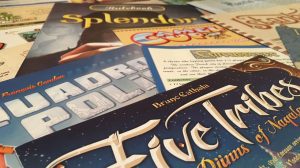 Teaching a new game can be a challenging endeavor. A bad rules explanation can ruin a game while a great one can create a new favorite! Read on to find some... 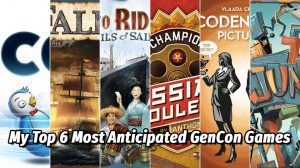 Gen Con 2016 is right around the corner. Let's take a look at the Top Six games that we’re most excited for! 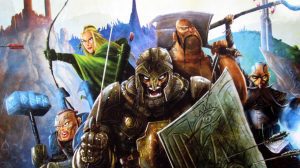 Sometimes a game knocks another off the shelf for you. Valeria Card Kingdoms did just that for us! Read our review to see what game it replaced and why it took...