Cosmic Factory Review – The Galaxy At Your Fingertips

Cosmic Factory, which was originally released under the name Kaosmos, is a real-time tile-laying, drafting game designed by real-time game master Kane Klenko.

Cosmic Factory is actually a re-imagining of Klenko’s first published game, Mad City. Some of Klenko’s other real-time games include FUSE, Flatline, and Pandemic: Rapid Response.

In Cosmic Factory, players are trying to arrange and optimize their 9 tile galaxy. They earn points for coloured zones with planets and for the length of their asteroid path. Cosmic Factory is played over 5 rounds with each round consisting of Drafting, Construction, and Scoring phases. Only the Construction phase is played in real-time. 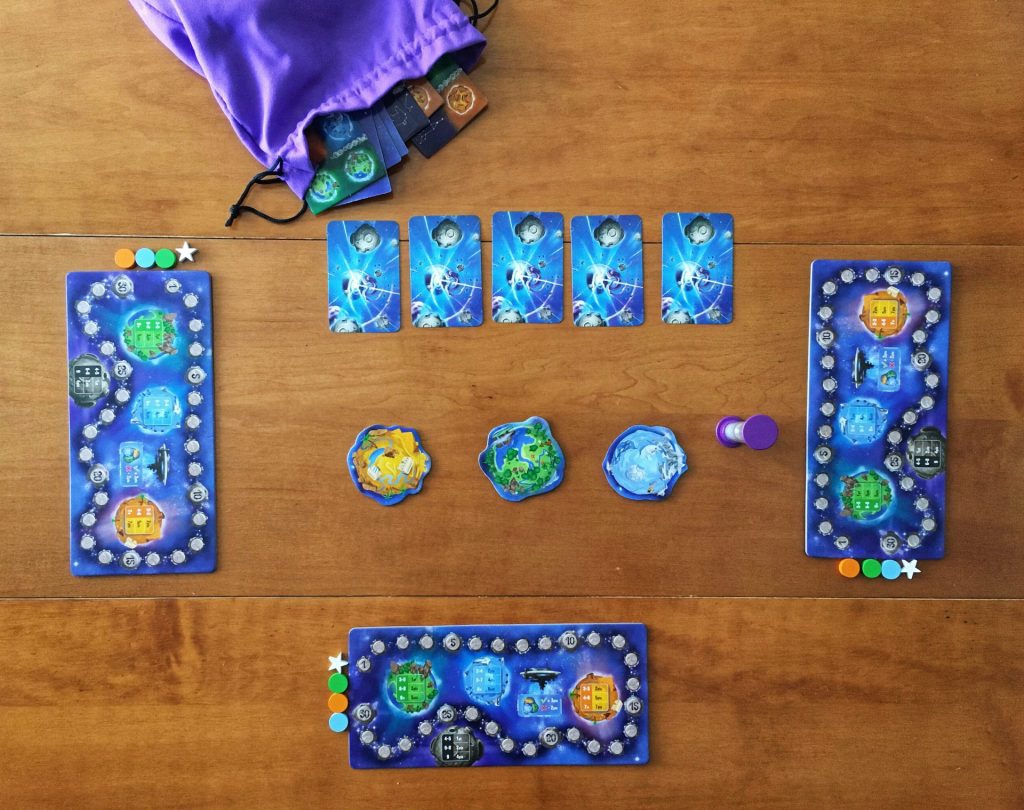 Before drafting begins, a new Kaos card is revealed and the previous round’s card is discarded. A Kaos card remains in effect for the entire round and might alter the round’s scoring, impose a constraint on players, or modify construction rules.

The Kaos cards are a nice touch in Cosmic Factory; they add variety to each round and keep the game feeling fresh and exciting, even after many plays. 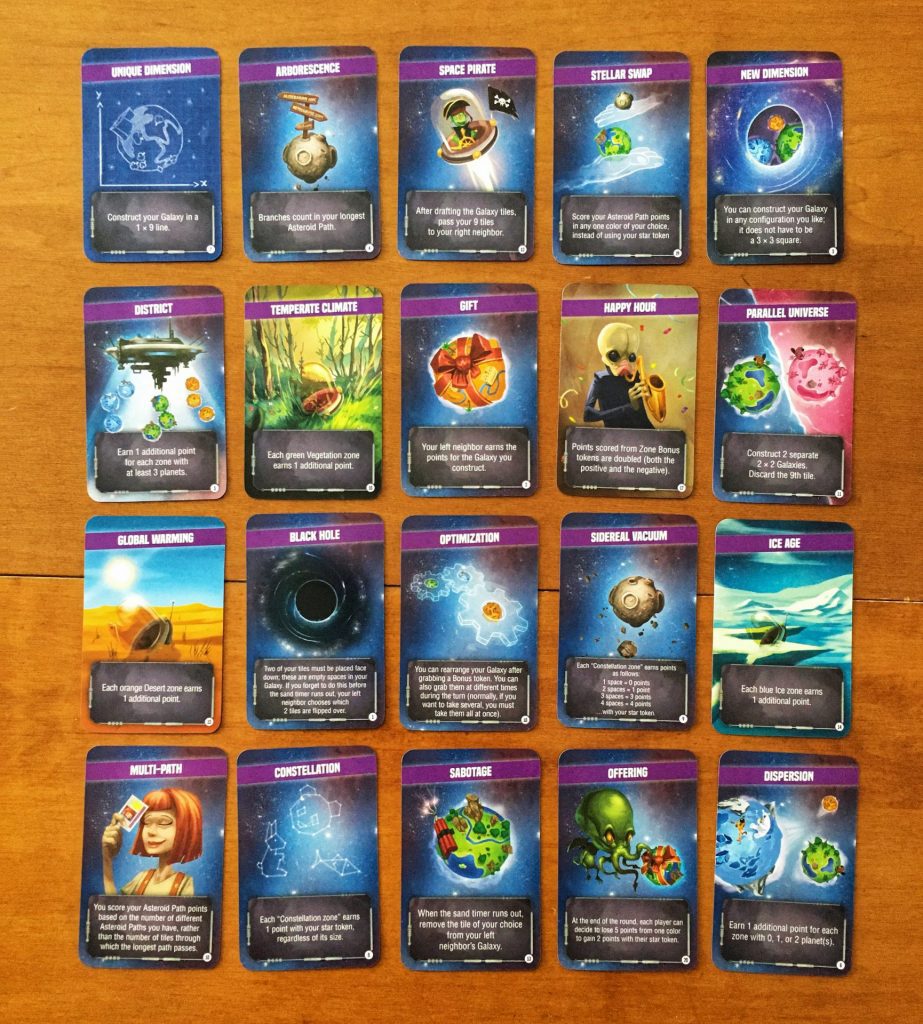 After the Kaos card is revealed and explained the drafting begins. Each player draws 9 tiles from the bag, chooses 3 to keep facedown, and passes the rest to the player on their right or left depending on the round. From their new hand of 6 tiles, players choose 3 to keep facedown and pass the remaining 3 to the next player. Players are never allowed to review tiles they already selected earlier in the phase nor are they allowed to look at the last 3 tiles they receive.

Cosmic Factory uses a pretty standard drafting mechanism so if you’ve never played a drafting game before then now you know how it works!

When all players have 9 tiles facedown in front of them and they’re ready for the real-time fun, the sand timer is flipped. Players reveal their 9 tiles and have one minute to organize them in the best 3×3 arrangement to maximize their points. Players are attempting to create colour zones with planets to score points in the next phase. A zone is a contiguous group of one colour, not separated by a constellation or an asteroid path. 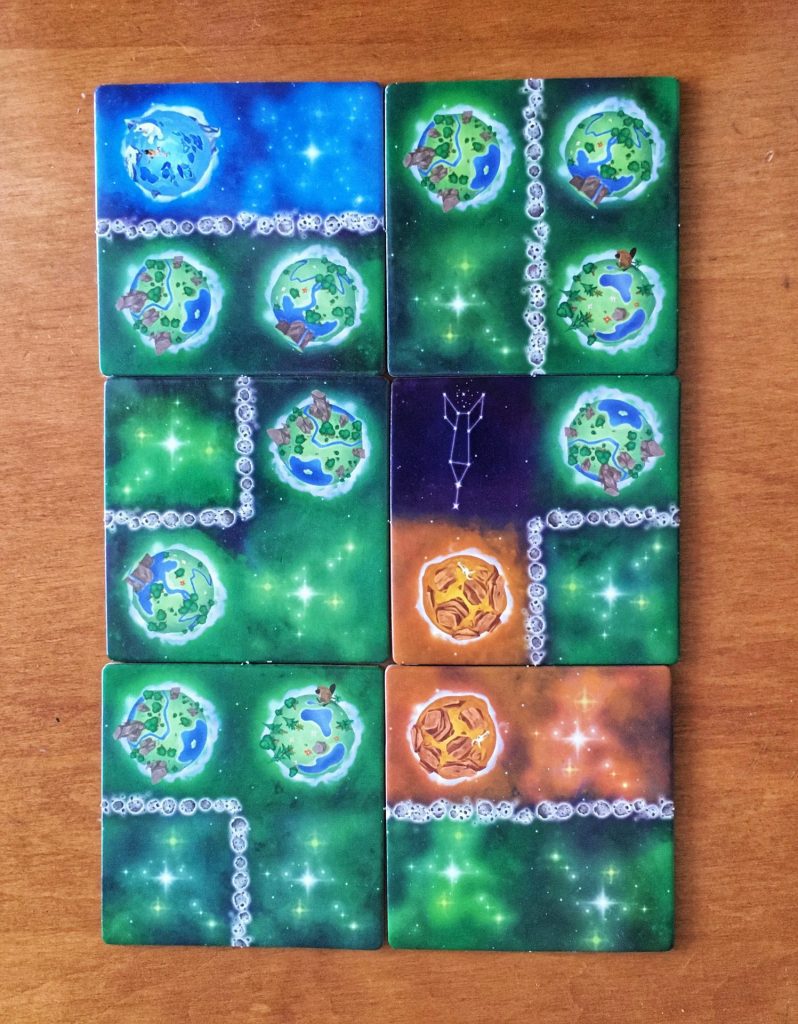 There are 3 colours in Cosmic Factory: green (Vegetation), blue (Ice), and orange (Desert). This player has created 1 blue zone, 1 orange zone, and 4 green zones. The green is not one contiguous group because it is separated by an asteroid path (gray line) and a constellation (purple square with stars).

During the Construction phase, if a player feels they have formed a colour zone with the most planets, they may take a Zone Bonus token. There is only 1 token for each of the 3 colours. A player may take more than 1, but they must take them at the same time. Once a player has taken a Zone Bonus token, they are no longer allowed to touch their tiles.

The Construction phase ends when the sand timer runs out. Any player who has not placed all their tiles shuffles the remaining ones without looking and adds them to their tile arrangement randomly, no longer allowed to make any adjustments.

Each colour zone with planets that a player has created might score them points, depending on how many planets are in the zone. The scoring requirements for each colour are listed on a player’s board. 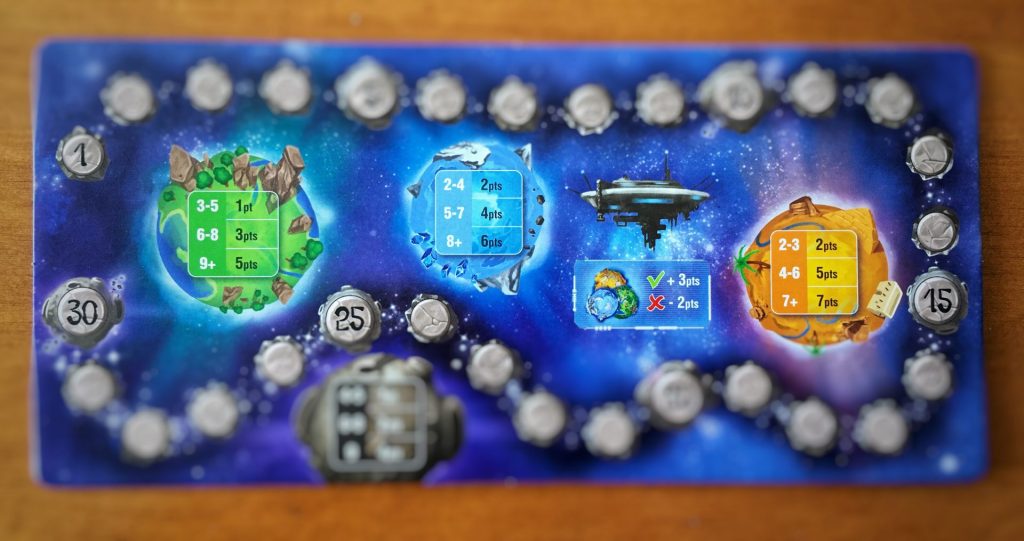 The green zones need more planets to score and they give fewer points compared to the blue and orange zones.

Players evaluate each colour zone on their board and move their matching colour token (green, orange or blue) accordingly if they score points. 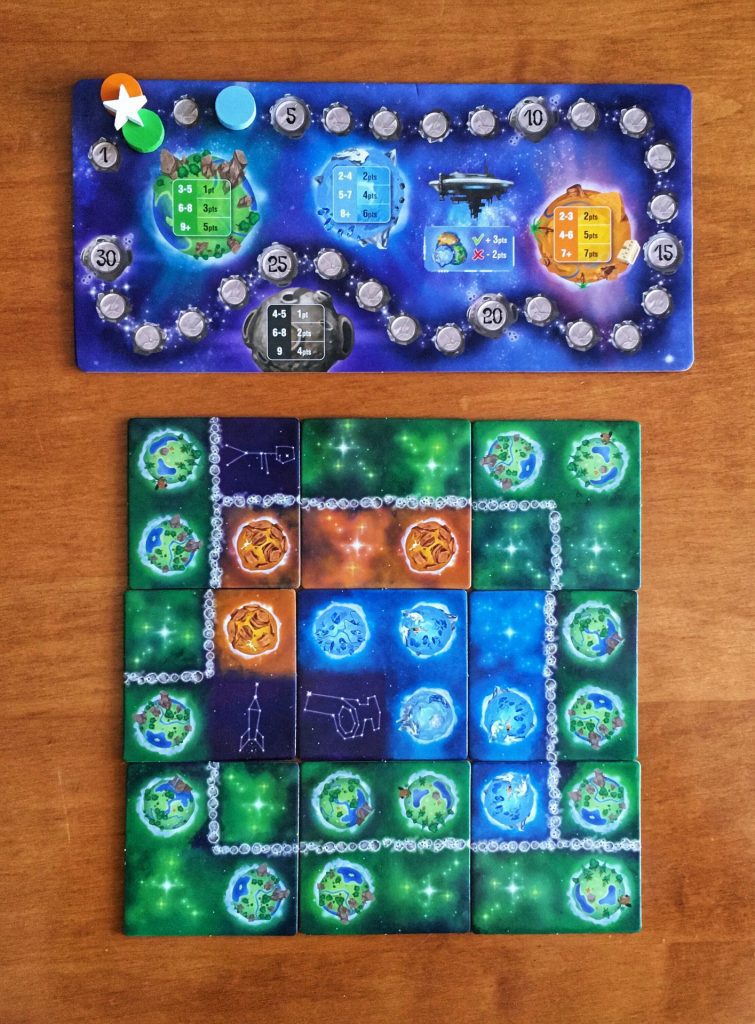 Next, each player determines their longest asteroid path and how many tiles it passes through, counting each segment and tile only once. Use your star marker to score a number of points according to the table on the player board (4-5/6-8/9 tiles earns 1/2/4 points).

Your asteroid path can never be more than 9 tiles. Sadly you score no points if your longest path passes through fewer than 4 tiles.

Then check the players with the Zone Bonus tokens. If their largest zone matching the Bonus token’s colour is more than (or tied with) other players’, they gain 3 points and mark this with their matching colour marker. If they have less than another player, they lose 2 points. Players who didn’t grab Bonus tokens don’t gain or lose points in this way.

Some Kaos cards might give players a few extra points, in which case these points are scored in this phase as well.

The game ends after the fifth round and players determine who has the highest score. Each player’s score is the sum of their lowest colour marker (green, orange, or blue) and their star marker.

This player’s final score is 20, 8 for their star marker plus 12 for their orange (their lowest colour).

As a real-time game and Kane Klenko enthusiast, I think Cosmic Factory is great. The tile drafting works very well, especially since you can’t review your tiles or look at the last three you’re given. This adds an element of surprise and a tension that the game might not otherwise have if each player had perfect information. Like many games that are primarily drafting, Cosmic Factory scales nicely for two players all the way up to six. Even if you aren’t a real-time fan, you might still enjoy Cosmic Factory because the game pits players in a race against the clock and not necessarily each other (such as in other real-time games like Nine Tiles Panic).

What would likely become a dull gameplay experience after a few plays (draft tiles, arrange them, score, repeat) is avoided thanks to the Kaos cards; the essence of Cosmic Factory is really all in these cards. Many of the cards might completely change the direction of your strategy. The Gift card, for example, will throw a wrench in your plan, asking you to flip the switch in your brain and alter your strategy by arranging your tiles to score very few points. You might try to take advantage of other cards like Unique Dimension because you could earn full points for your asteroid path if you draft carefully, but at the same time you probably won’t score many points for your zones. The Kaos cards make each round of Cosmic Factory engaging and keep the game’s mechanisms exciting.

Cosmic Factory is yet another win for Kane Klenko in my books, but check the game out for yourself if you don’t believe me.

Out of Blue (Original Motion Picture Soundtrack) by Clint Mansell

Songs to check out include: We Are All Stardust, Parallel Universe, and Astral Blues.

Songs to check out include: The Only Moment We Were Alone and Your Hand in Mine.
More info on Explosions In The Sky: http://www.explosionsinthesky.com