It’s mass hysteria as aliens descend upon Earth… and my stars, are they hungry! UFO’s hover overhead as the starving aliens (chased by Men in Black) shamble all over town, causing widespread panic among the citizens and their pets. What do these ravenous extraterrestrials want? Is the human race their primary source of nutrition? Nothing so sinister, as it turns out. These aliens come in peace but crave one of Earth’s most precious resources: our tasty hamburgers! 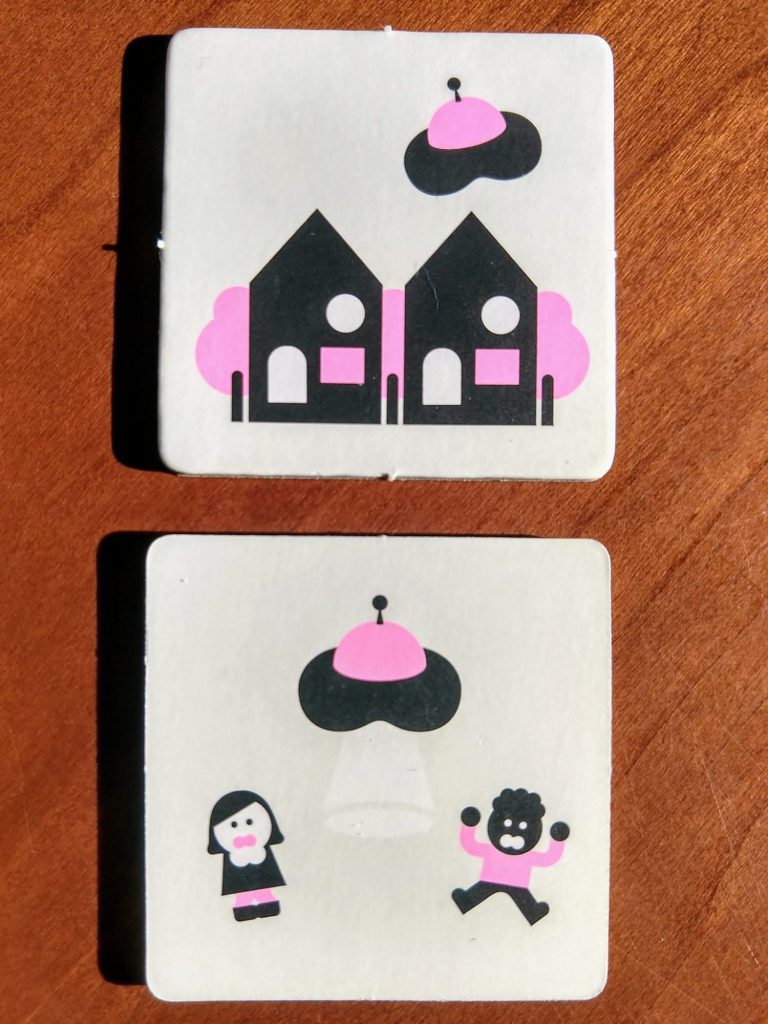 In each round of Nine Tiles Panic, 2-5 players puzzle over nine double-sided tiles, racing in real-time to build their town tableaus and juggle the humans, aliens, canines, and other board elements on them while targeting variable scoring conditions in order to gain the most points. 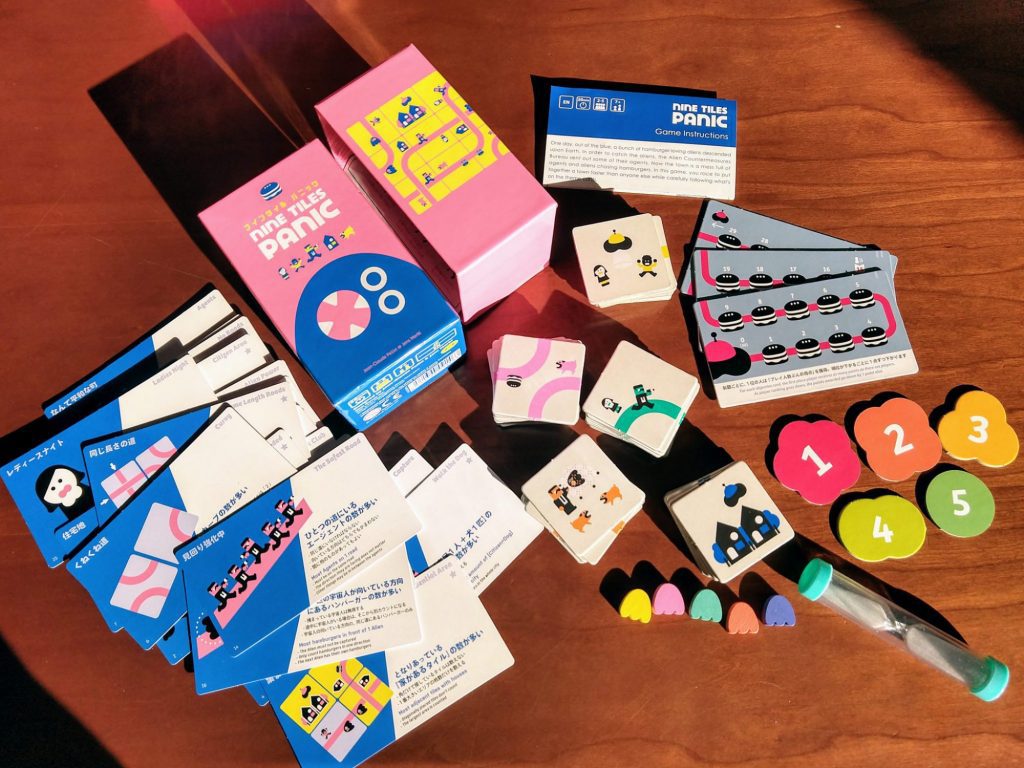 Players are given identical sets of nine bite-sized, double-sided tiles and a matching wooden alien scoring meeple . The three-part scoreboard is “assembled” sequentially, and all scoring meeples are placed at the bottom of this snaking score track. 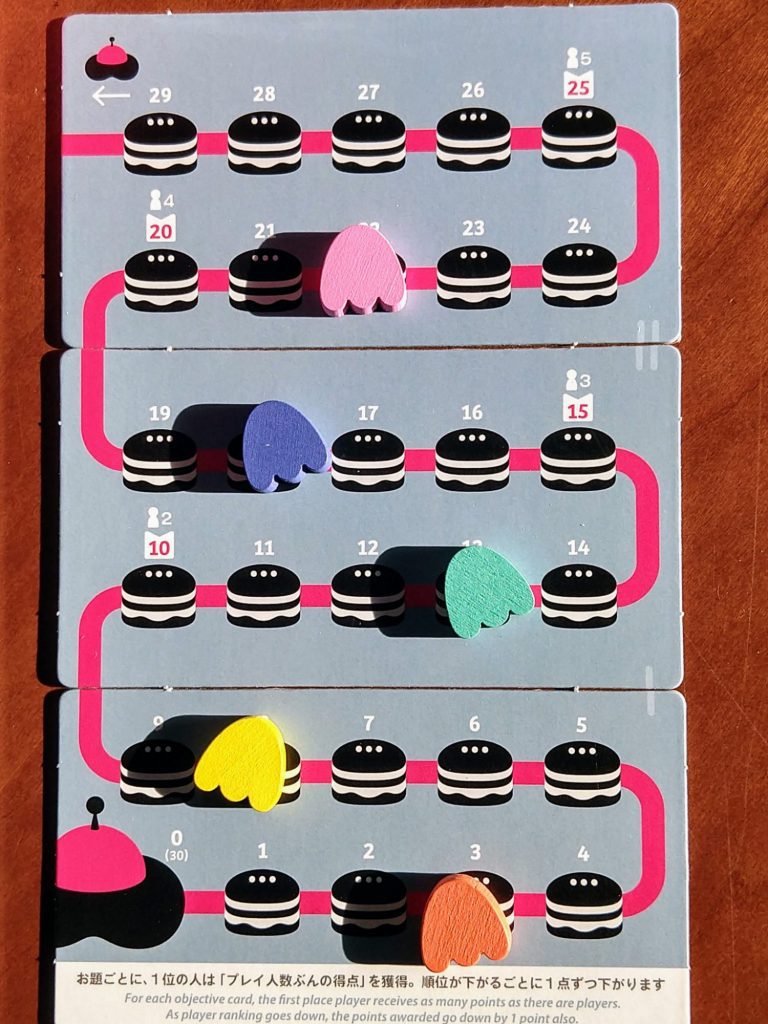 The player’s scoring meeples are reminiscent of Pac-man ghosts! 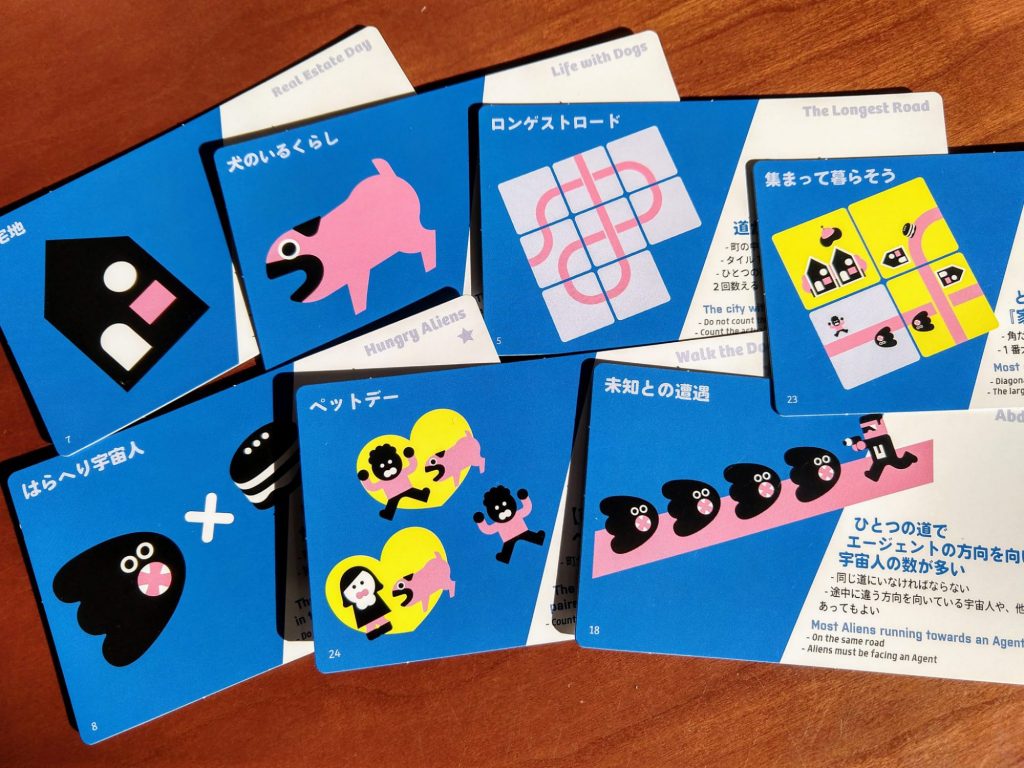 Aliens, Hamburgers, and Doggos. Oh My!

To start a game round, players take up their nine tiles and shuffle/flip them in their hands without looking at them. When everyone is ready someone should call “go” to signify the official start of the round.

Simultaneously each player builds a 3-by-3 square town grid with their nine tiles. [Note that the scoring cards call the players’ completed tile grids “Cities” while the rules set calls them “Towns” but that these terms are synonymous.] When town-building, players should strategize around the three scoring conditions drawn for the round. As players flip, swap, shuffle, and slide around their tiles they must follow the Three Rules when building their town grids:

Players that do not adhere to these immutable town-building rules are disqualified and not eligible to score for that particular round. 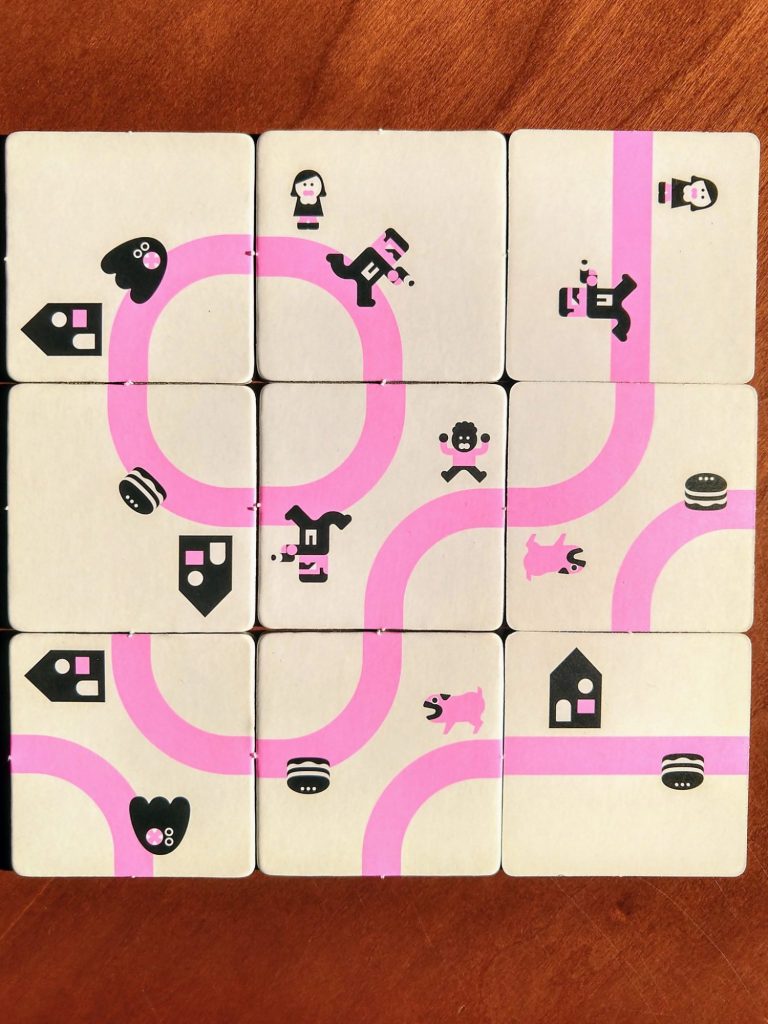 This town is ineligible for scoring due to the closed loop and the two dead-ended road sections.

While not automatic in every round, some scoring cards introduce the concept of Captured Aliens in your town configuration. Captured Aliens occur under the following circumstances:

Example of a Captured Alien

There is no set time limit during the town-building phase. But that doesn’t mean players can take their sweet time. The first player to complete a (legally scoring) town to their satisfaction grabs the lowest-value turn order chip (#1) and activates the sand timer. This triggers the most panicked portion of Nine Tiles Panic. All other players are now on the clock and only have the remaining sand in the timer to complete or perfect their town grids. Subsequent players that finish earlier than the sand timer’s last grains can grab the next lowest numbered chip from the center of the table in sequence (2, 3, 4, 5).

Once everyone has finished – either by choice or because the sand timer expired – all towns are examined to insure they are scoring-eligible per the Three Rules. Towns that are not “street legal” are disqualified and do not score for the round. 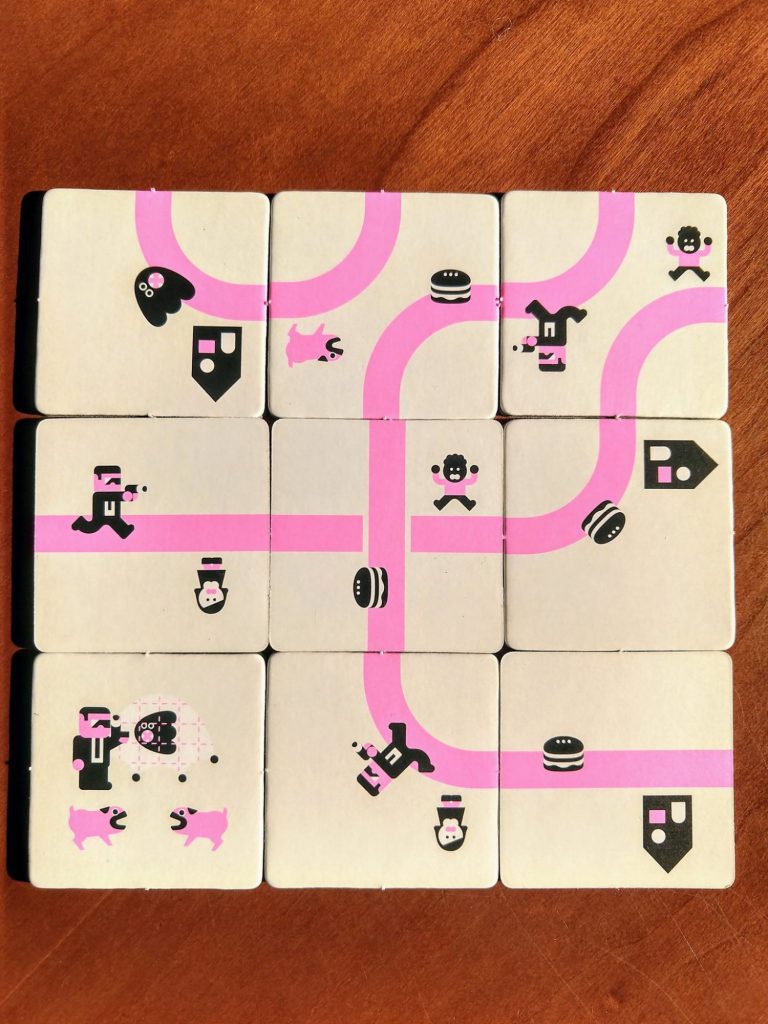 This town can be legally scored: 3×3 grid, all roads are connected, and all roads lead out of town.

All scoring-eligible towns are then evaluated for points based on the three face-up theme cards. Points will scale based upon player count (so in a four-player game the point spread is 4-3-2-1). The player with the highest subtotal for a theme card is awarded first place. The next highest scoring player receives 2nd place points, and so forth. Players must have at least one instance of a theme card’s scoring condition present in their town to be considered for any points in that category. This avoids players purposefully “punting” on any scoring conditions.

Player ties are broken in a theme scoring card by the Turn Order chips claimed during the build phase. The lowest value turn order chip (aka whomever finished building earliest) always breaks ties between players.

The game is played over multiple rounds in this fashion to the suggested target score based on player count; 2/3/4/5 players must earn 10/15/20/25 points. When the target score is reached by any player, the player with the highest overall score after the current round is completed wins the game.

The Truth Is Out There

Nine Tiles Panic is a joy to play. It distills familiar mechanics into their purest, most palatable forms. It retains the best bits of puzzlers, tile-layers, and real-time speeders with a dash of dexterity and interaction through the timer. 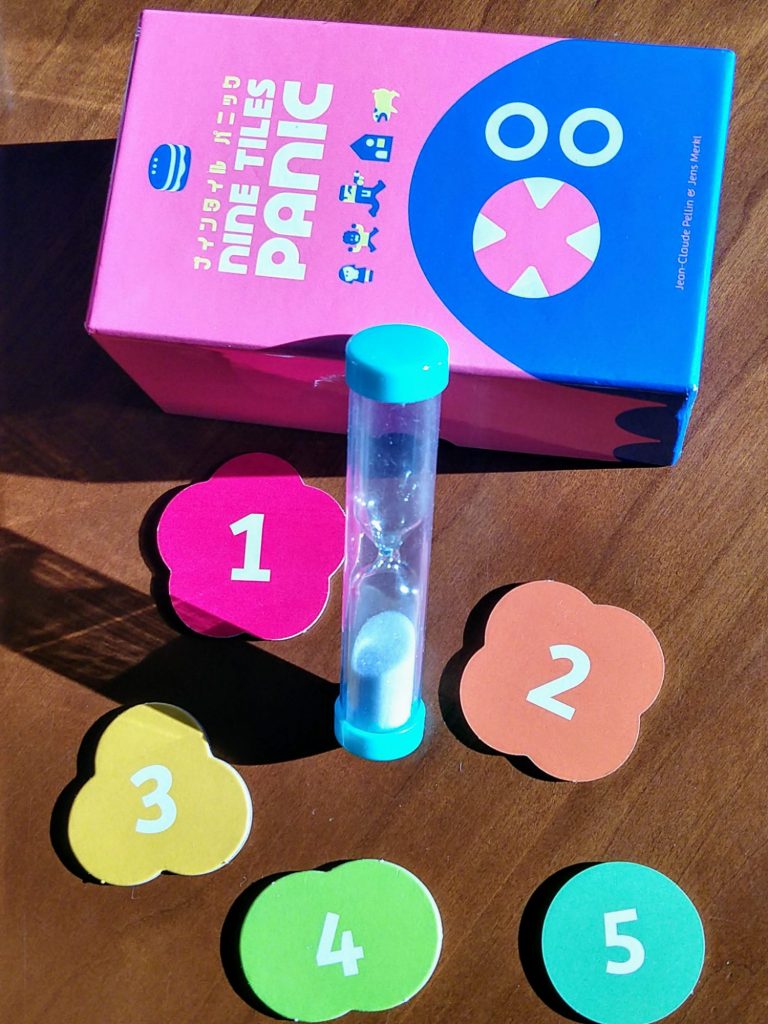 In addition, the hectic panic ingredients baked into Nine Tiles Panic won’t alienate most players – especially those who may shy away in general from similar games such as Ubongo or Galaxy Trucker. In our games we never felt frozen by the decision-making or stressed into inaction by the ticking clock.

Having 18 potential tiles (9 front and back) is just enough game state to cause the fog of war required for the game, but it’s not so much overload that one can’t achieve one’s tactical goals and feel like they are captain of the starship. Three scoring cards each round is perfect: enough data points to be mindful of during town-building, but not so many that one gets trapped in the cold vacuum of “do-nothing” space.

Despite being powered by a “real-time” engine, Nine Tiles Panic travels along a balanced and forgiving flight path. Since games take multiple rounds to finish and players are insured at least 1 point for having the bare minimum requirements of a completed town, even if someone suffers from space madness they won’t necessarily be nuked from orbit in the final standings. While being disqualified from a scoring round makes for difficult comebacks, players can still be competitive; in one of our games someone that was disqualified twice still managed to salvage a 2nd place finish.

The X-Files: File Under “Excellent”

Nine Tiles Panic is a supernova smash as cute as a bushel of Tribbles. Oink Games is known for games packaged as portably and colorfully as a box of Crayolas, and Nine Tiles Panic is no exception. In fact this could be considered their first “Big Box” game; it’s the first release that boasts supersized packaging: 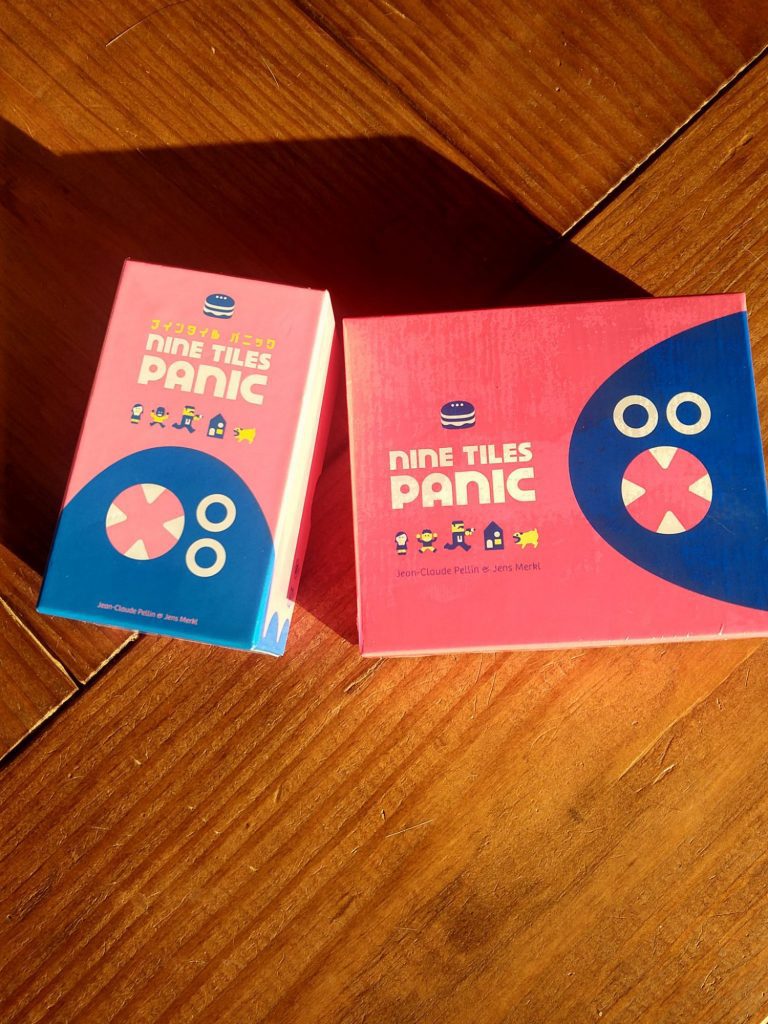 Oink Games is renowned for superlative production value and they outdo themselves here. The tiles are thick and sturdy and the eye-popping, future-cute kawaii-style is playful without sacrificing clarity. The scoring theme cards look like a flashy Vegas realtor’s business card, they are multilingual and not only state the scoring conditions but give bulletpoint clarifications and a relevant illustration on each card. It’s a master class in balancing form with function – another Oink Games trademark.

Nine Tiles Panic is one of this year’s best boardgame imports and is a strong challenger for a Diamond Climber Award. It’s an ideal filler game as swift and agile as Han Solo’s Kessel run, with gameplay as addictive as a drive-thru burger craving from your favorite fast food franchise. This micro, minimalist puzzle plays in 20 minutes flat, scales well for 2 through 5 players, and with 26 different scoring conditions brims with replayability. Nine Tiles Panic is one of the brightest stars in the Oink Games product line and has blasted into the stratosphere as an instant classic. 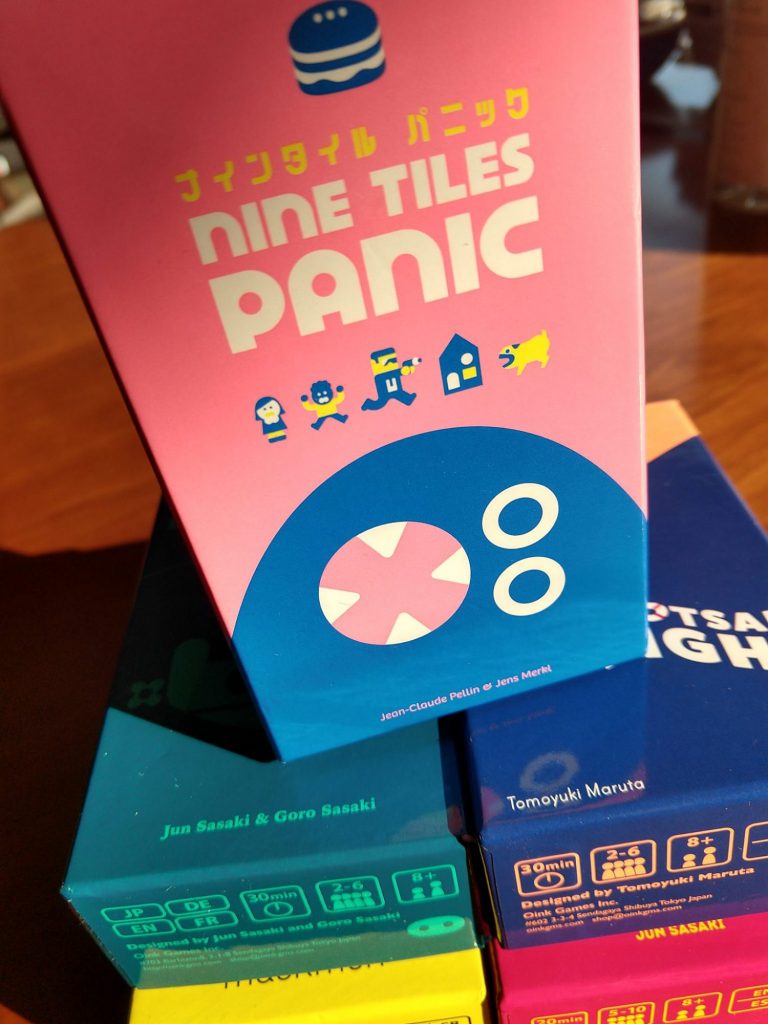