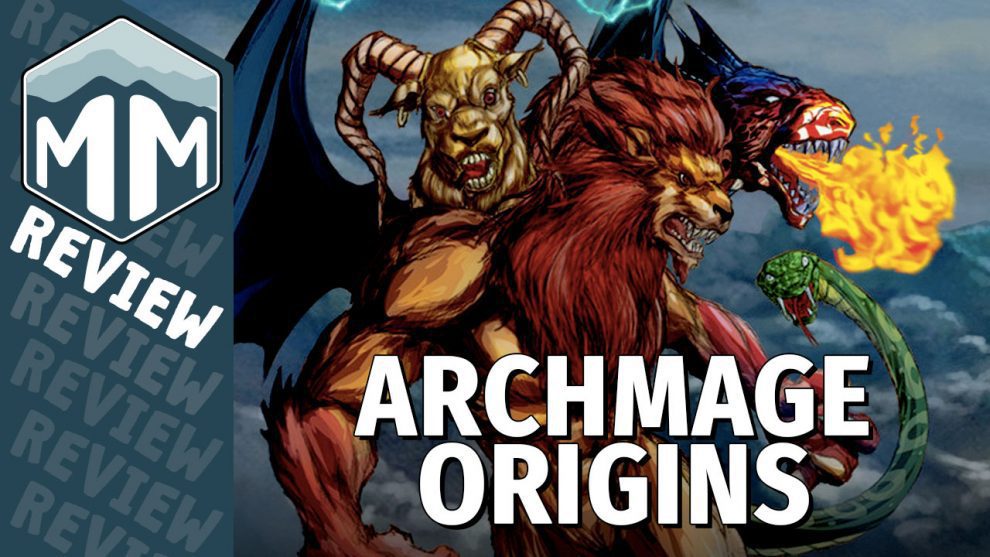 David McMillan @FeldFreak
The mages of Sorcado are in a constant struggle for power. Only by gathering the strongest creatures and minions can one of them hope to emerge as the most powerful mage in the realm. Can you become that mage? Read our review of Archmage Origins to find out more about this upcoming Kickstarter game!

Archmage Origins takes place in a realm called Sorcado and is the precursor to an upcoming game called Dawn of the Archmage which is scheduled to hit Kickstarter in August. In Archmage Origins, the players take on the roles of mages vying to recruit monsters and minions to build powerful armies with which to crush their foes. The game begins with a grid of facedown cards comprised of spells and monsters. Using the cards in their hands, the players will peek at these cards and maneuver them around to try and wrest control of the cards from their opponents. Each column and row can have cards played to it to increase the mage’s exertion over cards in that column or row. At the game’s end, whichever mage has exerted the most influence over each of the cards will collect the card. The mage with the highest total card value wins the game. 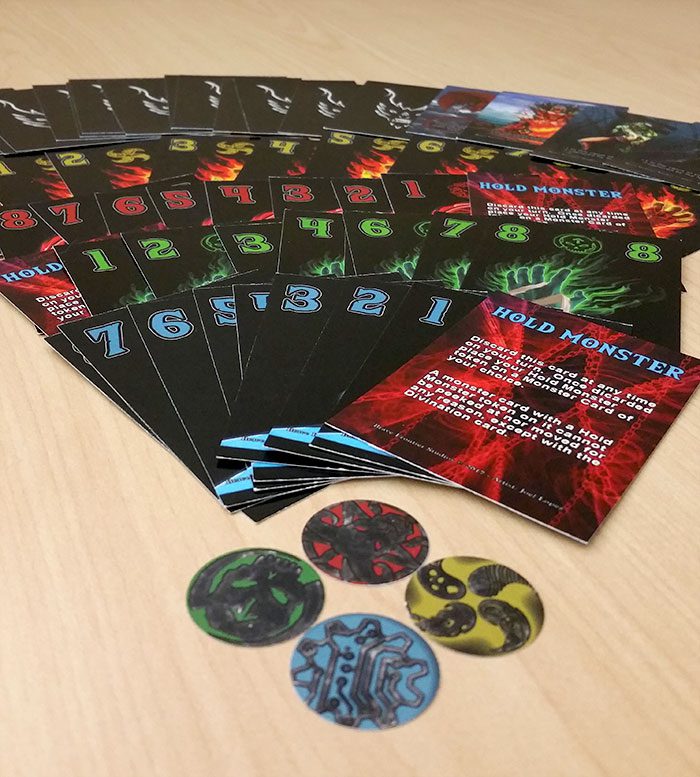 Archmage Origins is comprised of 56 cards and 4 Hold Monster tokens. The 56 cards are divided into four distinct types: 32 mage cards (numbered 1 to 8) in four different colors, 4 Hold Monster cards (one per color), 16 Monster cards, and 4 Spell cards. The rule sheet does not include any graphics, but was written well enough that I could sit down and comfortably play the game.

Since this is a preview/prototype, I cannot really comment on the quality of the various components. While some of the artwork on a few of the cards is incomplete, I can comment on the artwork that was presented to me and it looks pretty good. Each different mage type (Demonologist, Necromancer, Elementalist, and Technomancer) has its own unique card backing which helps to distinguish which type is which even though these were not explicitly covered in the rules. The images of the various monsters are well done. There’s an obvious anime influence there. The artists – Joel Lopez, Andora Cidonia, and Paulina Leyva – have done a fine job of bringing this game to life.

To begin the game, each player will select a mage type and take the appropriate deck of cards along with the Hold Monster token that goes along with that mage type. Then the monster and spell cards are shuffled together and placed face down. Now each of these cards is drawn and placed face down into a 4 by 4 grid. The remaining cards are set aside as an Exploration deck. 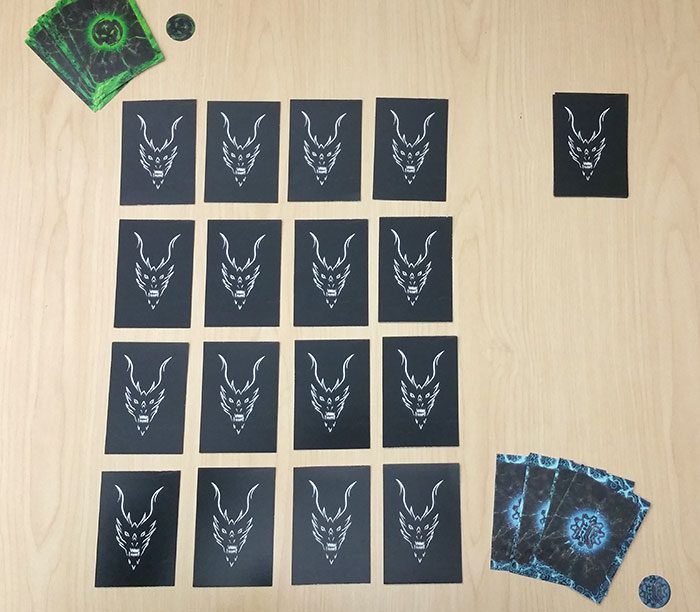 There are two ways that the players can lay out their cards in this game. Each mage can choose a corner and only place their cards along the edges that come together to form that corner or they can place their cards wherever they like so long as they never place more than one card next to any edge and there are never more than a total of 2 cards in any spot. The players will agree upon which layout they will be playing with. Then a starting player is chosen and you’re ready to begin.

As I mentioned previously, there are several distinct card types in this game that you should familiarize yourself with. The first are the Mage cards. These are the cards which the players will be using to bring their strength to bear on the various rows and columns of the board. With the exception of the number printed on the card, each card looks exactly the same. 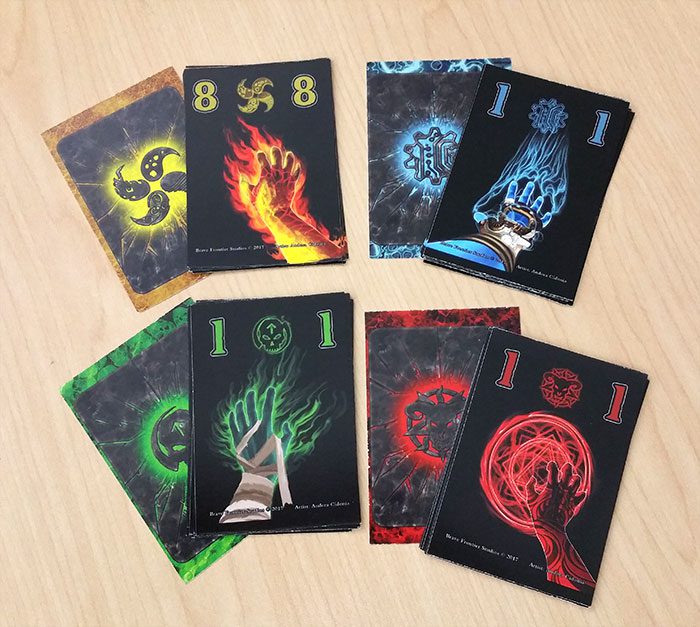 The second type of card is the Hold Monster card. This card also comes with a matching Hold Monster token. There is one per player. These cards are used during the game in order to prevent monsters from being moved or peeked at (more on these later). 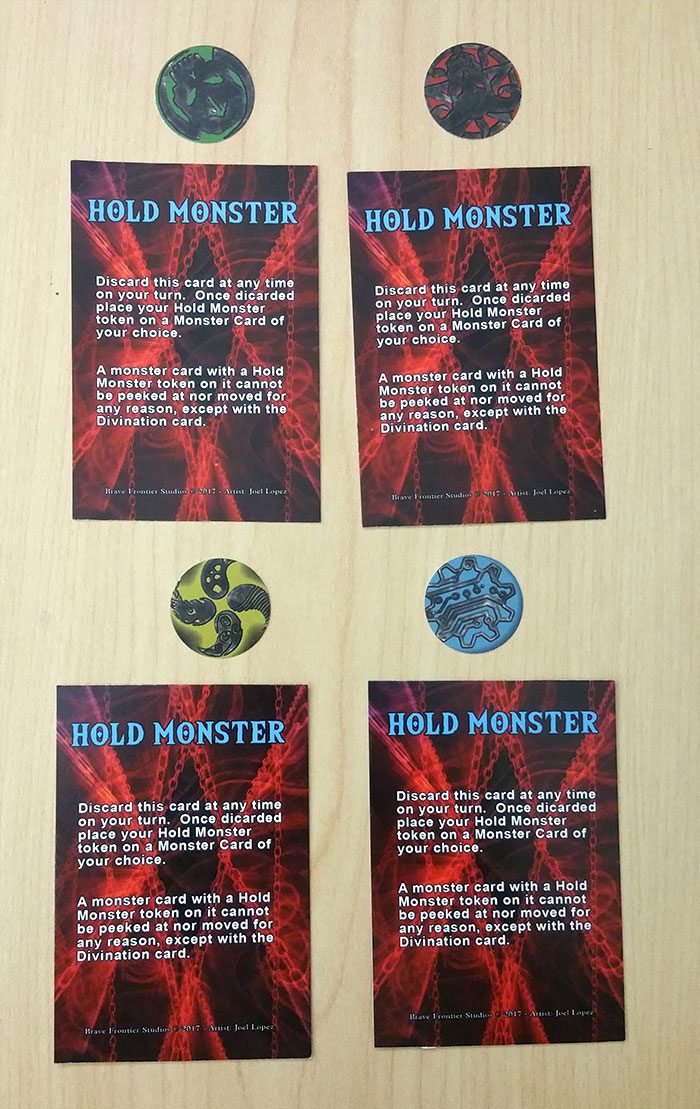 Next up are the Monster and Spell cards. Each monster card contains several pieces of information as well as an illustration of the monster in question. At the top right of the card is the monster’s power (how much it’s worth at the end of the game). At the bottom of the card is some flavor text or the monster’s ability (if it has one). The spell cards contain a background illustration as well as text that describes what the spell does. 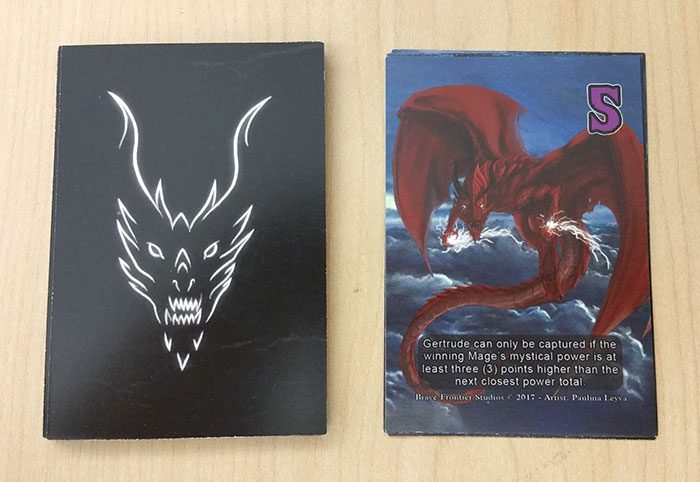 On a player’s turn, they will peek at two monster cards one at a time and then, if they choose, they can switch the places of these two cards. If the card is a Spell card, then the action of the card is carried out and that card is discarded. The only exception to this rule is the Divination card which has two abilities; one of which allows it to be replaced. Note also that any card which has a Hold Monster token placed atop it may NOT be peeked at unless a spell card says differently. 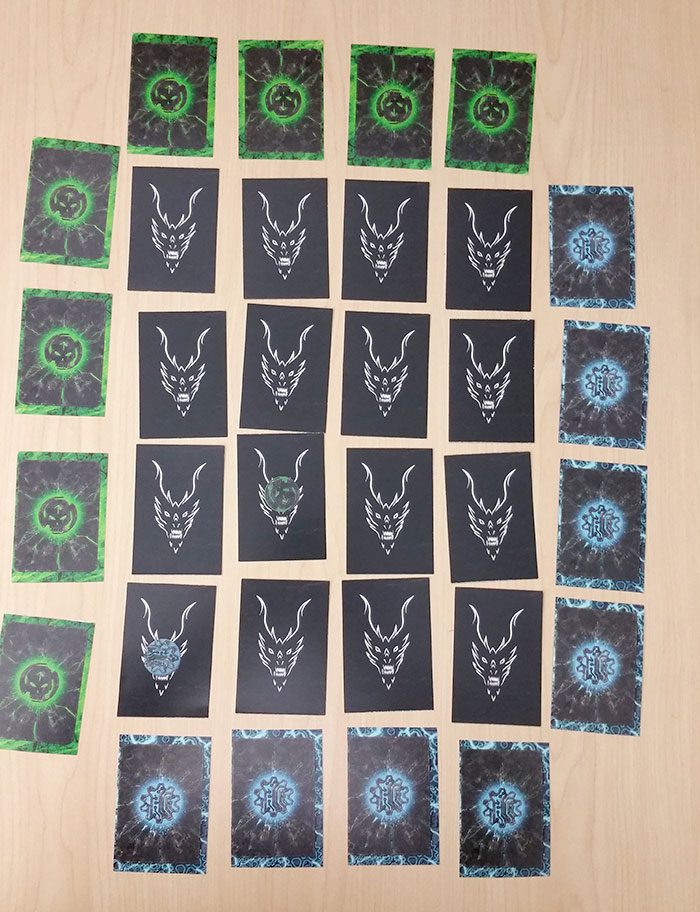 Once every player has placed all of their mage cards, the scoring begins. First, all of the card are flipped face up. Then, each monster is scored separately. Each player will add up the power of their mage cards in that column and row and the one that brought the most power to bear against the monster will collect that monster card. If there is a tie, then nobody receives the card and it is removed from the game.

After the players have captured their various cards, then they will add up the total captured card value to determine their end score. If any of these captured cards applies some kind of penalty to the payer based on their mage type, then this will be considered at this time as well. 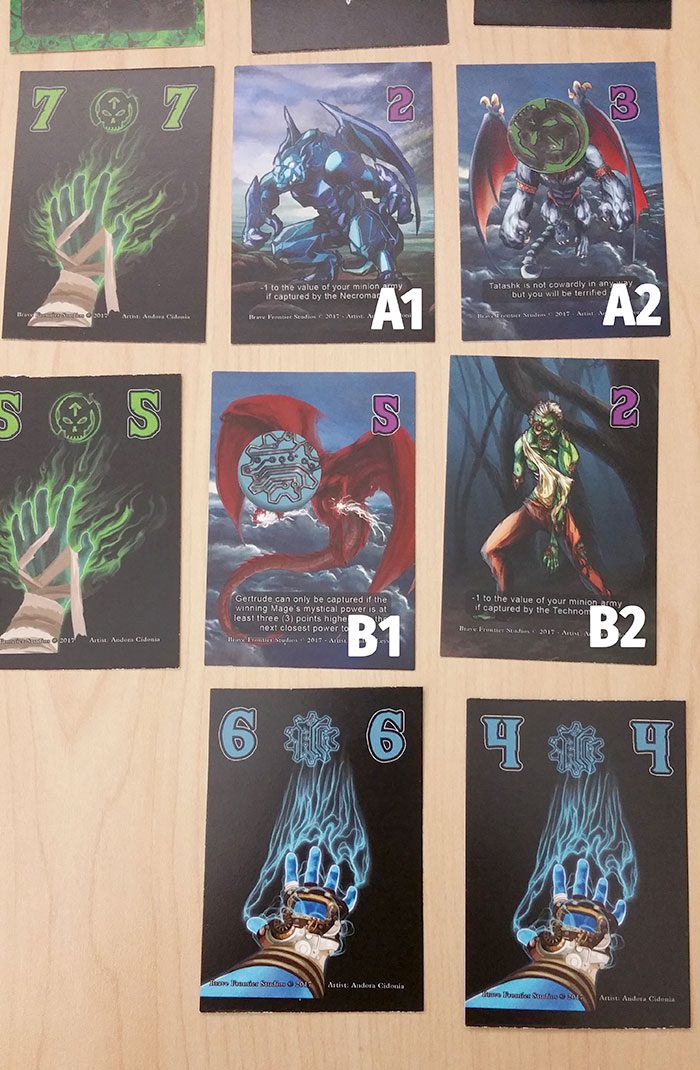 In the small example above, there are four monsters which I will refer to by their location in the grid. Let’s consider monster A1. In this example, green has brought 7 power to bear while blue has only brought a total of 6. The green player has won the card. However, since the green player is the Necromancer, they will suffer a -1 penalty to their captured card total. Some cards, like card B1 also require specific conditions to be met for the capture to be successful. It is also worth noting here that in the example above, we are only considering two of the cards that have been brought to bear on the various locations. There will also be cards along the borders at the top of the tableau as well as the far right of the tableau that would be considered for scoring purposes. However, since this is just an overview, I have left those out just to give you a general idea of how the scoring works.

Archmage Origins is a very light filler game that tests your memory and briefly touches your strategic center. The game is very simple and there aren’t a lot of opportunities to really form or execute any kind of cohesive plan. The reason for this is twofold: the game plays very, very quickly and the shifting nature of the cards will inevitably make some of your mage card placements virtually worthless. This is both a strength and a weakness. The speed of play ensures that the game never overstays its welcome but, at the same time, it plays so fast and has so much randomness that it’s really hard to feel like you’ve accomplished anything if you happen to win.

I had a couple of other issues with the game that don’t really affect the gameplay. As I mentioned earlier, the rule book doesn’t specifically state which color/symbol belongs to which mage type. If you’re familiar with fantasy and sci-fi tropes, they’re easy enough to figure out (the necromancer’s icon has a skull featured in it prominently, for instance) but I can see this being difficult to suss out for someone that might not be so inclined. I hope that this is addressed in the final rulebook. Another thing that bothers me (more of a missed opportunity than an error or an oversight) is that there are four distinct classes in the game, but there’s nothing distinctive about any of them. Aside from the player color and the symbol used to represent the different classes, they might as well all be the same. I wish that each class had a unique ability… something to set it apart from each of the others. It would certainly help the player feel more invested in the character. 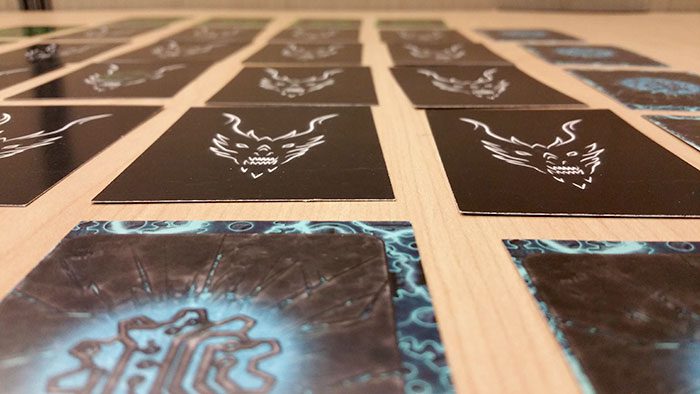 Archmage Origins does have some good things going for it, though. Firstly, it’s a prequel to an upcoming game and, from what I’ve read, physical components of this game will be able to be used in that game. The storyline from this game combines with the storyline of future games to create an overarching narrative and I think that’s pretty freaking cool. If you’ve ever played Assassin’s Creed, for instance, then you can appreciate the story that runs behind the scenes of every one of the games that ties them all together. Not many games out there (board games or video games) do this kind of thing and it’s something that I wish I saw more of.

Another good thing that Archmage Origins has going for it is that it’s very easy to set up and teach. There’s no lengthy rules explanation and no fiddly bits. From breaking the game out to setting it up to teaching, it takes just a couple of minutes. And, as I mentioned before, it’s fast enough that the players never get impatient for their next turn or start to get tired of the game halfway through.

So, all in all, Archmage Origins probably isn’t going to win the Spiel Des Jahres or any Game of the Year awards, but it’s enjoyable enough and fast enough and there’s just enough game there that, if you’re looking for something quick and easy to play between games, then Archmage Origins might fit the bill.

What do you think about Archmage Origins? Give us your opinions about what you like and/or dislike about the game in the comments below! 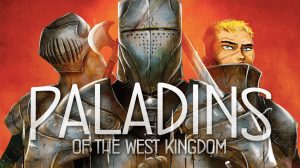 Paladins of the West Kingdom is one of Garphill Games’s finest, if not THE finest. Read our review to find out why David thinks so. 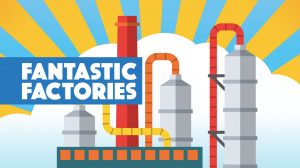 Mediocre manufacturing got you down? Industry grown uninteresting? Read our review of Fantastic Factories to find out how YOU can assemble some fun! 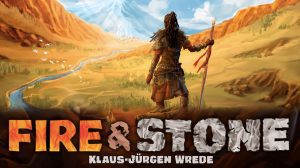 Welcome to the Stone Age! Check out our review of Fire & Stone for some tips and tricks on how to survive. Good luck!