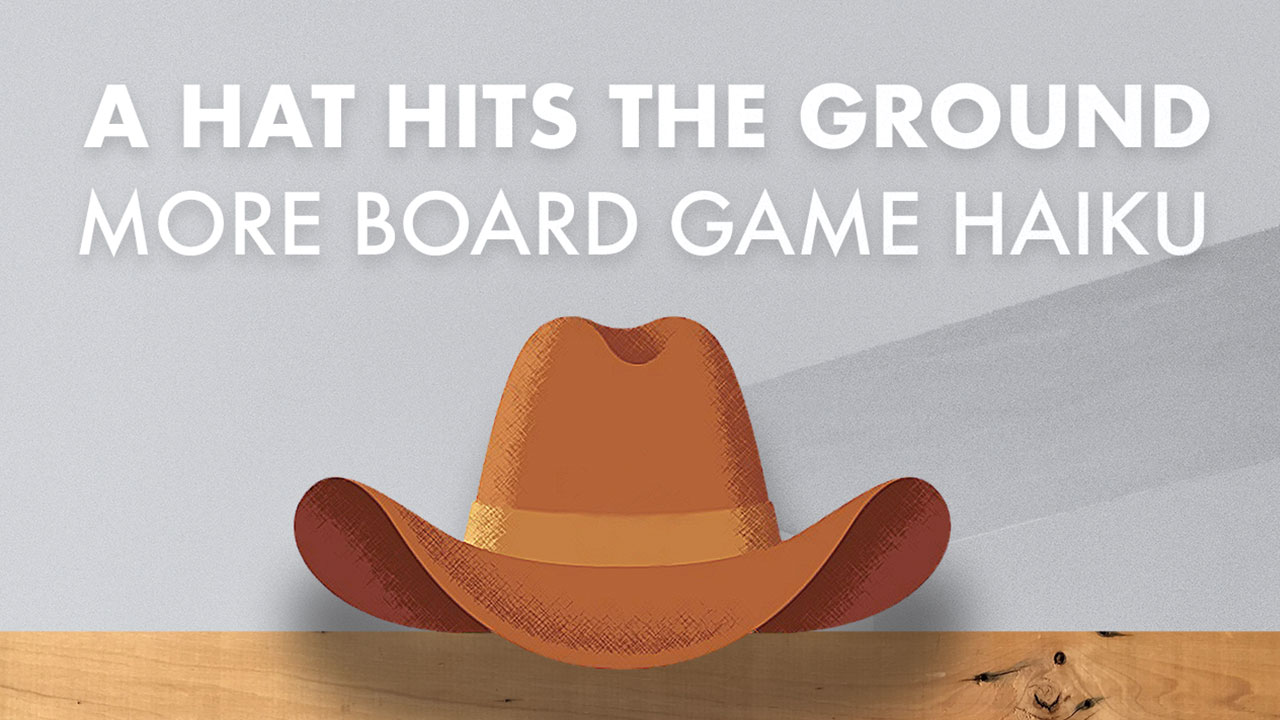 “Haiku, n. – A form of Japanese verse, developed in the mid-16th century, usually consisting of 17 syllables and originally of jesting character.”

I feel like the Oxford English Dictionary needs to update its definition of board games. Their definition of haiku isn’t too bad though – in the English language, haiku are typically seventeen syllable poems, split over 3 lines as 5-7-5 syllables, and featuring a seasonal reference and a juxtaposition of images or ideas.

In the previous collection I explained why I wanted to write haiku about board games (combining my love of tabletop games and science haiku) and how viewing something you enjoy through a different lens can be an interesting, amusing and thought-provoking experience. But this is the first big expansion so we’ll do away with any further repetition and just get on with the poetry.

Join me as we explore another 12 board games through the medium of haiku, starting with an excellent Spiel des Jahres winner from 2017…

The floor – so much waste

Not a Gatekeeper of Gozer but a rather lovely abstract board game all about decorating Portugal’s Royal Palace of Evora with beautiful ceramic tiles. Azul challenges players to collect and place tiles in a pre-set five by five grid, scoring points not so much for where tiles are placed but when they are placed. As punishing as it is pretty, Azul’s floor line is where the game can get really mean, docking players points for broken tiles. Check out our review of Azul.

but you can’t escape your roots.

The ledger calls you.

I challenge you to find a more thematic eurogame featuring blandly coloured cubes than Village. Players represent multiple generations of families in a small village, the individual family members living, working and, indeed, dying over the course of the game. And if a family member dies having achieved some good then they’ll earn a place in the village chronicle and score lots of points at the end of the game… if there’s space left in the chronicle that is. The race to kill your family is on! Check out our review of Village.

Ground-breaking on its release back in 1973, Hare & Tortoise won the very first Spiel des Jahres prize with its knotty two-steps-forwards-one-step-back race. It’s a game all about carrot-management: you need carrots to go forwards, you get most of your carrots by going backwards, and you can’t finish with too many carrots. It’s an ingenious piece of game design – check out our review of Hare & Tortoise.

The final line of this poem was specifically written for my sister-in-law who had a particularly bruising encounter with too many carrots at the end of a game of Hare & Tortoise.

What a lot of rooms!

The middle child in Uwe Rosenberg’s harvest trilogy, Caverna: The Cave Farmers isn’t as harsh and restrictive as Agricola or as open as A Feast for Odin. Yet Caverna’s mix of farming and mining along with that vast selection of rooms available to be built remains as enjoyably addictive today as when it was released in 2013.

If you’re going to abuse an ancient Japanese art form for entertainment then the least you can do is write a haiku about a board game set in Japan, right?

Confusingly, Takenoko is a game all about a panda, traditionally Chinese creatures. This one was a gift to the Japanese emperor and players represent members of the Japanese Imperial court tasked with caring for the panda. This largely involves getting a gardener to do the hard work of growing bamboo — not that bamboo needs any encouragement in my experience. But given the cute, colourful components, we aren’t going to look too hard at how the theme and mechanics interact. It’s hard to underestimate the impact that some gorgeous hexagonal tiles, stackable bamboo and a small plastic panda had on the tabletop scene when Takenoko was released in 2011.

Thank you to my wife Lisa for writing this haiku out for the photo – my handwriting looks like a panda sat on some bamboo.

Escape: The Curse of the Temple

The Gong! My rescuer flees,

A real-time masterpiece, Escape: The Curse of the Temple has players accessing their inner Indiana Jones, frantically trying to find treasures and then escape from a collapsing temple, all while rolling dice as quickly as they can. Be careful though, roll too many cursed masks and you’ll end up stuck, unable to do anything until one of your teammates helps you out. I challenge you to play a game of this and not laugh.

The only city building game you’ll ever need and quite possibly the perfect board game (this may be a personal opinion), Suburbia is a fiendishly clever and highly thematic tile-laying game from designer Ted Alspach. Players compete to build the most populous suburb by balancing their income and reputation, all whilst wrestling with a population (score) track dotted with red lines that, for perfectly thematic reasons, punish you for doing well. Check out my Collected Thoughts on Suburbia, its expansions, app and sequels.

move, shoot, can’t get to cover.

A hat hits the ground.

The game that lets you enact scenes from your favourite western films on your tabletop! Flick ‘em Up! is a simple game of flicking discs to represent movement, bullets, dynamite and a whole wagon load of other western paraphernalia. The simplicity of the rules allow for a very silly game where the sheriff’s team goes up against the bandits in a fight to the end. And whilst the wooden meeple’s hats are used to indicate turn order, there’s something both joyous and poignant about how they can go tumbling after a particularly hard shot knocks a meeple over.

The second ever deck-building game, 2009’s Arctic Scavengers took Dominion’s now classic deck-building formula and twisted it to create a game as cool and pointedly aggressive as an icicle to the heart. After a period out of production, 2015’s reboot combined the base game with the HQ and Recon expansions, enabling players to take on the roles of post-apocalyptic badasses fighting it out in a frozen wasteland once more.

The twists and bumps of life’s path.

Gamble at the end.

The Game of Life has seen a fair few versions over the years, starting with ‘The Checkered Game of Life’ created by board game pioneer Milton Bradley in 1860. The modern version of the game came one hundred years later and is possibly best known for its pink and blue pegs that represent the players, their partners and children during the game (and inspired the name of the popular board game podcast Blue Peg, Pink Peg).

Arkham Horror (the board game)

I need my pistol.

Recently updated and released in its third edition, the Arkham Horror board game was originally published way back in 1987 and required players to work together to defeat monsters and close the portals to other dimensions that open up around the town of Arkham.

This poem is part of a sequence using very similar language to explore the Cthulhu theme in modern board games (check out the AuZtralia haiku in the previous collection). I’m interested in the small, mundane ways that characters within Cthulhu games sometimes take down their inter-dimensional adversaries, for example the investigator armed with little more than a pistol somehow defeating an Ancient One.

Forget 7 Wonders, Sushi Go!’s utterly adorable artwork and moreish gameplay make it the ultimate card drafting game and the epitome of light, fun gaming. Given all this it’s no wonder that Sushi Go! forms the first rung on our Card Drafting Stepladder. Plus, if you’re hungry for more, then its younger sibling Sushi Go Party! can cater to all your needs, presenting an entire menu of courses to add to your meal. Check out our Interview with designer Phil Walker Harding.

If you enjoyed these board game haiku then feel free to check out the previous collection: Board Game Haiku: Tabletop Games in Seventeen Syllables.

Rolling and Writing: The Definitive Guide to Storytelling Dice