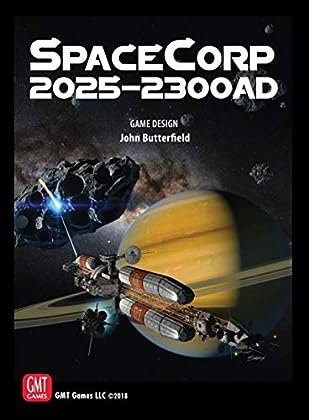 SpaceCorp: 2025-2300 AD is a fast-playing board game in which one to four players explore and develop outer space over three eras. Each player controls an Earth-based enterprise seeking profit by driving the expansion of humanity into the Solar System and beyond. In SpaceCorp you can …


Assemble a spaceport at a Lagrange Point.
Launch an exploration mission to Mars.
Mine the asteroids.
Earn profit from exotic resources discovered on the Jovian moons.
Discover microbial life in the subsurface oceans of Charon.
Decode exo-DNA to develop radiation resistant human pioneers.
Undertake a mission to Alpha Centauri in a generation ship.
Break through technological barriers to achieve faster-than-light travel.
Establish a colony in the Tau Ceti star system.


Each of the three eras is played on a different board:


The first era, Mariners, covers exploration and development out to Mars.
In Planeteers, players settle the outer solar system.
In Starfarers, players send missions to nearby star systems and establish interstellar colonies.


The game is based on Ejner Fulsang's SpaceCorp book, the first of the Galactican Series.