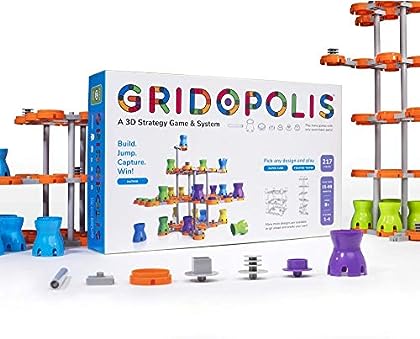 Gridopolis Games was founded to break the mold of traditional flat ‘bored’ games and challenge you to think creatively in 3D. This original way of thinking makes Gridopolis not just a fun strategy game, but also a compelling tool for STEM & learning.

Gridopolis is a three-dimensional strategy game. If you have ever played checkers or chess, you get the idea. Only now, we are playing in 3D. This means you can move and jump and play in any direction! You can move horizontally, vertically, and diagonally – plus across multiple levels. Using an innovative (yet amazingly simple) structural system, game play happens in a three-dimensional space called a grid-set. And, unlike other games, the grid-set is dynamic and changes during play.

The Gridopolis game — and system — is also flexible, modular and expandable. Grid-sets can be re-configured at any time to expand the game, change the rules, or even invent your own brand new game from scratch. The only limit is your imagination!

The goal of Gridopolis is to capture your opponents until you are the last one left or time runs out. You capture others by jumping over them.
Any marker that gets jumped is captured and comes out of the game. Use a multi-jump to capture more than one opponent on a single turn!

MOVING
Starting markers are called pawns. These can only move one pad at a time and never go backwards.
A pawn becomes a king when it reaches the opponent's home-row, marked by a kingerizer. Flip your pawn and you are now a king. A king gets to move two pads at a time AND can move in any direction. Wow.

JUMPING in 3D
Any jump-capture move must follow the ‘straight-line’ rule. Think of three points (or pads) in a row: your starting point, the opponent you are jumping over, and your landing point.

Hyper-pad : these pads are like teleporters. Land on one to get ‘beamed’ to any other hyper-pad on the grid-set. The ride is all part of the same move.
Kamikaze : play outside the grid-set! If you have nowhere to land when jumping, you can still capture an opponent with this sacrifice move. Both markers must be on the same level and both are removed.


BUILD (or SHRINK!) the GRID-SET
At the beginning of a game, each player gets ten extra grid-set parts. At any time, you can change the grid-set in the following two ways. (NOTE : This counts as your turn.)

Add-a-pad : grow the grid-set at any time! Connect one of your extra pads to expand the grid-set horizontally or vertically.
Blocker-box : shrink the grid-set! Use this part to block a pad, taking it out of order for the rest of the game.


SO MUCH MORE!
This is just the first game in the Gridopolis Game System. You can also change the layout of the grid-set, tweak the rules, add new parts, and even create your own original game from scratch. Double wow.