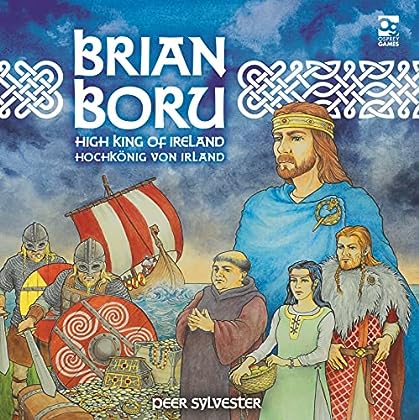 In Brian Boru: High King of Ireland, you strive to unite Ireland under your domain, securing control through might, cunning, and matrimony. Join forces to fend off Viking invaders, build monasteries to extend your influence, and gather support in towns and villages throughout the land. To become High King of all Ireland, you need to navigate a web of shifting alliances, outmaneuver your enemies, and grab history by the reins.

The success of the historical Brian Boru rested on three pillars: his victories against the Vikings, the favor he managed to garner with the Church, and the alliances he forged through political marriages. This became the foundation of the game, with each pillar becoming a suit in the trick-taking that forms the core of the mechanisms. Win a trick and you gain influence in a town, which, in turn, gains you majorities in the regions; if you lose the trick, however (deliberately or otherwise), you instead take an action corresponding to the suit of the card.