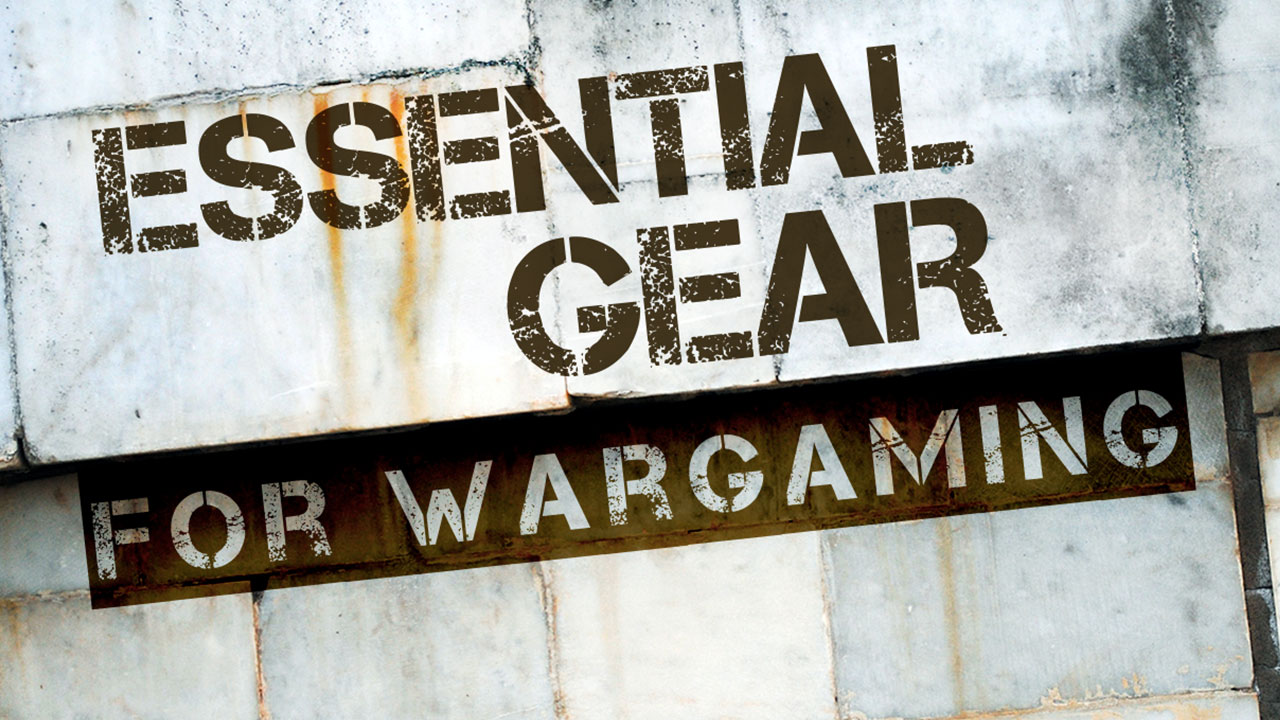 Whether you're a seasoned wargaming veteran, or just getting started, here's a list of essential wargaming gear to make your experience more enjoyable.

Wargames have some similarities to other types of board games. But they also have some key differences. After you’ve begun playing for a while, you will undoubtedly wish you had invested in some equipment to supplement and enhance your wargaming experience. Here’s a list of essential items all wargamers ought to consider.

You’ll need a room large enough to accommodate your gaming table, chairs, and whatever other furniture you may need. If you have children or pets, I suggest using a room in your home that has no other purpose other than to play games. Why? Because some wargames may take days or perhaps even weeks to complete depending on the game and the time you and your friends have available to play. Nothing is worse than to have your cat jump onto your table and scatter all your pieces. Or as once happened to me, having your dog eat your pieces! You also want your room to have a door that you can keep closed or locked when you’re not playing, especially if you have small children lurking about.

There are several different furniture items every wargamer will likely need to invest in sooner or later.

Most board games do not require a lot of real estate to play. The boards themselves are relatively compact, and the components needed to play are either on the board or can be stored off-board without taking up too much space. While that is also true of some wargames, many require much more space.

Wargame maps come either mounted (such as that you get with Monopoly or Terraforming Mars) or as map sheets. The standard map size is 34 x 22 inches (the equivalent of eight 8½ x 11 sheets of papers) and games may come with multiple such maps. In addition to the maps, many games come with player aids containing charts, tables, and other reference material players will use often. Add in the rulebook, a scenario book, and all the playing pieces and other counters that don’t start the game on the board, and you’ll need something larger than a standard 3×3 foot card table.

My gaming table is made up of a desk and matching credenza that are pushed together, back-to-back, which gives me a 6 x 4 foot playing surface. Even this is not enough space for some of my larger games so I drag out a folding card table to give me additional space. You can purchase custom-made gaming tables, but they can be quite expensive. A cheaper option would be to buy something from a furniture store, like a large dining table. An even more inexpensive option is folding banquet tables. They’re easy to store when not in use and can be easily reconfigured to match the needs of the game you’re playing. Just be sure that whatever route you take the furniture is sturdy and will comfortably fit in your game room.

If you intend on building a collection of wargames, you’ll eventually need some way to store them. I prefer these Kallax bookcases from Ikea, but almost any similar type of bookcase or shelving will suffice. Just be sure the shelves are high enough to accommodate your game boxes if you plan to stand them up, and deep enough so there’s no chance of them falling out.

Since most wargames are 2-player, you’ll need at least two chairs. Or if you’re only going to play solo, one chair will do. Regardless, they need to be comfortable because you’ll be spending a lot of time in them, so don’t go cheap on this item. I also suggest you get chairs on wheels or casters so they can be moved easily around the game table as needed during game play. Office supply stores usually have a large selection of chairs to choose from.

Whether you’re playing wargames with miniatures, blocks, or cardboard counters, you will likely need some means for storing them when they are not being used during gameplay. Many publishers provide small ziplock bags with their games. This allows you to sort the pieces by nationality or other means, put them in separate bags, and put the bags in the game box. I also prefer to store any cards that come with a game in ziplock bags too rather than use rubber bands. That’s because rubber tends to degrade and become brittle over time. This either causes them to break, or worse yet, become hard and stick to your cards.

As an alternative, many wargamers use counter trays that have separate compartments with lids that allow them to sort and store all the counters or wooden blocks. Many counter trays are even made to fit directly into the game box. You’ll need something larger to store miniatures. I also use hardware storage cabinets to store pieces for the game I’m currently playing. These generally take up less tabletop space than flat counter trays.

Whether the game comes with mounted map boards or map sheets, you may want to invest in some plexiglass to put over the maps. They serve several purposes. First, they make it more difficult to accidentally jar map sheets and disrupt the playing pieces. They also help the map board or sheet to lay flat and prevent your maps from being damaged by spills.

You can purchase sheets of plexiglass from most home improvement stores. Lowes and Home Depot will even cut them to the sizes you need. I had mine cut to 36 x 24 inches, slightly larger than the standard map size. They come in different thicknesses. A thinner sheet weighs less and causes less optical distortion, while thicker sheets are better at weighing down the map boards/sheets and keeping them flat. Some plexiglass is even glare resistant.

Okay, this is where I let you in on a little secret. Many wargamers are a bit obsessive. Unless the cardboard counters come in laser cut frames, your counters will likely have little nubs on them after they’re removed from the frames, typically on the corners. These tend to fray over time and just look bad. The nubs also make it harder for counters to fit nicely within each hex. So, we obsessive gamers trim the counters. Yes, it’s tedious, but oddly soothing.

A trimmer with a 2 to 2.5mm curve will work for most games. Oregon Laminations makes a couple of popular models. Their “Deluxe” model works well; however, be aware that a plastic piece has been known to break off after excessive use and since many games come with hundreds of counters, you will be using it a bunch. Their “Heavy Duty” all metal model also works well, but you may have some difficulty with thicker counters since the slot you slide the counters into is somewhat narrow.

Some cardboard counters can be punched quite easily from their frames. Others are more difficult to punch without causing rips and tears. That’s when you’ll need a sharp utility knife, such as those used by modelers. You’ll want to cut the counters from the frames on a hard-durable surface. I use one of the glass cutting boards in the kitchen, but don’t let my wife know that.

Another item you’ll want if you’re playing wargames that use cardboard counters is a good pair of tweezers. That’s because some wargames are more counter dense than others and if the counters are not much smaller than the map’s hexagonal grid, you may have difficulty picking up a single stack in one hex without disturbing or knocking over those in adjacent hexes. That’s when you’ll need tweezers.

Bent tip tweezers work the best. Just make sure they open wide enough to accommodate the size of the counters. Some gamers prefer cross locking tweezers that are squeezed to open and close on their own. I own such a pair. I also recently purchased a pair that has a super wide opening and a small LED light. How cool is that?

Most wargames use dice to determine the outcome of battles and other game events. Rolling them on the game map is a risky proposition as you could accidentally scatter your pieces all over the place. A better option is to use a dice tower or tray. I prefer a dice tray lined with velvet as it creates less noise, whereas my dice tower made so much noise, my wife could not take her afternoon nap. But hey, if you like the sound of the dice rattling down the tower, so be it.

Even without plexiglass, some game maps have enough reflectivity to cause glare, forcing you to shift your head around to see the board and pieces clearly. There’s also the issue of shadows depending on the location of the light sources relative to the players. Diffuse natural lighting is the best, but not always possible given what part of the country you live in and the size and location of your windows. And if you want to create a video of your playthrough, then using the correct kind of lighting is essential. There are several posts on BoardGameGeek discussing the pros and cons of different types of lighting.

If you’re like me, you do your research before buying a game so you can be sure you’re getting your money’s worth. That means buying games you will likely play over and over. But if a game comes with map sheets instead of mounted game boards, too much unfolding and folding will eventually cause holes and tears. To prevent this, I purchased these stackable flat file cabinets. Each drawer is roughly 37 inches wide by 26 inches deep and 2 inches high. They’re perfect for storing standard sized wargame maps. Just unfold them once and they can stay in that state forever. Of course, these aren’t cheap, and they will take up floor space in your game room.

So, there you have it – my list of essential gear for wargamers. Some of these can be used with any type of board game, while others are not only unique to wargames, but in some cases are specific to hex and counter wargames. Regardless, having the right equipment will make your gaming experience less frustrating and more rewarding. If you have other suggestions, please leave us a comment.

A Brief History of Card-Driven Wargames

History of Wargaming Part 1 – Antiquity to the 19th Century

Tips for the Wargame Newbie