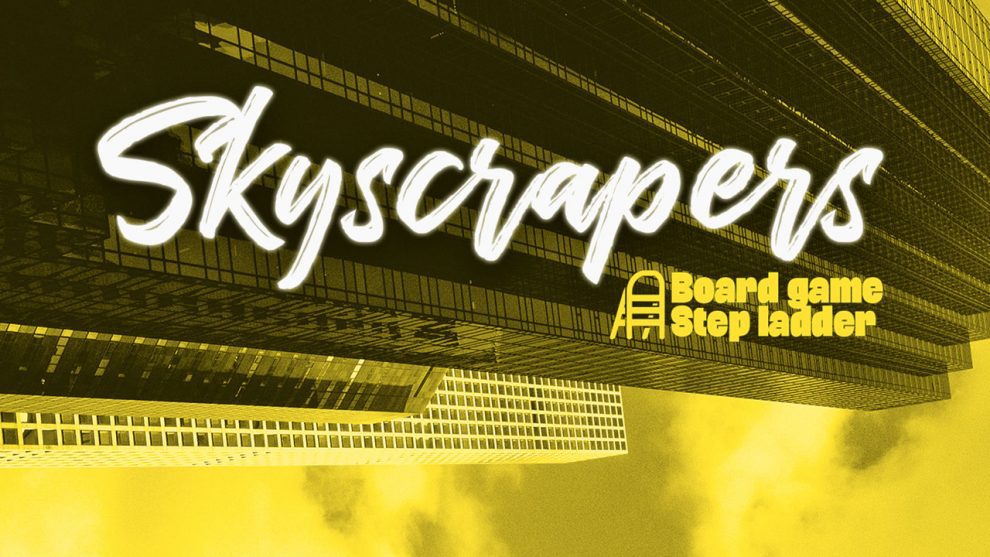 David McMillan @FeldFreak
1 Comment
The theme of today’s Step Ladder is skyscrapers. Join us as we climb ever higher. Enjoy the view from the top, it’s a doozy!

For hundreds of thousands of years, humankind looked longingly towards the sky. Uncontented to keep our feet on the ground, we yearned to explore that new horizon. Being wingless creatures, we did what we could; we built upwards, reaching ever higher with each new attempt.

Join us as we ride up the elevator of today’s Skyscraper.

In 1885 the first skyscraper was completed – a magnificent 10-story marvel. It would be another 18 years before the Wright brothers left the ground behind but in the meantime we kept building ever higher. 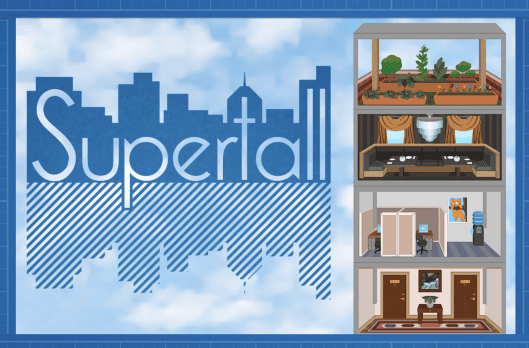 Clocking in at just 18 cards Supertall, designed by Nat Levan and published by Button Shy Games, sees players vying to construct the highest scoring skyscrapers. Each card has multiple uses that affect the game in various ways depending on how the cards are played. Each card has 4 pieces of important information: scoring condition, type, value, and special ability. They affect the game as follows:

It’s a very simple game to learn and play. Plus, at just 18 cards, it can be carried anywhere. That 18 card limit, though, means that most of the skyscrapers in Supertall will usually top out at 2 or 3 floors and only occasionally reach heights of 4 or 5 (a 6-story skyscraper is extremely rare and almost unheard of). As far as depth of game play goes, Supertall manages to pack a lot into its small size. But I think we can agree that 6 stories isn’t very tall and that we can definitely go even higher.

In 1931, construction was completed on the Empire State Building in Midtown Manhattan right in the heart of New York City. It stands at 102 stories with a total height of 1,250 feet. Two years after its construction it would become world famous when King Kong decided to climb atop it. 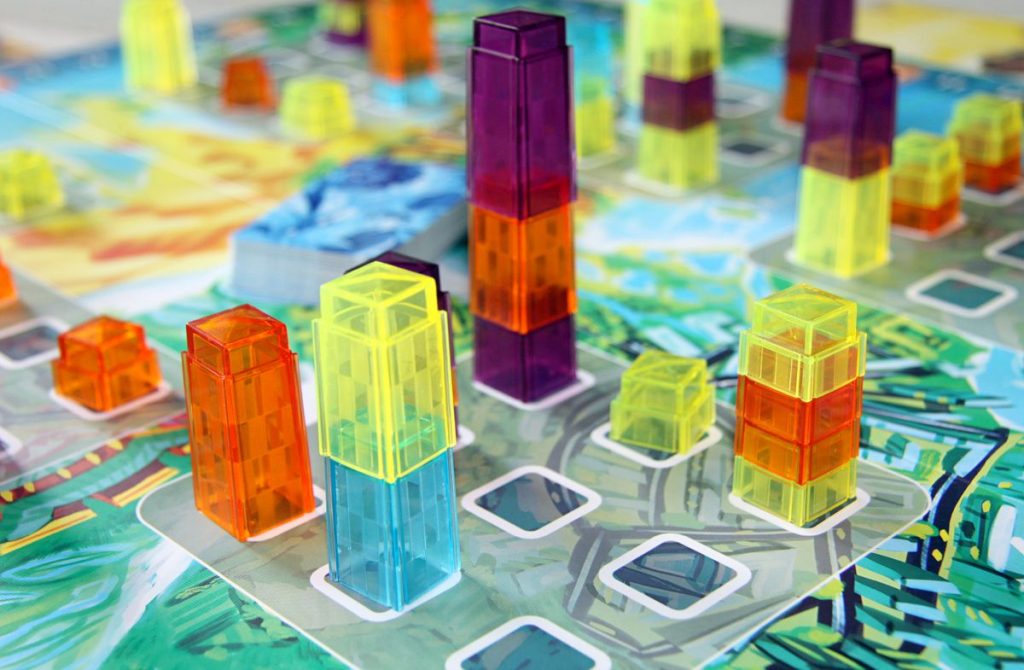 This 1994 Spiel des Jahres winner designed by Andreas Seyfarth (one of only a handful of designers to have ever won multiple SdJs) pits 2 to 4 players against each other in a skyscraper building frenzy. Each player begins the game with a collection of skyscraper pieces ranging in size between 1 and 4 stories. Over the course of the game the players take turns playing these pieces onto the board (which is divided into six 3×3 grids) in an effort to outbuild and outscore their opponents.

At the start of each round the players are dealt a handful of cards that depict where they will be able to play their pieces into the grids. For instance, a card may dictate that you are able to play a piece into the middle spot of the back row of any grid of your choice. The trick, though, is that your middle spot of the back row is different from everyone else’s because your perspective of the playing area is based entirely upon your physical position at the table.

Furthermore, at the beginning of each round, the players choose a selection of their skyscraper pieces to put into a pool and these will be the only pieces they will be able to use during the round. This selection is important because you can’t just add any old piece wherever you want. There are specific rules to follow when building:

Once everyone has placed all of the pieces from their pool an end-of-round scoring is performed. Players will score points for the largest tower in the game, who has the most control in each of the different grids, and how many towers each player controls overall. And, after four rounds of play, whoever has scored the most points wins.

Manhattan is definitely a much more nuanced and complex game than Supertall and it also does a much better job of making the players feel like they’ve constructed massive sky-touching monoliths. The original version of this game from 1994 featured skyscraper pieces that were made out of opaque plastic. The game received a face lift in the form of a gorgeous reprint in 2017 and in the new Foxmind Games version these opaque pieces have been replaced by translucent ones. The overall effect is a sprawling crystal city once the game has reached its conclusion. It’s truly a sight to behold. There is no questioning that Manhattan has great table presence.

If Manhattan’s glistening skyscrapers sing out to you, then be prepared to be even further inspired by the next game on our list.

As of 2020, the tallest skyscraper in the world is the Burj Khalifa in Dubai. At a height of 2,717 feet (over half a mile tall!) with 163 floors (over 16 times as many floors as the very first skyscraper), it’s no wonder that this building and its many cousins all over the world continue to titillate and inspire.

Designed by Gil Hova (perhaps most well-known for his game The Networks) High Rise began its life on Kickstarter back in early 2019. In a nutshell, High Rise is a game about building skyscrapers while trying not to become too morally bankrupt in the process. The wheels of bureaucracy move slowly but things can be sped up if you’re willing to take a few shortcuts here and there.

High Rise is played over the course of 2 or 3 decades (depending on which version of the game you decide to play). The game board itself is divided into a number of sectors (grouped together actions); four of which comprise the city’s neighborhoods. On a player’s turn, they will move their playing piece to any free space in any sector of their choosing and then perform the action associated with that space.

Sounds easy enough, right? Wrong. High Rise is played with a time track. Whoever’s playing piece is the furthest behind will be the next person to take their turn and they will keep taking turns until they are no longer the furthest behind. This creates a lot of interesting considerations. Do you jump way ahead to ensure you’ll get that one action you really want or do you move ahead a little less and hope nobody else takes it? Do you take an action that you need for yourself or should you take an action that would better benefit one of your opponents to keep them from going there?

Some actions provide you with floors (the building blocks of your skyscrapers) whether they be floors randomly drawn from a bag or floors selected by you (usually at the cost of taking on some corruption, which is not an altogether desirable thing). Others provide you with special action cards. Special action cards provide permanent, one time, or once-per-round abilities such as allowing you to draw extra floors each time certain things occur or the ability to add extra floors to your skyscraper above and beyond what you would normally be able to during a build action.

And speaking of build actions, each decade sees a set of blueprints that dictate which floor tiles must be spent in order to construct buildings — buildings that reside in neighborhood spots award their owners bonuses whenever another player stops on that spot. If you’re the first person to use the construction action to build a certain type of building on the blueprints list, then you’ll get to add an extra floor in your building. If the floor calls for “ultraplastic” (a hard to obtain ‘wild’ floor tile) on its upper floors and you’re able to provide it, you get an extra floor for that, too. And height matters because at the end of every decade the largest building overall and the largest building in each neighborhood scores.

This brings me to the concept of corruption. Most actions in the game have a basic thing they do and then a bonus thing they can do if you’re willing to take on some corruption. Take construction, for example. If you build in the neighborhood where the construction action was taken, fine. But if you decide to build in some other neighborhood, then it’s going to earn you some corruption. And corruption’s bad… or it can be. If you’re too far ahead of your opponents on the corruption track, then you’re going to lose victory points during each end-of-decade scoring. Each space on the corruption track has a number printed on it. The further up the track you go, the faster those numbers begin to climb. When the game ends you’re going to lose points equal to whatever number you’re on.

High Rise is a heady mixture of luck, skill, and strategy that requires you to have to constantly balance progression and corruption. There’s a lot to think about and a steep learning curve the first couple of times that you play the game. It’s also a pretty good looking game, too. Kwanchai Moriya’s artwork is stunning and really helps to sell the narrative. As the game goes on, the board begins to fill up with giant skyscraper standees, a feast for the eyes.

From a svelte 18-card game that can fit into your pocket to a massive sprawling table hog, if you’re looking for a game about skyscrapers, there’s one out there perfect for whatever the occasion depending on how high up the Step Ladder you’re willing to go. Just don’t look down! 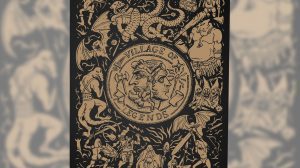 Do you enjoy deckbuilders? How about fantasy role-playing? From wielding powerful weapons to face down fearsome beasts to acquiring spells, treasure, and... 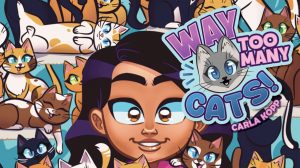 Way Too Many Cats Game Review

Managing a cat adoption agency takes a lot of skill. Do you have what it takes to find your feline friends forever homes? Read our review of Way Too Many Cats... 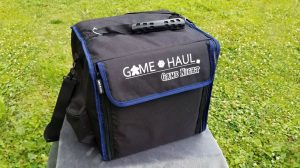 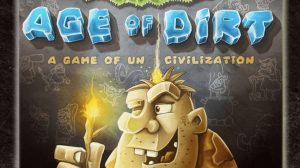