The year is 2849 and humanity has expanded beyond the boundaries of the known universe in search of a new place to hang its hat. Far, far away from here we’ve located a galaxy that seems perfect. It is absolutely littered with planets to colonize and rich with pulsars that  can be harnessed to provide the necessary energy for the transition. Things are definitely looking up, but it’s going to take a lot of work, so let’s get to it!

The game of Pulsar 2849 is a dice drafting game where players use their dice to explore the galaxy, establish and activate pulsars, and harness new technologies in an effort to score the most points by the game’s end. The game is broken into several rounds consisting of the dice drafting phase, followed by the actions phase where the players utilize their dice, and then the cleanup phase where end of round points are scored. At the end of the game, a final scoring is performed and the person who is highest on the victory track is the victor.

If you’re only interested in what I think about the game overall, then go ahead and scroll to the Thoughts section. For the rest of you…

Setting up this game is fairly easy, but can be time consuming the first few times that you do it. Start by setting the game board in the middle of the table and adding the face down planetary system tiles. Then the board is surrounded by three randomly chosen technology boards of different tiers, three randomly selected goal tiles, the dice board (along with the median marker), the gyrodine board, and the die modifiers board. These boards are all stacked with their appropriate tokens.

The transmitter tiles are arranged by letter and each stack is shuffled separately and set into a pile, along with the face down exploration bonus tiles and the engineering cubes. The round marker is placed to the left of the bottom tier of the technology boards and the red die and a single silver die are placed onto the black hole on the center of the board plus two silver dice per player. Each player is given all of the pieces of whichever color they choose to play. After choosing a starting player and arranging the scoring tokens on the score track, the tracking tokens on the initiative and engineering tracks, and the spaceships onto the play order track accordingly, each player places their second ship onto one of the starting locations on the game board and you are ready to begin playing.

At the heart of Pulsar 2849 is the dice draft. This dice selection mechanism not only affects which dice you have to work with during the upcoming round, but it also has a direct affect on turn order in the next round and end of round bonuses. The dice draft is initiated by the first player rolling all of the silver dice and then placing them into their appropriate dice bays on the dice board. For instance, any dice with 4 pips showing would go into the dice bay that has 4 pips showing. Then you find the middle die wherever it happens to be and the median marker is placed in front of that dice bay.

Once this has been done, a snake draft is performed beginning with the first player. When selecting a die, you will have to move either your ship on the initiative track or your ship on the engineering track a certain number of times and in a certain direction. If you selected a die that was two dice bays to the right of the median marker, for instance, then you would move one of your ships two spaces to the right. The dice draft ends once everyone has selected 2 dice each. In a 2-player game, there will be 3 dice remaining. At all other player counts, there will only be 1.

Right off the bat, Pulsar 2849 is going to give you a lot of different ways to utilize your dice. Instead of taking turns placing them individually, each player, in turn order, will take their entire turn. In the interest of keeping this brief, I’m not going into a ton of detail about the different actions. I’ll let you discover that on your own. In general, dice can be used to:

Engineering cubes are earned in various different ways (being first on the engineering track, for example) and can be turned in at different times for different effects. During the dice drafting phase, there was a single die leftover. During a player’s turn, they can discard 4 engineering cubes to copy this die using the red, bonus die. These cubes are also used during end-of-game scoring in order to gain additional points from the End Goal tiles.

For example, let’s explore the second, third, and final tier of the suggested starter technologies. First, the second and third tiers:

Looking at the second tier and going from left to right:

Looking at the third tier, left to right:

Looking at the final tier:

These are just a few examples of the various technologies that you might encounter during the game. There are four technology tiers and each of these has 2 double-sided tiles that could be used. That means that there are 128 possible combinations.

End-of-Round and End-of-Game and Scoring

Each round ends with a scoring. First, players will earn points for each spinning gyrodine that they have equal to the amount shown on the tile. A spinning gyrodine with a value of 3 would earn the owner 3VP, for instance. They might also score points from completed transmitters and some technologies. 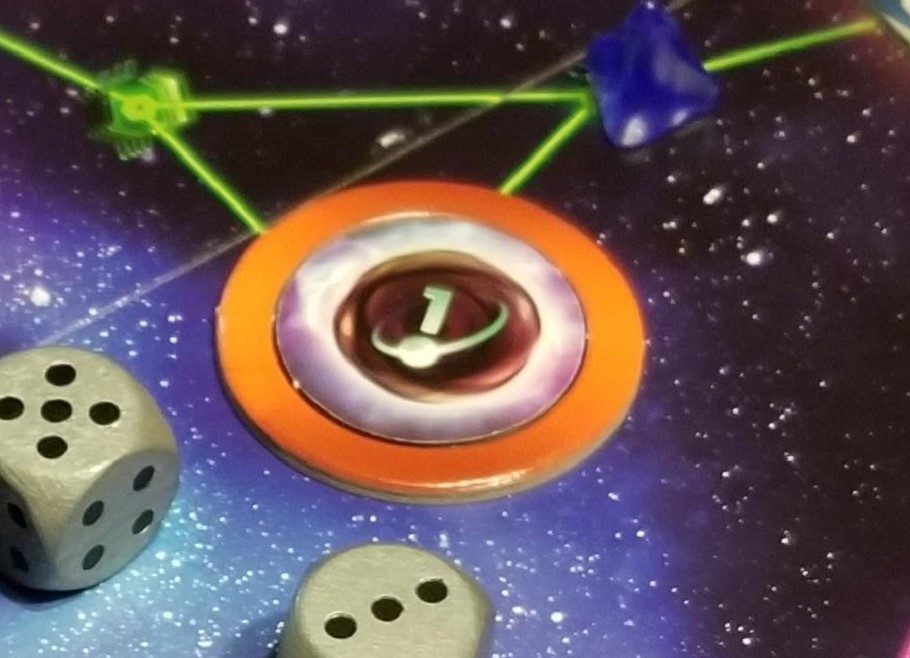 Once the 8th round has come to an end and the end-of-round scoring has been performed, a separate end-of-game scoring takes place. Players earn points for end-of-game technologies, various end goal conditions, claimed pulsars, gyrodine tokens, leftover engineering cubes, being in first/second/third place on the initiative track, and also points based on the number of colonies they’ve got on the board. After all of the points have been calculated, the player with the most VP wins the game.

Illustrated by Sören Meding, Pulsar 2849 is a game that calls to you from the table. There is no denying its presence. Stretched end to end, the game board and all of the sprawled out components resemble a comet made up of bright, popping colors on a backdrop of deep blues and purples. All of the components are of very high quality and I would expect nothing less from a game produced by Czech Games Edition (CGE). I have played a few of them and all have impressed me with their craftsmanship and attention to detail.

Pulsar 2849’s quality extends beyond just its visual presence, though. The game play is phenomenal. From the very first roll of the dice, you are challenged with weighing your dice selection against its overall benefit to you, its overall benefit to your opponents, as well as to how it will affect your movement on the initiative and engineering tracks. Even though you’re just picking a couple of dice, those decisions are in no way easy to make.

Then you’re tasked with having to actually use the dice. There are so many viable strategies and so many things to do with your dice that it’s a rarity you’ll ever have a completely wasted turn. And, if you’re worried that lousy dice rolls will hurt you, there’s so much luck mitigation built into this game that bad luck is almost a non-factor. The worst luck comes from your opponents taking a spot or utilizing a resource that you were hoping for. This large pool of possibilities is both Pulsar 2849’s greatest strength and its greatest weakness.

Between moving your ships, assembling transmitters, claiming technologies, building pulsars and setting them spinning, or taking the +/-1 tokens or +2 tokens, there will always be a million things that you want to do, but never enough time to do it all. This makes for some very interesting analysis paralysis (AP) inducing turns. So be forewarned, a single game of Pulsar 2849 can take a while. I’d wager an average game will take much longer than the playtime advertised on the box. In addition to  the potential AP issues, I do have a couple of other small concerns that you should be aware of.

In some play throughs there has been a runaway leader problem. This is particularly prevalent when someone gets a few gyrodines up and spinning early on while everyone else is still struggling to get something going. Those gyrodines generate a hefty number of points and it can be very tough to catch up to (much less surpass) the lucky person who has surged into the lead in this way. The other, much smaller issue is that some of the mechanisms in the game, particularly the transmitters, feel a bit superfluous. While it’s always a good thing in games like these to have a multitude of options to choose from, you can sometimes have too many. Because of this, the game can feel a little overwhelming at times.

Regardless of that, though, I love this game. Vladimir Suchý, best known for his games Last Will and Prodigals Club, has created a masterpiece in Pulsar 2849. This is a game that is rich in strategy and depth. Beginning with the very first roll of the dice to the final scoring, you are going to constantly be assailed with tough and agonizing decisions. If that doesn’t sound appealing to you, then you’ll most likely not enjoy your experiences here. But if you’re like me and you enjoy a good puzzle and you love being challenged at every turn, then you’re going to love this amazing game, too.