Board Gaming on the Go!

Mobile apps for board games have become more prevalent in the past years and Asmodee Digital has dug up CMON’s first game in the wildly successful franchise Zombicide to your mobile device.  On the app you are able to play through a single player campaign as a group of survivors seeking to escape a city overrun with the undead. In this review I will be laying out the similarities, differences and my overall impression of how a large and miniature-heavy board game like Zombicide has been digitized for your active gaming lifestyle.

How Does One Zombicide? 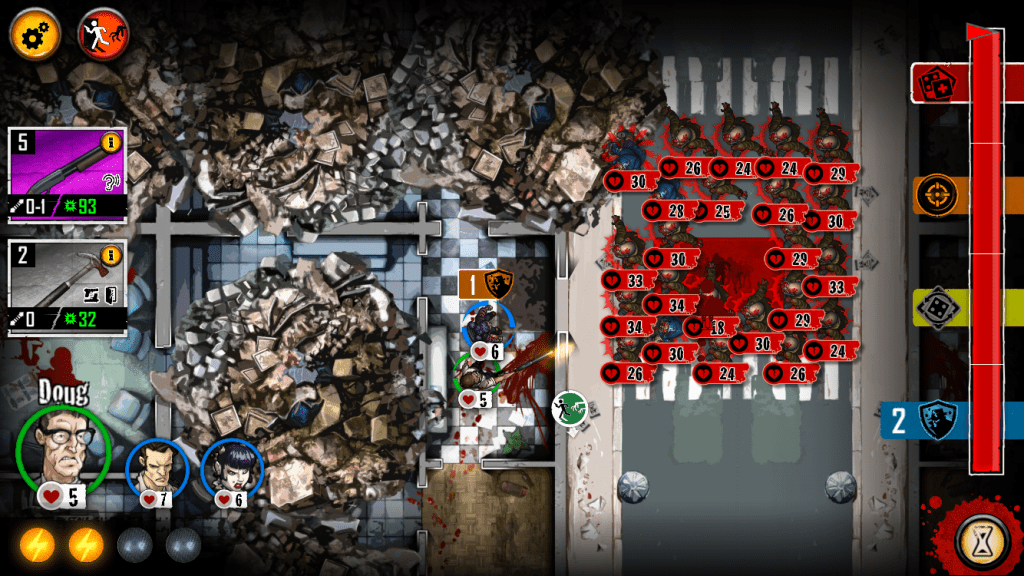 Zombicide sets you in the role of a group of survivors trying to flee an overrun city.  Each mission is comprised of a set of turns between survivors and zombies as you attempt to achieve a certain set of objectives.  These objectives can be as simple as killing some zombies or as complicated as searching for specific keys to open set doors so you can loot items for your team. 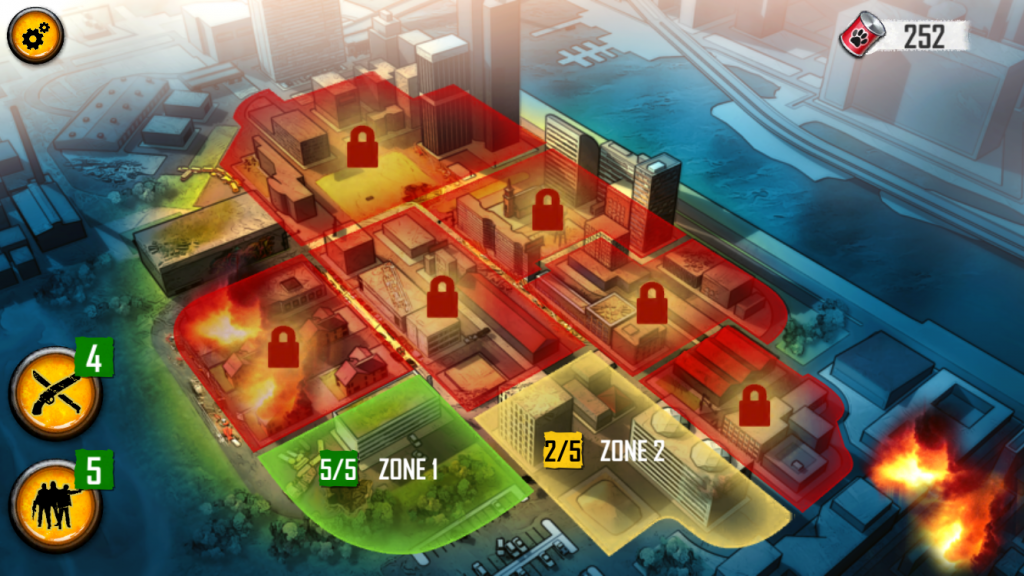 Each survivor has a set number of actions they can take per turn and you can switch between survivors action by action to make the most out of your turn. Clever choices will help you battle back the undead and attempt to forge a path towards your goal.  Using your actions efficiently is key as any wasted movement will cost you dearly. In this sense Zombicide Mobile is almost more of a puzzle game than it is a straight combat game. You will never fully clear the board of the hordes of undead thrown against you since the more you kill, the more that spawn; drawn by the noise you are creating.  Instead, you must skillfully navigate the map, making use of ranged and melee weapons as well as your team’s specific skills to make it out alive. 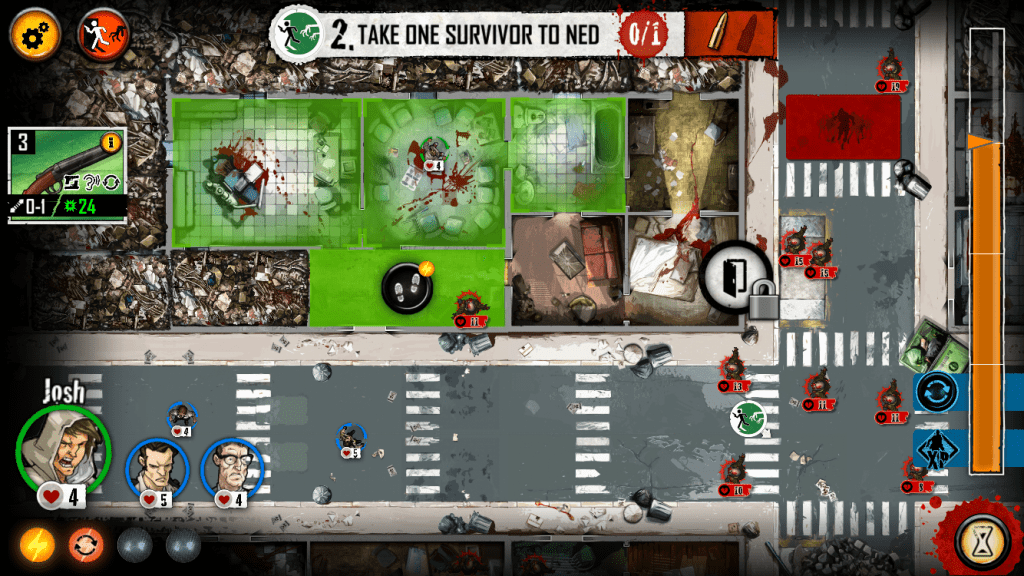 What is similar? What is the same?

You may be asking yourself how a miniature-heavy co-op game could find its place as a single player app and the answer is small tweaks.  While the general idea of the game is the same as its board game big brother, Zombicide Mobile breaks from its predecessor in a few ways.

The first is that combat has been “simplified” from its previous version. In the original game only certain powerful weapons were enough to deal damage to the tougher enemies, such as fattys and the abomination.  In the app version all weapons have a damage range that increases based on the weapon type and rarity. Fattys for instance simply have more health than their smaller compatriots making them tanky and tougher to take down.  Also, any veterans of the board game remember the difficulty of hitting runners hiding in the horde unless you ran in and used a melee weapon which was just suicide. Again the app seeks to smooth over this wrinkle in tactical planning by doing away with that rule, allowing all ranged weapons to randomly hit enemies in the targeted square unless you’re a sniper, which is invaluable! 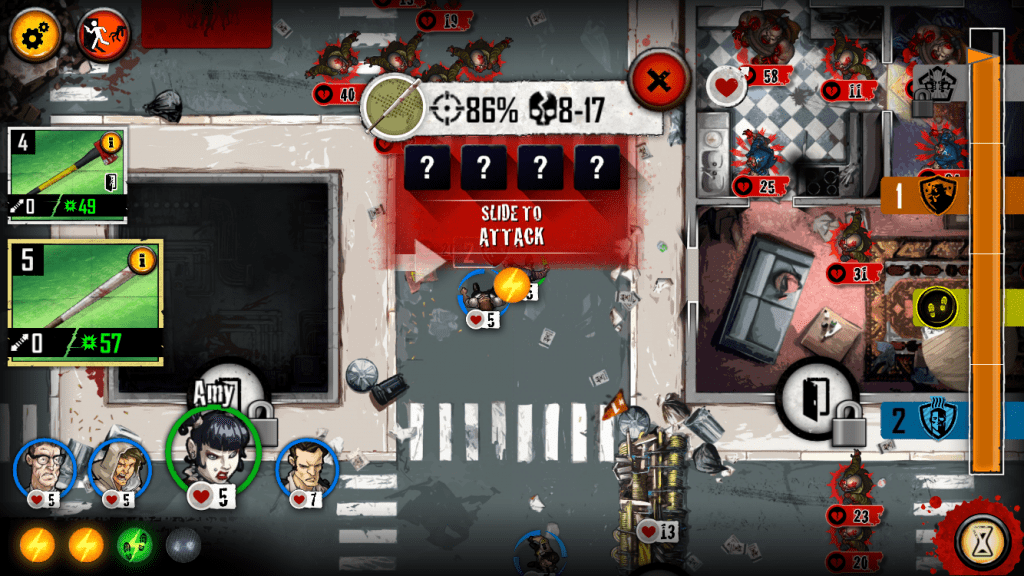 While combat is a bit different, the most glaring change from the original is the leveling system for characters and weapons.  Whereas in the past characters simply leveled up as they took out zombies and completed objectives in the past, now they must actually level up outside of each level by consuming dog food, which is the currency in the game.  As your character levels up they gain access to better abilities that are unlocked as the threat on each level rises. Having high level characters is key to surviving the longer missions that spend more time in the red zone.  Weapons function by using a simple rarity system, and each weapon has several levels that increase their damage and effectiveness. 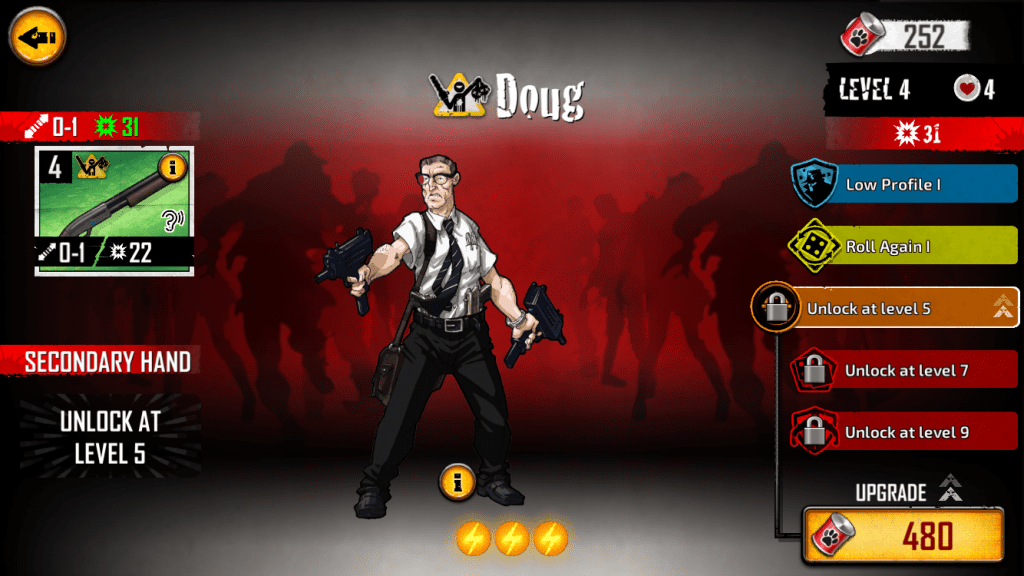 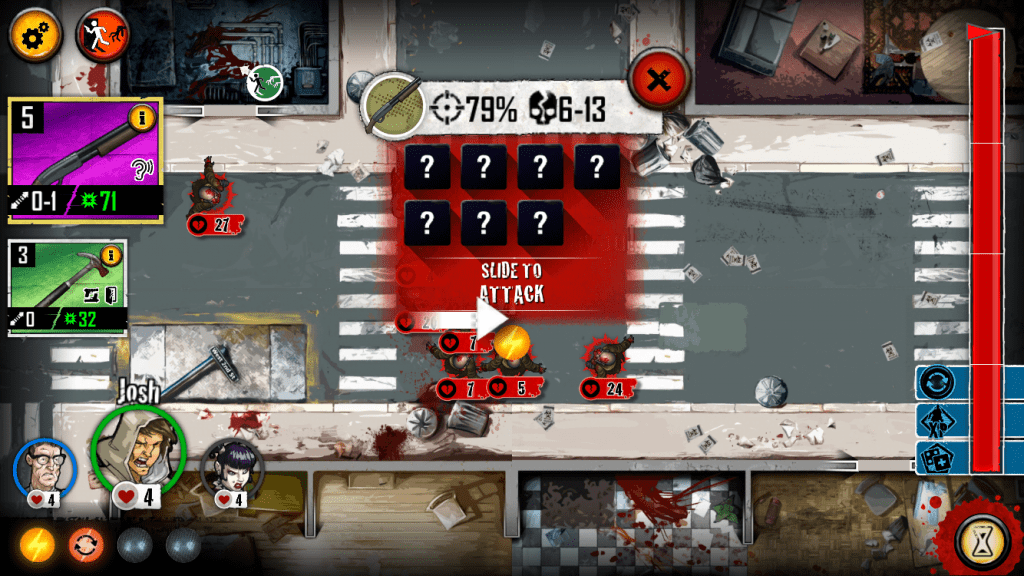 Zombicide Mobile is a really fun adaptation of a game I love, and I was so happy to get the chance to review it.  Zombicide kept me entertained for hours and always felt as though I was building on previous levels. Some of the later levels were just huge and the scale and pacing was very satisfying throughout my plays.  I enjoyed planning and calculating how to best use my turns to achieve success and felt as though less was left to luck than in the board game version. If I had planned correctly I rarely felt like things just went awry and there was nothing I could do to stop it.   The characters feel very unique and play very differently depending on their abilities. Overall, a nice fix if you want to use your brain while shooting a bunch of brain dead undead.

As I mentioned above Zombicide is an adaptation of a board game and I truly mean that.  It does feel and play differently from its predecessor. There is no co-op presently and I do not see much replayability after one very enjoyable playthrough.  I did feel like sometimes I was truly playing a puzzle game that was skinned as a zombie game which I never felt on the tabletop version of it. Perhaps it was because I was controlling all of the characters that made me feel this way. While that was not a bad thing I did feel different playing the app than the board game.  As I mentioned I loved the characters but the roster is somewhat limited and to gain new characters you have to buy them as DLC which I always hate to see on a app that already has a base cost attached to it. 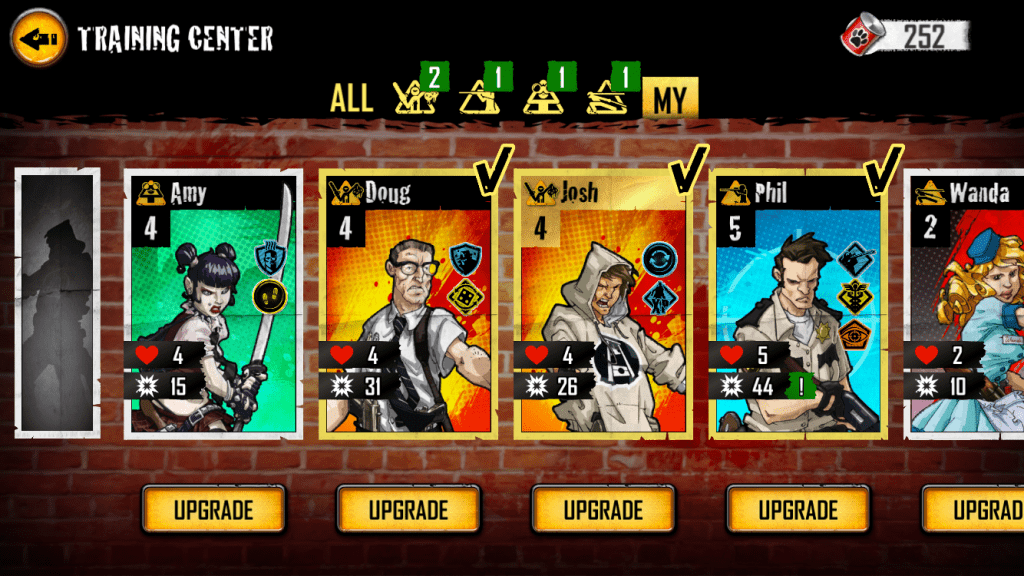 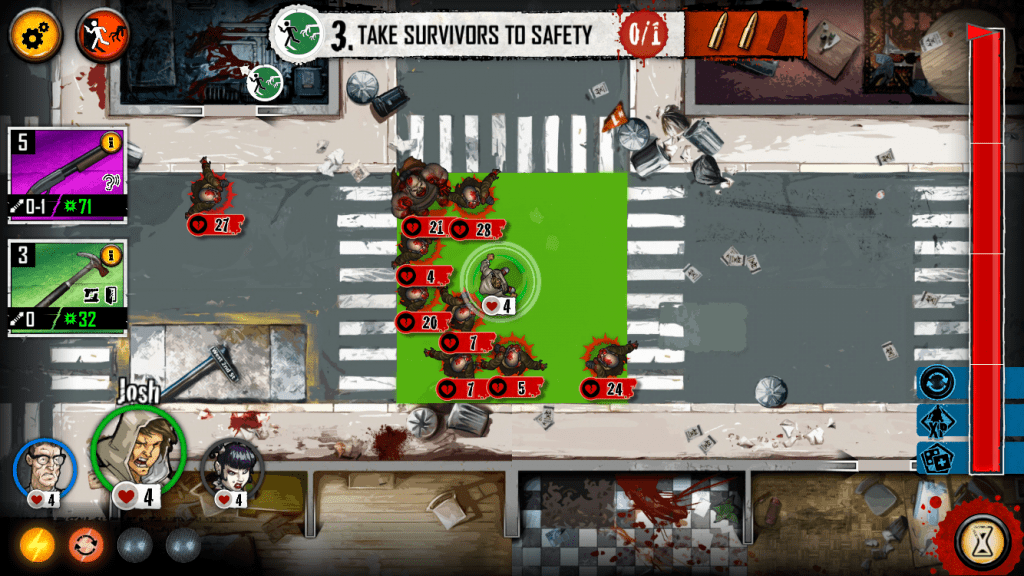 Zombicide fills the ever growing niche of “board games to go” and I am so happy to see it join the ranks.  It plays quick and keeps you thinking as each level is unique. The Zombie heavy abstract puzzle blast that is Zombicide has a good bit of polish and the controls manage nicely.  A selling point to me is the Candy Crush-like compulsion to play the next level and keep leveling up your team. On the Candy Crush related flip side I felt as though I was puzzle questing more than fighting for my life against the undead. Overall  I really enjoyed my time with this app and am glad to have it on hand. I am very hopeful there is a release of further titles with an expanded item, character and environment repotriore (cough black plague cough cou….brainsssss.) There is a lot of fun and potential here and I am happy to support Asmodee Digital and look forward to what they create next!