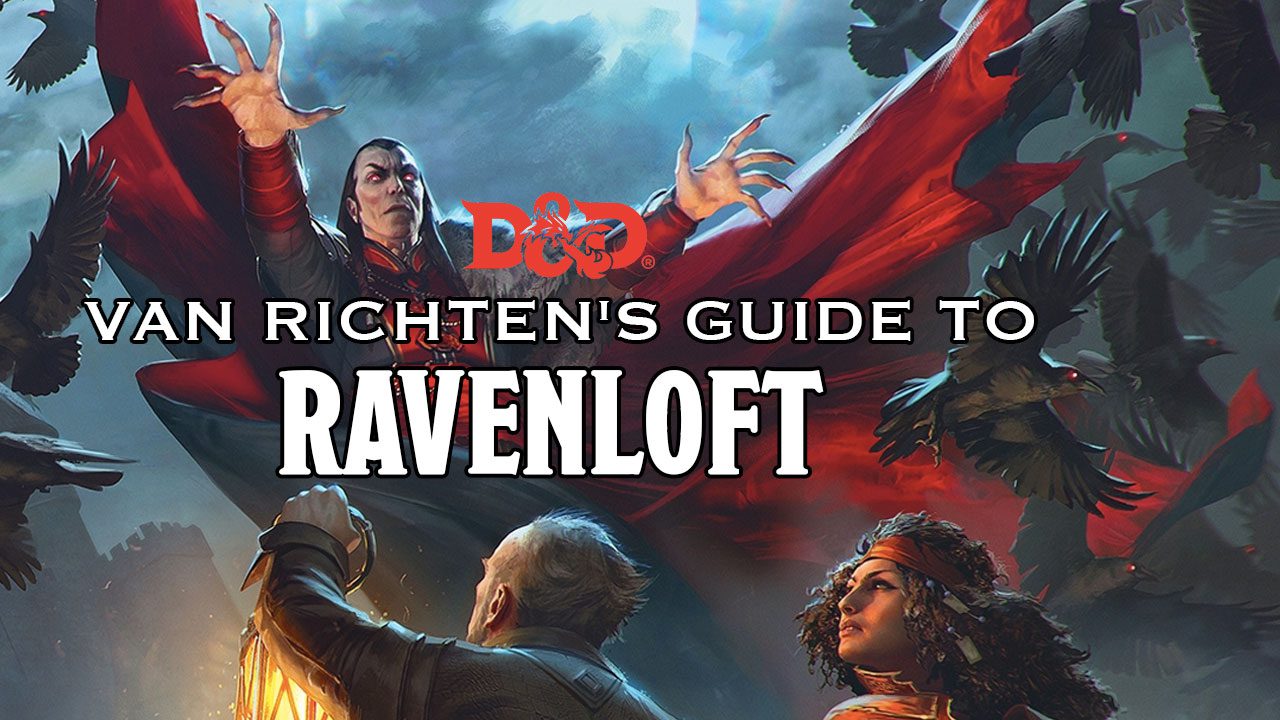 Than Gibson
Add Comment
Explore the Domains of Dread with new horror settings and dark character options in the latest book for Dungeons & Dragons.

In 1983, Tracy and Laura Hickman introduced the world to Ravenloft and its Darklord, Count Strahd von Zarovich. In that landmark adventure module, players experienced a story involving a villain with complicated motivations and a land of gothic horror trapped in a sea of mists. The module received awards and was popular enough to spawn a sequel and eventually an entire campaign setting. 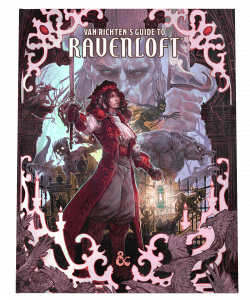 As the setting expanded, it was revealed that Ravenloft was not just Strahd’s domain, Barovia, but possibly countless Domains of Dread where Dark Powers imprison Darklords in their own twisted desires, failures, and despair. Each of these Domains of Dread is its own island in the impenetrable mists, impossible to enter or leave unless the Dark Powers allow it. No two Domains are alike, crossing all possible genres of horror. You might encounter a legion of zombies, a dark carnival, or the cultists of an ancient, forbidden, entity.

When the Dungeons & Dragons team published the adventure campaign Curse of Strahd (which was based on the original adventure) for Fifth Edition many fans of the original setting once again asked for material beyond the land of Barovia. Van Richten’s Guide to Ravenloft (named after Ravenloft’s famous Monster Hunter) delivers that along with many other options and tools for running your own horror-based Dungeons & Dragons game.

The largest chapter of this 256-page book details the Domains themselves and enough material to get a Dungeon Master started on adventures in that domain. In total there are 39 Domains covered with 17 featured in depth. Each of these falls under at least one (in many cases, several) genres of horror. Barovia is, of course, listed here. But beyond it, here are a few highlights:

Bluetspur – A dying, alien world overcome by mind flayers who serve their mad God-Brain and lure victims there for experimentation and sustenance for their insane overlord.

The Carnival – A travelling domain that entertains  adventurers with its band of performers. Secretly, their leader is hell-bent on vengeance and moves her troupe from plane to plane, keeping one step ahead of  the dark fey that seek to terrorize them. 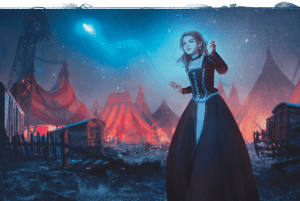 Mordent – Home to the House on Gryphon Hill, setting of the second-ever Ravenloft adventure that formed the foundations of the Domains of Dread as well as other key Ravenloft personalities. This land is unique in that it is ruled by a ghost who has caused a horrible catastrophe from an experiment gone wrong preventing souls from moving on to the afterlife. Instead their ghostly forms linger in Mordent where ghost stories are abundant.

In addition to the pre-defined Domains, there is a framework for creating your own Domain of Dread with its own Darklord. Darklords are described as the “villains at the heart of each sinister realm.” Darklords possessed great power in a previous life which corrupted them to the point of no redemption. For that reason the Dark Powers have imprisoned them within their Domain, though the exact purpose for doing so is a mystery. The provided framework helps the DM to understand their Darklord and then enables the DM to build the domain out around them. You can choose which genre of horror best fits your Darklord and then populate the Domain with monsters, villains, sites, and plots that support the Darklord’s torment.

Other tools that can be added to your Campaign Kitbashing Toolkit are Curses, Fear, Stress, Haunted Traps, Survivors, and of course, Monsters.

Lastly, there are several new options for player characters.

New lineages are available that can replace the racial traits of a character’s original race even though they may look similar to their original form. The dhampir is a humanoid that has vampiric traits, possibly due to parentage or a curse. You gain an increase in speed, no longer need to breathe, the ability to spider climb as part of your regular movement (once you reach 3rd level) and, of course, your vampiric bite. This bite not only counts as a natural weapon but also allows you to either regain hit points equal to the damage done or a bonus to your next ability check or attack roll equal to the damage done. There’s a nice bit of flavor where you have advantage on the bite attack if you are missing half or more of your hit points which can be interpreted as a desperate hunger frenzy.

Hexbloods are beings infused with eldritch energy that may be on the path to becoming a hag. They are considered fey and can harmlessly remove a lock of hair, a nail, or a tooth to create an Eerie Token. This will allow you to communicate telepathically with the creature carrying the token or use it as a remote viewing sensor. Hexbloods also gain the ability to disguise themselves and place hexes per the spells.

Lastly, the Reborn are people who have returned from the dead due to a curse or strange experiment. They gain a number of deathless traits like advantage on poison saves, resistance to poison damage, and advantage on death saves. They also do not need to eat, drink, breathe, or sleep and can finish a long rest after only 4 hours of inactivity. Reborn also can call on glimpses of a past life to aid them in a skill check, giving them a d6 roll to add to the result of the check. 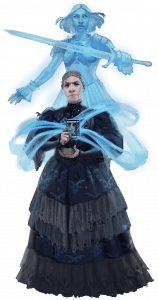 There are also two new subclasses: The College of Spirits for bards, and the Undead patron for warlocks. Both of these give a shadowy bent to these classes. I personally would have preferred more, even if some of them were reprints or updates of existing subclasses. It would have been nice to see that every class has a dark subclass option available to them.

Bards of the College of Spirits might use seances or Tarokka readings to communicate with the dead and gain their abilities. These spirits can guide and aid but also you have the ability to call forth one of their stories. This Spirit Tale is told/given at random when you use your Bardic Inspiration but all of the tales have potency to them. Some may give advantage or bonuses, some do damage or bestow a condition, and some allow you to manipulate the battlefield. Then, at 6th level you can conduct an hour-long ritual with other willing participants to temporarily learn one Divination or Necromancy spell of the appropriate level from any class. This can be done during a rest session and may be crucial at higher levels to raise someone from the dead (typically not available to bards).

Warlocks of Undead Patrons could serve a powerful undead being such as a powerful lich, vampire, or mummy lord. You first gain a Form of the Dead where you physically manifest the aspects of your patron and then gain temporary hit points and the ability to cause fear in those you attack. At 6th level you no longer need to eat, drink, or breathe and can do extra necrotic damage on your attacks while you have manifested your Form of the Dead. From there, your body is infused with necrotic energy making you resistant (or immune if in your Form of the Dead) to necrotic damage and able to release an eruption of necrotic energy when on the brink of death. Ultimately, you gain the ability to leave your body and take on a spirit form with many of the same abilities as a ghost.

There are also Dark Gifts that a DM can allow players to take upon character creation or give out later as a boon. These are special abilities that usually come with a dark cost. This is another great way to introduce that dark twist to any campaign whether it is in Ravenloft or not.

Van Richten’s Guide to Ravenloft delivers on its promise of bringing horror into Dungeons & Dragons. Whether you are looking to run a Ravenloft campaign, your own homebrew horror campaign, or just inject some darkness into a single adventure, this is a great resource for Dungeon Masters. For players, the new options, though few, are solid with many new ability options that change things up from the standard offerings in the Player’s Handbook.

The Art Design is high quality as always, though in some cases I would have preferred a clearer illustration of some of the primary characters. Most of the Darklords are illustrated but there are a few that do not have an artistic depiction. The maps of the domains (though small to conserve space) are well done. This would be an instance where purchasing a digital copy may be advantageous as you will most likely have access to a high quality image file of each of the maps.

Overall, Van Richten’s Guide is well worth the price if you are looking to add horror into your Dungeons and Dragons game. If that does not interest you, especially if certain types of horror may trigger discomfort or stress in your players, this is probably not the book for you. The great thing about Dungeons and Dragons is that there are many different genres that can be worked into it and you can create your own imaginative stories with any of them. I look forward to seeing more of those genres appear in official Dungeons and Dragons products. 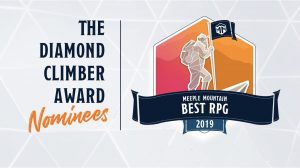 Join us as we review the 2019 Best RPG nominees for Meeple Mountain’s 2nd Annual Diamond Climber Board Game Awards. 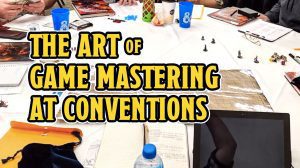 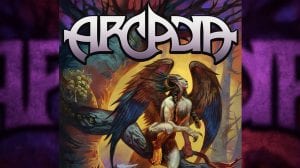 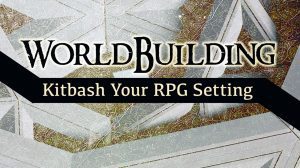 Enrich your world with intellectual property based RPG products and "kitbash" your RPG campaign.