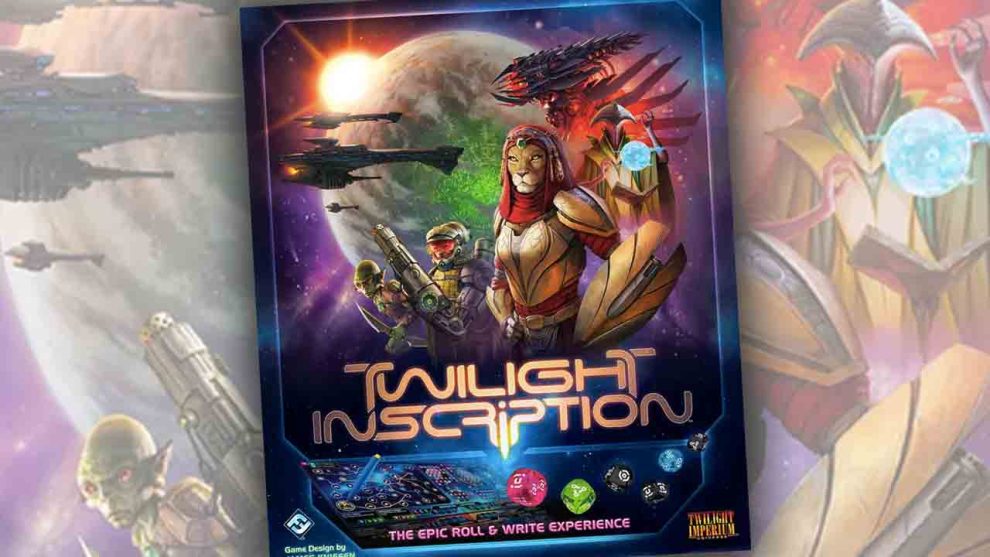 Zack Church
Add Comment
Roll-and-write your way across the galaxy in our review of Twilight Inscription, using your economic skills, political capital, and fleet of starships to claim the Imperial throne!

My three favorite holidays are Christmas, Thanksgiving, and Twilight Imperium Day. As a married guy with kids who mostly games with other married people with kids, I get to play the game once, maybe twice a year. It ends up being a big production—I make a big pot of chili, another friend creates a playlist of epic space music, and another has brought in thematic lighting that changes depending on what’s currently happening in the game. It has transcended tradition and become a celebration of its own for me.

Why only once a year? For those who don’t know, Twilight Imperium is a massive, brain-melter of a game. In my experience, it takes about an hour to walk through the rules with a quasi-experienced board gamer and can take anywhere from 8-12 hours to play depending on player count. It has a number of great elements: area control and wargaming, political intrigue and subterfuge, economy/resource building, and a tree of technology for you to research that will often vary depending on which alien race you’re playing. And those are just some of the elements of the game.

You may have noticed, but this review is not actually about Twilight Imperium, a game that has been discussed at length and has its own subreddit. However, it would be impossible to talk about the newest title in the Twilight Imperium universe, Twilight Inscription, without giving this background first. Twilight Inscription is an epic roll-and-write for one to eight players. Fantasy Flight Games has distilled the original struggle for galactic supremacy down to a roll-and-write experience that is much more manageable from a time perspective, while still scratching that bigger game itch.

In Twilight Inscription, you will choose one of 25 different factions, each representing the different alien races seeking to take over as rulers of the galactic empire. You are then presented with four sheets—Navigation, Exploration, Warfare, and Industry, as well as a neon-orange dry erase marker. You will navigate through 23-25 phases of the game, using resources and influence to explore the galaxy, claim planets, construct space armies, and accumulate both economic and political capital. These will give you opportunities to claim victory points and at the end of the game, whoever has the most victory points wins! 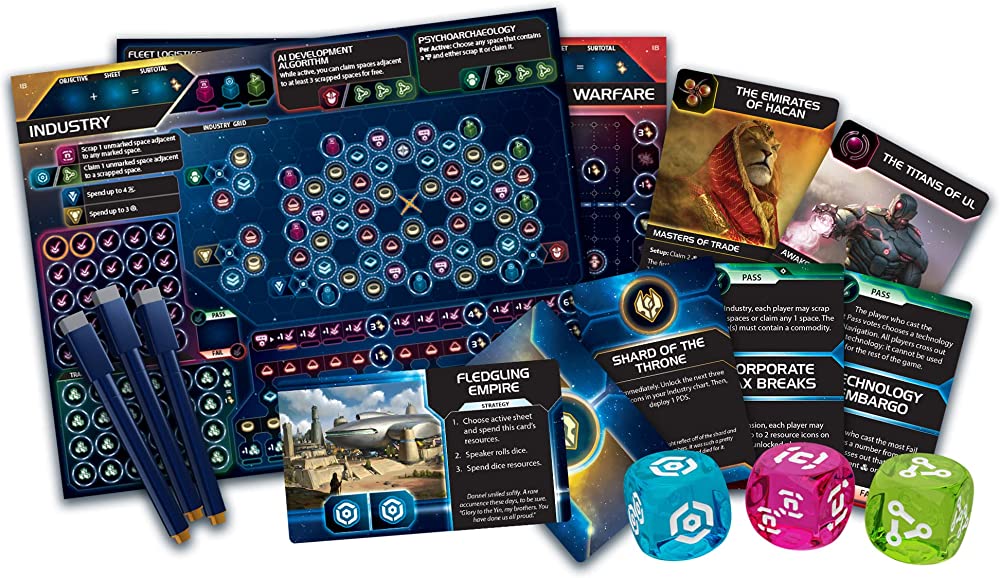 Twilight Inscription does a great job translating many of the elements of the larger Twilight Imperium into a roll-and-write game. You are still vying to claim the capital planet Mecatol Rex, building Dreadnoughts and War Suns, and researching technologies to hone in a strategy to allow you to claim the victory points you’re hunting down. Additionally, the flavor of many of the factions translates over seamlessly—the Hacan get additional bonuses out of the trade goods they are accumulating; the Embers of Muaat get their prototype War Sun without having to research it. The additional factions aren’t the only game elements being ported over from the Prophecy of Kings expansion either: the new Relic cards also make an appearance and grant you additional powerful abilities and/or victory points.

Another way in which the game can be similar to its predecessor is the inevitable analysis paralysis–that dreaded board game affliction where you are stuck trying to decide which choice to make. Twilight Inscription attempts to limit the number of choices you can make by having you select an Active sheet where all of your actions must be played for each turn. Even the act of choosing the Active sheet can be debilitating. Do I try to get more council votes for the upcoming Agenda phase, or build up my armada to try to win the next combat? As the game progresses and you unlock new technologies and focus dice (which grant you additional resources on each turn), those decisions can become even more complex and convoluted.

One thing I want to make clear is you will not get the full “Twilight Imperium Experience” out of this game, and if that is your expectation going in, you will likely be let down. There is no area control element, and combat has been simplified to largely “who has built the most ships over the past few turns?” Likewise, the Agenda phase, while it affects the game, does not have the serious ramifications some of the Agenda cards can in Twilight Imperium. This means that the debate of how votes will land amongst the Galactic Council is usually greatly reduced. The player bartering element, where people can trade promissory notes, commodities, and even promises to attack other players wouldn’t really work in the roll-and-write genre.

The largest difference in the two games is the absence of the board.In Twilight Imperium, you are all on the same board interacting with each other and the decisions of another player might severely hurt or help your strategy. In Twilight Inscription each of you are on your own individual boards. While this is common in roll-and-writes, this takes away from the communal aspect of the original game’s experience. If you are that type of player, Twilight Inscription may not be the game for you.

If you enjoy big roll-and-write games like Hadrian’s Wall, I can almost promise you will enjoy Twilight Inscription. While 25 may seem like a lot of turns, the fact that your engine is slow to build makes each decision a tight one. If the idea of a race for galactic dominance through political, economic, or military might intrigues you, give this game a try. If you are a solo gamer, this game can be especially good:I have managed to get my solo runs in just under an hour, with minimal set up—and discovered it offers lots of replayability. While I will keep my holiday tradition of getting the group together to duke it out, play mind games, and maneuver to control the galaxy, Twilight Inscription will make it to the table much more often, and let me dip my feet in the Twilight Imperium universe without having to devote an entire day to the event.