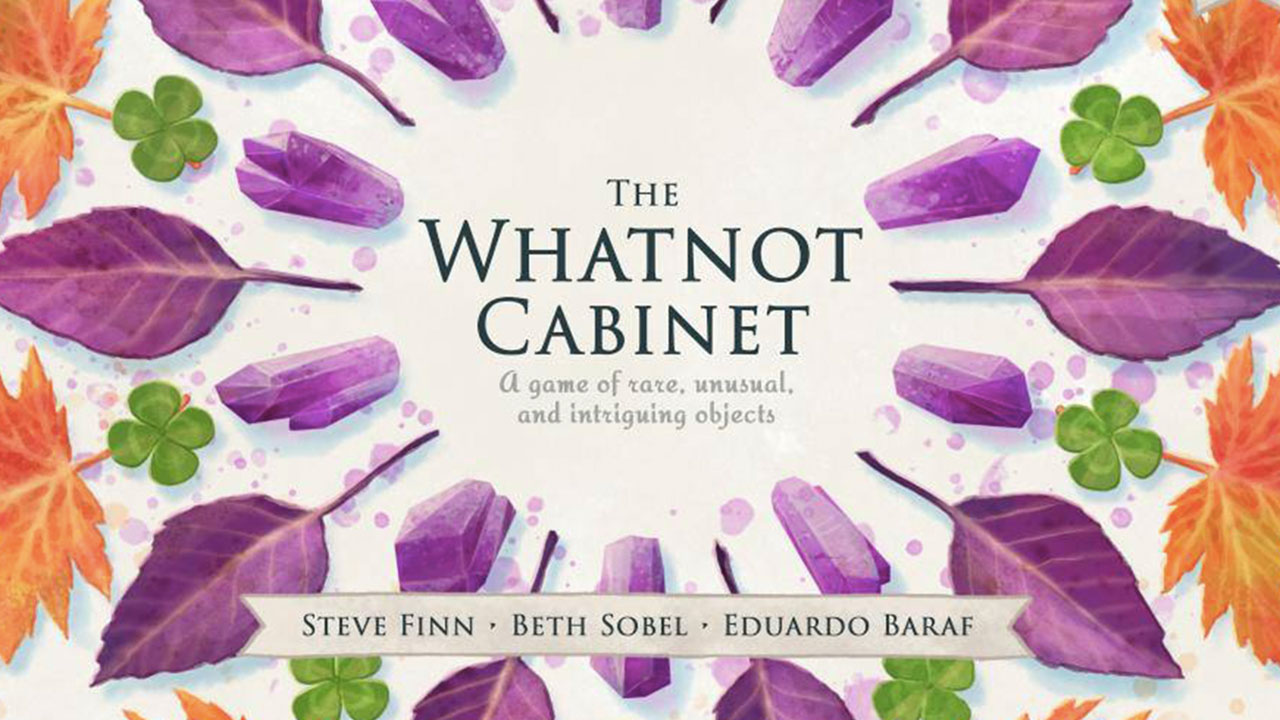 If you’ve ever gone for a walk in the woods, taken a stroll along the strand, or rambled near the riverbank, then you might have come across a “whatnot”. Perhaps you might hear them called an oddment, knickknack, curio, or any number of other words all meaning the same thing: a small “found object or treasure”. These whatnots can be leaves, uniquely shaped rocks, crystals, or any object that serves to remind you of a specific time and place. Many people bring these items home and display them on shelves, tables, or desks where they become centerpieces of conversations for years to come. 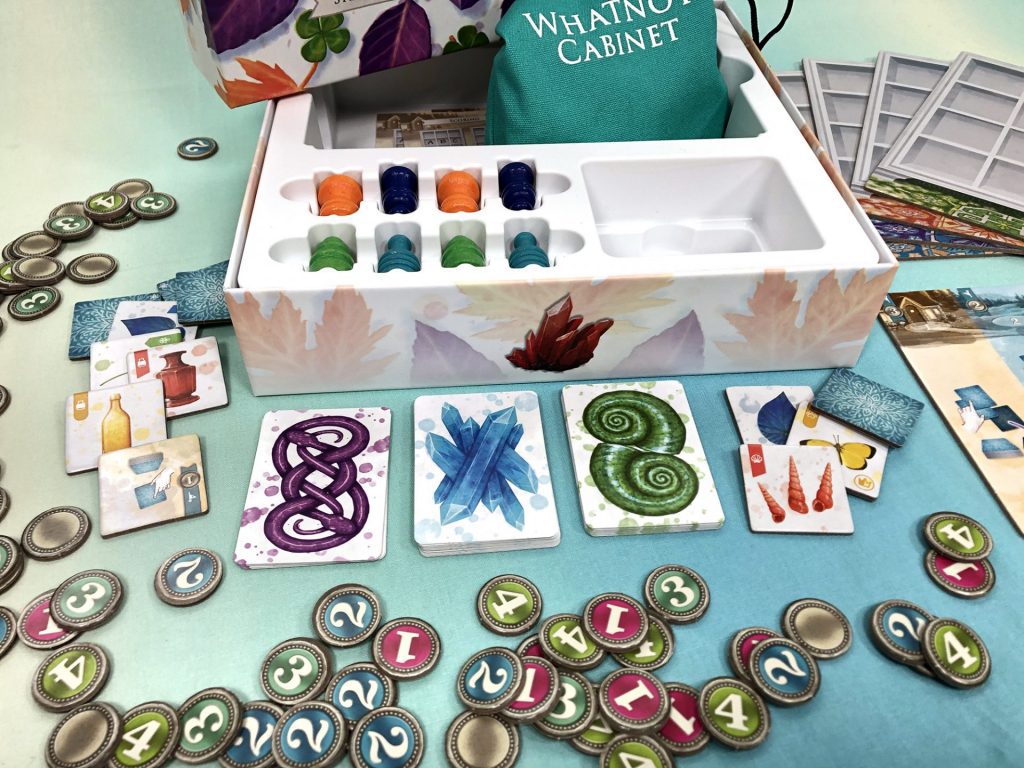 Our friends at Pencil First Games (and the team behind Herbaceous, Herbaceous Sprouts, and Sunset Over Water) have a brand new game on Kickstarter called The Whatnot Cabinet: a game of rare, unusual, and intriguing objects. Join us as we sashay through The Outdoors looking for trinkets to add to our whatnot cabinet.

The Whatnot Cabinet Overview

The Whatnot Cabinet is a light tile placement and set collection game based around finding interesting objects (tiles) in “The Outdoors” and adding them to your personal whatnot cabinet.

On their turn a player will select and perform one of 5 actions from the shared Journey Board. While the specifics of each action vary, the end result is that a player will be adding 2 object tiles into their cabinet, potentially collecting rewards for completing rows or columns, or for accomplishing one of the 5 random Curiosity cards laid out at the beginning of the game. 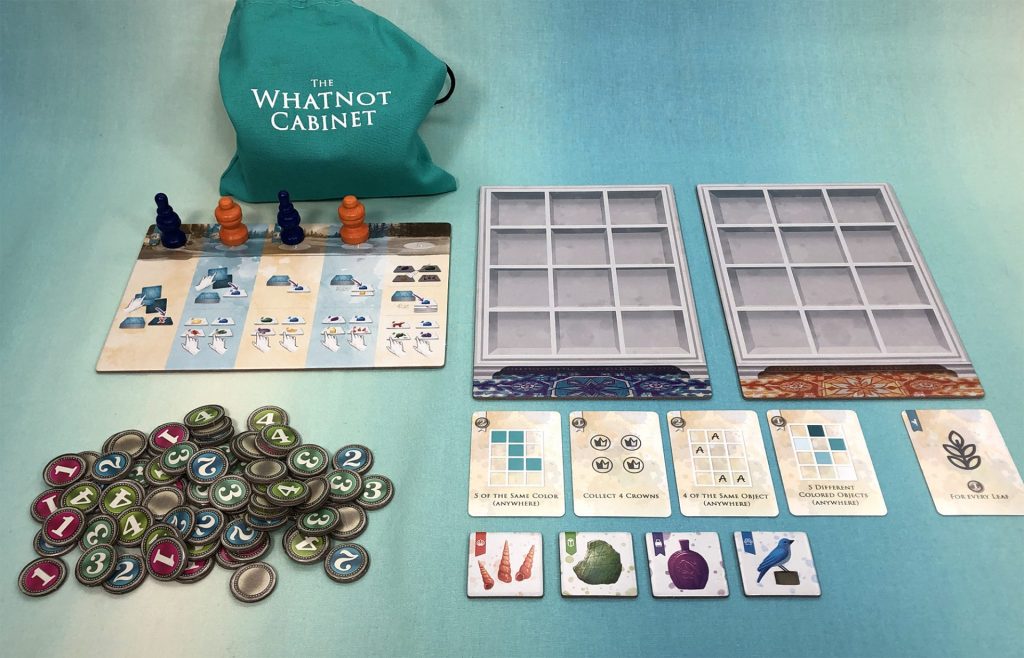 A Peek Inside the Cabinet

The heart of The Whatnot Cabinet is a duality: finding the right item for your cabinet and taking it at the right time.

All found objects begin in “The Outdoors”, the shared tableau of pieces that players can select from. Each of the 5 actions interacts with The Outdoors in slightly different ways but they all share the same characteristics: drawing tiles from the supply bag, adding some or all of those tiles to The Outdoors, then placing 2 tiles into your personal cabinet. Be mindful of your choice as it not only determines the way in which you select tiles for your cabinet but also sets up turn order for the following round. The player closest to the left side of the Journey Board at the beginning of the next round goes first.

The Anatomy of a Curio Tile

I’ve talked a lot about how to get tiles into your cabinet but now let’s talk about the tiles themselves and what you’re trying to accomplish. Like any good collector you’re trying to make your cabinet as unique as possible while still showcasing your artistic side. This leads to one of the primary challenges of the game. The five main object types (leaves, crystals, bottles, shells, and animals) each come in a combination of five colors (red, yellow, green, blue, and purple). The top left corner of each tile displays a banner showing both the color and icon with the artwork also matching the color scheme; the bottom right corner on some tiles will show a crown. 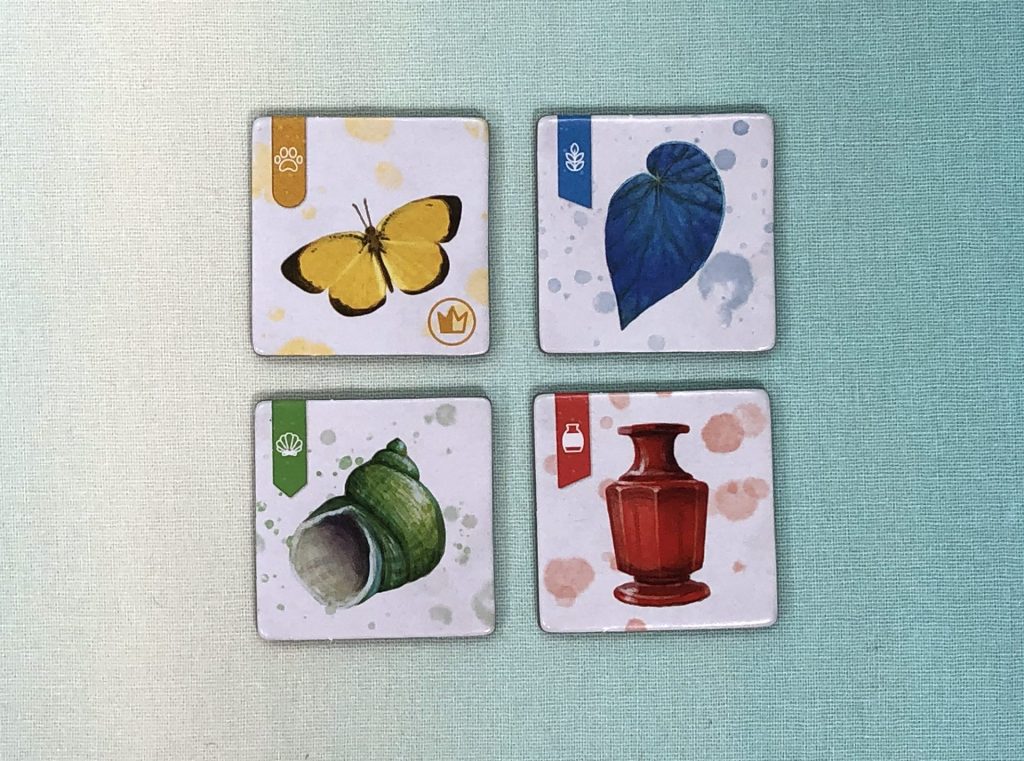 Placing Tiles in Your Cabinet

The largest segment of your points will come from being able to complete rows and columns in your cabinet and being able to place just the right tile can mean the difference between victory and defeat.

Columns are scored by either having four items of the same color (4 points) or by having four differently-colored items (2 points). In either case the type of object is not relevant. 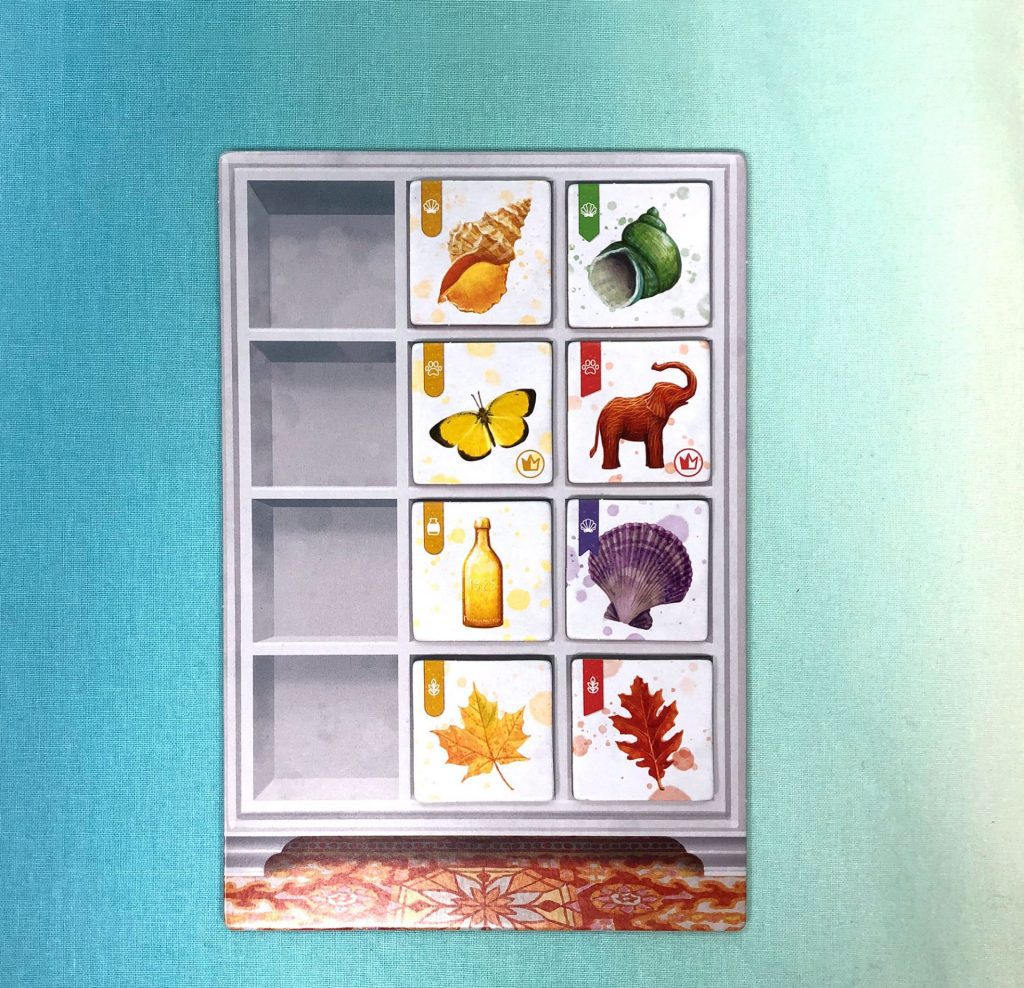 Rows are scored by either having three of the same type of object (3 points) or by having three objects of different types (1 point). In either case the color of an object is not relevant. 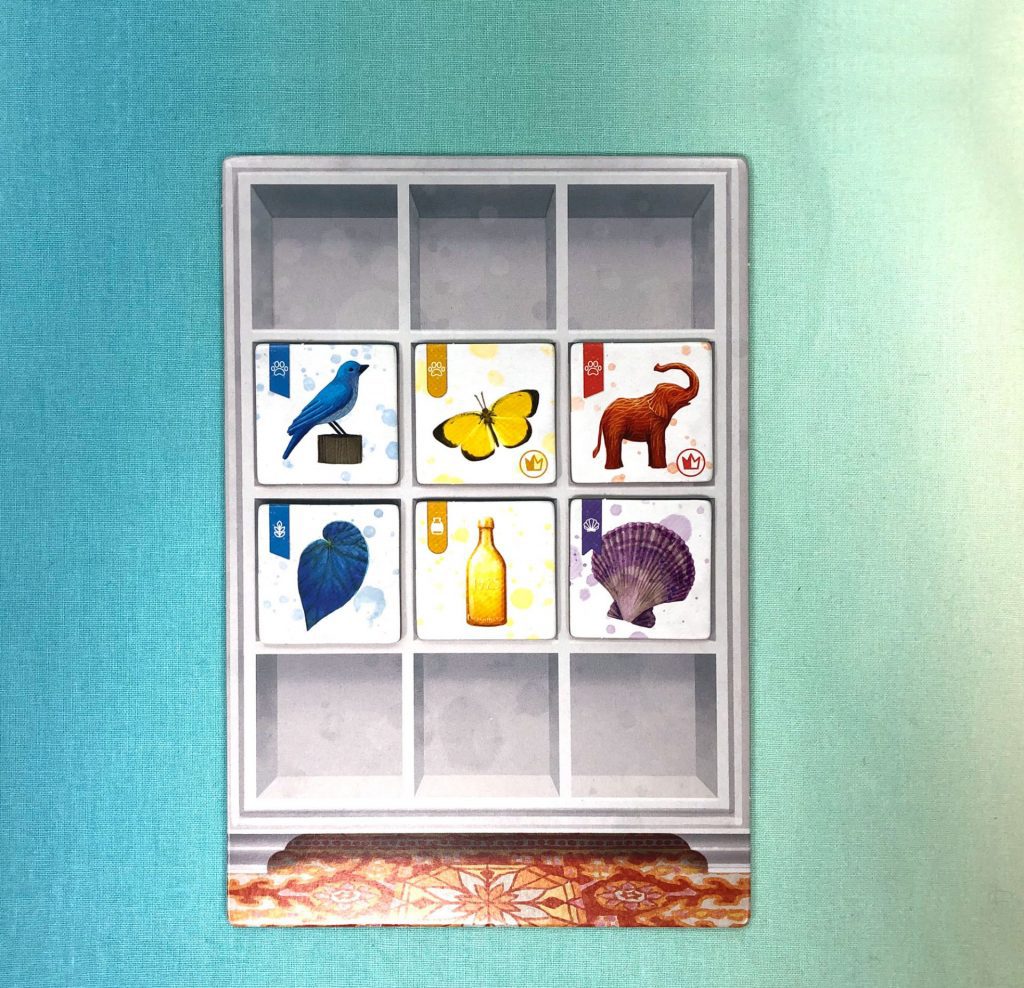 In addition to the points you’ll earn from placing tiles along the way, The Whatnot Cabinet also rewards you for unique and interesting placement choices.

At the beginning of the game players will shuffle the blue-backed Curiosity deck and lay out five random cards. Potential options are: placing four of the same type of object anywhere on your board, placing a different type of object in each row, or being the first to complete a row and a column. The first player to complete a Curiosity card claims it for their own and places it near their cabinet. Each Curiosity card is worth one or two points and players can claim multiple cards. 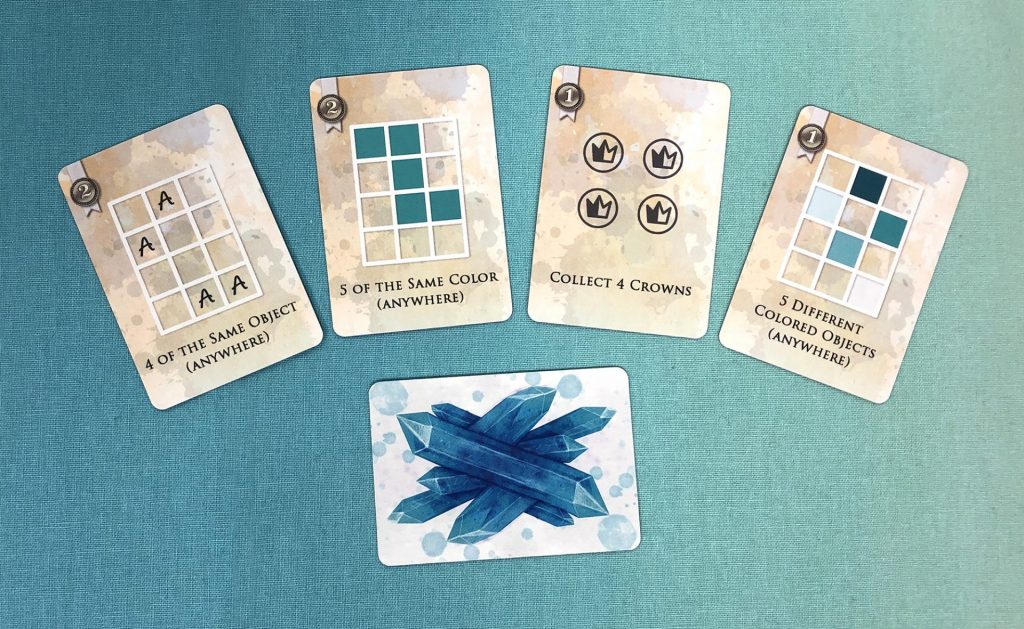 In addition to selecting random Curiosity cards, players will also lay out a single random face-up card from the purple-backed Wonder deck, which contains a card for each object type. At the end of the game players will receive an extra point for each tile of that type they’ve placed in their cabinet.

A 3 or 4 player game lasts 6 rounds while a 2 player game lasts just 3 rounds (each player takes two actions per round). The game ends when all players have filled their cabinet at which time players tally points received from completed rows and columns, Curiosity cards, and special action tiles, as well as bonus points for Wonder cards, any tiles which display a crown in the lower right corner, and players whose piece(s) finish the game on one of the first 3 spaces on the Journey Board.

The player with the most points is the winner. 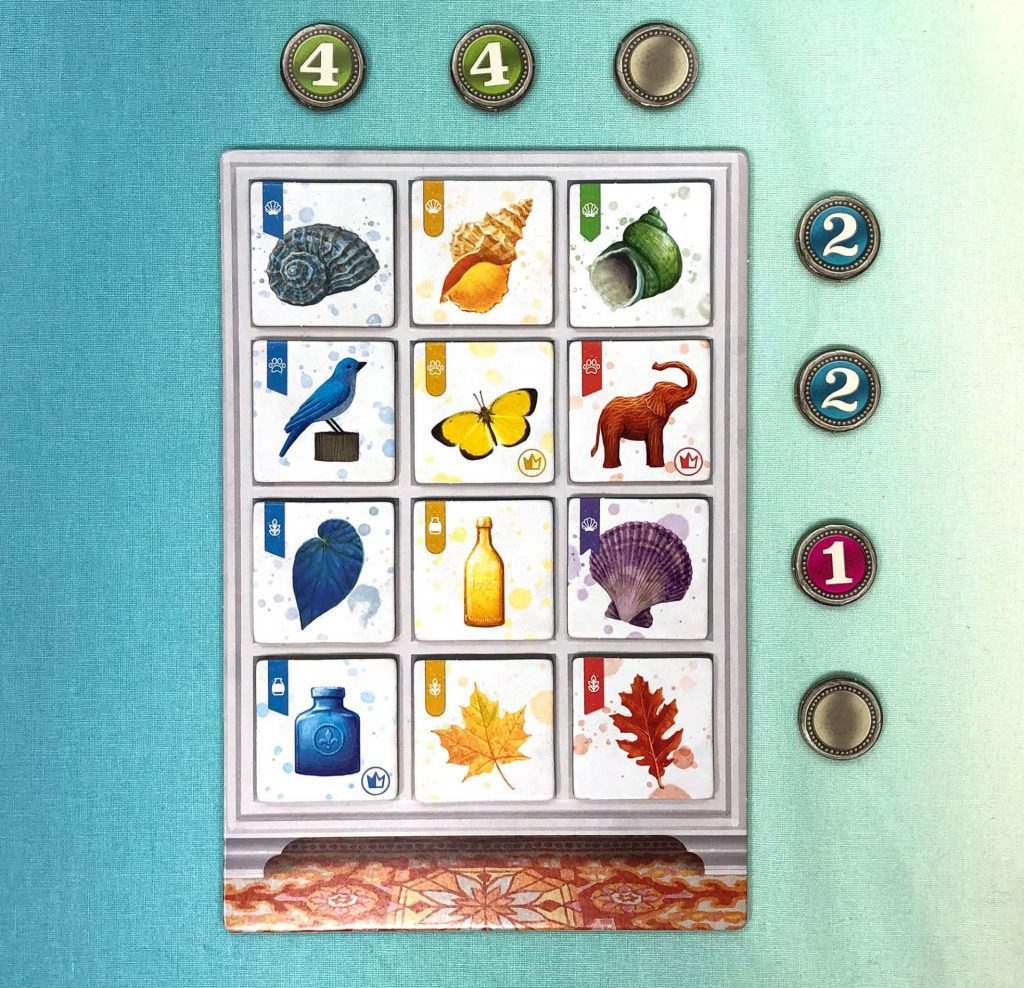 Final Thoughts about The Whatnot Cabinet

Set collection is one of my favorite sorts of games. Looking for that perfect card, tile, or resource piece gives me a thrill of internal delight. That’s one of the reasons I was looking forward to The Whatnot Cabinet so much. The other games from this design team have a similar theme: in Herbaceous you’re trying to collect herbs from your garden, while in Sunset Over Water you’re trying to collect vistas for your paintings.

Everything about The Whatnot Cabinet speaks my language: the gameplay, the gorgeous artwork from artists Beth Sobel and Kim Robinson, a unique theme from designer Steve Finn, and the top-notch production that I’ve come to expect from Ed Baraf and Pencil First Games. Imagine my disappointment when this one initially fell a bit flat for me. Let me explain.

The Whatnot Cabinet is a good game: it plays smoothly, it’s light and breezy, and it’s a delight to look at, but for me it felt very mechanical. As mentioned previously all of the actions do the same basic thing: pull some tiles from the bag, put some tiles in The Outdoors, and place some tiles on your board. The only real difference is what tiles happen to show up when you make your choice. 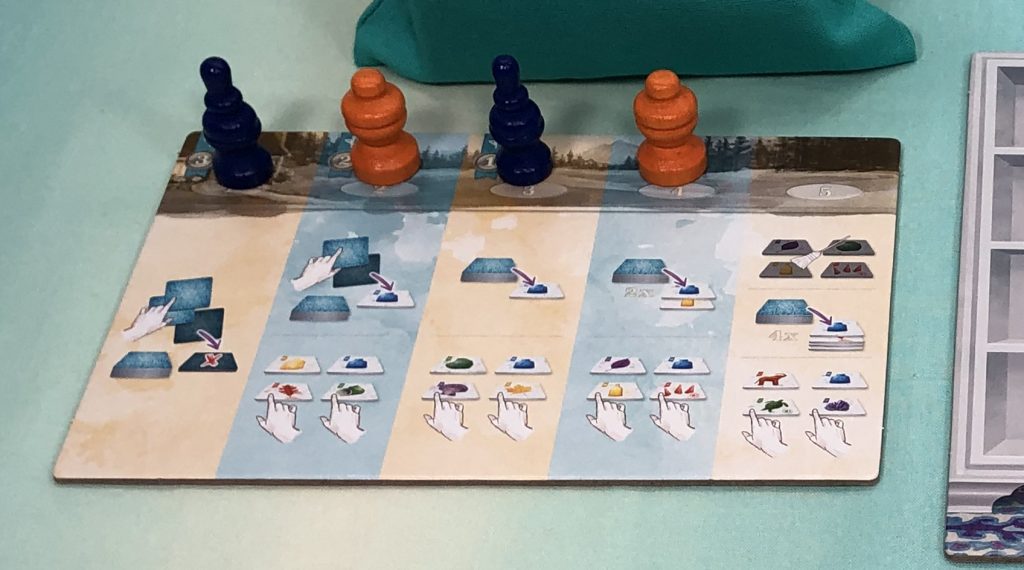 In fact the actions were so similar that I constantly had to refer to the player help sheet to remind myself of the exact steps for each action. From left to right on the action board your choices are:

As you can see the actions are extremely similar, and you’ll need to play the game a few times to understand when to use them. Action 1 and 5 are pretty different, but the differences between actions 2-4 are very subtle; primarily focused on what you might leave for your opponent. I think they could have two like that, and another different one. Perhaps the designer could include an action that was a bit different to make the actions feel more varied. For example the card drafting game Sushi Go! has a “chopsticks” card which allows you to postpone picking a card by waiting for the next turn.

In its defense, The Whatnot Cabinet offers some nifty choices for scoring. I like the tension between the desire to place objects of specific colors to get column bonuses while fighting to grab that specific shell so as to get a row bonus. Scoring in general is tight: in the games I played scores ranged from as low as 13 to as high as 33, so even a few points could make the difference. You’re paying attention to rows and columns, trying to score the variable Curiosity cards, picking up crown tiles, and also trying to place tiles that match the Wonder cards; it’s a nice mental challenge. And because cabinet boards are public knowledge, there’s always the chance that your opponents will claim a tile that you need just to keep it out of your hands. Since there’s only space for 12 tiles your opponent will most likely pick that tile because it benefits them and not just because it would have helped you; the game is just too tight to choose otherwise…but you can’t ignore the possibility either.

Another plus is that the production quality of even this “prototype” is astonishing. Pencil First Games continues to punch above their weight class by offering vacuum-formed inserts, thick tiles, and near-finished artwork. In fact the last “prototype copy” (The One Hundred Torii) we received from them was nearly indistinguishable from retail — and surely the same will be said for The Whatnot Cabinet. That shows their commitment to quality and to you, the person buying their games. If you’re looking for a high quality product then look no further than any of the Pencil First Games lineup.

While The Whatnot Cabinet isn’t my favorite release from the Pencil First Games crew, I think it still might just find a place on your shelf. 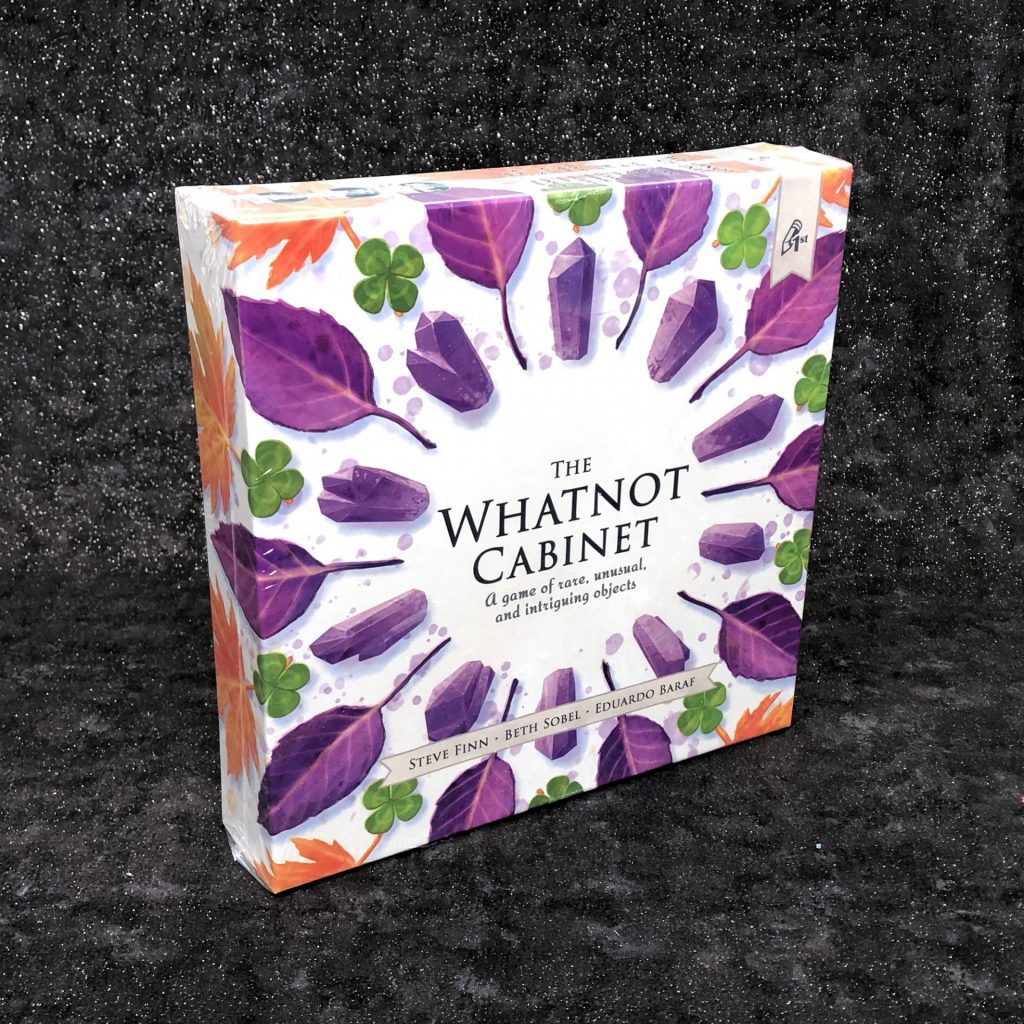 The Whatnot Cabinet details

Medieval Academy Review – A Squire of the Realm