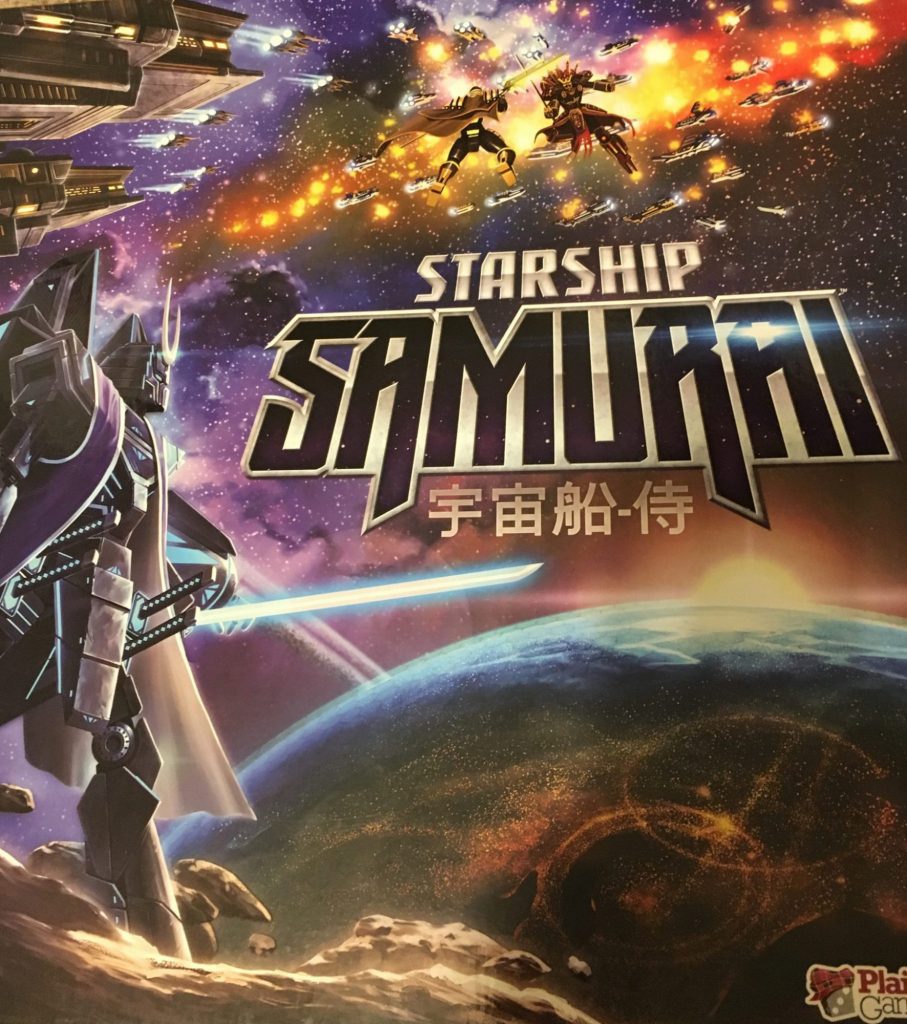 Let’s start with a review of how Starship Samurai is played just so we are all on the same page. If you know that already you can skip this section ( I promise it won’t hurt my feelings).

Starship Samurai is an area control game of sorts for 2-4 players. Each player takes on the role of a powerful intergalactic “clan” vying for greater control of the galaxy.  To do this you will need to gain the trust and loyalty of the smaller clans to expand your influence. So it is time to set off with your mechs and warships to expand your territory (because nothing makes friends faster than a big army). Starship Samurai is played over a series of rounds where each player attempts to gain the most force at various locations by the end of the round. Whoever (has the most force  in a territory at the round end wins that territory and its bonus. These bonuses typically increase a certain clan’s loyalty but can also give victory points (honor) or wealth. Clan loyalty works like a tug of war with each granting higher end of round bonuses depending on how loyal they are.

A Round and a Round We Go 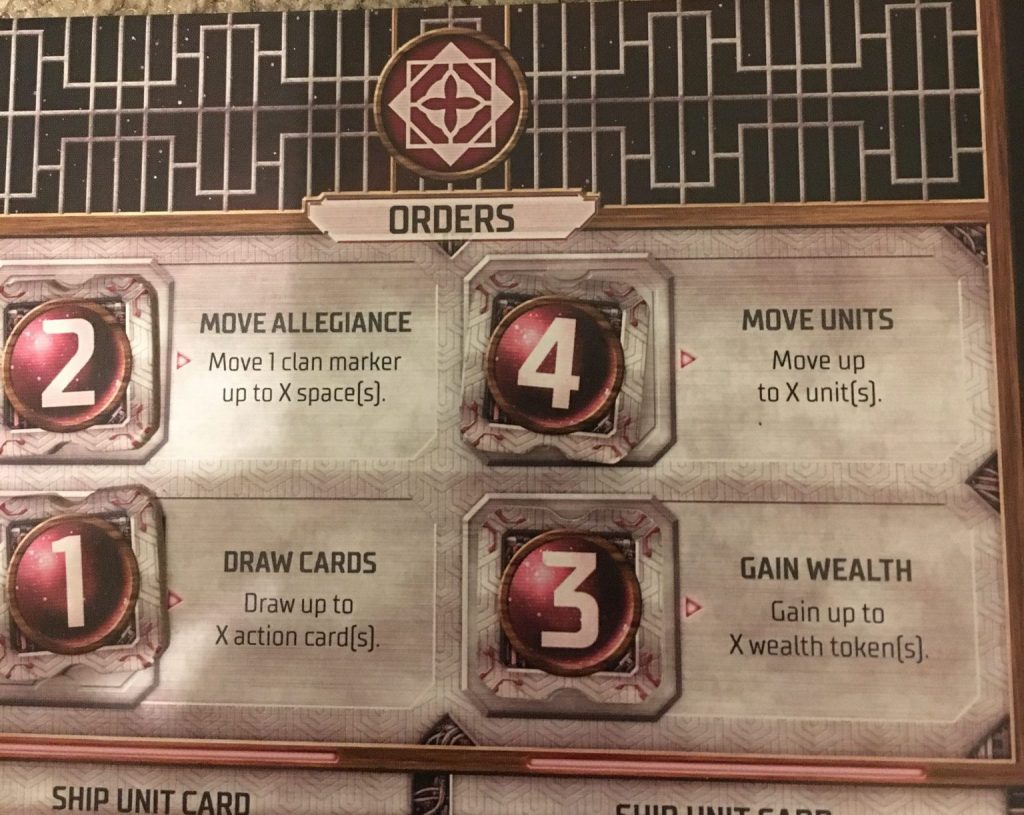 A round is comprised of four turns for each player. Each clan has numbered tiles from 1-4.  Each turn you will select a number and choose to perform one of the four possible actions in the game.  You can, gain wealth, draw action cards, move units or directly adjust a certain clans standing on the board.  The number selected tells you how powerful that action will be. For instance you could play a three and then move up to three units or choose a one and gain one wealth.  The number you choose will impact the value of the turn you take so it is important to use the right action with the right power number to maximize your plays. These number can be increased by spending wealth but overall you are working with 1-4 per turn. 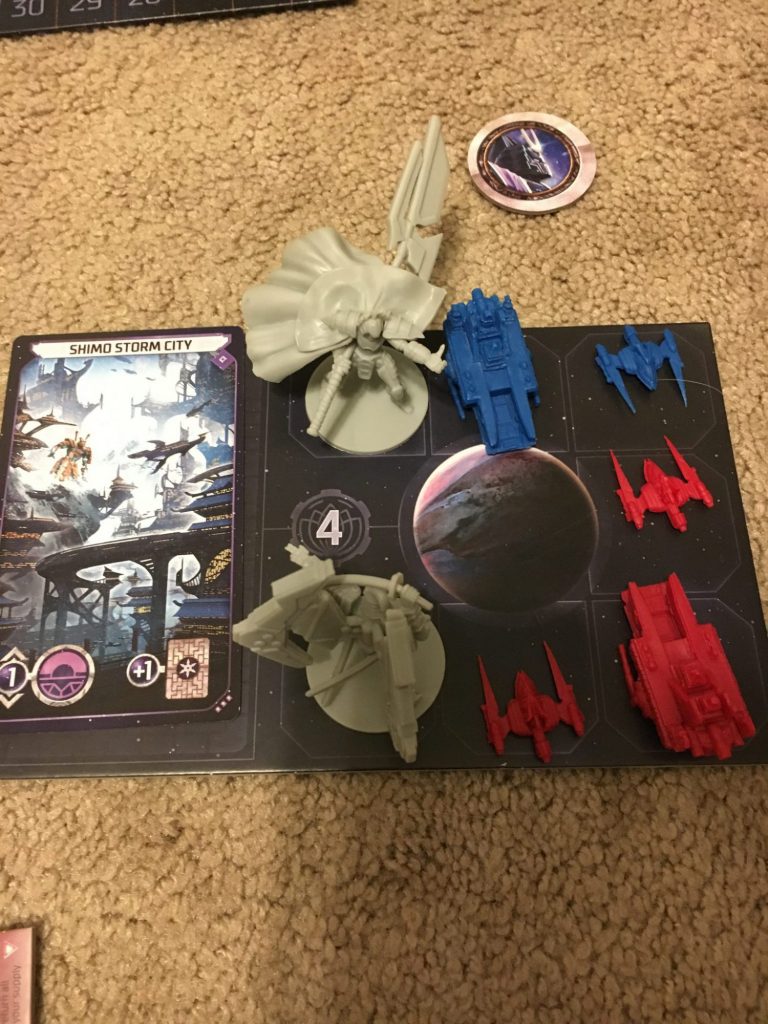 Once all the actions have been made the turn concludes.  Players involved in battle now may play one battle action card (kind of like Bloodrage) and then calculate final force in each region based on units and cards.  The winner claims his location and units while any losing units may stay on the board. This creates a healthy balance of power that keeps anyone from snowballing too much in terms of board presence.  Each unit has its own special abilities that keep combat light but still immersive as your have to calculate for your opponents skills and cards. 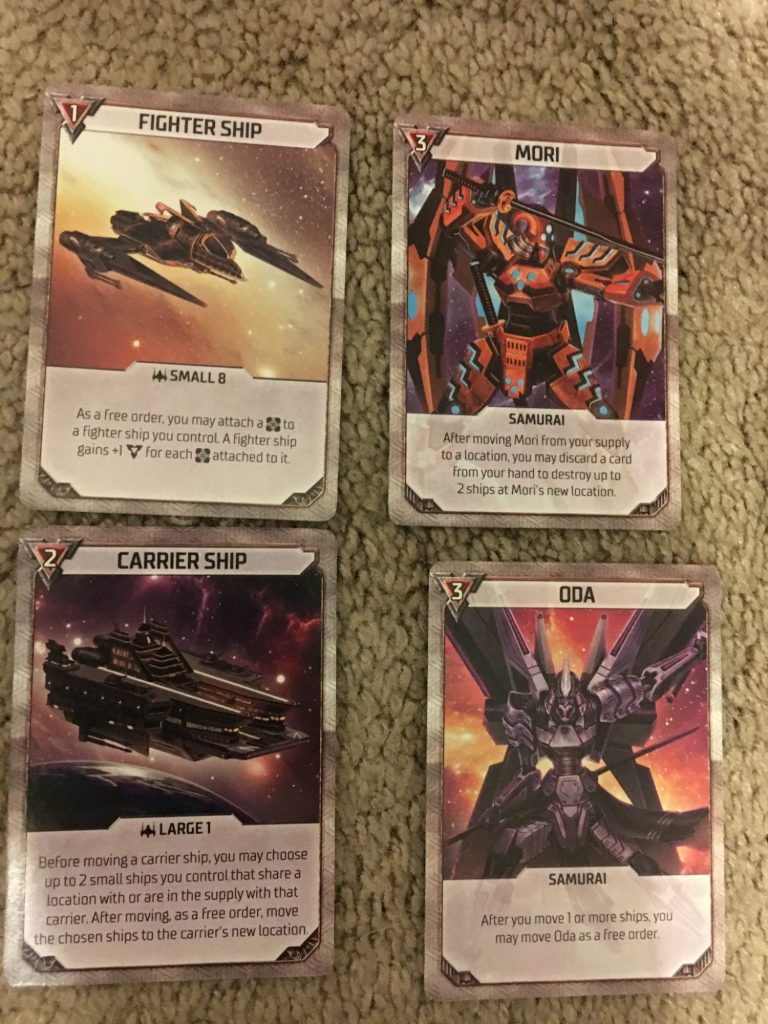 Action cards are an important aspect of the game as they give you unique options in both your orders and battles.  Action cards are broken into two types, order and battle.  Once per turn you can play a order action card before or after you initiate one of your four orders.  Battle cards are played, usually face down before a battle and do all sorts of trickery.  These cards always have a cost but the reward is quite worth it.  Successfully utilizing your cards is key to victory. 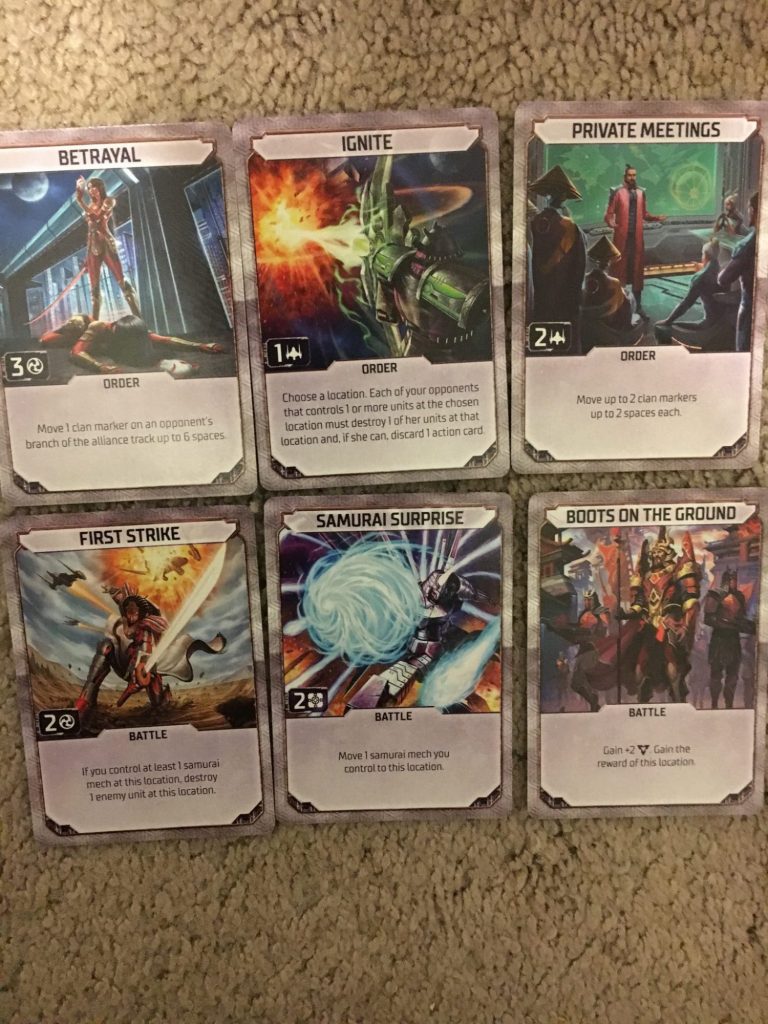 The action cards provide a great deal of variety in the game and provide the bulk of the “flavor” and treachery in the game.  I really enjoy the way they affect every aspect of the game and always have a give and take involved.

Once all locations have been collected in this manner, you tally up any end game bonuses and whoever has the most honor wins and is the galactic overlords.

Starship Samurai is a nice and enjoyable game that brings a lot of nice aspects of the area control genre together into one nice package.  I will say often I felt the games were a bit long for what it was and often reduced the amount of total locations being fought over but always enjoyed my time with this game. 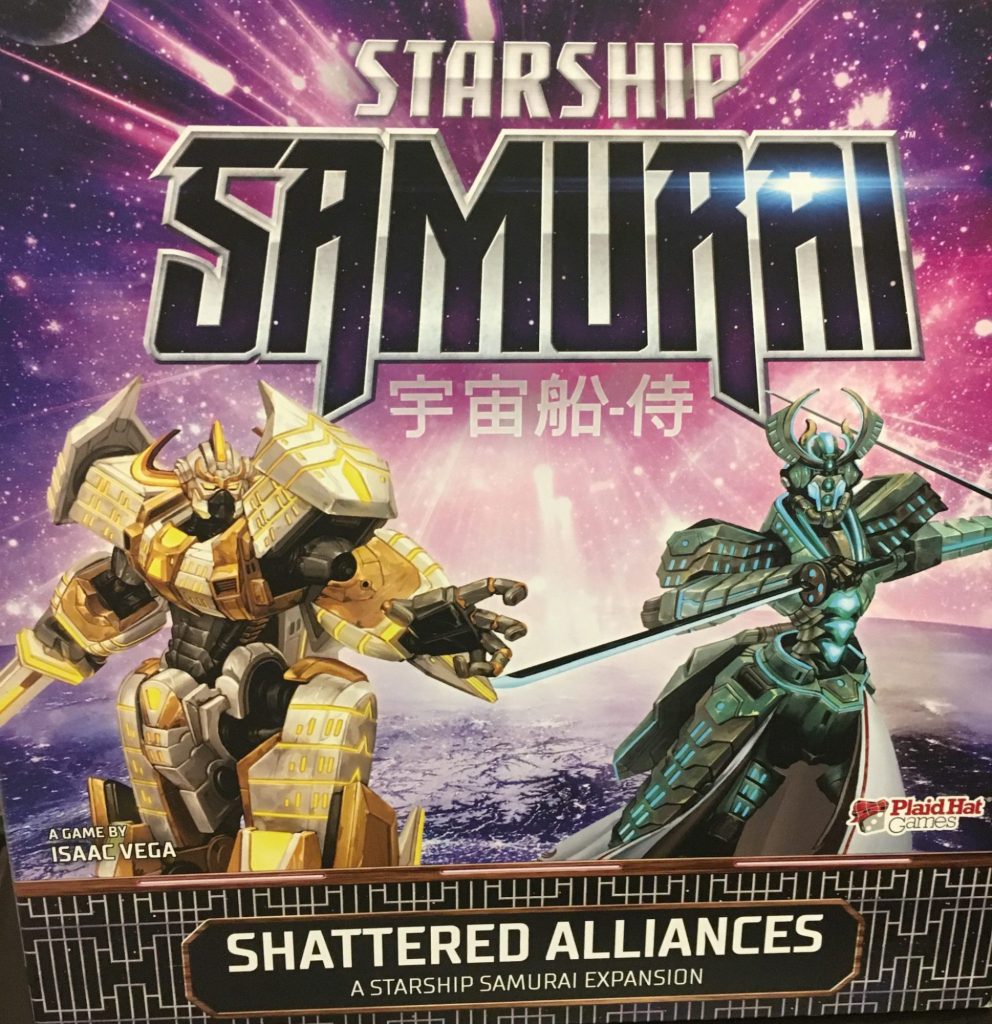 On to the Expansion

Now let’s talk about what you came here to read about.  Shattered Alliances brings some fresh additions to the original game but admittedly less than the box would lead you to believe.  Shattered Alliances introduces a whole new deck of action cards and two new mechs for some much needed variety to the base game. While the mechs are great and I love the new abilities, the action cards are the stand out in my opinion. These cards really up the player interaction and elevate the interplay of the game outside of just combat. 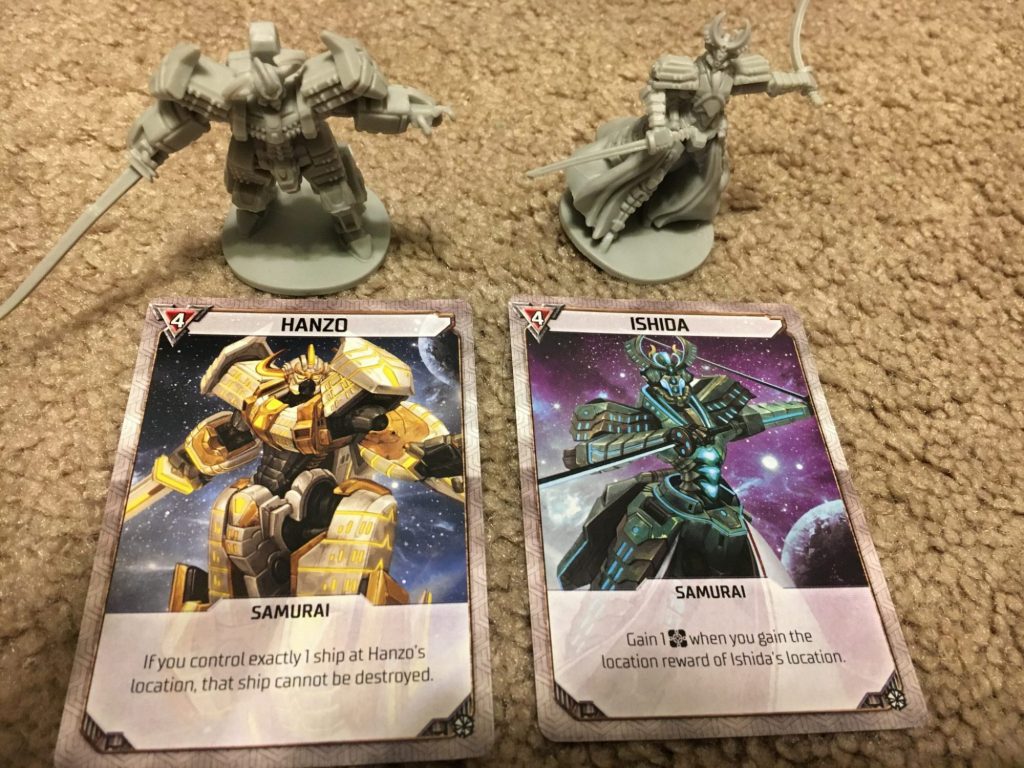 You have a few options when integrating the new cards. You can play with the new deck separately, add them all together or, my personal favorite, give each player a pre-allocated “deck” of their own to acquire cards from. 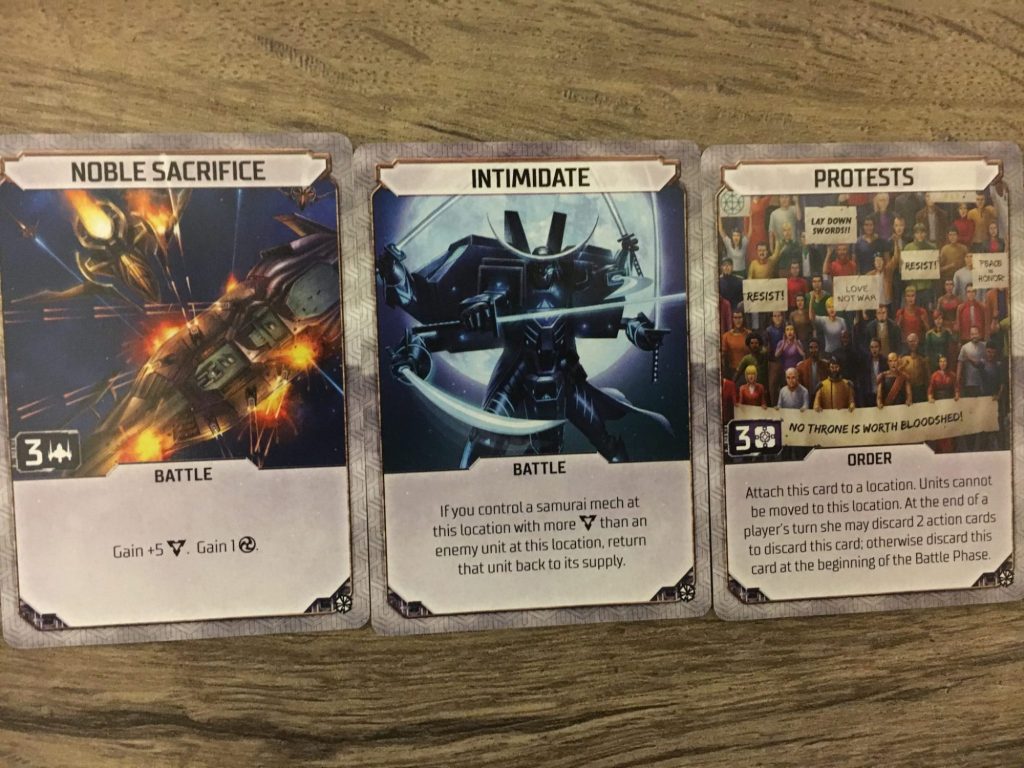 The cards did give Starship Samurai a good boost in the right direction with some much needed variety from the traditional action cards but overall I would have loved to see even more from this expansion. There are so many easy and great options that could be added (asymmetric faction powers, a political “system” using wealth) I was hoping to see more integrated to shake things up.  All this to say the expansion is a wonderful addition to the game but it is more like a lukewarm coffee than the shot of adrenaline I was hoping for. If you love Starship Samurai you will want this expansion in your collection, just know that Plaid Hat did not reinvent the warp dive when they put this expansion out on the market.