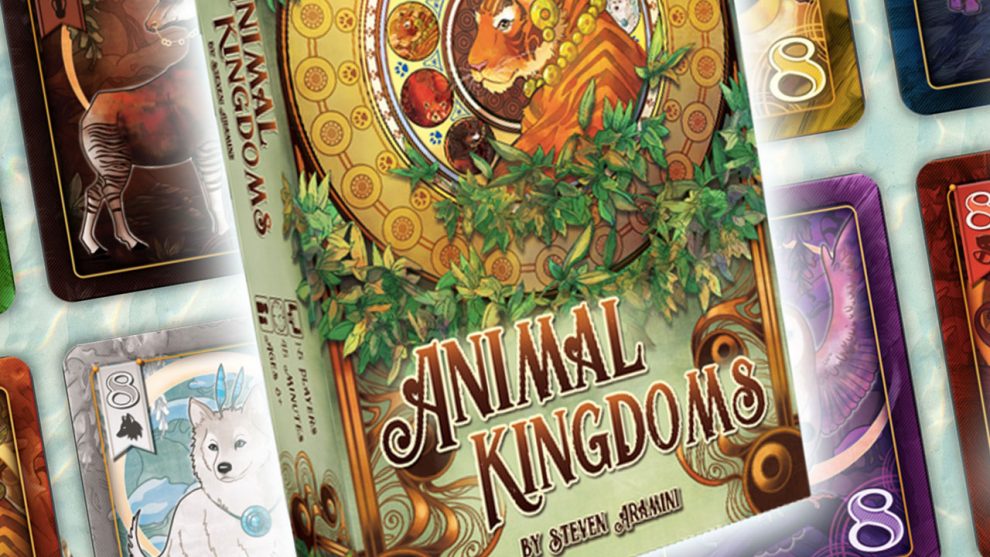 Tyler Williams
Add Comment
Check out our review of Animal Kingdoms to see how you can reign supreme in this twist on area control.

Get Ready for your Coronation

The time is almost at hand! Your hard work has paid off and you shall soon be declared ruler of the joint regions of the Animal Kingdoms. There are only a few usurpers who would dare challenge your rule – but no matter. You must gain a majority of loyal followers in the regions to sway popular opinion in your favor and then it shall be you at the top of the food chain. Your opponents won’t know what hit them.

Welcome to the Jungle 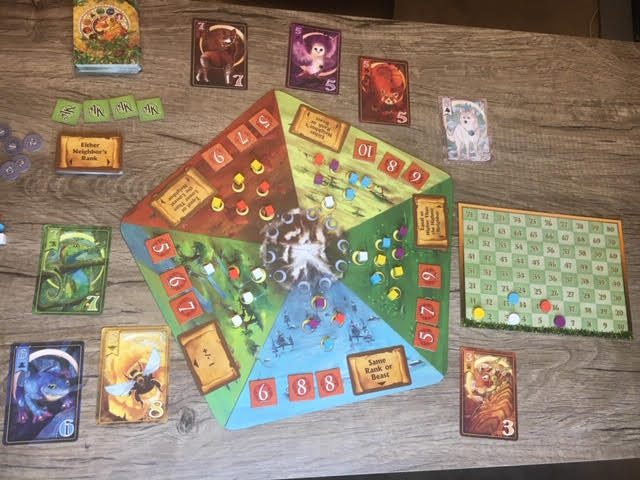 Animal Kingdoms is an area control game for 1-5 players that pits you in a battle to control the various regions of the kingdom to win over the animals and become the next ruler. You gain popularity by maintaining the majority of presence in each of the five regions through three phases of play. At the end of the third phase the player with the most popularity points wins the game. The depth of Animal Kingdoms comes from how you gain presence in each region. Each player has a hand of four numbered cards ranging from 1-8 and containing one of several animal types. To gain presence in a region, you must play a card there. But each region has a decree that dictates the type of cards that are allowed to be played there. In order to be successful at winning a majority in a region and scoring its points, you will need to manipulate your hand most effectively to maximize your presence on the board. 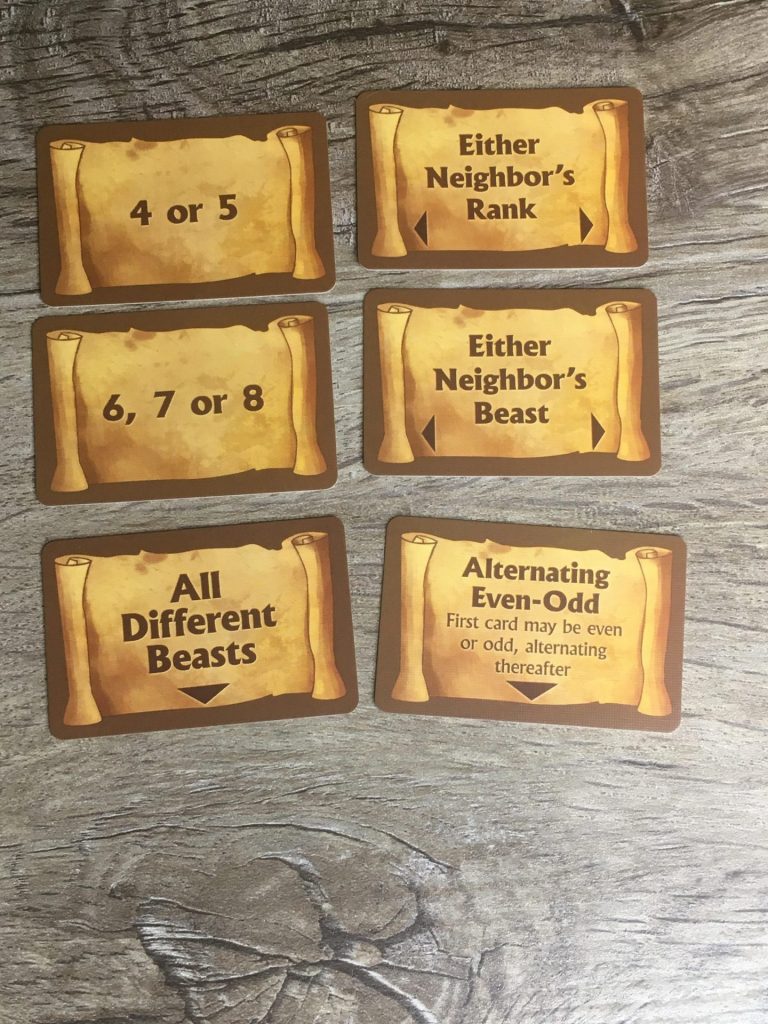 Each era of play in Animal Kingdoms moves quickly but offers players a few important choices. As noted before, players always maintain a hand size of four cards, using them to meet a region’s decree requirements and gain the left-most, active popularity point value in that given region. These values increase from age to age. Decrees give players a number of requirements needed for placing in a region such as adjusting the numeric value or animal type that is allowed on cards played. On each turn a player may play a card that meets a region decree and place one unit of influence there (as long as there is an open space). If your hand seems subpar you can choose instead to rally by discarding any cards from your hand, drawing back up to four cards, and gaining one popularity point. 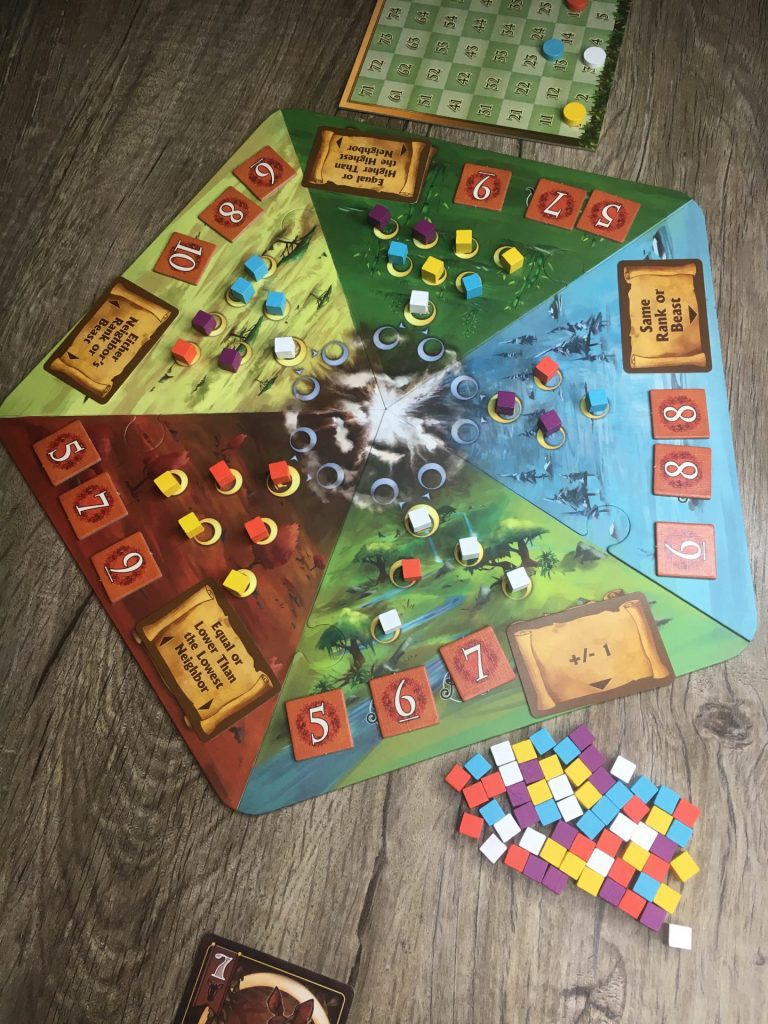 The last strategic element to Animal Kingdoms is placing an influence unit in a Capital City. Each region has a larger, shinier space at the top called the Capital City. If a player places a unit there they will have to “withdraw” which is in essence passing for the age. Players who withdraw are unable to place additional units anywhere on the board and must wait for the next age to begin to play additional units. The advantage of placing in the capital is that their unit will move into a council space above the city. Units in council spaces remain there for the duration of the game instead of being returned to the player at the end of the round as with other units.

The first player to withdraw will also get a green bonus point tile for scoring at the end of the game. There is a distinct advantage to planning your moves and trying to withdraw first to gain those coveted bonus points.

The End of an Era

Once all players have withdrawn, you start dolling out points based on who had the most presence (units) in each region. Whoever had the most will receive the printed value that is leftmost in that region; second place receives three points and third receives one. If there is a tie in control, it is broken with a duel. Tied players select and play a card from their hand. The highest value will win the tie and the winning player discards their card, gaining the higher amount of points. The other player keeps their card but will score fewer (or no points) depending on what position was being dueled over. 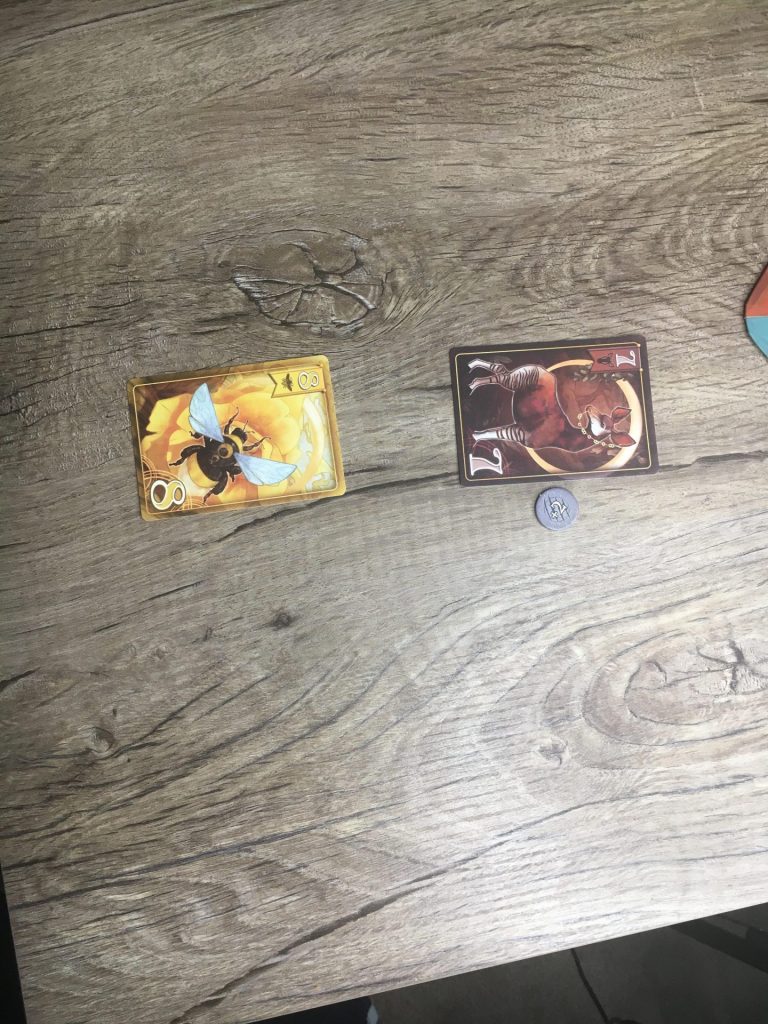 It is important to note here that the cards range from 1-8 but a one will beat an eight on a duel, which adds a very small but appreciated layer of strategy to what you play in this phase since no card is unbeatable. Also, any player who loses in a duel will receive a plus two token that can be used in future duels to raise the value of their card by two or be kept until the end of the game to be scored for one point each. 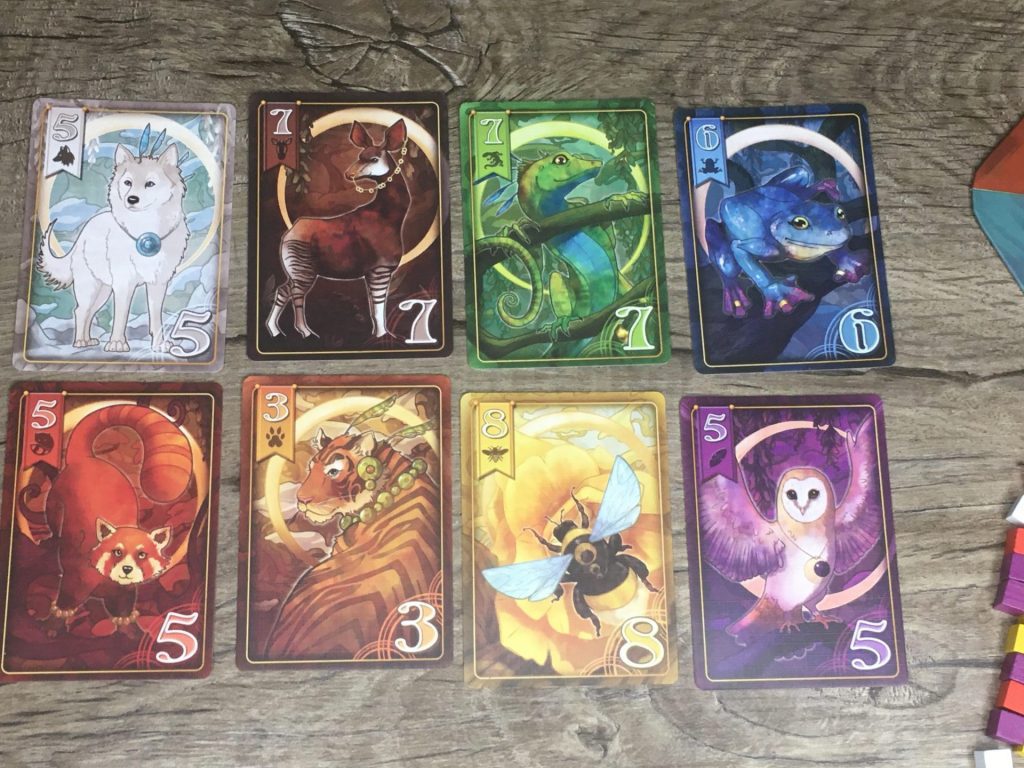 Once points are awarded, players will remove the leftmost point indicator, move any units in Capital Cities up to a council space, remove any “normal” units in regions — returning them to players — and remove and place new decrees in each region. After three rounds, whoever has the highest total points will be crowned ruler of the Animal Kingdoms. Long may they reign! 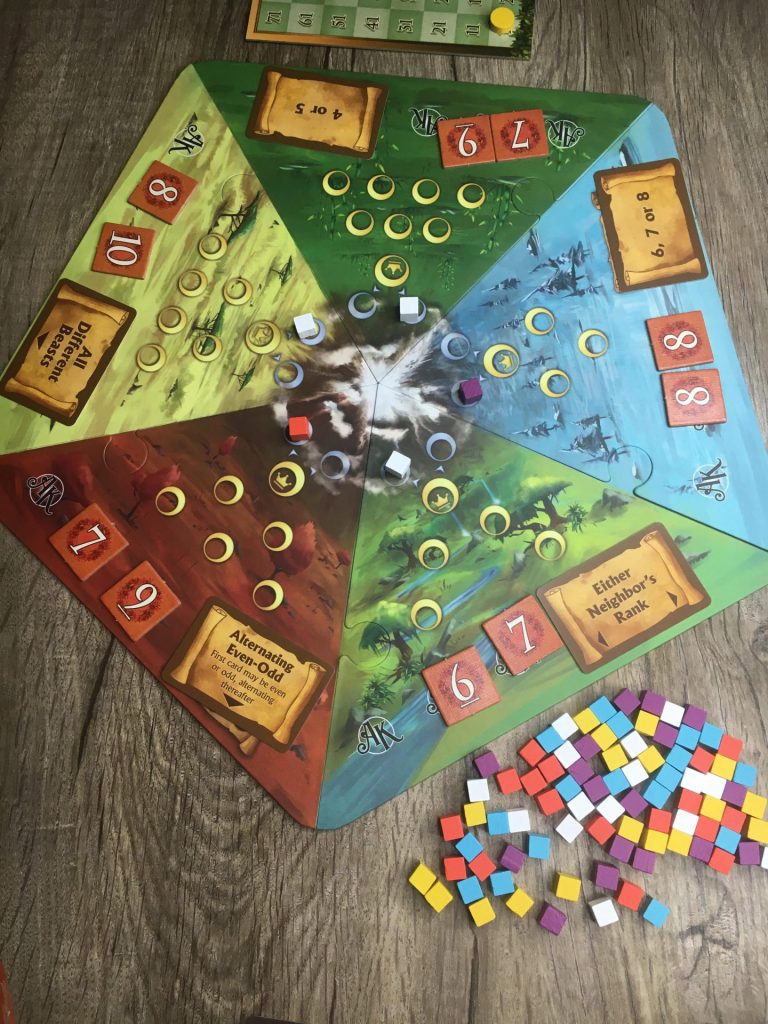 Animal Kingdoms is a fun, fast-paced area control game that utilizes card play in an inventive way. I really enjoy area control titles in general but I found this take on the genre refreshing. There are some huge pros that I noted with Animal Kingdoms. It is a breeze to teach and I found it plays in under an hour with 4 players, which is a nice change of pace for area control. Even with the timeframe on the light side, I did not feel “on rails” or that there was not a need to strategize. The choice about how to stagger and plan your card placement was very engaging. I was often attempting (and failing) to plan three or four moves ahead to maximize my actions. The addition of the duels and the Capital Cities add a very small but appreciated layer of depth and strategy to Animal Kingdoms that I believe really elevates the title and gives it more replayability. The art on the cards by Michael Cofer, Danny Devine, Katy Grierson, and Jeff Wallace is beautiful and engaging and some of the decrees are really thought-provoking. 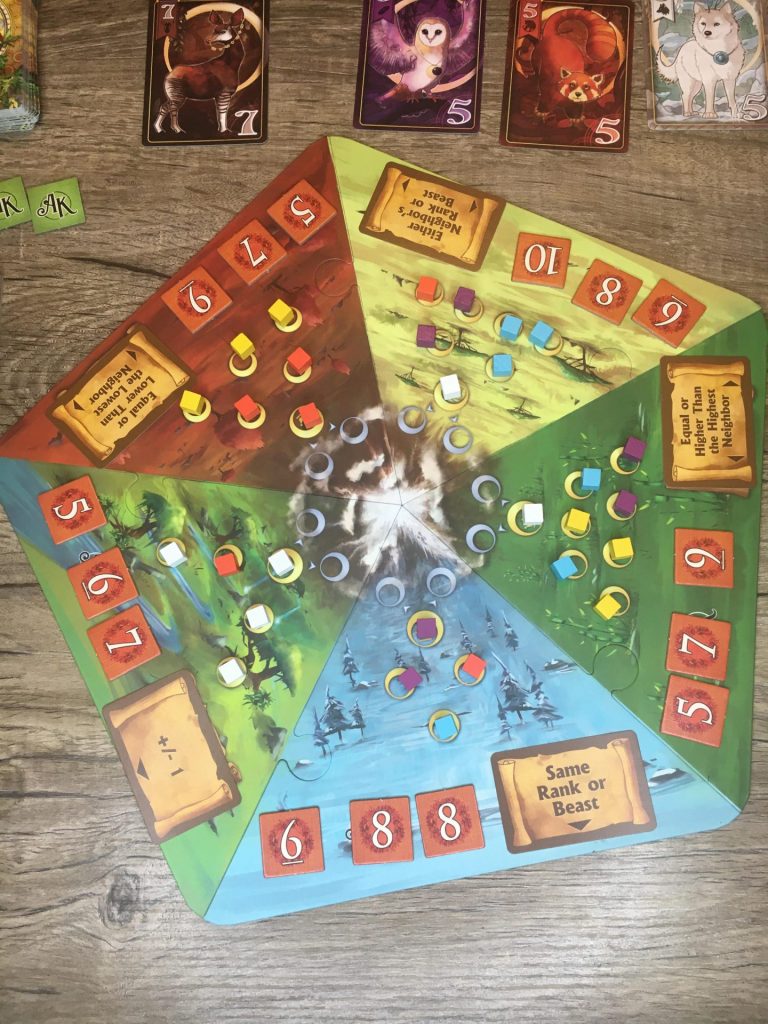 It is worth noting that when people hear “area control” they may think of big titles like Rising Sun, Cthulhu Wars or Twilight Imperium. While I love all of those games, it is easy to think that area control equates to a grandiose 6-hour table hog. Animal Kingdoms is not that type of game and really distills down the true heart of area control to its basic elements, utilizing them in a fresh new way. I appreciated this but I can see where a gamer may be expecting a heavier lift here than Animal Kingdoms brings to bear. To that end, you could argue there is limited replayability — even with the duels and Capital Cities — since player interactions are certainly streamlined when compared to larger board games of the same genre. Nonetheless, I found the lighter, quicker experience gave me my area control fix and is a breath of fresh air. I thoroughly enjoyed my playthroughs of Animal Kingdoms and I feel you will too!

If you are looking for an area control game that you can be confident your whole gaming group can learn and engage in, Animal Kingdoms is one you should check out. With beautiful art and exciting gameplay, you will not be disappointed. 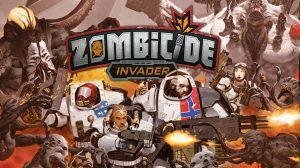 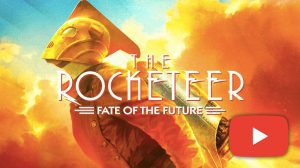 The Rocketeer: Fate of the Future Game Video Review

Join Tyler as he soars through the clouds in his video review of The Rocketeer: Fate of the Future from Funko Games. 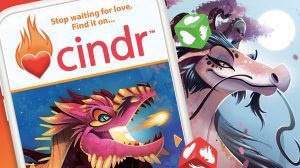 Check out our Cindr review to see how things heat up when you date dragons.