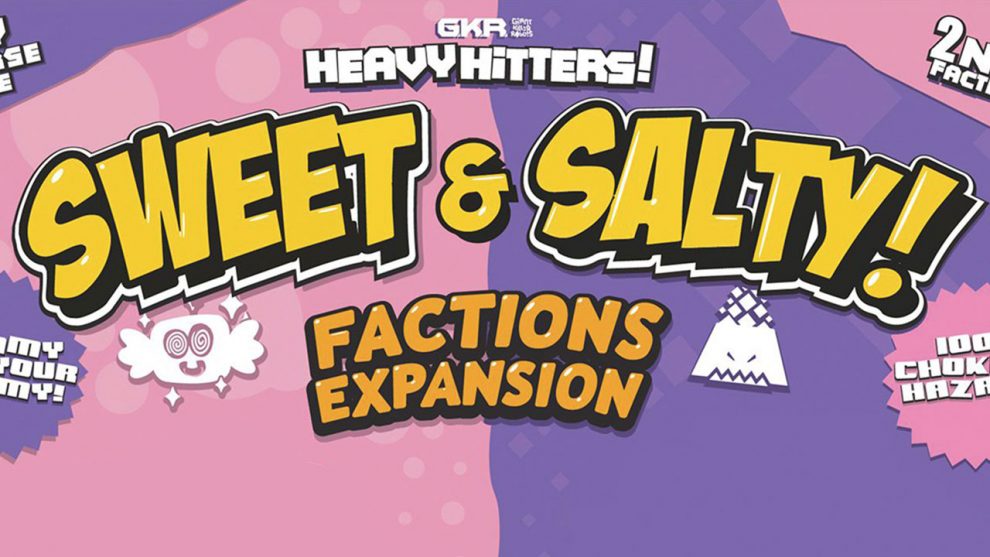 Tyler Williams
Add Comment
Sweet and Salty - two great tastes that taste great together! Read our review of the Sweet and Salty expansion for GKR Heavy Hitters and get more of the same great thing.

A Rainbow of Destructive Options

Welcome back contestants and viewers alike!  Its everyone’s favorite wasteland giant robot game show.  You may be familiar with the four initial sponsor companies that have been wrecking, tagging and advertising their way to glory for some time now in the arena, but today we have a special treat.  Due to GKR’s great popularity and success, two new companies have decided to join the fray. This means new mechs and lots of new destruction to go around. Now, sit back, enjoy the apocalypse, and don’t forget to drink Hapsi! 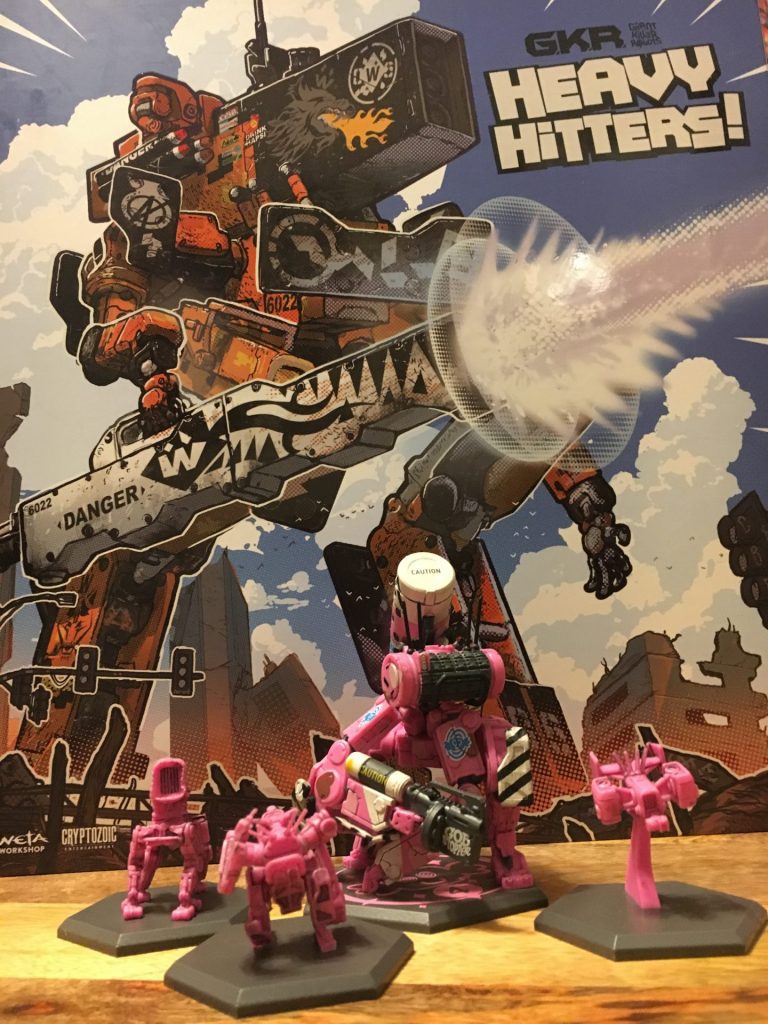 GKR is set in the far distant (or perhaps not?) future where an unforeseen apocalypse has occurred with many of mankind’s biggest cities have been abandoned. All that remains of society comes under the unchecked control of the big corporations.GKR Heavy Hitters Sweet and Salty expansion adds to the beautiful and beloved main title by adding two new sponsored mech units for players to choose from. 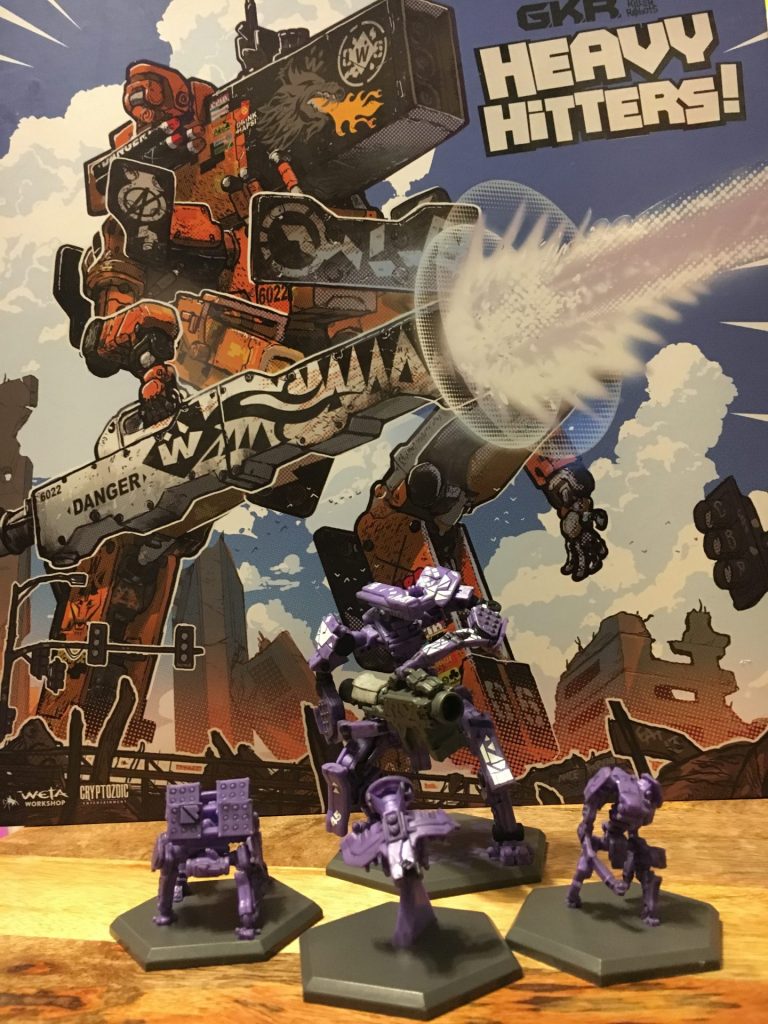 But not everything is bad in the apocalypse; to keep people distracted from the horrendous living conditions and corruption of leadership, the corporate overlords devised a “game show” where company-sponsored “mechs” battle to destroy and tag buildings with advertising in the old ruins of mankind’s cities.  This kills three birds with one stone, great advertising, a way to keep the placid masses entertained and a great way to clear these cities to rebuild into more factory space for each corps favorite product. Read our review of GKR Heavy Hitters for the full scoop.

This sets the stage for the Sweet and Salty expansion which introduces two unique new company mechs;ach of which comes with an asymmetric deck of combat cards.  Let’s dive in and discuss the two new units and what they bring to the battlefield. 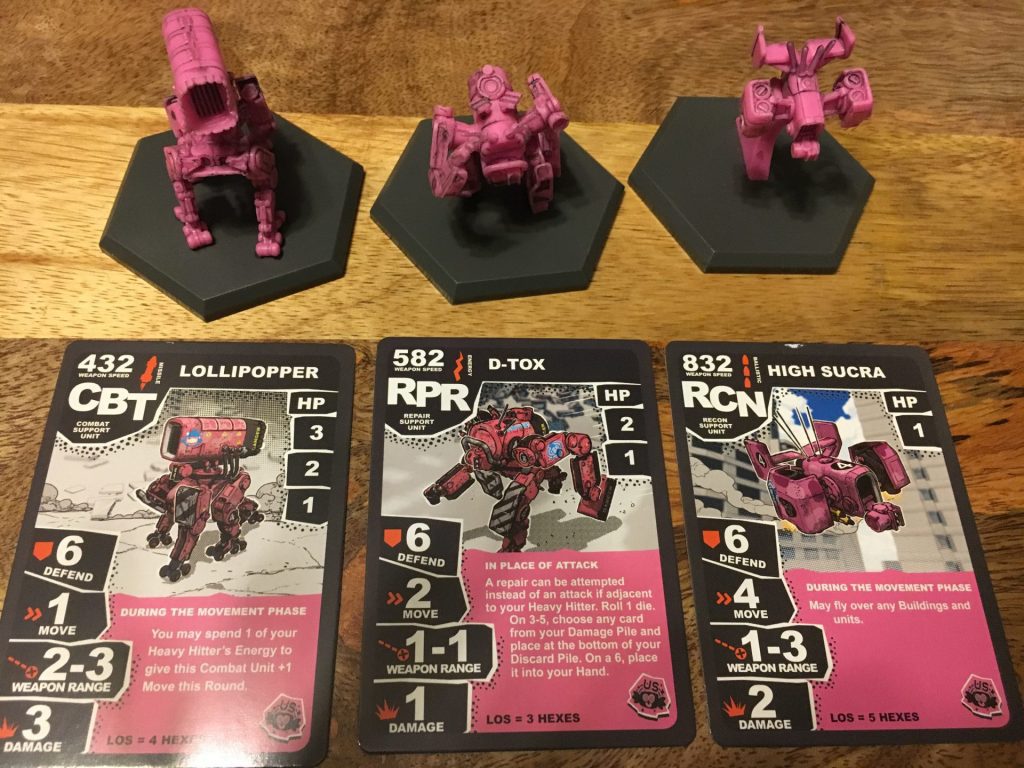 The Ultra Sweet corporation pulled out all the gobstoppers when they put their mech into the arena.  “Sweety” boasts an impressive assortment of primary and secondary weapons that deal a nice pinch of damage.  The stand out style of this mech is several abilities to “double-up” on achievements gained from ally shots and extra damage to support units.  This mech also possesses a unique attack ability category called artillery. This attack does not require line of sight on an enemy but does up the dice number required to hit.  This “blind fire” ability give you some really fun playstyle options to force people to come to you while you set up for a nice, doubly beneficial, ally shot. This deliciously, deceptively mean mech is bound to give you cavities if you let them set up shop somewhere on the map. 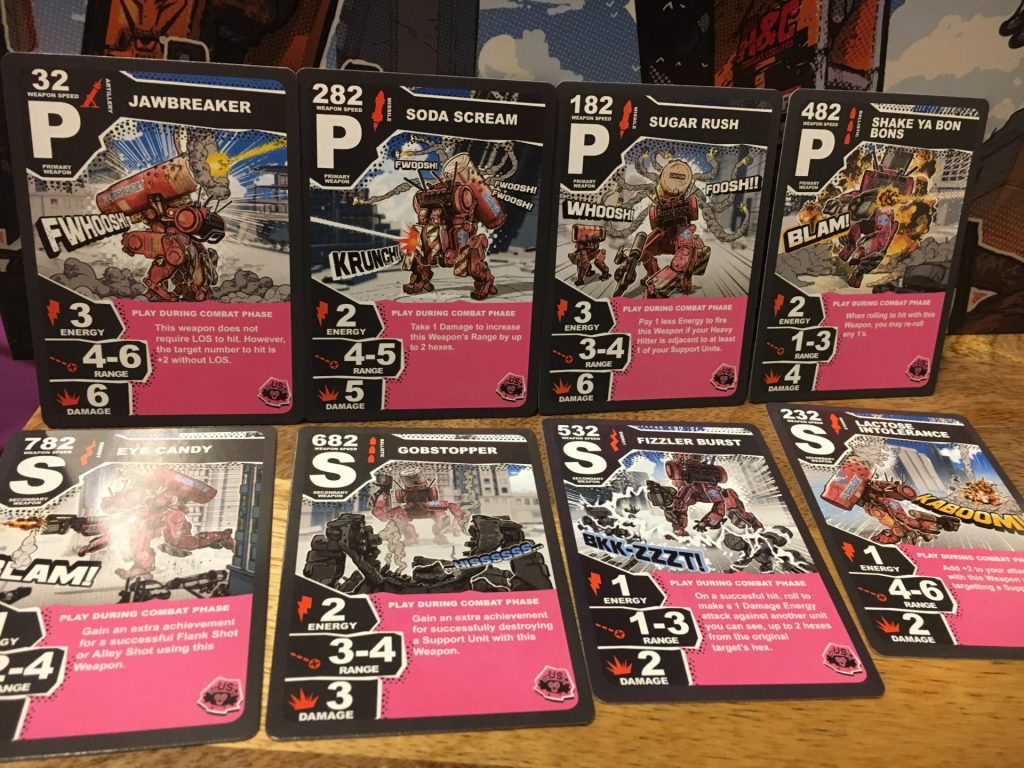 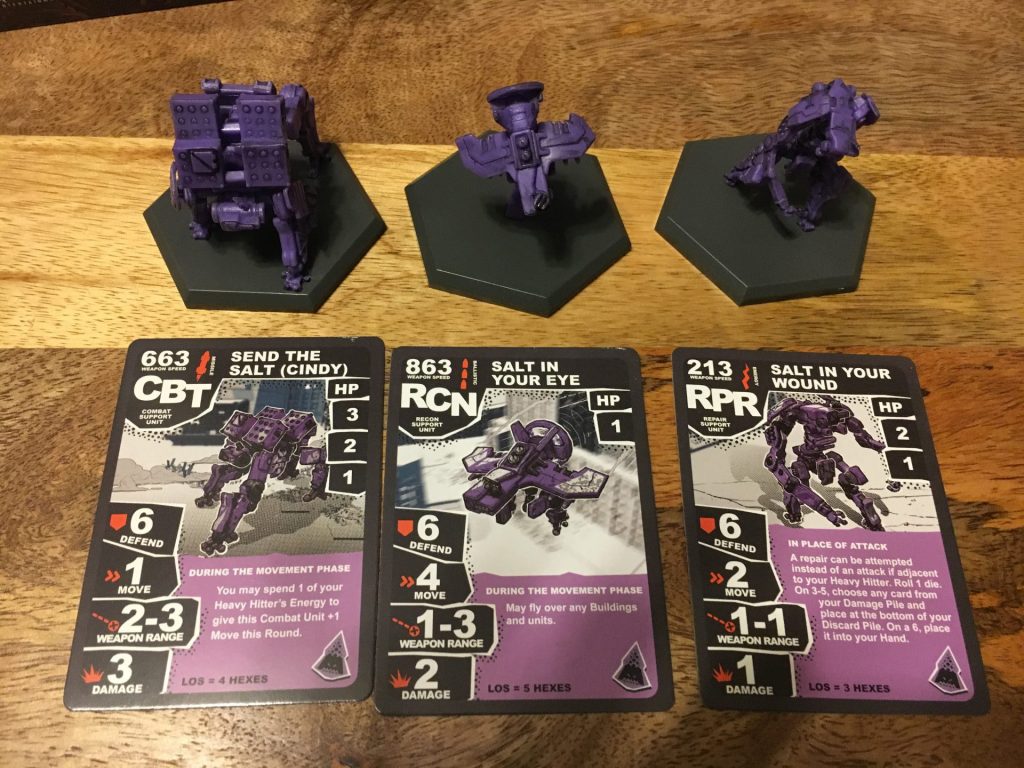 The Seriously Salty corporation is not about to be outdone by some silly candy factory. They bring with them a nasty bag of tricks that will leave you more salty than they are.  Some of the stand out features of this mech’s play style is a “failsafe” mechanic that deals explosion damage to surrounding units, even if you miss! There is even an attack that targets buildings and hits units around the building.  This allows you to nail that annoying sweet mech hiding on the other side without needing to play into that aforementioned ally shot strategy. The best card in the salty arsenal to me is an attack that, when it connects, allows you to rotate the mech you hit by 180 degrees.  This can cause all KINDS of maham from opening up that mech to follow up flank shots from you or other mechs but this is not even the worst outcome. It is possible to change the direction of the mech before they are able to launch their attacks. This can be devastating if an enemy has no backup plan when you hit them with your attack, properly titled, “you mad bro?” 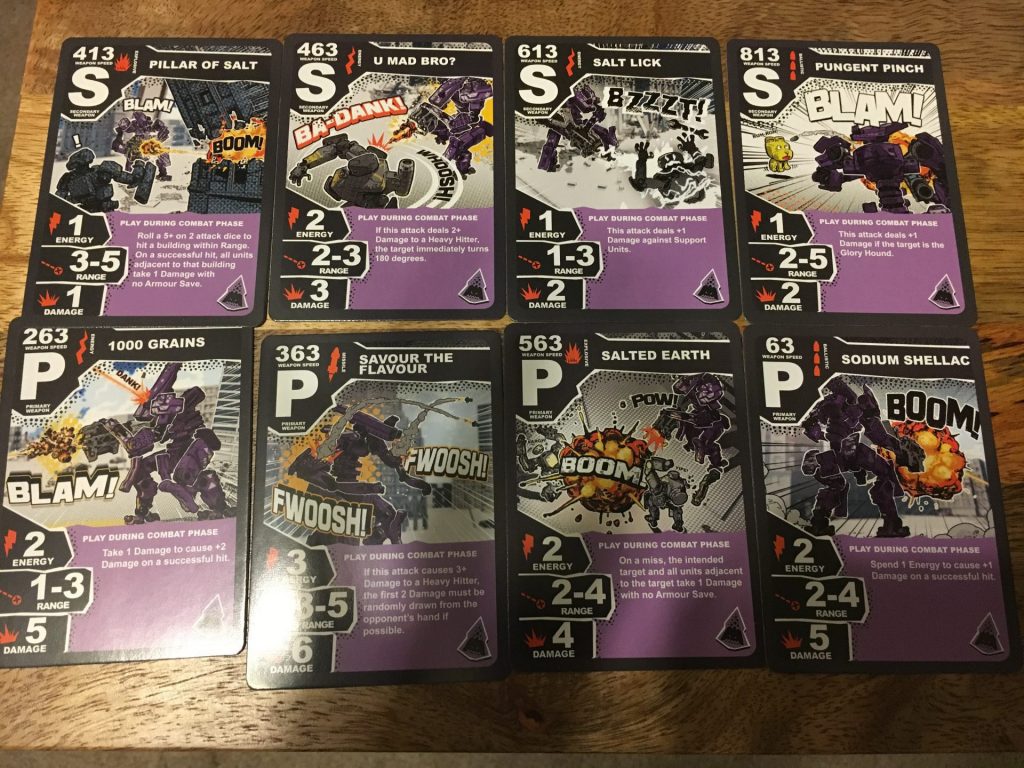 A Trail Mix Expansion (get it cause sweet and salty?)

Both of these mechs add a lot of variety and asymmetry to Heavy Hitters which is always a welcome addition to any game. The new corporations feel similar but truly stand out from the original four. I was excited to see how different matchups would fare and really enjoyed watching the interactions between different mechs and their support units. I felt as though this expansion focused a lot on positioning improvements and a lot of support unit hate which I welcomed. Previous factions had some support damage but with these new mechs, you were almost incentivized to hit supports which was a nice touch to add a bit more tension to the support positioning game.

All of this to say, I was very pleased with this addition and truly hope this gets enough traction for Wetta to pump out further faction add ons for this wonderful game.  If you have the core game, you need to check these new factions out! If you are on the fence about the game as a whole or the expansion due to “replayability” or cost, I hope you will be encouraged to check this great game out. You won’t be disappointed.  Give Heavy Hitters a try, and don’t forget to drink Hapsi! 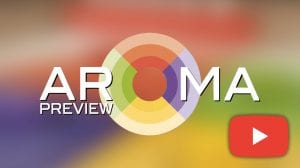 Check out our first look at Aroma a new game by Organic Aromas. 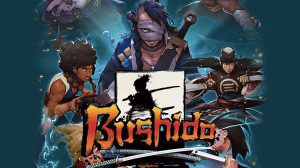 Check out our review of Bushido by Grey Fox Games to see if this title has what it takes to rise above the rest. 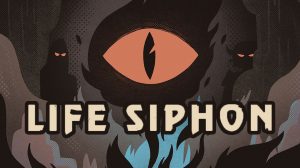 Read our Life Siphon review to see why this combat strategy game of summoning and spells sucks….but in a good way. 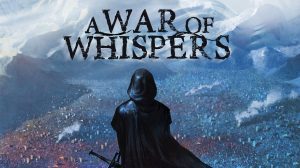