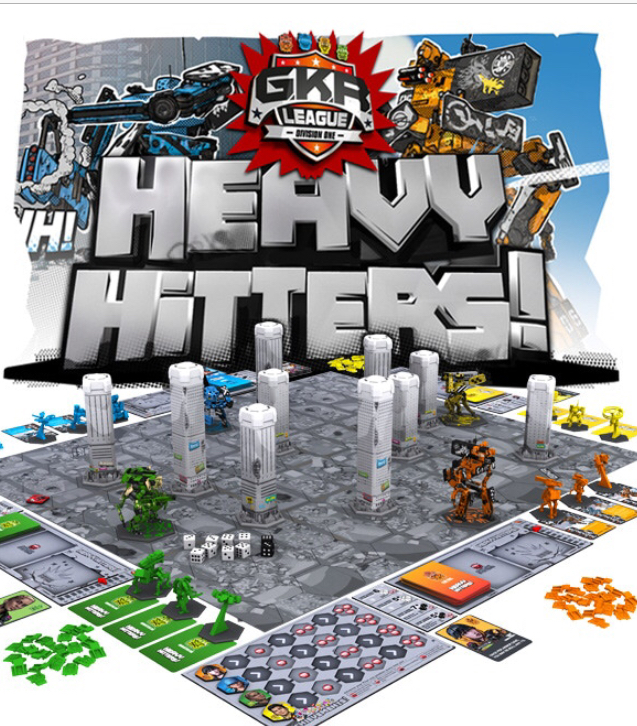 Do you like wargames but hate the buy in cost and insane number of rules you have to keep track of? Have you always wondered what it would be like if the mechs from games like metal gear solid decided to play Splatoon? Let me introduce you to Heavy Hitters, a fun, digestible mash up of what I love about light deck building customization along with the tactical fun of wargaming.

Heavy Hitters is an amazing offering from the geniuses at Weta Workshop, the special effects company behind Lord of the Rings, Avatar, Mad Max: Fury Road, and Blade Runner: 2049. Heavy Hitters is an intense battlefield tactics and area control game with a beautiful table presence that does not take itself too seriously. It has a light theme that always makes me think of a setting if the movies Idiocracy and Pacific Rim had a love child.

The general idea is that you are professional “athletes” piloting giant mechs, competing for sponsorships and fame, on behalf of different mega corporations. You do this by damaging your opponent’s mechs but mainly by tagging the dilapidated structures around the battlefield with your sponsors specific logo on “holo billboards.” If you manage to tag all the sides of a structure with your logo, the building can get destroyed bringing you one step closer to victory. 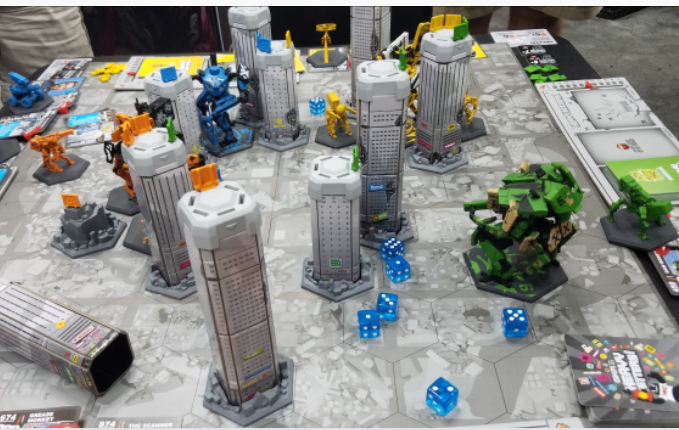 Your Chaos, Your Way.

One of the things I love most about this game is the deck building aspect that happens in the pregame set up. At the start of the game players select a faction with a unique heavy hitter and faction deck. From that deck you must select 25 cards which comprise your battle deck for the game.

There are several types of cards you can chose to add to your deck. There are weapon cards that are broken into primary and secondary with a variety of options at your disposal. Next are response cards that allow you to respond to attacks or quickly reposition your mech on the battlefield.  Finally we have deploy cards that allow you to bring out one of your three smaller support units to the map. Each of these types of cards are very important and can bring value to your deck but it is essential that you find balance between them. You do not want to find your hand full of deploy cards when you need a weapon, or have all your guns out but no cards to respond to other players attacks.

Your deck plays two roles as it allows you to make most of your important actions in the game but it also functions as your health. As you take damage or over use your energy gauge for attacks or movement you will have to lose cards to represent the “systems” that are shutting down. Players are able to choose which cards to discard from their hand. So make sure to manage your hand properly or you may have to draw from the top of your deck with potentially disastrous results. 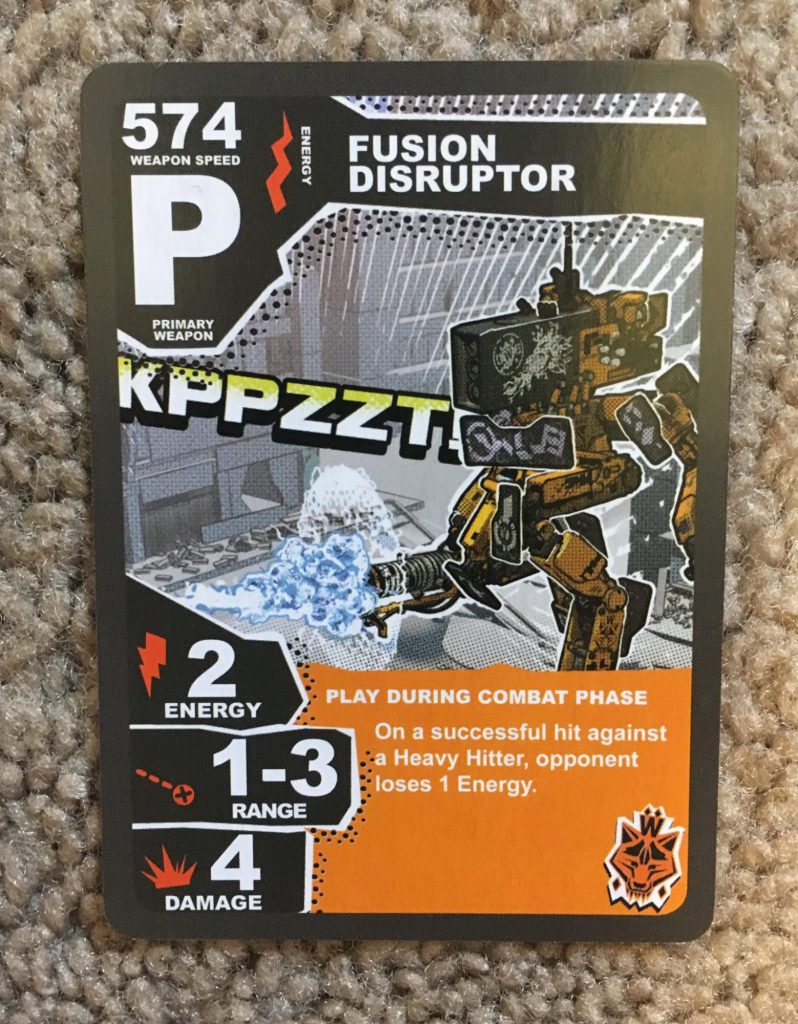 “Don’t waste all your energy moving or you won’t have enough to fire the LAZAR!”

GKR Heavy Hitters is played over series of rounds that flow very well together. There is an initial setup and placement phase then there is movement, combat, and tagging. Movement and combat all pull from your very limited stores of  energy. You can use 5 energy before you take damage and a max of 10 in any one round. It is very key to victory that you position your units well to take advantage of the terrain so that you can set up for big hits in combat. While doing this, you must be careful to conserve energy or you will run down your deck yourself depleting your life and tactical options in the process.  This balancing act of seeking advantageous positioning while attempting to conserve energy can put you in some fight or flight delimas which attest to the quality of the design and care that crafted Heavy Hitters.

Now to the good stuff!

The combat system in Heavy Hitters is a delightful. You can utilize various weapons to take advantage of your positioning to damage opponents. Each card has several key stats. Energy used to fire, range and damage along with weapon type (either bullet, missile or laser) and lastly weapon speed. I do not want to give away all the surprises of the game but the most intriguing aspect of the game I have found is the weapon speed options for this game.

Unlike common war games with standard unit speeds, Heavy Hitters uses each individual weapon speed to determine who goes in what order. This creates a glorious bit of chaos if you desperately wanted to go first but your pesky neighbor busted out his quickest weapon to beat you to the punch. There are advantages to going first and last in this game. I have witnessed a player attempt to heal himself with a repair robot only to find he took no damage until after his unit had already went. This system is innovative and provides a nice layer of thinking that keeps your on your toes throughout your skirmish.

Combat uses dice to determine successful hits based on a small number of factors. I was unsure about this in the game as often luck can be a dastardly thing in close games and I was doubtful how “fun” it would be to track what I needed to roll each and every time I wanted to hit something but I was pleasantly surprised. The system is very basic and really seems to be there more to allow for the defender to have a chance to dodge more than to mess up your epic damage attack. Also, there is a handy cheat sheet provided to make it simple to keep track of what roll is needed.

Combat is more about slowing your opponent’s down than directly destroying them.  While the GKR stands for “Giant Killer Robots” it seems these robots would rather promote than kills as you can only win through combat if you are the last unit left which is much harder than simply tagging buildings…I often found there were even options that allowed you to tag building during combat which was delightfully devious.

Who wants to play TAG?

After combat is the short but ohhhh so sweet tagging phase of the game that wraps up the round. In this phase you get to tag one side of building that each of your units is next to. In this round you get to draw one special sponsor card for each building you tagged. These powerful cards act as a “second hand” of cards that can help you turn the tables on the competition in a big way. Also, whoever tagged the most buildings can become the glory hound which along with a few other fancy feats is key to upgrading your Giant Killer Robot by gaining more fans. This will allow you to perform better in combat and hopefully crush the competition.Heavy Hitters is great about throwing you into the action fast while offering you meaningful, tactical decisions right out of the gate.

GKR Heavy is a fast paced, easy to learn, forgiving and light-hearted shoot em up that scratches that wargaming itch but is still very light and accessible for those who do not want to bust out a 600 page rule book to figure out wind conditions in grid g6. The tagging mechanic is very creative as it encourages you to basically destroy your own cover…and cover is a big deal in Heavy Hitters. It is beautiful, as it comes with pre-painted minis so this game will turn heads right out of the box.

If all that was not enough the game offers a lot of replay ability due to the alternate setups the map can have which makes each match feel unique and different as you will need to find new strategies to win. I feel as though this game is very kind to newer players as it is very hard to get “removed” from play since winning is much more doable through tagging structures that simply eliminating other players. With that said there is still that aspect of feeling “ganged up on” but that is often more due to poor positioning on a player’s part over the game itself (unless your friends are mean).

Overall, this is a very beautiful, well-crafted game that offers a unique and very fun take on mech combat and area control. This one is sure to hit your tabletop like a loading skid while not walloping on your wallet too hard at the same time.

Cons: Dice in Combat (Luck Involved,) Chance to be Focused