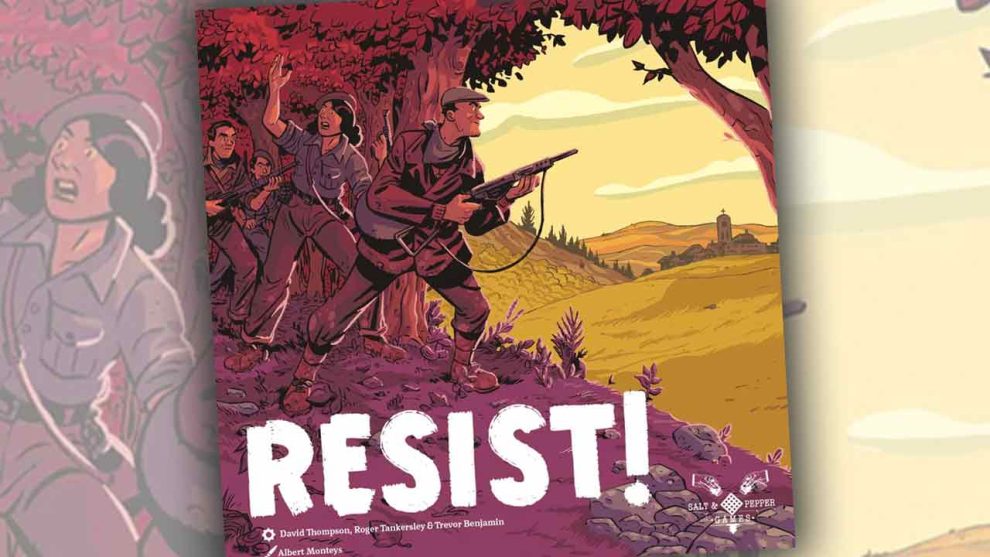 Ian Howard @RealLeafyDragon
Add Comment
Resistance is far from futile in this deck-management game about defeating Spain’s Francoist dictatorship. Join Ian for his review of Resist! from Salt & Pepper Games.

From 1936 to 1939, as the rise of fascism in Europe was accelerating, Spain was riven by a civil war between the combined leftist forces known as the Republicans and a collection of right-wing groups fighting under the banner of the Nationalists. Led by General Francisco Franco, the Nationalists eventually won the war and solidified their control over the country through misinformation, repression, and brutality. Some of those who opposed Franco’s horrific dictatorship became part of the Maquis: guerilla fighters working to destroy his iron grip on the nation. Using the skills and materiel earned at great cost during the Civil War, the Spanish Maquis fought not only to liberate their own homeland but also to support the neighboring French under the Nazi-backed Vichy government. Their acts of resistance carried on long beyond the end of World War 2, finally dissolving during the 1960s. Resist!, from Salt & Pepper Games, puts the player in control of a Maquis cell during the height of Franco’s reign.

Man on a Mission

During a game of Resist! the player is racing to complete as many clandestine missions as they can manage using their available Maquis agents.

The player starts with a deck of 12 Maquis, either randomly chosen from the available 24 or drafted at setup using a simple “flip two, keep one” method. The deck also includes three unplayable Spy cards, which clog up the deck and can potentially lead to a loss if the player ever draws a hand with only Spies. (Some effects will add or remove Spy cards to/from the deck over time.)

Each round, the player draws a hand of 5 cards from their deck. They’ll play these cards to (hopefully) complete a single Mission of their choice. Maquis cards have both abilities when played and Attack values that they contribute; correspondingly, Missions require a certain value to be completed. Play out all your Maquis, add up their individual Attack values to get your total Attack Strength for the round, then spend those “points” to defeat the Mission. Easy peasy.

However, there are typically a few Enemies at each Mission who can also be defeated by spending Attack Strength. Some Enemies, like the irritating Guards, change how the player resolves their attacks. Others, like the Military and Spy Masters, directly impact your Maquis deck in different ways. Perhaps the most pressing are the deadly Counter-Guerillas, who eliminate innocent Civilians if left undefeated; lose too many Civilians and the Maquis must abandon the fight. Missions, too, can have effects that trigger based on whether you complete them or not. Deciding how to triage your limited Attack Strength is the bulk of the game.

Once your Attack Strength is fully spent (or you choose to stop spending it) you’ll resolve any lingering effects, discard any Spies remaining in your hand, flip a new Mission, and check whether the game has ended.

The game can end in a few different ways. If the player draws a hand with no Maquis, if 5 Civilians have been lost due to undefeated Counter-Guerillas, or if 2 Missions have been failed, then the player (and the resistance) is defeated. Alternatively, the player may choose to end the game after any round, totaling up their points from successfully defeated Missions to determine their final score. The scoring table is tough: it takes quite a few successful raids to achieve anything greater than a stalemate between the Maquis and Franco’s army, and achieving a positive future for Spain as a whole requires near-total dominance. To secure such a win, you’ll need clever strategy, careful play, and a phenomenal understanding of timing.

Our Time Is Now

Every round of Resist! features four phases: Plan, Attack, Aftermath, and Recover. Of those, the bulk of the game lies in Plan and Attack. These are the phases in which you’ll pick your target Mission, play out your Maquis, and find out whether your agents can succeed against the odds.

At the start of the round, you’ll look over your available Agents. Each one holds several possibilities. You see, when you play a Maquis card, you can choose whether to play it Hidden or Revealed. Hidden cards will return to your deck after play, but often have a lesser value or effect—they can’t work as effectively from the shadows. Revealed cards are removed from your deck after playing, so you typically get a big bang out of them when you play them this way.

Most of the Maquis effects also only take place during a specific phase (either Plan or Attack). This matters because during the Plan phase, you probably won’t know what you’re up against. Enemies attached to a Mission start face-down. You know how many there will be; you just don’t know whether that lurking threat is a puny Guard or something more dangerous. Maquis effects during the Plan phase often help you navigate this lack of information, for example by flipping an Enemy face-up, or ready you for the worst by letting you draw extra cards or similar.

Once you’re ready to move out of the Plan phase, you’ll commit to the Attack phase and pick which Mission you want to attempt. When you do, you reveal all face-down Enemies on the chosen Mission you select. Now you’re able to play those powerful Attack abilities on your Maquis! Unfortunately, if you flip a particularly nasty threat, you can’t back out. Your agents are already on their way, armed only with whatever little bit of planning you could provide them.

This is what makes Resist! exceptional. The cards themselves are not complicated and the gameplay is easy to understand. Yet each and every moment of the game is saturated with decisions on when and how to play your cards for maximum effect, how to get the most information for the least investment, and most importantly when to cut your losses. There are times when you realize too late that a Mission is out of reach and all you can do is try to mitigate the damage.

In case it isn’t obvious: I think Resist! is an incredible game, a clever and taut design that captures the theme well. While many solo players don’t care for beat-your-own-score modes, it works for me here since there is a clear threshold for victory at baseline. For those looking for a long-term challenge, there’s a set of 8 scenarios to play as well as a campaign mode that links them all together. The scenarios and campaign do not introduce any new cards or major rule changes, though, so they’re mostly similar to the standard game.

When I first saw Resist! I wondered if it might have too much overlap with the excellent Maquis, the other quick-playing anti-fascist solo game about resistance agents during World War Two. I was relieved to discover that the two games are, frankly, nothing alike. To be honest, Resist! feels more in line with Sideroom Games’ For Northwood! (and not just because they share an exclamation point). Both feature an emphasis on managing your hand well, proper timing, and picking the best path through the various challenges.

Like For Northwood!, the art in Resist! is technically solid yet leaves me a little cold. These are gorgeous, saturated images that immediately catch the eye…but I can’t look at the cartoonish elements, the lantern jaws and oblong faces, without thinking that it misses the mark slightly. This is a game about people risking their lives to defeat an existential threat. Civilians die in this game. Maquis agents are captured. For me there’s a small but meaningful disconnect between the exaggerated tone of the art and the real history that the gameplay is intended to evoke.

The gameplay, however, is magnificent. Whatever qualms I have about the art disappear as I cautiously weigh up my acceptable losses or discover a handful of menacing Guards blocking my Mission. It’s tense and exciting in all the right ways, a combination I truly can’t resist. 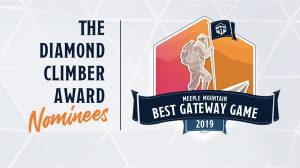 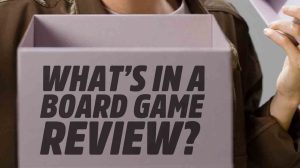 What’s In a Board Game Review?

Depending on their style and preference, reviewers might approach a game from many different angles. Join Ian to investigate the art of reviewing itself when... 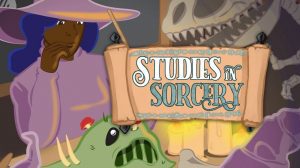 Earning your postgraduate degree isn’t easy, but it can be fun...even when the subject matter is Dark (Arts). Read Ian’s review of Studies in Sorcery from... 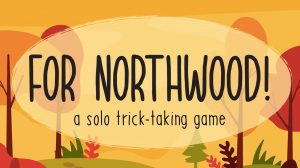