I’ve played both of his games so far, and I think it’s safe to say that designer Fabio Lopiano is obsessed with turn order. His first game, Calimala, is a tightly wound euro that introduced a system of cascading player actions as the game progressed. The early rounds are characterized by taking actions that would best benefit the player taking them; the late game was characterized by taking actions that benefit the player taking them without also giving the other players more beneficial actions as well. 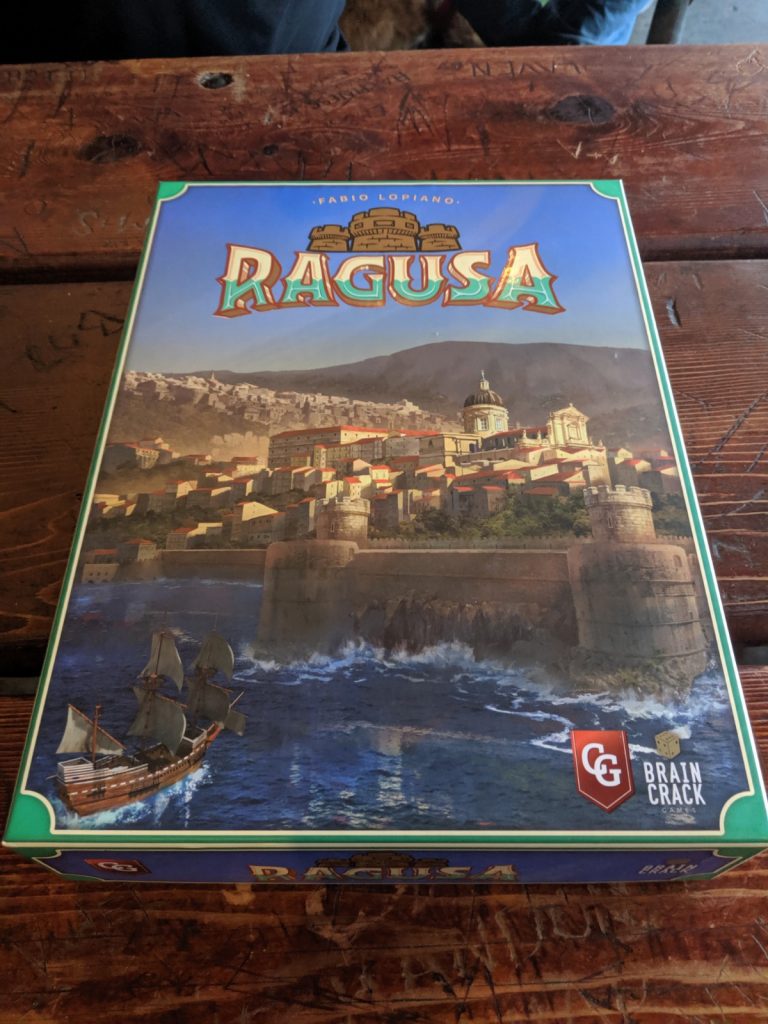 In Ragusa, the follow-up to Calimala, Lopiano iterates on foundations and ideas he set with his first game, and adds in a more complex economic engine. And in the tradition he started with Calimala, Ragusa is an exercise in painful decisions.

But if you’re not a mechanism-obsessed geek like me, why care? Because Lopiano is creating designs that don’t function in the way other games do, and that is a reason for anyone who believes games that are art to be excited. I definitely was.

Ragusa takes place in Ragusa (now known as Dubrovnik), a coastal city located in southern Croatia. Each player, in standard eurogame fashion, is a rich person who wants to build up the city and become even richer off of commodities trading. The board shows the city, arranged along a hex grid. And this is the start of my favorite innovation that Ragusa offers.

Essentially the game is a worker placement game; each turn a player will place a house at the intersection of 3 hexes, and activate each hex in the order of their choosing. Whether or not a player can place a house at one of the intersections is dependent on their having enough resources to do so. Rural hexes require one wood for each house of the player placing it, city hexes follow the same rules, but with stone. So, if I had one house bordering a wood resource, and I placed a second house bordering the same hex, it would require two wood, and so on. 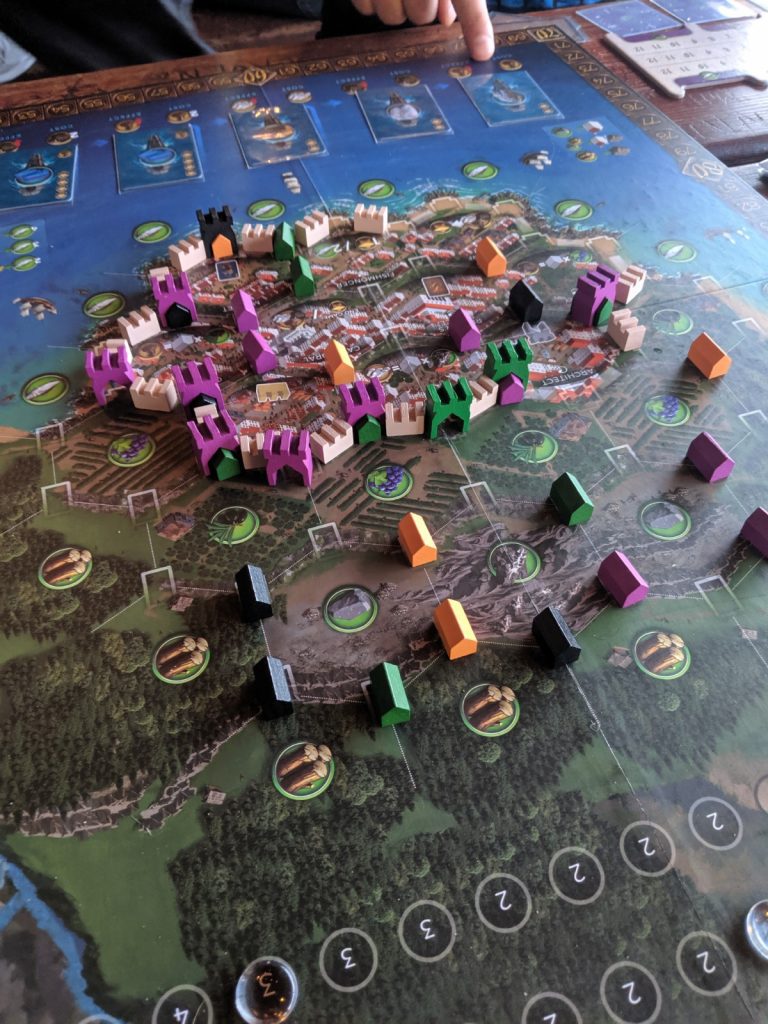 Here’s where it gets even more interesting, resources are not consumed; instead they represent a supply chain. So once you’ve got two wood, you’ve got it for the rest of the game. There are also consumable resources called commodities, which are represented by oil, silver bars, and wine. You get resources by activating the rural hexes with house placements. 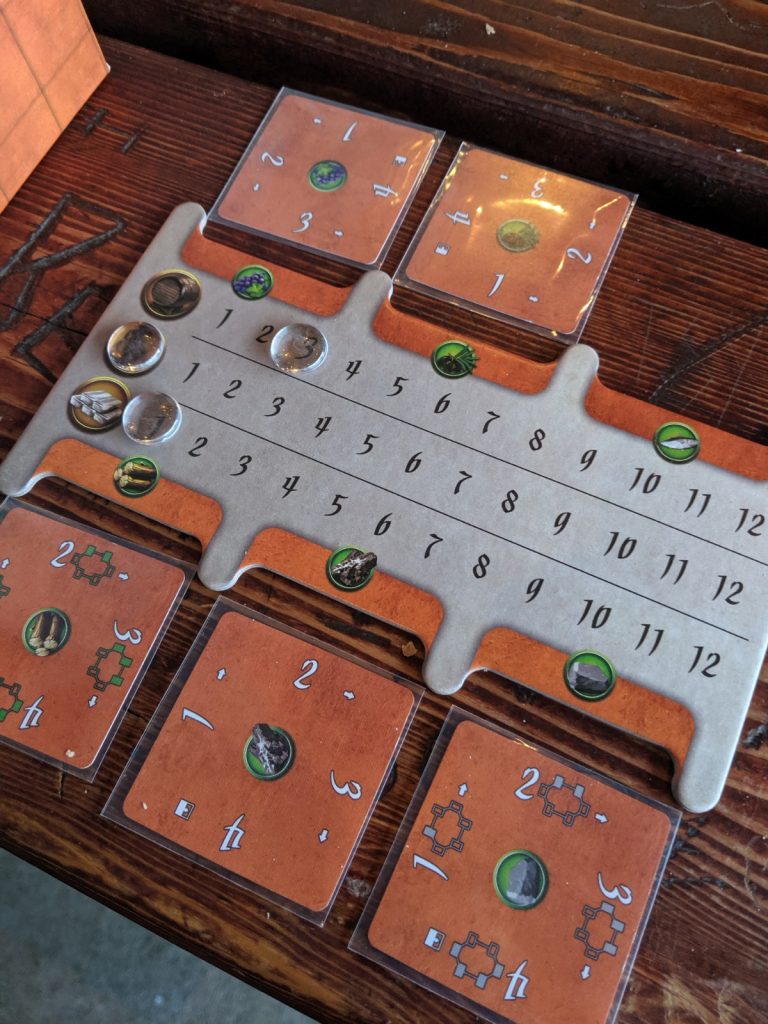 Player board and resources.

City spaces activate as well, but they allow players to do additional actions, rather than just increasing resources. One city space allows you to build walls around Ragusa, while others give you commodities proportional to how much you’ve developed the resources those commodities require.

But wait there’s more, and here’s where turn order comes in. Whenever a player places a house and activates a city hex, all the other players who have houses bordering that hex get to take that action as well. So, theoretically, a placement of a player’s sixth house in a hex could trigger five more actions spread out between all players. I’ll come back to this.

Ragusa is a victory points game, so you get points for building walls, selling commodities, accomplishing contracts, and so on. The commodities have prices that shift as the game goes on, depending on which contracts are fulfilled by players, but I found this to be the weakest aspect of the game. I love a good model of a commodities market, but this one just felt like unnecessary bookkeeping for the players to track.

The game is fairly involved and difficult to describe, in spite of its relatively simple ruleset; especially when compared to other medium and heavy-weight euros. I will also note that there are several confusing bits in the rules that you might need to go to BoardGameGeek to resolve. I recommend this quick rules guide for an easy summary of the game.

But now let’s talk about taste, and painful decisions. Before writing this review, several of my friends who’d bought the game (as well as folks in the board game media I consume) described the game as “weird.” I don’t really like the word weird, because most often it is applied to something that people don’t understand. They use the word as a judgement without any definition to go along with it. 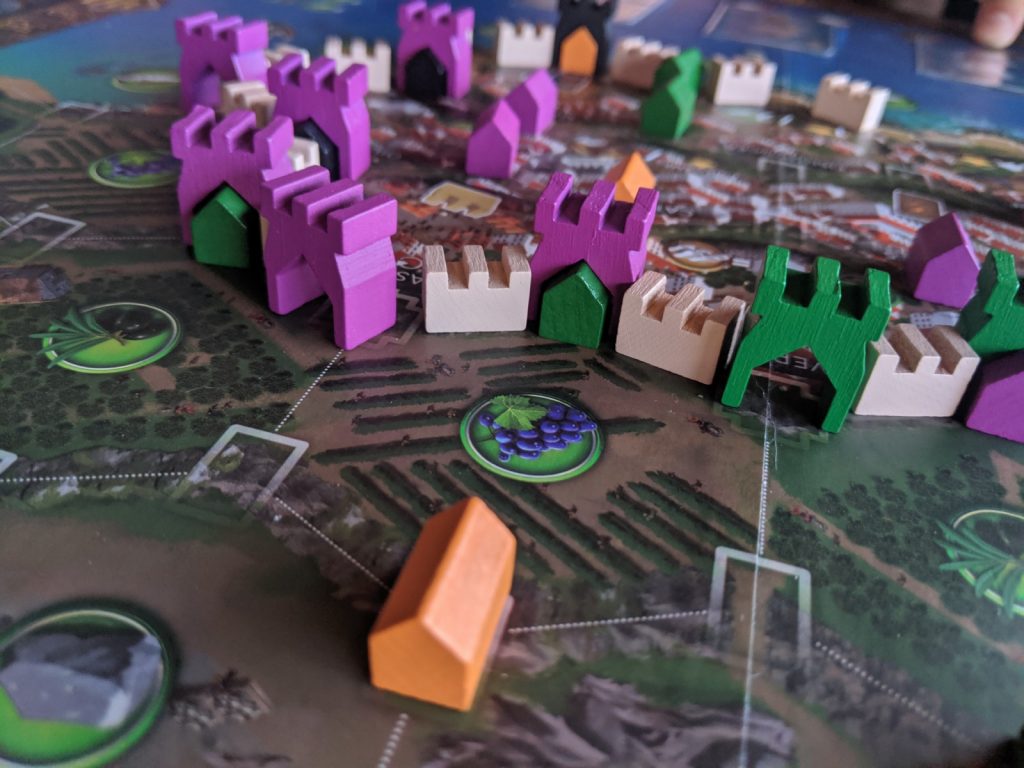 Ragusa’s cascading triggering of actions mechanism is one that I haven’t seen before, and part of the reason it likely feels uncomfortable to some players is due to the fact that you can make moves that don’t do much for you but enormously benefit your opponents. One of my friends I played the game with described his experience as placing his houses and not getting as much stuff as other people were.

It’s painful in a game when you have to make a decision that doesn’t just benefit you. But unlike many bland eurogames that feature vague city building as a theme, this one actually models the growth of a community with a compelling thesis – that we’re all entwined and interwoven with each other.

Pretty cool for a game about putting wood on hexes.