When I first heard of Push Fight it was 2012 and an article from the folks at Penny Arcade caught my eye. This, they extolled, was one of the best, most elegant games they’d played, and they recommended it without equivocation. So I ordered a copy from designer Brett Picotte who, at that point, was selling them out of his garage in Missouri. A couple weeks later it arrived in a nondescript white box with the name plainly stenciled onto it. There was no flash, no pizazz, and no sizzle… Until I played it. 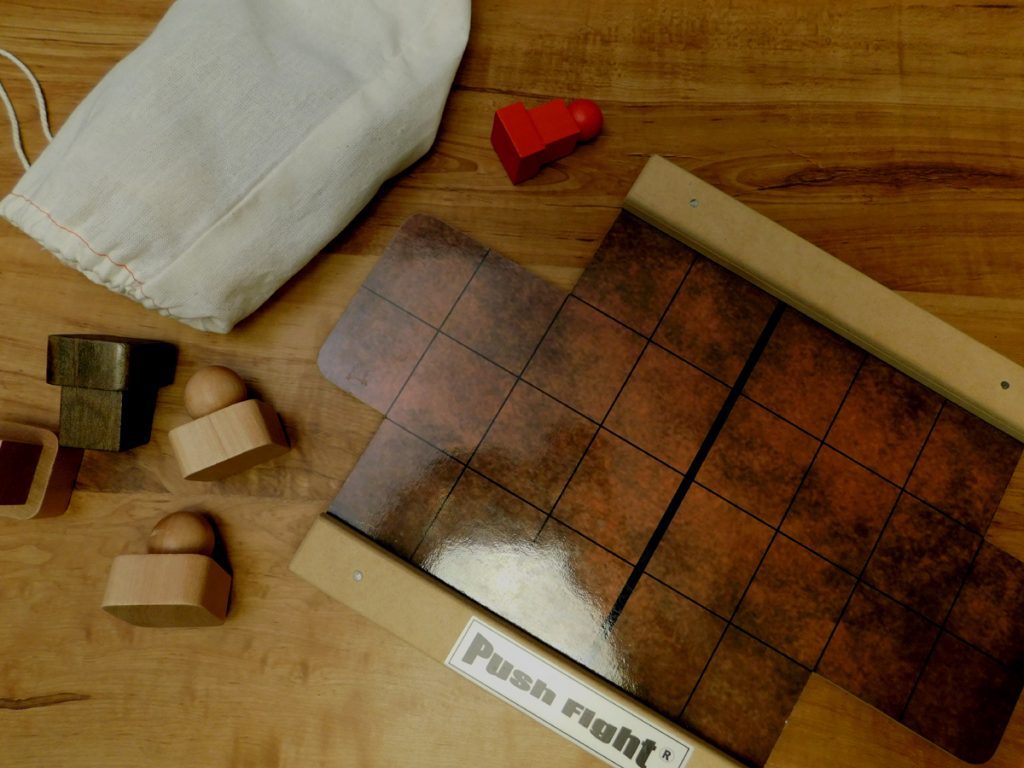 The game is immediately familiar, while at the same time unique. Much like the abstract classic Abalone the gameplay involves you and your opponent pushing each other’s pieces back and forth across an oddly-shaped little board until one person successfully pushes one of the other player’s pieces off the edge.

But, unlike Abalone and other similar games, Push Fight has boiled the game down to its essence, and it hums like a perfectly-tuned engine. Each player only has 5 pieces: 3 large, square pushers, and 2 small, rounded pawns. The game board is similarly svelte, containing only 26 spaces, 10 of which are immediately occupied by the pieces. 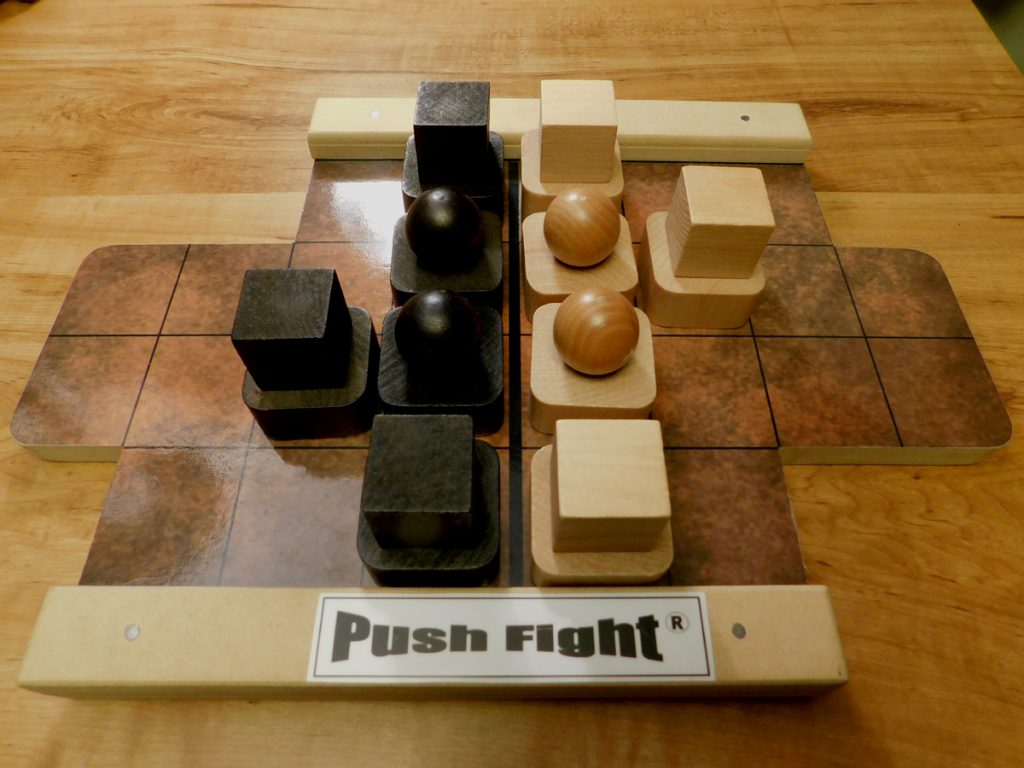 On your turn, you can make up to two “moves,” which consist of taking any one of your pieces and moving it anywhere else on the board provided it can slide there via open horizontal or vertical paths (diagonal moves are never allowed). These moves allow you to position your pieces, specifically your pushers, for the coup de grace of every turn—the push. This part of the turn, unlike the moves, is required, and in it you must take one of your pushers that borders another piece and push it one space in any direction.

Your pushers can push any number of pieces, though still only one total space, allowing you to position long rows of pieces with your moves and then culminate in pushing your opponent’s piece from across the board. Immediately following your push, you take the red anchor piece and place it on the top of your pusher as a reminded that this piece cannot be pushed during your opponent’s next turn. This is the start of Push Fight’s understanding of strategy. 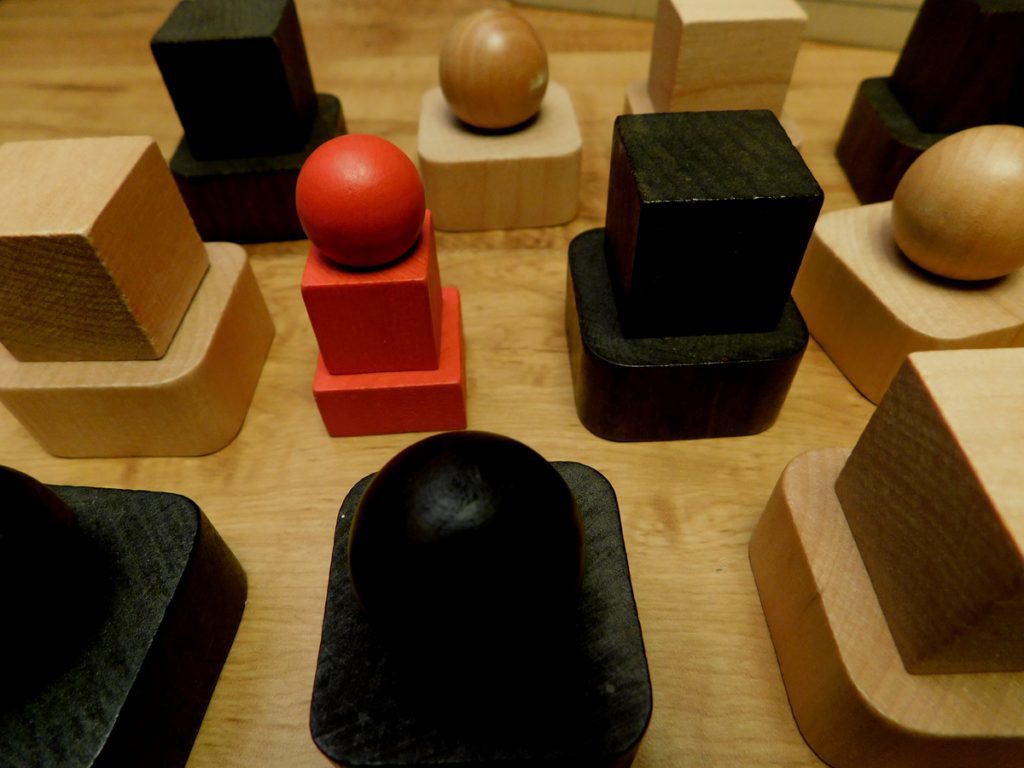 By locking down a pusher each turn, the game is forced to progress, stripping away the option to simply bounce your pieces back and forth and force a tedious stalemate (a problem with many abstract games, even some of the good ones). Knowing you can’t look back, you’ll find yourself always keeping your eyes ahead, figuring out how to navigate around the board, work the other player’s pieces to the edge, corner them there, and finally push one off for the victory.

The game feels like a judo match held in a closet. Every move carries huge importance, due to the small size of the board, and one misstep can spell instant doom. On the other hand, two players who are locked in and focused can duel each other continuously, trading blows, and sparring back and forth. 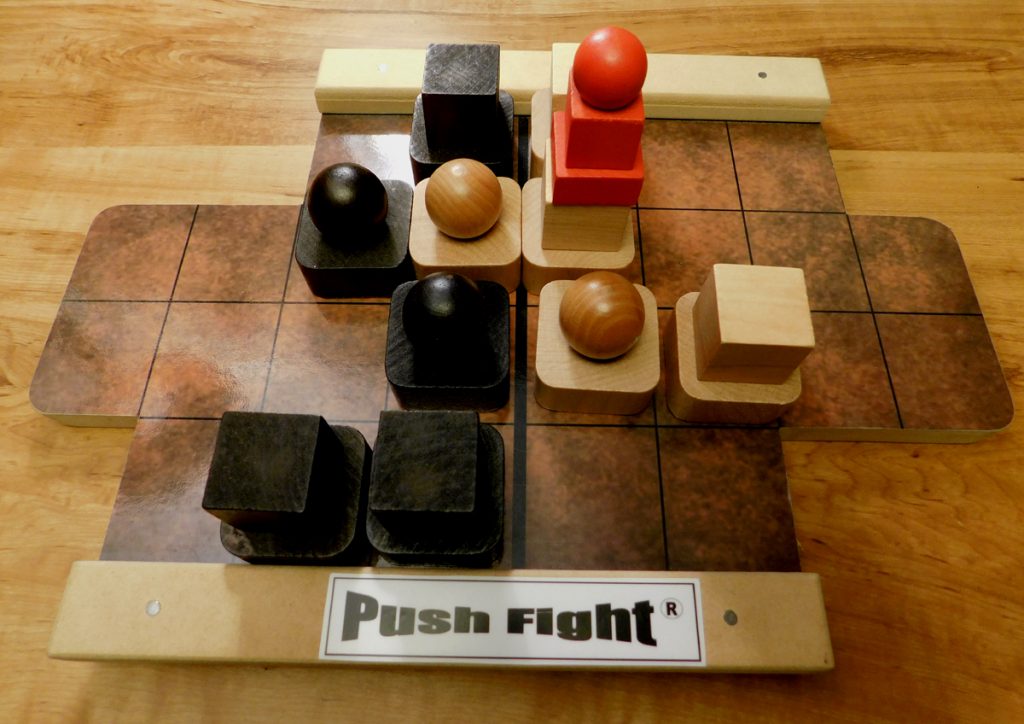 Now, this won’t appeal to everyone. First of all, abstract games are a fairly niche market in their own right, with relatively few breakout hits and even those, usually, are only the ones that layer on heavy doses of theme (Santorini, Azul, etc). Other equally-deserving but less thematic games come and go relatively unnoticed in the broader marketplace, and then some, like Push Fight, don’t even register on the community’s radar.

There are a handful of reasons for this. First, the game is atrociously-named. Abstract gamers don’t know what to make of it because it’s too literal (compared to such minimally-descriptive games such as Quarto and Tintas), and it’s too on-the-nose and dull for anyone else. Layered on top of this distinct lack of flair is a lack of marketing. To date, Penny Arcade is the only place I’ve ever heard the name Push Fight mentioned. They liked it so much that, for a while, they manufactured and sold it on their online store. This, too, probably made the game’s life difficult, as Penny Arcade is better associated with video gaming than tabletop. Plus, the $50 price tag was dauntingly-high for an unknown game.

Following its exit from the Penny Arcade store, it was out of print for a while before the designer started making and selling the game himself, again, at PushFightGame.com, which is where it resides now. In a marketplace that is growing increasingly congested with high-quality games demanding our attention, it takes no small amount of dedication, effort, and creativity to get noticed, and in the roughly 10 years since its creation, Push Fight has been decidedly lacking in all of those.

And that’s a shame, because the game itself is phenomenal—taut, concise, and exciting—and one that every fan of a good abstract strategy game should have in their collection.