Plenty of board games let you immerse yourself in a fantastical world, letting you escape reality and live out some escapist fantasies. Maybe they let you take up sword and shield and be a brave knight, fighting off dragons. Perhaps you’re an alien race seeking to terraform a planet to your liking. At its best, board gaming allows us to create special experiences together and, just for a brief moment, lets us suspend our disbelief and collectively feel like badass wizards or explorers.

With On Tour, you are getting first-hand experience in what it feels like to be on tour with a rock band… as the band’s manager. That’s right—rather than revel in the glitz and glamor of the rock and roll lifestyle, you get to revel in Excel spreadsheets and Google Maps. While your rock band colleagues get to party and relax until the sun comes up, you are frantically trying to handle incoming requests and book out the most optimal route. Admittedly, managing someone’s calendar does not sound like the most compelling thematic material on the first pass, but I can assure you it’s more engaging than you might think.

Get the Show on the Road Road

On Tour is a quick, 20-minute game for 1-4 players, but can scale up to 12 or more players (yet still maintaining the 20-minute playtime) if you purchase some add-on packs. The game comes in a fairly compact box without much in the way of fiddly bits. You get four player boards, four dry erase markers, two dice, a deck of cards, and a rulebook. It’s a modest package that hides a clever game experience underneath. 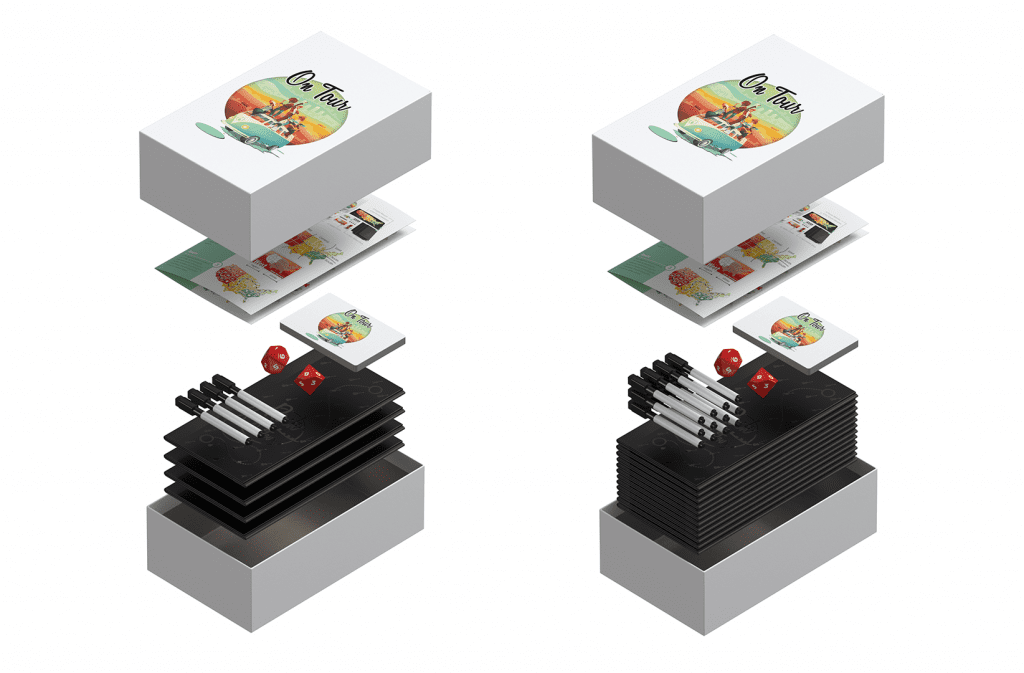 The gameplay in On Tour is straightforward and simple; on your turn, roll the two ten-sided dice that come with the game, then combine both dice to create two different numbers. For example, rolling a “6” and a “1” will give you 16 and 61. You’ll draw three cards, each containing the name of a state and a larger “region” of the map. Pick two out of the three cards and write both numbers in two places on your personal map board. You can write the number within the larger region (i.e., “South” covers everything from California to Florida), or you can fill the appearance request by booking them in the specific state mentioned on the card, letting you put a circle around that state. Rinse, and repeat.

You keep going like this until you get your map of the United States completely full of numbers.  Once all players have filled their boards with numbers, everyone takes their dry erase marker and tries to make the longest path possible, using the numbers you’ve written on your board. The catch here is that each number you pass through must be the same or greater than the one before it. You’ll get one point for each state you visit, and another point for each state you visit that has a circle around it. There are no end-of-game bonuses or special scoring rules — just simple addition. The person with the most points wins.

The Pitfalls of Poor Planning

The game seems dead simple at first; when I read through the rules with my husband we both sat there for a moment thinking, “Is that it?” It didn’t quite click for us off the bat, but we shrugged and decided to give it a go anyway. For the first 5-10 minutes it felt simplistic: just roll and write down the numbers, right? I had the strategy of packing all my big numbers on one side and my small numbers on the other side. I was even brave enough to circle specific states instead of using the option for regional placement. It was too easy. It wasn’t until just over the halfway point into our first game that I saw my husband’s roll, looked down at my map, and had a sudden, dreadful, pit-of-my-stomach feeling wash over me. 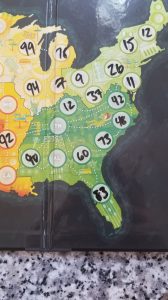 Blocking yourself in is extremely easy in On Tour.

“Oh no,” I thought, “I’m completely screwed.” See, in my attempt to put all the high numbers on the South side of the board and all my low numbers on the North side of the board, I had completely blocked myself in. I no longer had a way to make the drive from North Carolina to Florida, because I had carelessly booked myself into a corner in the Deep South. One very careful path still existed for me to get my way out of this mess, and it involved a frighteningly specific set of rolls to take my tour through Tennessee and Georgia, dipping into Florida then narrowly escaping up through Alabama. A few moments later, my husband uttered an expletive, lamenting his lack of options as well.

From that point on, On Tour became a rollercoaster ride of anticipation, waiting for those dice to fall, hoping they landed on just the right combination of numbers to give me a way to squeak out of my predicament and pick up my tour again. You feel the noose closing in on you as more and more throwaway spaces fill up faster, limiting the number of options at your disposal to deal with bad rolls. As the game dwindles down to its final moments, all your hopes and prayers are riding on one last roll, praying for doubles so you can use a wild space to get out of your predicament. In my case, my prayers weren’t answered. I lost, severely and decisively.

On Tour is a distinctively solitaire experience; yet can be played solo or in a large group of people. The social component of the game comes from lamenting in your poor logistical planning alongside your friends, or maybe even the evil glare you’ll shoot that one friend who cheers at a dice roll while everyone else groans. Few things in gaming have made me laugh quite as hard as clasping my hands together in front of me and whispering a silent, desperate prayer for a wildcard roll to fix my shoddy tour schedule — only to drop my head to the table in exasperation when we roll yet another forty-two. 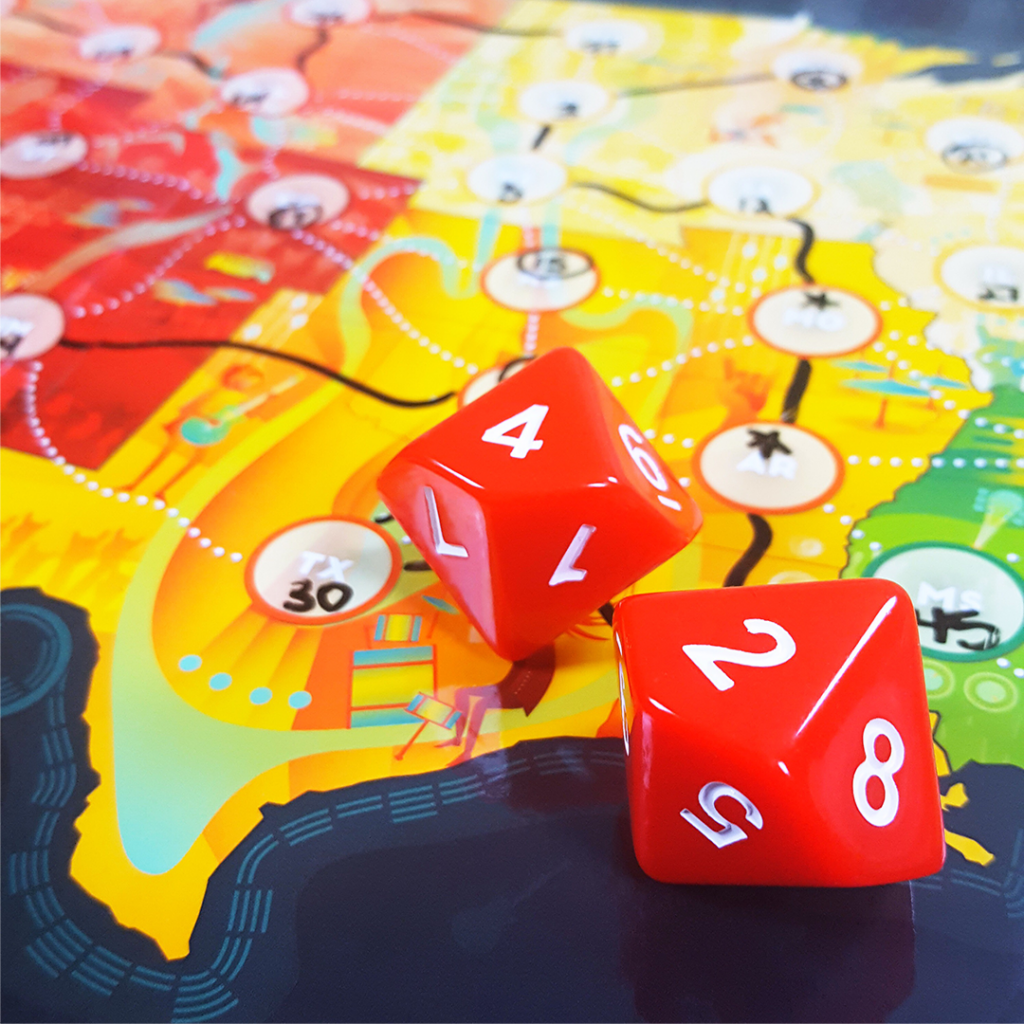 Losing in On Tour isn’t like losing in other games. At the end of the game, when you stare down at your map of the United States and reflect on your abject failure of a rock tour, you see all the spots where you made the wrong call. You’ll ask, “Why didn’t I put that wildcard in Oklahoma?” Someone else will shout, “If we had gotten one more wildcard, I could’ve won!” If you lose, then the fault is on you, and nobody else. Every person at the table has to deal with the randomness of the game in the exact same way, so nobody gets unfairly screwed over. In a way, it is kind of cathartic, especially if you have other people around to share in your own sense of failure. Then, you’ll all frantically erase your boards and reshuffle the deck and grin at each other, asking “How about one more time?”

Who knew being in charge of a band’s tour schedule could be this compelling?