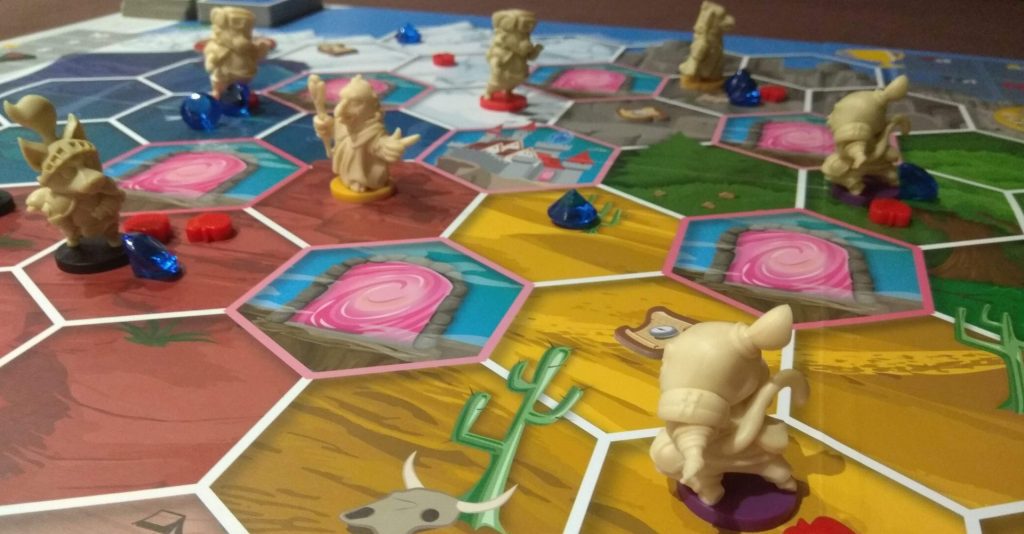 My eldest daughter is not yet 4 years old. We are waiting with great anticipation for the day that we all can play a game together that doesn’t come in a yellow box. Nothing against HABA, they make amazing games, but there are only so many times I can feign excitement when playing My First Orchard. A lot of these early games are mostly just toys with rules and trying to get my daughter to follow those rules can be stressful.

So while I wait for the day that my daughter can play some meatier games, I make a list of those I can’t wait to play with her. Mice and Mystics is one I am very excited for, as are the likes of Takenoko, Potion Explosion, and anything from Kids Table Board Gaming. My Little Scythe was high on the list—as both a fan of My Little Pony and Scythe I couldn’t be more excited to play it with her.

When Jamey offered me the chance to review it, I pounced. Spoilers: I was right to be excited for it. 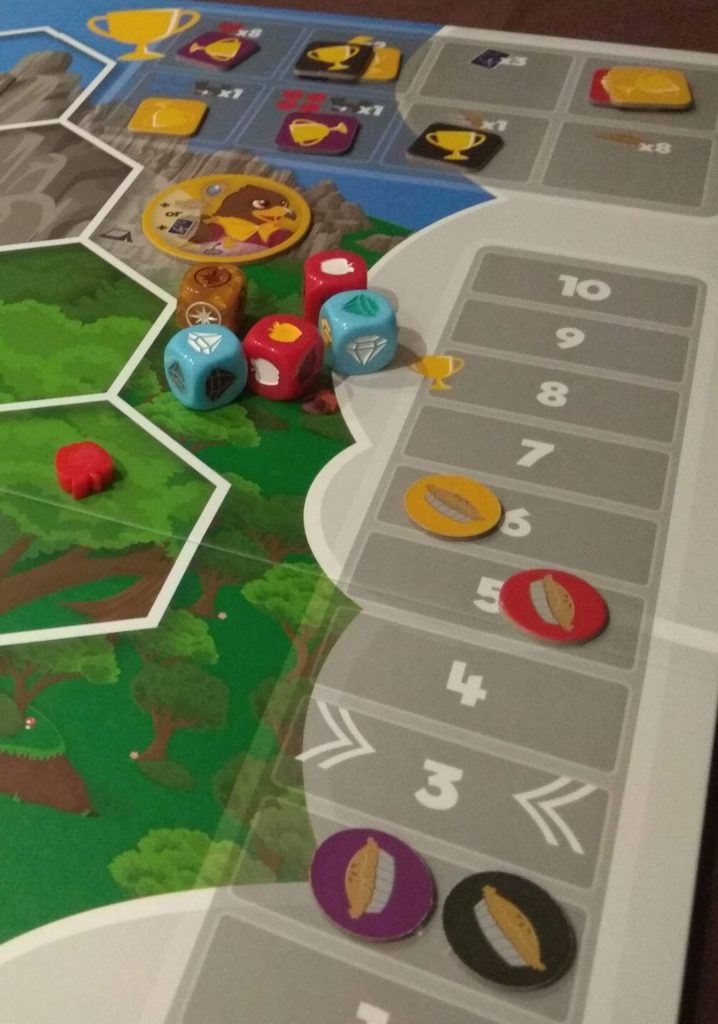 My Little Scythe (henceforth MLS) came about when a devoted father wanted to play Scythe with his children. The game was tweaked and colored into a My Little Pony version that you can still find online if you look hard enough. The community was so enamored by the redesign that it won the Golden Geek Award in 2017. Stonemaier games took the idea and printed a version that wouldn’t get them sued for copyright claims.

If you’ve played Scythe, you’ll see the roots of MLS: the first player to complete a set number of objectives ends the game, you have a popularity track, a military strength track, exploration cards, military cards, resources kept on the board, etc.

But everything has been covered with a big splash of My Little Pony paint. It’s bright and kid-friendly with a complete overhaul of the theme. No longer are you anachronistic mech-deploying European soldiers, now you are anthropomorphic animals seeking glory and excitement. Popularity is now friendship, fighting now involves throwing pies, and everything is just so darn cute.

The goal of the game is to gain 4 trophies, very similar to the star system from Scythe. The first player to earn 4 trophies ends the game, but every other player gets one more turn to catch up. Ties—which are exceptionally common—are broken by the player with the most friendship. Because friendship is victory* (edited for trademark infringement).

On your turn you’ll take one of three actions: move, seek, or make. Each action is outlined using iconography on your player board and you’ll move a pawn to mark which action you take so that you don’t repeat an action. The Move action will move one of your two miniatures along with the resources underneath them. Seek will have you spawn more resources onto the board, while the third action, Make, lets you use your resources to upgrade your actions, gain pies, or draw combat cards.

If you move into a space containing another player’s miniature, you start a pie fight. You each bid a number of pies and can add extra using a combat card. The player with the most pies wins and gets to keep any resources now in that space. This is the brunt of player interaction in the game and, depending on the child, could cause some conflict at the table. However, not only is winning a combat one of the trophies available, but the defeated player gets a small bonus when their miniature is returned to base camp.

The last thing I want to bring up is how to gain friendship. There are quests on the board that unlock adventure cards with three choices, usually consisting of a moral positive, moral negative, and a pass. While some of these increase friendship, the main way to increase it is with the seek action. When you seek to add resources, any resources you add to spaces containing enemy miniatures grants you 1 friendship. It’s good to give! 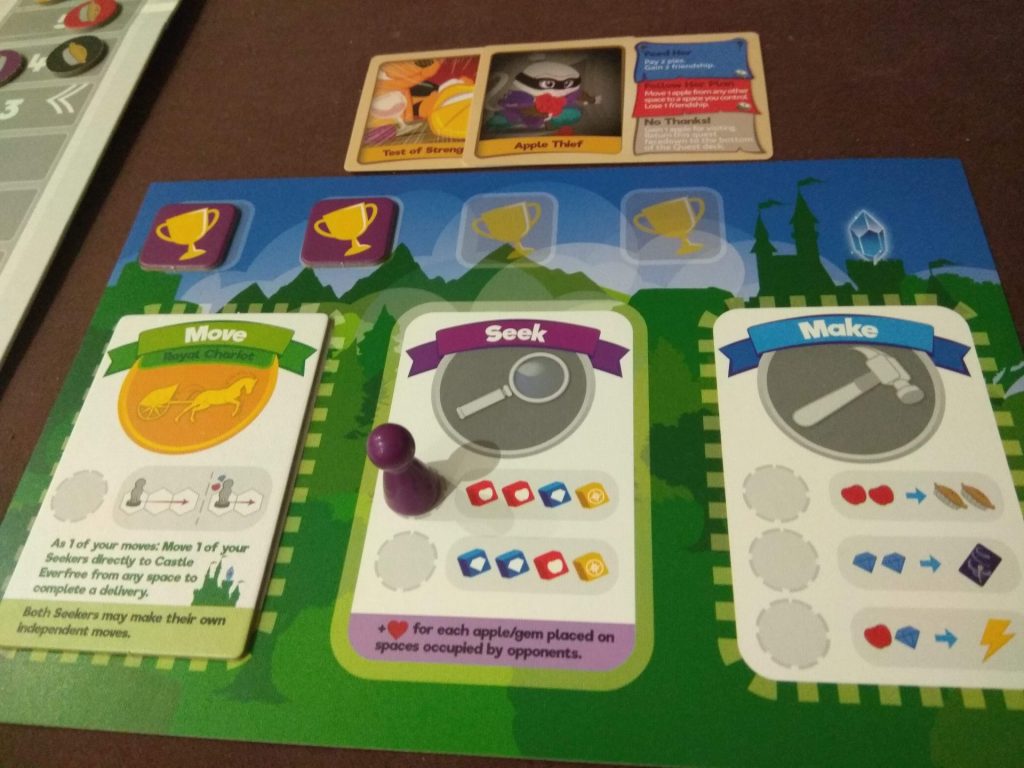 This is not a game for older experienced gamers and I don’t think the theme of it will draw in newer adult players. My Little Scythe is for the gamer parent, the one hoping to play something more interesting with their children or just hoping to lead their kids into heavier games. One of the best things about Scythe is the hybrid nature of its gameplay and MLS does well in providing that same sort of low-interaction yet still competitive Euro… for children. I can not stress this enough, the game is really simple. As it should be!

When it was just the adults playing, the actions were fairly obvious. Ties happen often because of the simplicity of gaining more trophies. Most require only two or three more actions from your current state, making the game abundantly simple. The random elements of the seek dice can also be frustrating, spawning resources everywhere but your territory. You’ll also beg for more movement and never get it, often making the game feel a bit slow. But, again, I’m an adult playing this and in no way should be considered the target audience. This game is not for adults!

I am never going to pull this out for my normal group, we will just play Scythe instead. But I have already opened this multiple times for my 3 year old. She has no idea how the game works, but MLS is a great toy for her all the same due to the wonderful miniatures and shiny gems. We played with her sitting next to mommy, let her roll the dice and move the minis, and read her the adventure cards like tiny stories. This game isn’t for her yet, but it will be.

For the correct demographic the game even comes with lots of lore to draw them in. A whole extra page detailing the story of their minis and an included paint guide if they want to start down that hobby. The game also includes a solo mode for when the caretakers can’t join in. 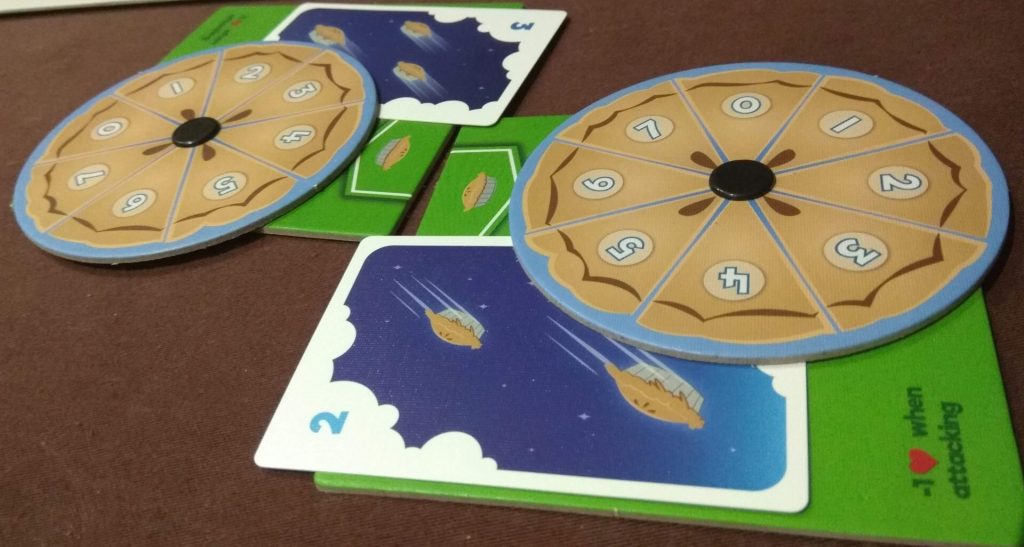 From One Parent To Another

Look, most non-parents have stopped reading by this point, so let’s get a bit more personal. You, like me, have learned a very valuable lesson from the COVID-19 pandemic: being a parent to a bored child is easily the most difficult thing I’ve ever had to do in my life. The very idea of a rainy day scares me. Whatever outlet I can give them is worth the investment; My Little Scythe is a very good investment.

I open the box to let my 3 year old play with the minis while I take the break to maybe, finally, use the toilet. As she gets older, I hope to actually play the game with her—thankfully it’s fun for both parties. When we can play Scythe together, I think that’s when I know it is time to put My Little Scythe away. And should she ever become a parent herself, I’ll give her the copy for her own kids.

Just… not at first. After all she’s put me through she can endure a few extra months of stress before I hand it over.

My Little Scythe is exactly what you expect it to be: a watered down version of Scythe full of bright colors and a kiddie theme. This is a game for children, which means it has a high toy-like aesthetic and a simple set of rules. But that connection with Scythe is strong, making the game a great stepping-stone to move your little woodland adventurer towards the meatier titles. I highly recommend it for all you parents out there looking for something worth putting on the table.