Ah the 1920s, a time of flappers, Gatsby themed parties, and secret alcoholism. At least those are the things that I associate the 20s with. Some people see the 1920s as a time of resource production, tribal politics, and mech warfare. In the game of Scythe, the world is shown as the latter version of the 20s. 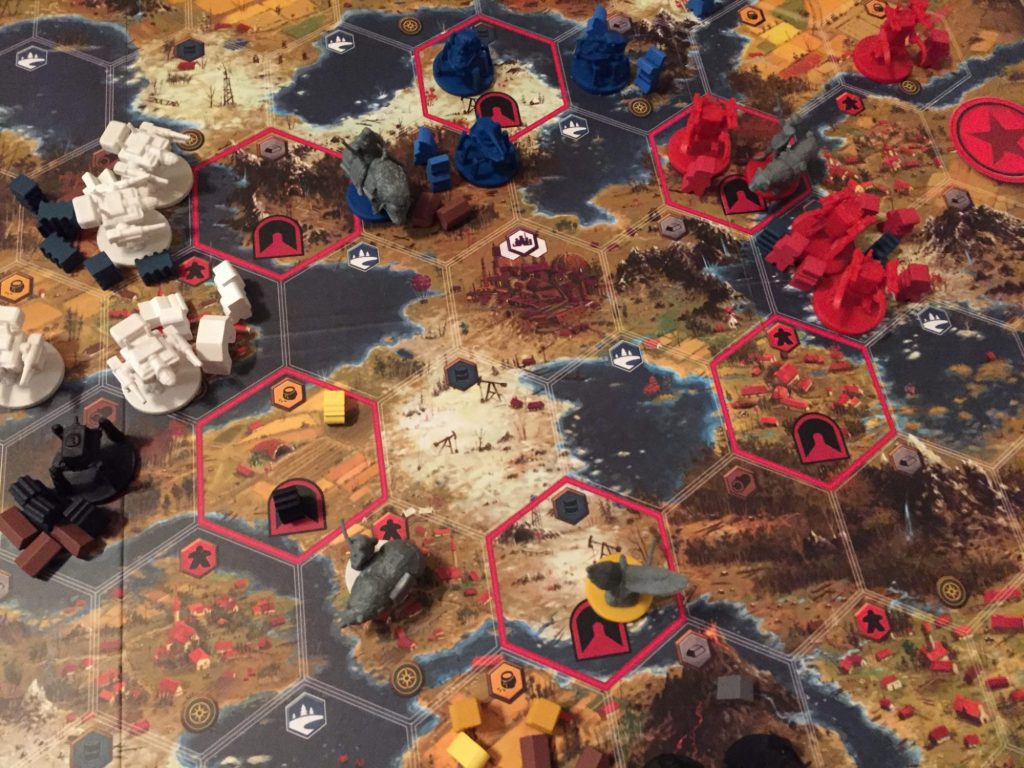 A Scythe is a tool that can be used to farm or used to kill. That is exactly what this game is: a eurogame with combat and conquest elements. The entire time you are playing Scythe you’re deciding which is more important: building up your own empire, or destroying your enemies. The game was designed by Jamey Stegmaier and is one of the most successful kickstarter board game projects to date. What makes this game really interesting is that the theme is so different than many other things I have seen. It takes place in an alternate version of the 1920s and combines the ideals of simple rural agriculture with mechs and modern technologies.

The Appeal of Scythe

Scythe has been one of my favorite games to play so far this year. I enjoy the mechanics of euros, but I don’t end up playing them that often because I’m generally not very attracted to the theme. That’s not the only thing I look for in a game, but it is very important to me, as well as story and the promise of adventure. I like to be taken on a journey when I play games, and leave with strong memories and stories to tell. While many other euro games do this, I think that Scythe does it on a much grander scale and really pushes the limits of what it means to be a Euro. 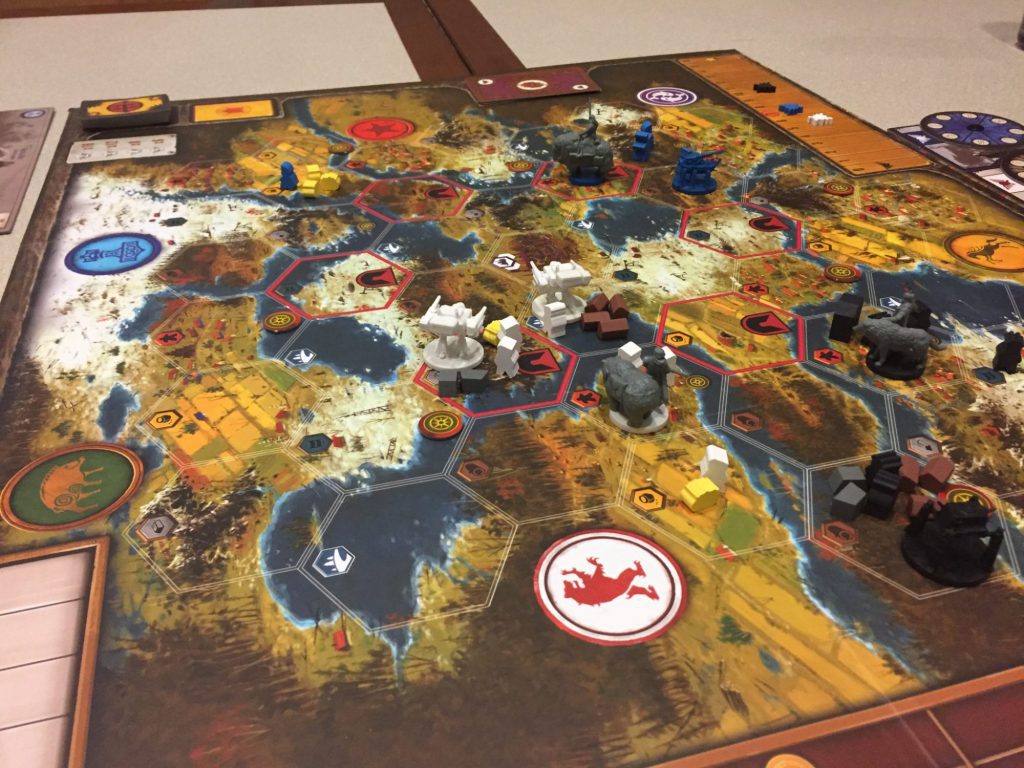 In Scythe, it all comes together to create this whole explorable world. There is a lot happening and even if you are not winning, there is just fun stuff to do. You can travel to the middle of the board and score the ruins of the lost factory and gain new technologies. You can trek across lands and through enemy encampments, trying to make peace and avoid combat or go in firing! This is also a game where, to a certain degree, the players control when the game ends; but whenever someone has the opportunity to end the game, I always just want to keep playing. Every time I play this game, whether I win or lose, I am left excited and wanting to play again.

It’s not just the scale and world or Scythe that make it interesting. There are many unique mechanisms in the game that make it shine. I love the player boards, with their upgradable abilities and top and bottom actions is something I have not seen anywhere else. This is a very unique game mechanism. The way this works is each turn you can choose to do actions from one of four columns on the player board. The top actions always have to do with gaining things, whether it’s movement, resources, trades, or power. The bottom actions always have to do with paying things for rewards. This includes gaining mechs, buildings, upgrades, and recruits. One of the coolest things is the upgrade action. When you take this action, you take cubes from the top bar, revealing better rewards, and cover things on the bottom bar, making actions cost less. I also love the way resources work and how they stay on the board at all times and there is always a risk of it being taken. It adds an extra amount of realism to the game. 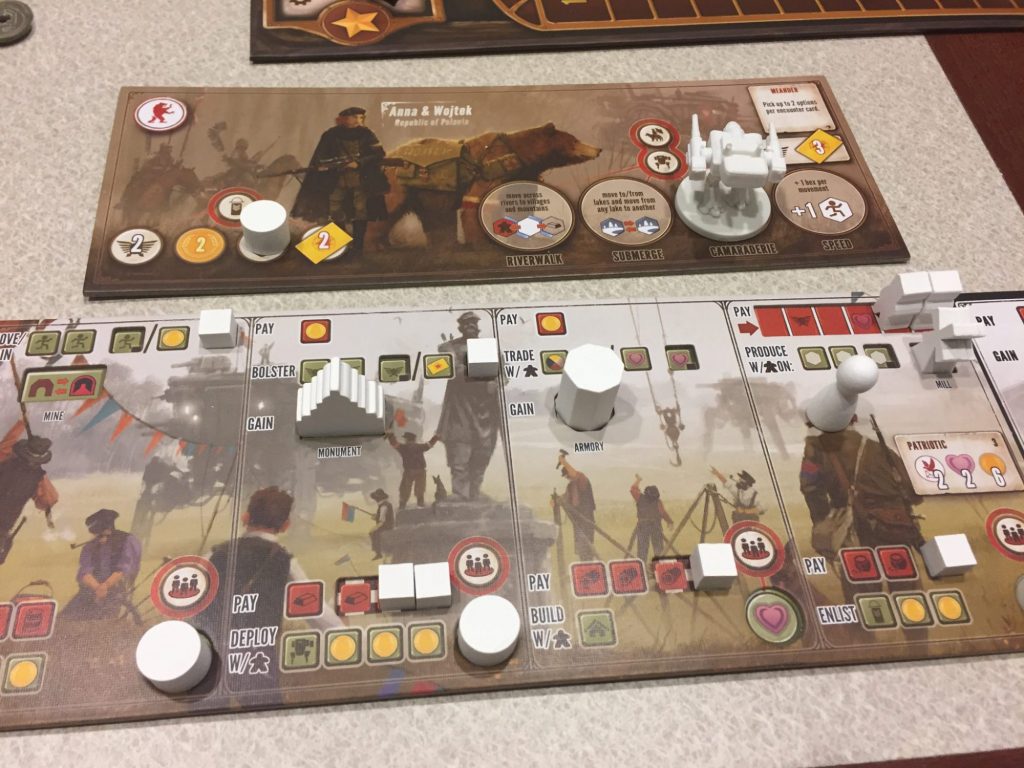 I can’t mention Scythe without touching on its production quality. There is so much in this box and every bit of it looks amazing. Each faction has unique mechs, workers, and a unique leader. The overall aesthetic and art design of this game just pulls you in and makes it all feel so real and immersive.

Some Things to Consider

I really do love Scythe, however it’s not perfect. There are a number of complaints I have about the game and, while these issues don’t stop me from enjoying it, they might be more important to others.

First off the combat is too mathematical. In fact it’s more math than combat. It centers around playing combat cards from your hand which show various power levels, then adding that number to another number you have selected on the battle dial. The combat mechanism itself is not horrible, but since combat is not all that common in this game, when it does happen, it’s more of an inconvenience than anything else. Also, the victor is kind of decided before the battle even plays out. In the games I’ve played, most of the time, one of the players just doesn’t play any cards and sets the dial to zero and takes the loss. The best thing about it is that it adds tension and makes people much more scared to face another player, so in that regard, this poor mechanic results in realism, in that people just want to avoid war at all costs.

Another issue that I have with Scythe is that the game moves very slowly. When you set a goal for yourself in this game, you should probably assume it’s going to take you a few turns to get there. For instance, say I wanted to build a mech and move my workers towards the forests in the center of the board. I’m going to have to spend turns to gain the resources, to build a mech, then spawn workers, then pick up the workers and maybe spend two or three turns just to carry them to the spot where I want them to be.The upside is that turns go relatively quickly, especially if you know exactly what you want to do. So, while it might take you a bunch of turns to do something, it probably won’t take much real time. 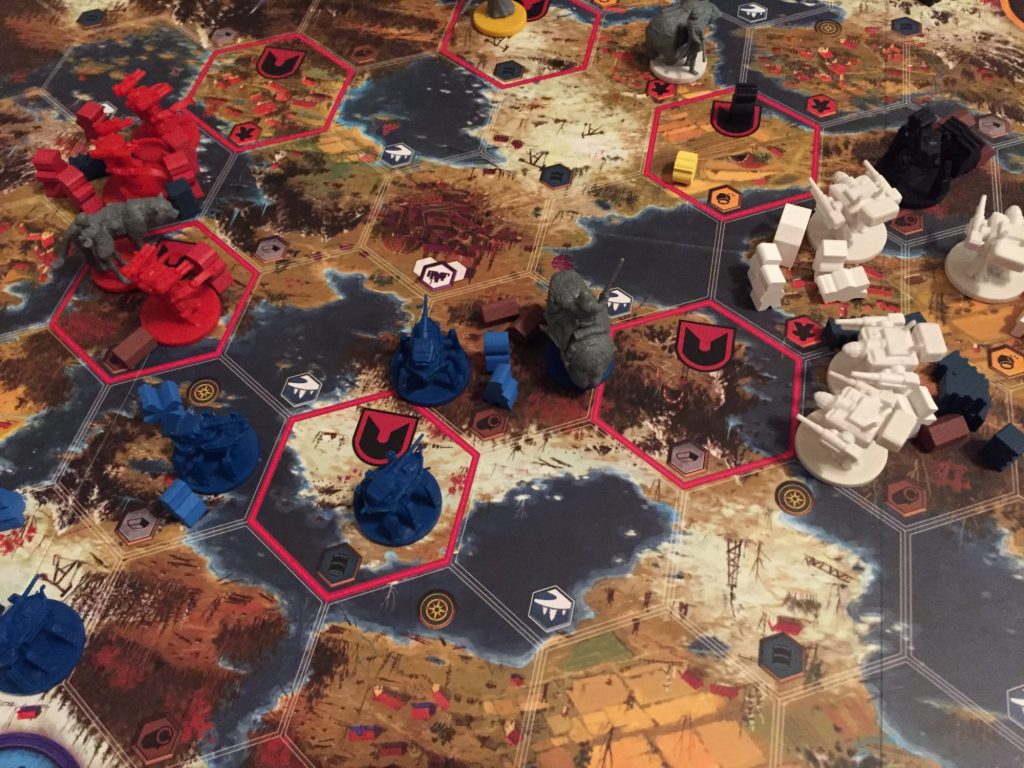 Is Scythe Right for You?

So, in the end, Scythe is less of a scythe and more of a shovel. That’s not a bad thing. It just means that if you’re looking for a game that combines conquest and battle with farming and resource management, you’ll just have to wait for something else to come along. But, if you’re looking for a euro game of epic proportions that will give you stories to tell and memories to share, then venture forth to Eastern Europa, lead your clan, and claim this land as your own!