AI in Board Games – A Preview of Beyond Humanity: Colonies

In the heart of Warsaw, just past the Building of Culture and Science, hidden in an apartment-turned-studio behind a chocolate shop, a small team of designers are doing something revolutionary. With ambition to rival Heracles, THM (Three Headed Monster) is developing a truly hybrid gaming experience using artificial intelligence. And even if you’ve decided that tech has no place in your tabletop fun, I encourage you to read on and learn about what could be the future of integrated gaming. 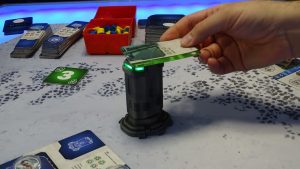 The tower reads RFID chips on the back of the cards.

Up until my play of Beyond Humanity: Colonies, my main understanding of app use in board games was CGE’s excellent Alchemists. In Alchemists the app hid information and could be replaced by a very bored 5th player, so I expected a simple database of information and a neat little gimmick. What I got was a living world. 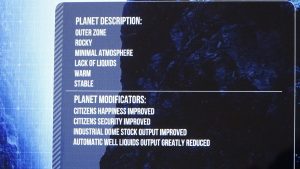 This was our new home

After connecting the main tower (the chip reader) to the app and picking our characters, it was time to choose our starting world. There are over 700,000 planets to choose from, each with its own conditions that help to determine the difficulty of colonizing. Some planets are icy, some are rocky, some have difficult atmosphere; all these things cause in-game effects to change.

Oh, and they’re real planets, scraped from NASA data and given game statistics.

Once we landed on the planet the app gave us our colony data. The display shows all the important information, such as population disposition and divisions (aka important professions) as well as the amount of available resources. As a semi-coop game it is up to all players to make sure the colony survives, but each player is given unique goals to achieve. I’m told the game will also have a pure co-op mode before release.

Once everything is set up, the game starts with the action phase. Standard worker placement gameplay allows you to gain resources, including money and “terran goods” (TG), with one non-blocking action space that lets players gain “decree” cards and construct buildings. You can also explore the planet and search for artifacts, which are really expensive to find and even pricier to research. 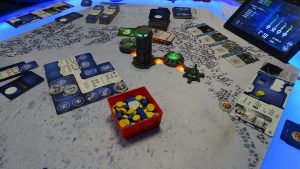 A typical play area after a few rounds.

Money and TG are used to pay for various things, but let’s talk about those buildings. When you propose a building you must spend a decree card to start the vote. Assuming you get enough votes—other players may spend decree cards to help—the building construction will begin. Each building can provide more actions for players to choose from and most provide important things for the colony such as housing, power, security, etc.

When you first look at a building’s stats, you’ll see a little stopwatch showing 1 to 4 triangles. Buildings aren’t magically summoned; they take time. In a normal board game, each of those triangles might correspond to a round of construction required, but we aren’t dealing with normal time here. That stopwatch is more of an idea; the colony itself dictates how long the building will take to finish. The happiness of your colonists, the stability of your colony: These numbers affect the rate of construction. And while buildings finish at the end of a round, what round that is will depend on the numbers the app is crunching. But don’t worry, buildings can provide partial benefits while they’re under construction; think of it as finishing some apartments before the entire complex is done. 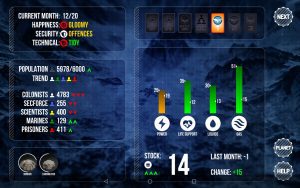 Our colonists weren’t very happy, and we were running out of energy reserves.

Two actions each and we’re done. Any buildings that finished the voting round are added to the colony using special connectors that link it to the central tower and app. The player that initiated the vote for the building also uses their player token (embedded with a smart chip) to tell the app that it was their idea. We’ll get back to that in a minute.

After the action phase, each player may try and get a decree passed. Each card has an effect that could be added to the colony, including things like a curfew, bill of rights, ration limits, etc.; each affecting the colony’s happiness, security, and tech as well as granting small bonuses. To register a decree the player need only tap the card to the main tower, then tap their player token to register who requested the decree. After all players have had a chance to do this, the tiny civilization inside the app votes based on their preferences.

Yes, you read that correctly. THE AI HUMANS IN THE APP VOTE ON THE DECREES. 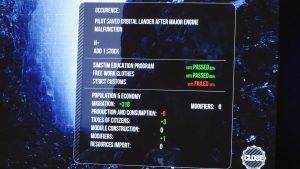 The colonists are not fans of “Strict Customs”

The population of the colony is not just some number, but a customized AI running inside. Each “person” in your colony has their own opinions and values, and will vote accordingly. But they can be swayed based on other factors, like the state of the colony and their opinion of the player. When a building is finished, the colonists remember who initiated it, using that knowledge to gain an opinion of the player. Players can also take an action to make themselves more popular and known by the colonists.

After the digital people have heard all the decrees and made a decision, the game moves to the event and upkeep phase. The app chooses from a random list of events and displays its effects for the players, informing you of how the event affected your colony’s stats. But almost nothing in this game is purely random, and even the events are determined based on your game state. For example, a sand storm event won’t trigger on your ice planet, and mass looting probably won’t trigger if your population is happy. 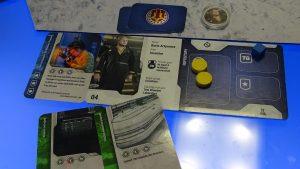 My character area. Can you see the likeness?

Below the event you’ll see the results of all the decrees. Each decree will list whether or not it passed or failed and give its vote percent. Unfortunately, you can’t talk to reporters and pollsters to know exactly why. Maybe they just don’t like your face?

Finally the app displays the upkeep of the month. This will include incoming and outgoing stock (the colony’s GDP), population increases and decreases, as well as a bunch of other numbers that won’t make much sense to you the first time you play the game.

The next month starts and you’re hit with an updated stat screen, one that normally lets you know that you’ve made everyone very unhappy. Now it’s time to fix everything you broke last month by suggesting the exact building you need to fix your new problem. After 20 months the game ends and scores are tallied, assuming the colony is still alive. 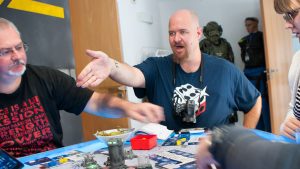 The game can really suck you in

This is just a preview, so I don’t want to go too in-depth with everything I experienced. Things are still being adjusted, tweaks being made, and I don’t want to mention something that’ll change before publication. Most of the game felt finished, but a few changes could definitely improve some of the interaction, which at times felt a little low because we were playing on an easy planet.

Overall I highly enjoyed my play of the game. The action phase is not really anything worth writing about, standard worker placement gameplay where you always feel starved for actions. But the living colony makes this game shine as something unique. I truly felt like we had the lives of these people in our hands. Each time I played a more authoritarian decree, I had to remind myself it was for the greater good. I worried for the stability of these digital people, and I tried hard to put their needs before my own. I was fully engaged from the moment we pressed Start. 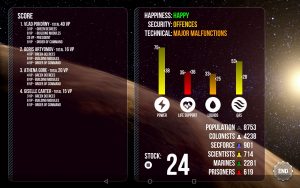 Suffice to say this is definitely something you’ll want to watch if you enjoy civilization games. The functionality of the app made my jaw drop, and the number of mechanics happening under the hood is astounding. For example, distance from buildings calculates into their efficiency, meaning you want water and air suppliers closer to buildings that use those or they’ll be less powerful. Or how a housing unit with lots of connectors might act more like a slum and give less happiness. I can’t imagine tracking all this outside an app, and I do worry that all these micro-interactions will make the game feel a bit random until players have mastered it. But the app made the colony feel real—chaotic, yet manageable.

I also want to point out that it is 100% Europe and American produced. No cheap-as-slavery Asian labor involved. Also, a full 2-year warranty required by law and customer support is listed as a key goal. I’m really happy to see any game move away from production in China, even if it does increase the cost.

In finality, we are looking at the birth of something truly amazing here, and I can’t wait to see where it takes us. 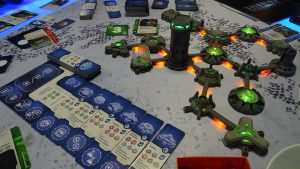