Mining can be a very profitable business if you know what you’re doing. In Miner’s Lagoon, players work on four islands to create their mining corporations and dig for gold, silver, copper, and iron.

Miner’s Lagoon is a worker placement game with a twist. At the beginning of each round, players will select one of the four islands to start on. Each of these islands has their own set of possible actions, but they all have one thing in common: a “Depart Island” spot that allows players to move from island to island. This is necessary because while Islands 3 and 4 let you work on your corporation by hiring workers and making shipments, Islands 1 and 2 are where the minerals are. You’ll need to spend some time on each island during the game to be successful, and you might not always start on the island you want, since only one player can start on each island each round.

A 3-player game in progress. By looking at the Island Selection Compass at the bottom of the board, you can see that the red and blue players have both departed their starting islands to go to Island 1, and the green player has moved from Island 1 to Island 2.

To determine your starting resources, each player is given two Corporation Cards at the beginning of the game, keeping one. From my plays, it seemed like the Corporation Cards weren’t quite even. Some cards may give you merchants, miners, and resources, while others only give you merchants and money. It became clear during the first game that starting with miners is a definite advantage and if you choose a card without any, or worse, if you aren’t dealt any cards with miners, you may struggle to catch up. Players can only purchase one miner per round and, considering this is a mining game, if you can’t mine, you can’t do much. 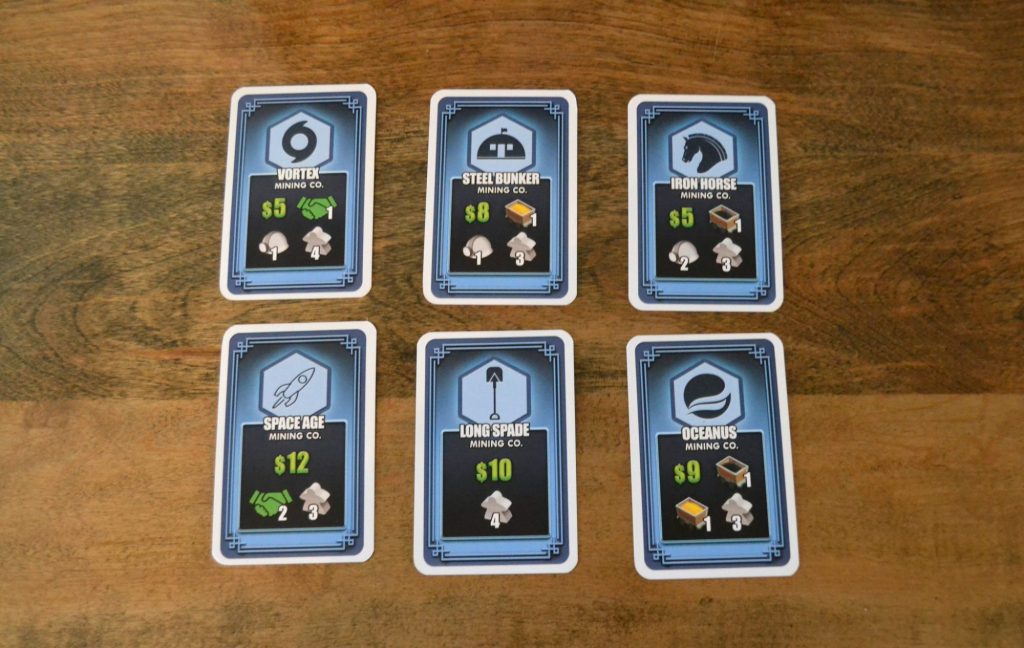 In my opinion, the top row of cards shown here are significantly better than those in the bottom row.

The game starts with six available mining “Galleries”: three on Island 1 and three on Island 2. Gallery tiles can have anywhere from four available minerals to none. And like in the real world, sometimes you can’t be sure what’s there until you actually start mining. Only two of the starting six tiles will be face up, and new tiles will be added face up or face down. When a player chooses to place new tiles by activating the “Draw & Place 2 Galleries” space, they will get to choose if they are placing the tiles face up or face down. To stop players from keeping all the tiles secret, there is an incentive for placing them face up. Players will get 2 dollars if they place one tile face up and 3 dollars if they place both face up.

I found that players in my group were most likely to go for the two dollars and place one face up. This meant that often players weren’t sure what, if anything, they’d be getting when sending a miner. For each miner you send to operate the mines, the amount of minerals you recover will potentially increase. If they are mining on the surface level (Level I) each miner can get you one resource. If they have to go underground to Level II, it takes two miners for each resource. This really makes going to an unknown Level II Gallery unappealing, but sometimes it’s your only choice.

Aside from repopulating the mines, the other way to get money is by making shipments. A shipment will ask for 2 to 4 unrefined minerals and will give you 4 to 8 dollars back. 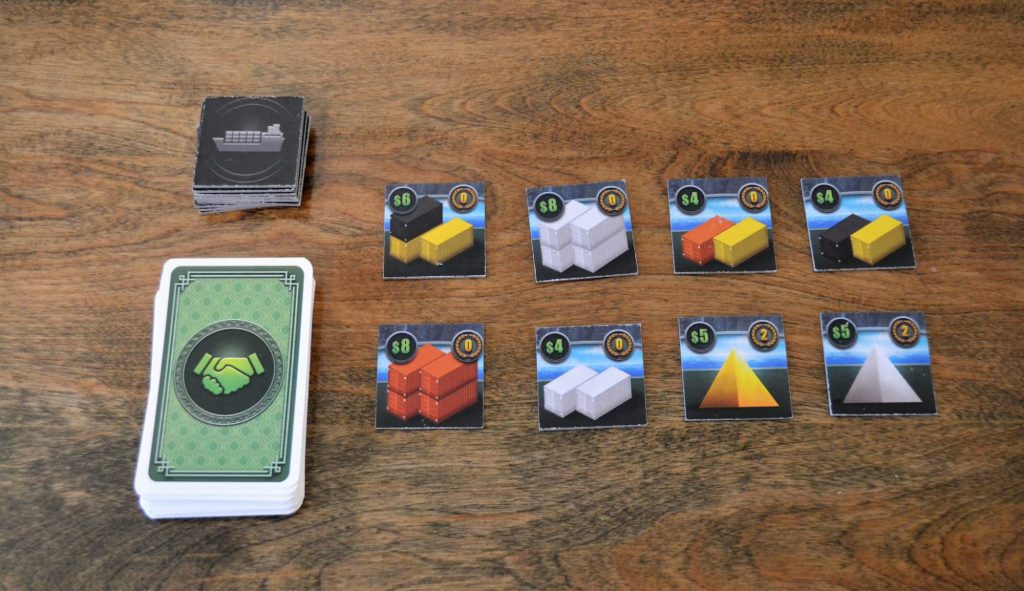 If you want your minerals to give points you’ll have to change them into something else first. One way to do this is through enriching them. Enriched minerals can be used in deals.These deals will offer some amount of points (2 to 6) depending on how difficult they are to achieve.

To get an enriched mineral back, you buy it. You pay the value of the level it is on (1-4) to the player who owns that mineral. If you own the mineral, you don’t have to pay anyone. When a player’s mineral is removed from the Enrichment Center, they get one victory point regardless of who removed it. How you keep track of who owns what resources on the board is quite clever. When putting minerals onto the Enrichment Center you pay the raw mineral to the bank and then put a cube of your colour onto the corresponding enrichment spot.

The game is played for 15 rounds, or until a player reaches 30 points. Every third round, players must pay their workers. The cost is less than in many worker placement games, only 1 dollar for each set of workers. I suppose manual labour is cheap. Other than determining whether or not it is a paying round, nothing on the board or the gameplay changes over these 15 rounds. You can, however, change your own action options by buying equipment cards. Equipment cards offer a once-per-round action that a miner can take. Often these actions will have to do with minerals, such as mining or refining them, however, that’s not all they are good for. Every equipment card will offer the player who purchases it at least 1 point. Some cards offer more points, but this is in lieu of an additional action spot.

Here’s an example of some different equipment cards. The ones with dotted circles can be activated by a miner once per round.

If the game ends due to someone hitting 30 points, it doesn’t mean that they have won. Players are given three Objective Cards at the beginning of the game, from which they get to keep two. These cards will give you endgame points based on what you accomplished during the game. Like the Corporation Cards, some of the Objective Cards are just… objectively better (see what I did there?). While one card may give a direct goal, such as 1 point for every shipment of three or more minerals, another objective might give you a less clear goal, such as have the most valuable copper. This is a little annoying because it depends not only on what you do, but on what other players do as well. It would certainly suck to spend the whole game enriching copper to constantly have other players buy it from you and foil your plans.

The other way players can get endgame points is by having artifacts. Artifacts are just another thing you can do with your minerals. Thematically I didn’t quite get why you turn minerals into artifacts, but if you have them at the end of the game you’ll get three points for each.

While I can’t talk too much about the actual components of the game since I was given a prototype copy for review purposes, there are some things worth mentioning. Different kinds of workers are differentiated by different shaped pieces. While the merchants are standard meeples, miners are represented by adorable little hard hats. Additionally, each player has a very nice boat that they use to indicate which island they are currently working on. In the pictures, you may have noticed that the board was quite large, but that was because it was a prototype. The board will be 50 cm by 50 cm and the whole game will fit inside a Splendor-sized box. The rulebook is quite clear and in most cases they provide clarification in areas of ambiguity. That wasn’t always true, but again what I was playing with was a prototype, so that may not be the case for the Kickstarter copies.

One flaw with the components is that many aren’t colour-blind accessible. This is particularly true of the mineral carts on Gallery Tiles and Objective Cards. Once you have the resources, the colour doesn’t matter since your player board has a place for each type of resource, but distinguishing what resource is in the small cart image may be challenging for some.

When I was reading the rules, I got very excited to play this game. I love when I can see elements of other games that I like in a new game. I found that Miner’s Lagoon has a few similarities to Viticulture. In Viticulture, you also choose your starting resources by selecting your starting cards. Refining your minerals is a lot like aging your wine. Finally, the deals remind me a lot of order cards. I could also see parallels to other worker placement games like Keyflower, where other players don’t prevent you from using an action, you just have to pay more. There are a lot of neat elements in this game, but for me it just was not executed correctly.

While this game has a lot of potential, I found that it was just too long. With a play time of 40 minutes per player (that’s 2 hours and 40 minutes for 4 players), it’s competing with great games like The Gallerist, Terra Mystica and even Food Chain Magnate. For a game of this length, I’d want one with a high level of complexity. Unfortunately, Miner’s Lagoon doesn’t change much during its many rounds. There are no round-based goals and, other than getting new workers and equipment cards, what you are able to do doesn’t change over the rounds. This makes it very repetitive. I imagine with enough plays, players could develop a strategy that moves it along faster, but I don’t want to play it enough to get better at it.

I would like the game a lot more if players started with more workers and it ended after 7-10 rounds. That being said, if you’re looking for a slow-paced medium strategy game, this could be for you. It’s easy to teach and for players to comprehend, and there are no changes over the rounds that players will have to remember. If you have the time to spare, you may find this a good way to transition into longer games. Personally though, this game won’t be getting a permanent spot in my collection.

A: No. While I tried to be diplomatic in the review, I really didn’t enjoy Miner’s Lagoon and promptly got rid of it once I knew I wouldn’t need anymore pictures.