In 2010, the gaming world was introduced to Hanabi, a clever game in which players can see the cards of their teammates, but not their own. Using clues provided by those players, they have to deduce what cards they’re holding and where they should go. Letter Jam shares a lot in common with Hanabi. Like Hanabi, each player has an assortment of cards that are a complete mystery. And just like Hanabi, other players will provide clues from an ever dwindling supply of clue chances based on what they are able to see in an effort to help everyone else determine just what’s on each of their cards.

Unlike Hanabi, instead of holding cards used to build up different fireworks displays, each player’s cards contain letters that, when combined, form a word that has been secretly selected by the person sitting to their left. The overall objective is for the players to utilize the limited number of clues available to them to help all of the players discover the identity of the letter cards in front of them so that they can discover their secret words. If everyone correctly figures out their words, then everyone collectively wins. If not… well, you know the drill.

If you’d like to just jump right into what I think about Letter Jam, you can skip ahead to the Thoughts section. For the rest of you…

To setup a game of Letter Jam, you first need to determine how many people will be playing as there are different setup scenarios (shown on the setup cards) for different player counts. Each card contains a certain number of guess tokens in red or green and will detail how many non-player stands should be set up and how many cards will be given to each one of these.

Before those cards are dealt out to the non-player stands, though, the deck of letter cards is shuffled and divided into like-sized piles equal to the number of players. Each player gets to take their pile and use the letters within to create a word. For an easier game, they can create a 3 or 4 letter word. For a tougher challenge, a 5 or 6 letter word will do nicely. You can go even higher if you like, but keep in mind that the longer your words are, the tougher it will be to guess them in the time allotted. The cards used to create these words are shuffled and handed, face down, to the player on their right. That person then places those cards face down in a row in front of them before putting the first letter on the left in a stand facing away from them.

Here’s the setup for a two player game.

The unused cards are placed face down in a pile within easy reach. Then the numbered clue markers are placed close by along with the wildcard. Each player is also provided a guessing sheet and a pencil to write with. And with that, you’re ready to start playing Letter Jam.

In any game where you’ve got a limited number of clues available to you, the stronger the clue that you can give, the better. However, just like in Codenames, you’re limited in the amount of information that you can give. Since this is a cooperative game, the players get to discuss who should give the next clue. Players can discuss how many letters will get used if their clue is chosen (but not which specific letters), how many non-player stands will be used (but not which specific ones), whether or not the wildcard will be used, and how many players will be helped out by the clue (but not which specific players). Once the players have agreed on who should give the clue, that person uses the clue markers to spell out their clue like this:

After the clue is given, each other player records the letters, substituting instances of the wildcard with asterisks (*) and instances of their own letter with question marks (?). Using the example above, the person receiving the clue would record the clue like this:

Using their word knowledge accumulated over a lifetime of reading board game manuals, the player would then try to figure out what the clue was supposed to be based on the information given. In this instance, the best thing they could do would be to replace the ?s with letters to see if anything looked familiar…

They could keep on going, but it’s pretty obvious at this point that the clue was the word ‘SPECIES’ and that the unknown letter is the letter ‘E’.

Bear This In Mind…

Each player WILL be required to give out clues eventually; the setup card demands it! Each time a clue is given, a guess token is removed from the setup card. Before any of the green tokens can be removed by the player, that player must have first removed a certain number of red tokens. And to top that off, before any of the tokens that are not on the leaves can be removed, all of the red tokens must be removed first.

In a two player game (the card pictured above) each player must remove 3 red tokens before they can begin removing green tokens. That means that one player could provide a total of 5 clues in a row (their three red tokens + the two leaf tokens) before the other person would be forced to start giving clues. But there are other guess tokens to be unlocked as well. Each time the cards run out in one of the non-player stands, an additional guess token is unlocked and placed onto an empty leaf spot.

As long as the revealed word is a recognizable word, then you have succeeded whether or not the word you created was the same as the word your opponent gave you.

Even though Letter Jam doesn’t have a lot of flashy graphics, the components are all of top notch quality and I would expect nothing less from a game published by Czech Games Edition. Of particular note are the poker chip-like clue markers. They’re made of thick plastic and have a nice heft to them. Each one is even illustrated to look like a piece of fruit.

And that, folks, is the only time you will ever see anything that has anything at all to do with jellies or jams in this game. I have no idea why the game is called Letter Jam. If I thought that Codenames was a bit weak thematically, it is absolutely dripping with theme compared to this game. Thankfully, that doesn’t detract from the game play at all.

Letter Jam is an extremely challenging puzzle that constantly keeps you on your toes. Where you might be tempted to think that the key to doing well at this game is to make good guesses, you would be wrong. This game is made or broken on the clues. The more letters a clue can use and the more often it can use those letters, the more effective that clue will be. Any clue that doesn’t turn down a letter and reveal a new one is wasted effort, so the clue givers have got to be very careful to avoid giving clues that could have multiple solutions. Is M*?SE supposed to be MOOSE or MOUSE or MANSE?  That’s a lot of different possibilities and a lot of guess tokens wasted. A better clue might be M*?SSE. That extra ‘S’ makes all the difference.

The game has a nice pacing to it, too. At first, things feel relaxed and leisurely but as your little well of guess tokens begins to run dry, you suddenly realize that you’ve got 2 unguessed letters sitting in front of you, 3 in front of your teammate, and only 2 or 3 clues left! Things start to get very frenetic and strategic then as you find yourself racing against the clock. Several games I’ve played have ended with a Hail Mary guess. Some ended in glorious victory and others in abject defeat. 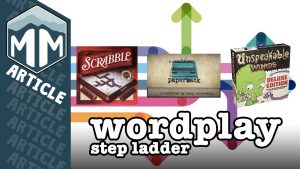 If wordplay is your jam, then check out our Wordplay Board Game Step Ladder for more great suggestions.

The real hallmark of Letter Jam, though, is that regardless of which ending you get, you always want to go back and do it some more. Like Codenames, it’s a fun, easy, palatable game that’s just quick enough to be enticing. Letter Jam’s been described as “Hanabi meets Scrabble” and that seems about right to me. Whether it’ll stay sweet forever or turn out to be a lemon (curd), I’m not sure. All I know is that for the here and now, Letter Jam’s definitely got a place at my table.