As most card games and the cliché go, you can only play the cards you’re dealt. But what if you don’t know what those cards are? In that case, you’d be playing Hanabi.

Hanabi is the Japanese word for fireworks, and the goal of this cooperative game is to construct five different sequences of fireworks by playing the appropriate cards in order. The deck contains five suits, each represented by a different color. Each suit has 10 cards – three 1s, two 2s, 3s, and 4s, and a lone 5.  Shuffle the deck and deal four or five cards to each player (depending on how many people are playing). It all sounds easy enough.

Now comes the beginning of the hard part: don’t look at your cards. Rather, pick them up facing away from yourself. You will mess this up your first time. It’s counterintuitive. When you do look at your cards, scrap that deal, shuffle and re-deal as your friends remind you that picking up your hand is still the easy part of the game.

The person with the most colorful outfit starts the game. On each player’s turn, they choose one of three options:

When giving a clue, you will spend one clock token to tell one person one aspect about their hand, either ALL of the cards that match one color or ALL of the cards that match one number. The recipient of the clue should remember that detail, and may hold designated cards sideways, move them to one end of their hand, or use whatever gimmick they’d like to remember, so long as they don’t look at the cards’ faces. Remembering details about cards is crucial. We recommend using something like Gamestaxx’s Uberstax! Check out the honorable mentions to see them in action! 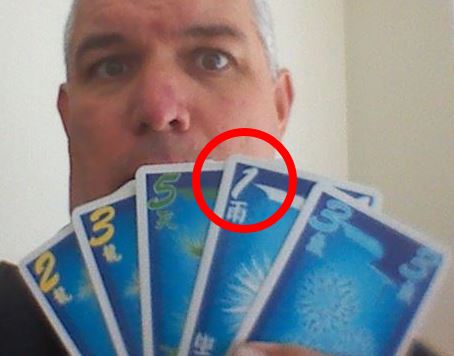 Why not distribute clues until everyone knows exactly what they have? Because there’s a limited supply of clock tokens – eight. It seems like a lot when you first start, but they disappear quickly. The only way to return a clock token to the supply is by discarding a card. Ideally, if you have a card that you know won’t play (like a copy of an already played card), you want to discard that. Realistically, you will discard blind sometimes, hopefully not a 5, and not a play card. In my group, the current player announces “Discard” so there’s no confusion whether they’re trying to play a firework or regain a clue. Similarly, they announce “Play” when that’s their choice. Once you discard, take one card from the draw deck and make sure it faces away from you. I can’t stress that enough. No lookey. 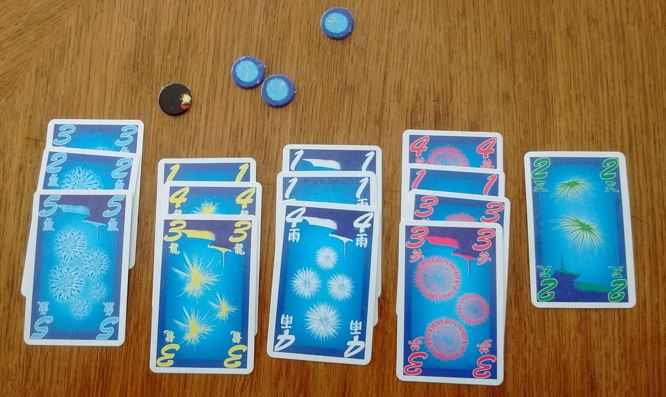 Discards are open information and can and should be tracked so everyone knows what cards are already out. If one yellow 3 is already discarded, you want to make sure the player holding the only other one doesn’t accidentally dump it. It’s harder to inform that person when they have multiple yellow cards or multiple 3s, but there’s a flow to the game that evolves nicely. 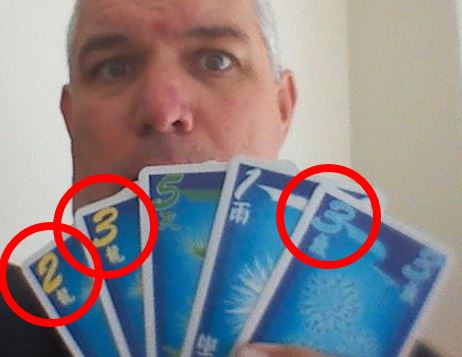 These are yellow, or 3s

If you want to play a card on your turn, announce “Play” and flip your card face up. If it is the next highest number of a color – each suit starts with 1 and builds up to 5 – congratulations! Add it to that color’s pile and refill your hand.  If that card played was a 5 and completes a color, you get the added bonus of an additional clue!

If you play an illegal card – either a repeat of one already laid or one that skips a number – you light the fuse. If your fuse gets lit three times, all the gunpowder you’d hoped to use in your beautiful firework display ignites and your game blows up. Chalk it up as a loss and try again.

Another ending of the game occurs if you run out of your draw deck. When the last card is taken from the draw deck, each player will take one last turn to hopefully increase the score. To tally that score, add the highest cards from each of the five colors. Ranks are provided in the rules, but anything 16 and up is impressive. 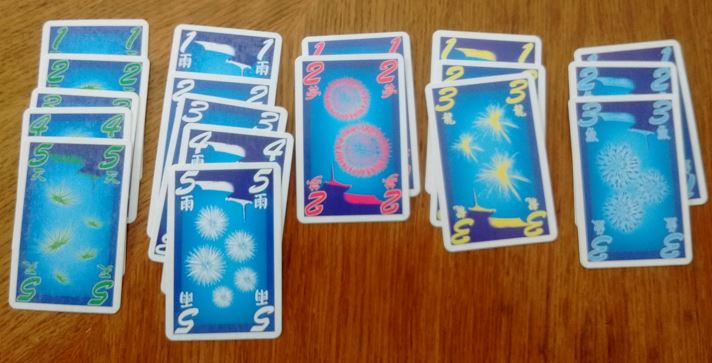 A score of 25 is a perfect game!  According to the rankings, “you are legendary, leaving everyone speechless with stars in their eyes!”

Hanabi is addictive and plays quickly once you learn the language. Different groups will try different gimmicks – for example, always discarding from one side of their hand unless clued otherwise – but you’re not supposed to game the game. Don’t stress words when providing a clue “THIS CARD IS YELLOW!” and then whisper “this one happens to be yellow.” No making faces to encourage or discourage when someone touches a card to play or dump. No telling someone else which other player should get a clue. No hand signals or head nods. No cocktail waitresses from James Bond movies carrying reflective silver trays to let you see your own cards.