As I sit here writing this article, fondly remembering the Christmas holidays, I am reminded that, for me, the best thing about holidays in general is having an opportunity to spend quality time with my friends and family. I’m certain that most people probably feel the same way; and that time of togetherness presents board gamers with a unique opportunity – a chance to share our passion with those we care about the most.

But finding the right game can be hard (although we do have some recommendations for you). Chances are that most of your family hasn’t played a board game outside of games like Monopoly or Risk. The challenge is to find a game that is not only easily accessible to board gaming newcomers, but also outside the norms that they are already familiar with. The ideal game will not only challenge the players involved, but will also foster a sense of fun and kinship as well as accommodate a large number of people. And that is why I propose that Codenames XXL is the perfect holiday game.

For any of you unfamiliar with Codenames, I’ll give you a quick rundown of how the game is played. First, the players split up into teams – a red team and a blue team – and each team chooses a spymaster (a.k.a. – “clue giver”) to represent their team. In front of the non-clue givers is an array of cards similar to this:

On the other side of the table, the clue givers will be overlooking the card array as well as looking at a clue card similar to the one in the following image:

On their turn, each clue giver will look over the cards that they are trying to get their team to guess and will come up with a single word clue to try to bind them all together. This clue is then followed by a number which represents how many cards in the array could correspond to the clue that was just given. For instance, maybe there is a card with the word “scrub” on it and another with the word “scalpel”. Your clue giver might provide you with the following clue: “Surgeon: 2”. If your team guesses a word successfully, a success card of your team’s color is placed on top of it. If they manage to guess both cards, then they get one optional free guess. This is useful for picking up other cards that might have been missed from earlier clues.

The tricky part is that beyond giving the clues, the clue givers are not allowed to communicate with their teams in any other way. If their team members have already guessed a previously missed clue or the other team has, they are left completely in the dark. And this is what makes Codenames so much fun. The limited information means that the team members are always on their toes and the excitement as one team is getting closer to the finish is palpable because it puts a lot of pressure on the losing team to come up with some amazing clue to tie together as many disparate words as possible if they even have a hope of catching up. I mean, just try tying together the words “airplane”, “caboose”, “donkey”, and “window” with a single clue. It isn’t easy! Maybe “Rear: 4” would get the job done.

There are a few rules minutiae I didn’t go over here, but hopefully you get the gist.

Functionally, there is no difference between Codenames and Codenames XXL. They all contain the exact same cards and the rules of play are exactly the same. So why do I recommend Codenames XXL over its smaller counterpart? The answer is: inclusivity. To better illustrate my meaning, consider this photo: 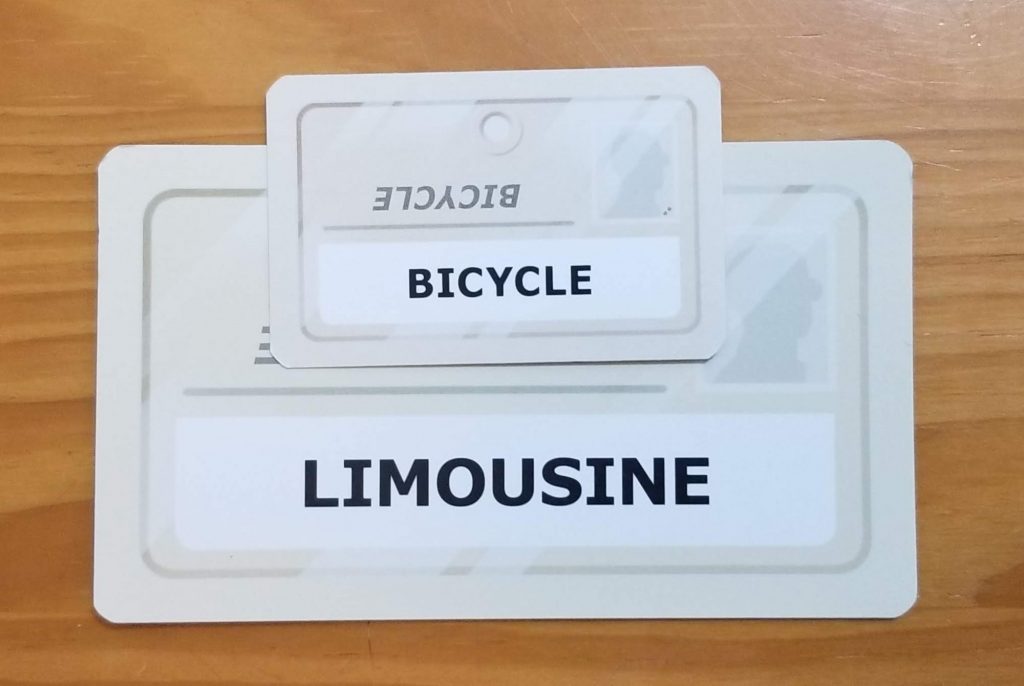 The cards for Codenames XXL are noticeably larger than the cards for the non-XXL version of the game. Codenames is the kind of game that can handle as many people as you want to throw at it. In my various plays of Codenames at different conventions, the teams grew to be pretty sizeable with 10+ per team. In a game of 6 people, the small card size didn’t create any difficulties as they were right there within easy reach of everyone involved. But as the team sizes swelled, it became increasingly more and more difficult for people to view the playing area without craning over each other’s shoulders and stepping on one another’s feet. By simply increasing the size of the clue cards, Codenames XXL alleviates most of these issues.

Not only does the increased size help the game to accommodate a greater amount of people, but also more types of people. With large teams, it can be easy for certain people to become largely excluded from the game proceedings. For instance, if you are unable to stand for long periods of time or if your eyesight isn’t that great, playing the original version of Codenames may have been a no-go for you. Maybe the enjoyment derived from the game just isn’t enough to offset the physical strain on your body. If that’s you, then Codenames XXL might be just what you’re looking for. The cards and text are very large and much easier to see.

As I stated before, Codenames XXL is functionally the same as the original version of the game. However the original game does have one slight advantage over Codenames XXL and it’s something you might want to consider if you’re trying to choose between the two.

There’s a pretty hefty price gap. The original version of Codenames usually sells for around $15. Codenames XXL is typically more than twice as expensive. So, if you’re penny pinching, this XXL version may not be for you.

It IS for me, though. I have enjoyed my time with Codenames XXL. It gives me great satisfaction looking across the table at my friends and family as they’re deep in contemplation and dialogue trying to parse out the meaning of the clue that I have given them. More than anything, it fills me with joy knowing that they’re not just playing a game to appease me, but they’re playing it because they’re actually having fun and enjoying themselves. And, in the end, that’s what it’s all about, right?