Heroes Welcome Review – Working Both Sides of the Fence

One of my favorite set of books growing up was the Myth-Adventures series by Robert Asprin. They detailed the trials and tribulations of The Great Skeeve and his ensemble cast of friends like Aahz the demon (conniving but loyal), Chumley the Troll (intelligent, and gentle), Gus the Gargoyle (the strong silent type), Guido & Nunzio the mobsters, and their boss Don Bruce (the fairy Godfather). The books were short, but they were packed with comedy, action, hard bargaining, and lots of magic.

Heroes Welcome from designer Marc LeBlanc (of Monkey Jump Games) and publisher Eduardo Baraf (from Pencil First Games, designers of Herbaceous and Sunset Over Water) have created a world that feels like that of Myth Adventures; where tropes are less important than cold hard cash, laughter often comes at the point of a sword, and a sucker is born (or hatched) every day. 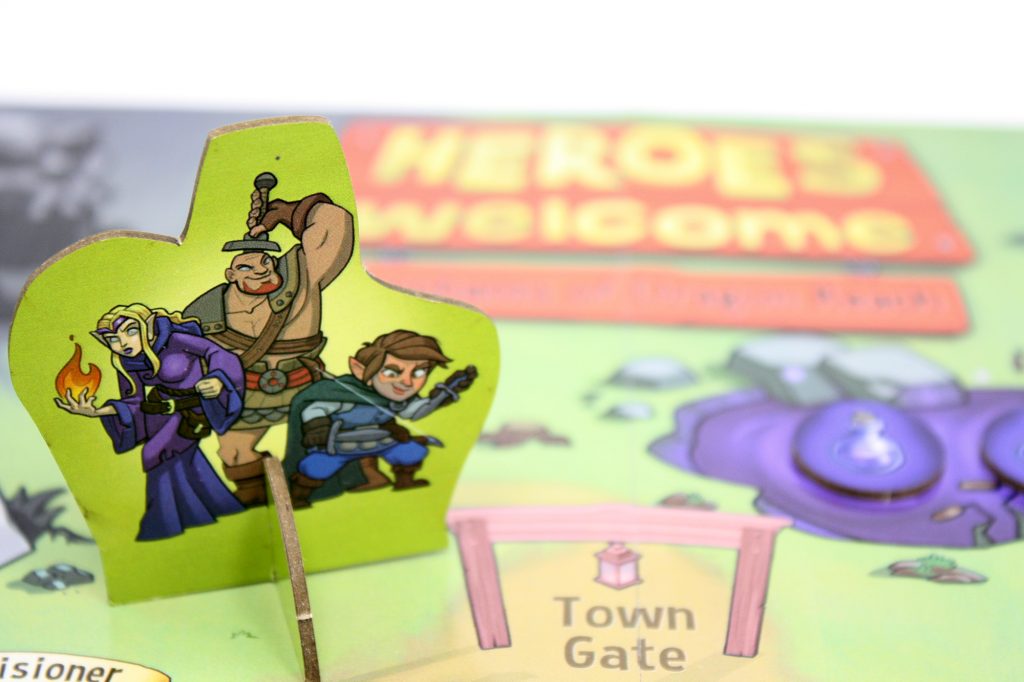 In Heroes Welcome players will take the role of merchants in a town situated nearby a dangerous dungeon overflowing with all manner of dangerous creatures. Your livelihood depends on two things: Heroes coming in to purchase supplies and sell treasure from the dungeon, and monsters from the dungeon coming in to buy weapons made from salvaged parts? of the very magical items you bought from the Heroes. You’re so jaded that you don’t even see the Heroes as people, just backpacks filled with items you can buy to fund the next weapon for the monsters. 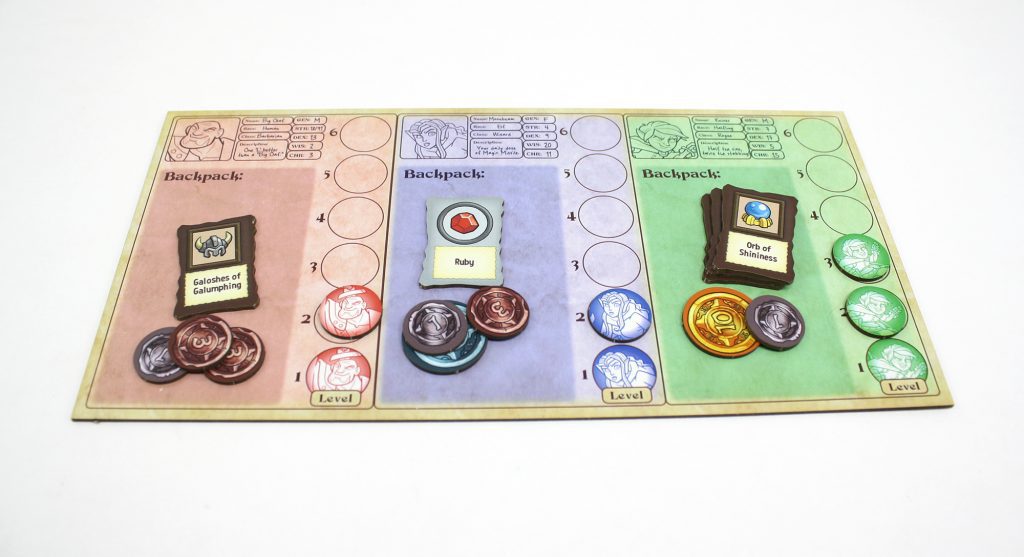 The Heroes and their backpacks

Being the middleman is a good life right? It’s just all in a day’s work for the Merchants of Dragon’s Reach.

During the game players will be buying magical items from adventurers and making new magical items to sell to local monsters for “vorpal points”. The town is expanding and it’s up to you and the local guilds to oversee the growth and make sure that things…work out in your favor. You’ll be crafting magical items, building new shops, brewing potions, and of course making lots and lots of money. It’s an endless cycle, but it works out pretty well for the merchants.

There’s a lot going on in this game, so I’m only going to give a high-level overview.. 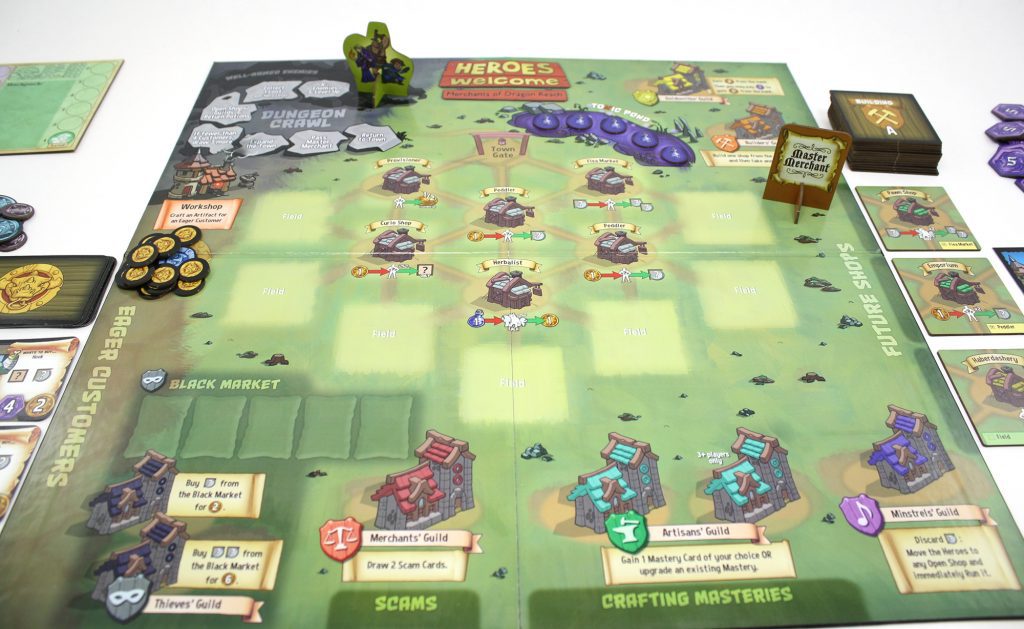 Starting with the Master Merchant, players begin the round by playing through the Town Phase.

During the Town Phase players have the choice of a few actions: Running a Shop, Visiting a Guildhall, or Crafting for a Customer. Each Shop and Guildhall space will be marked with a closed sign and can only be used once per round, so it’s first come first served. 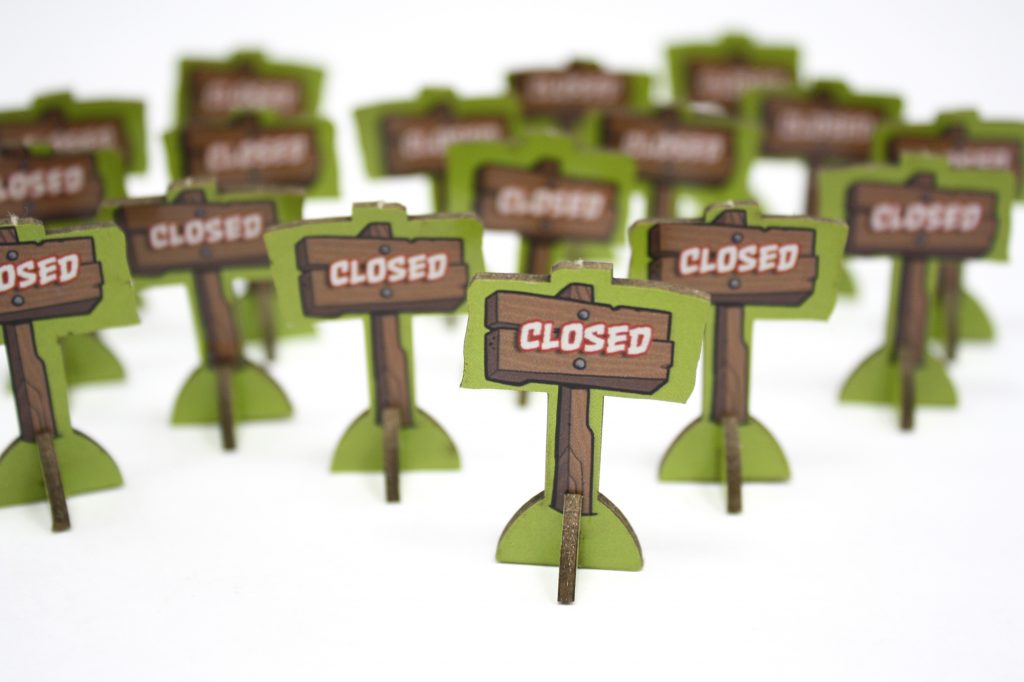 Players guide the Heroes to various shops in town and activate the action stated there. This generally involves purchasing magical items from the Heroes for money, selling them potions for money, or taking money from them in exchange for provisions. This is the main way players will earn money to take other actions. 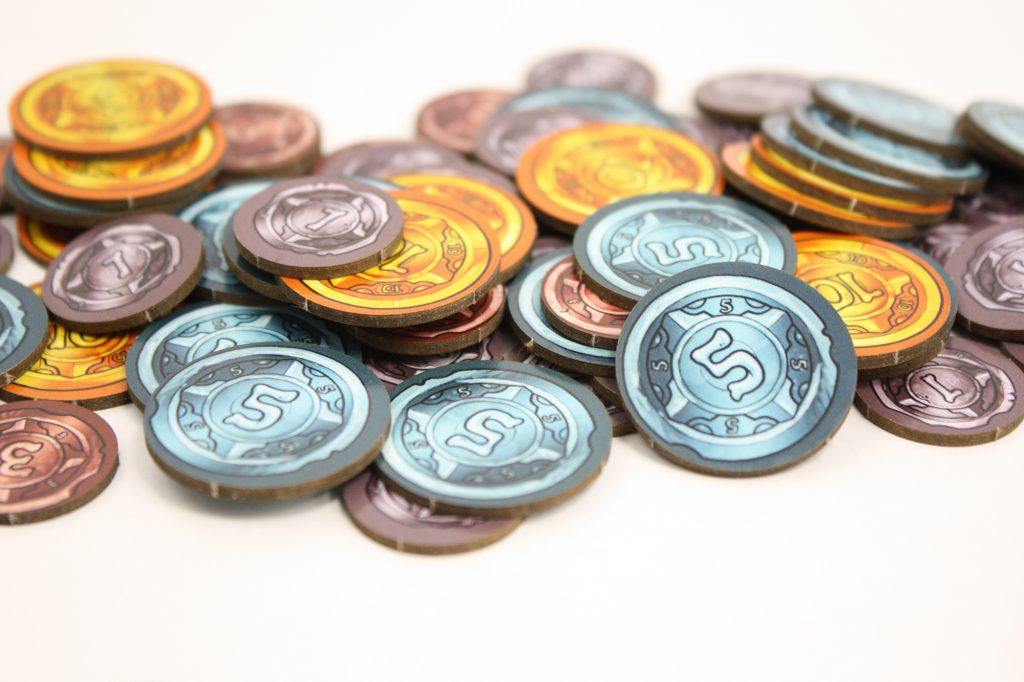 The guildhalls located at the outskirts of town allow players to construct new buildings, get a quick infusion of cash, improve their crafting abilities, collect scam cards which provide rule breaking abilities, and buy magical items on the black market. 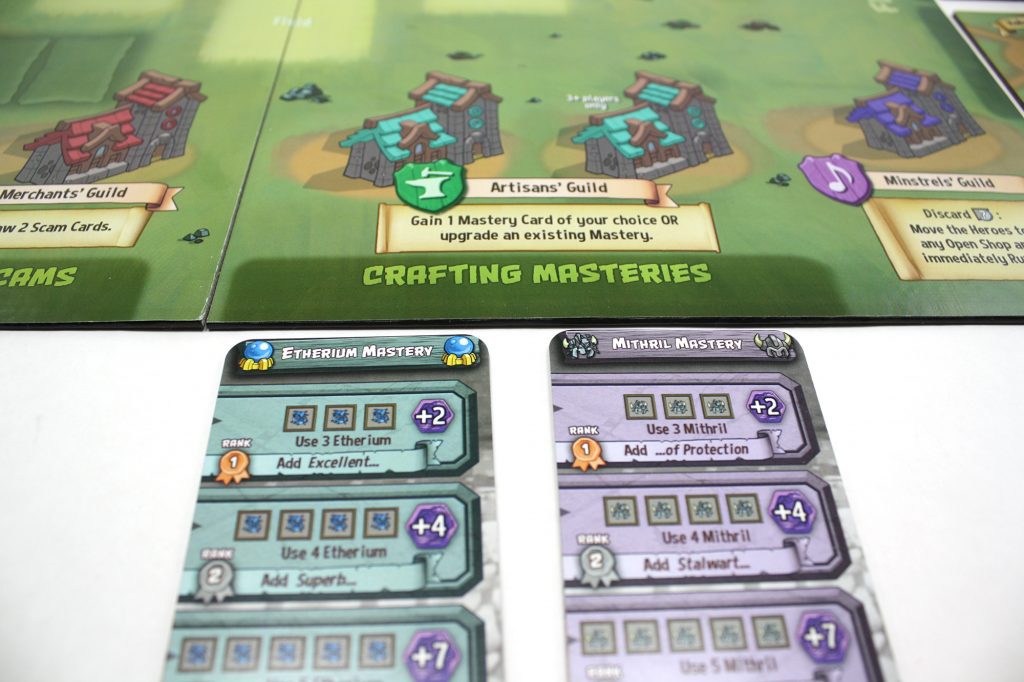 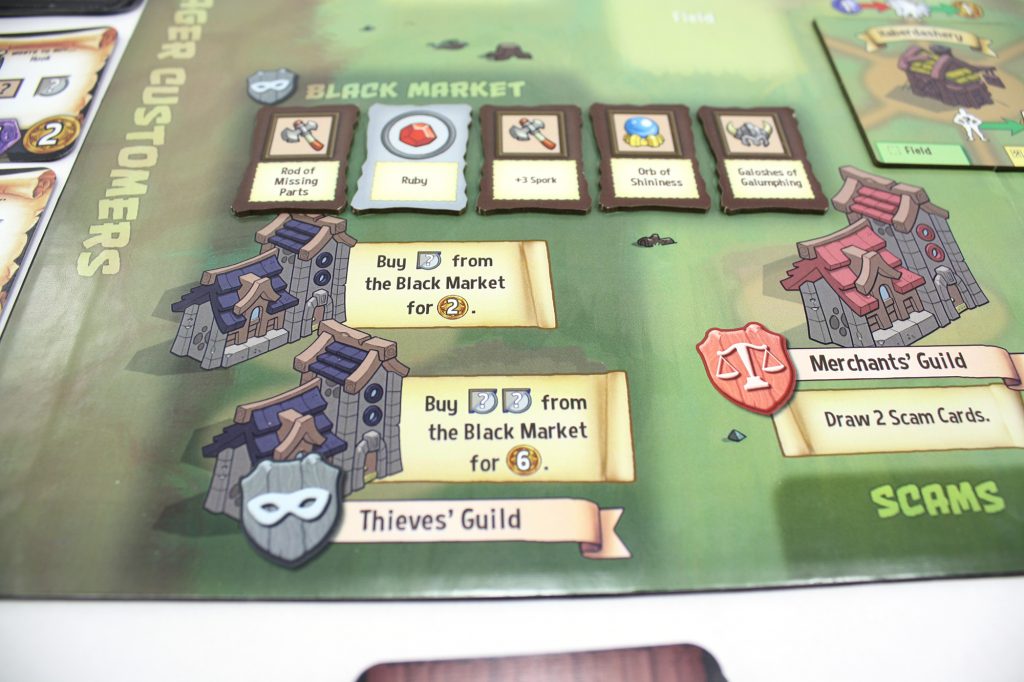 The Black Market – pick up a few raw materials, on the down low of course. 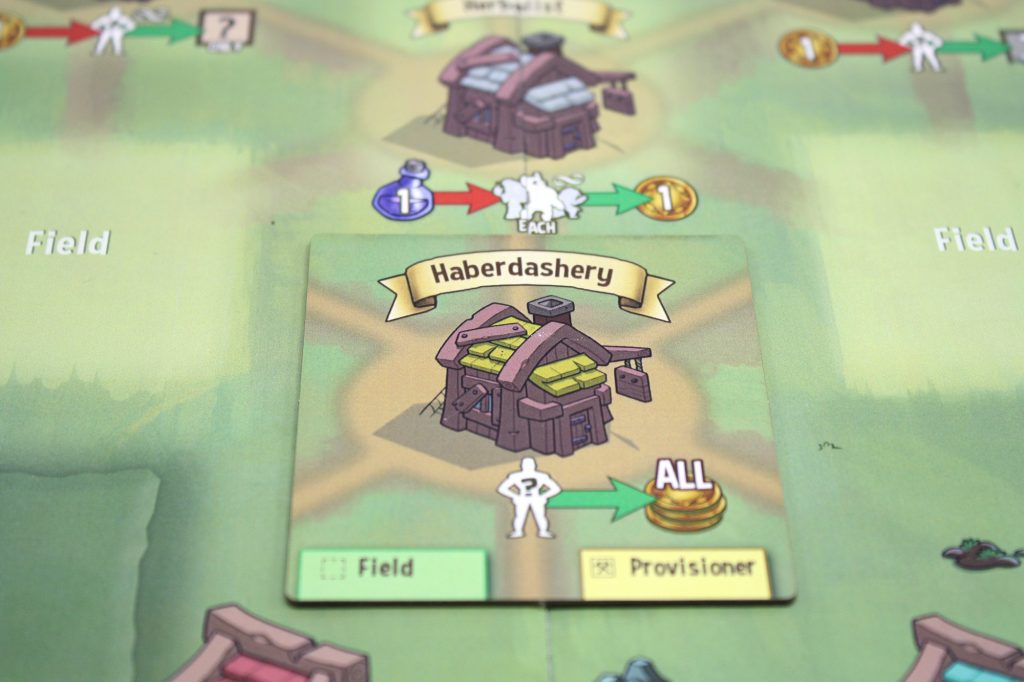 New buildings give you more options for fleecing serving the customers.

Crafting for a Customer

After sufficient magical items are collected, players can convert those items into the raw materials to make new items for eager customers (the monsters) in the Workshop. Select a customer from the lineup on the left side of the board, pay the cost in materials, and gain that amount of sweet sweet vorpal points. The eager customer then heads off to the dungeon where they’ll await the unsuspecting Heroes in the Dungeon Crawl phase. 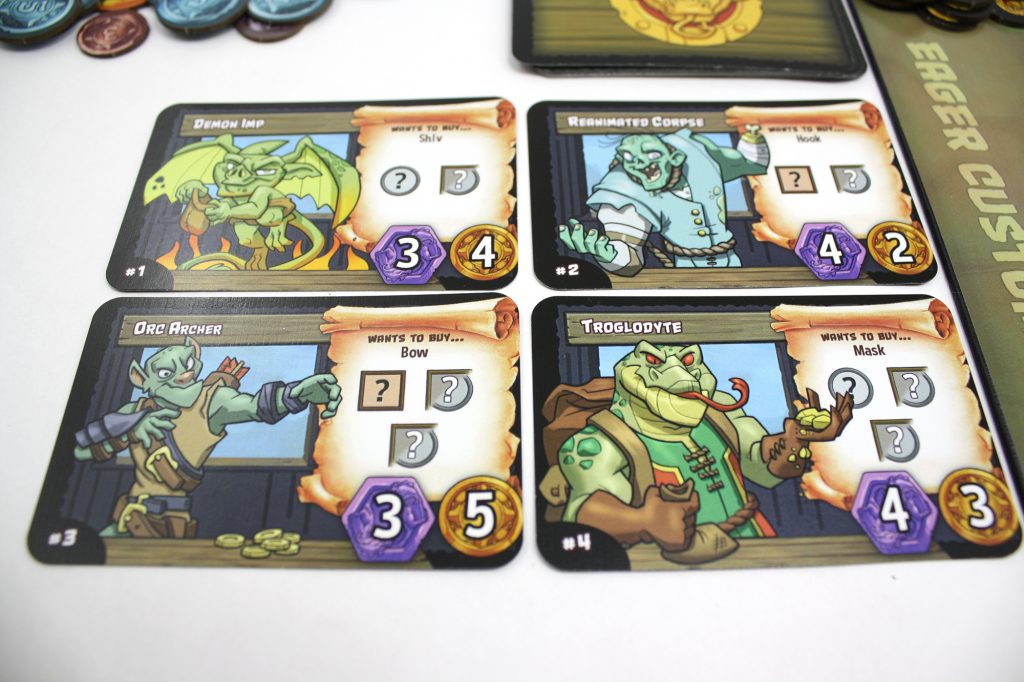 Eager customers (monsters), waiting to buy goods from your establishment. 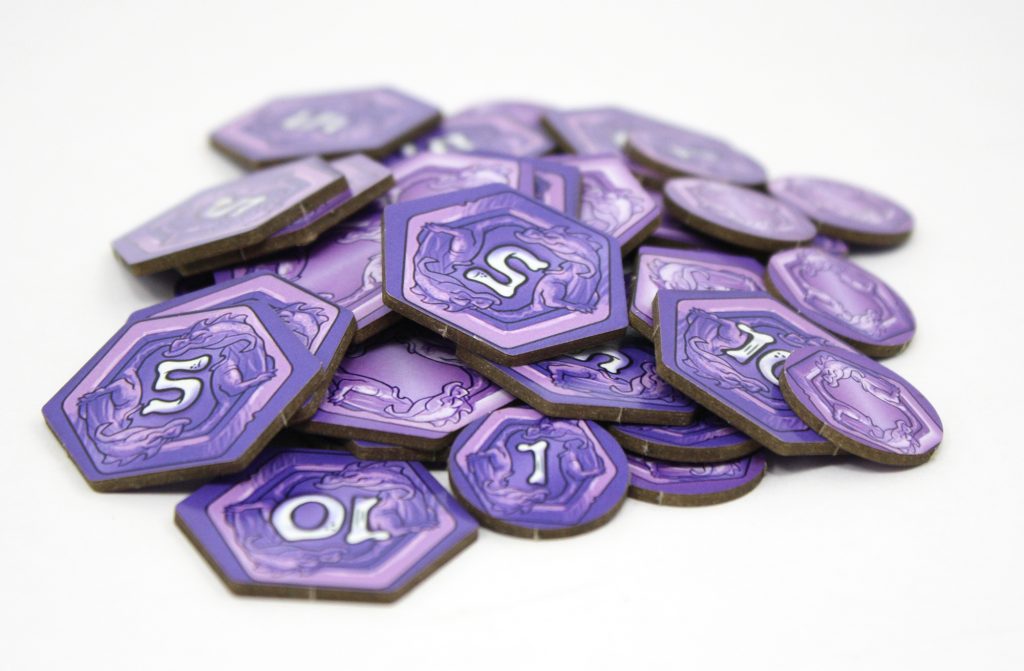 Calling for the End of the Round

At some point during the round a player can decide the Heroes are ready to head back into the dungeon. Other players can choose to prevent this by offering a bribe in for the form of one magical item. If no bribes are offered, the Heroes begin the Dungeon Crawl phase.

Don’t get your hopes up here folks. Although the this round is called Dungeon Crawl, no dungeons are actually crawled. Instead players follow the steps printed on the board and give magical items to the Heroes (loot drawn from the treasure bag), reset the board state, expand the town, and transfer the first player marker. Once the steps for the Dungeon Crawl are complete the Heroes come back to town and the entire process repeats itself. 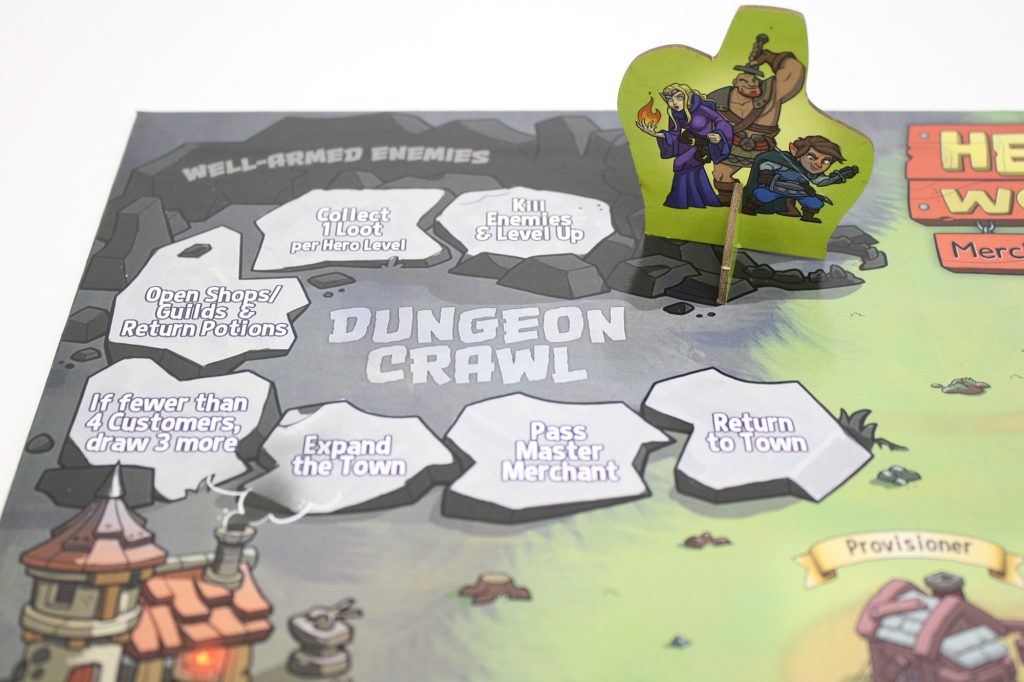 Play continues to rotate between the Town Phases and Dungeon Crawls until the final boss ends up in the dungeon, at which point the game is over. 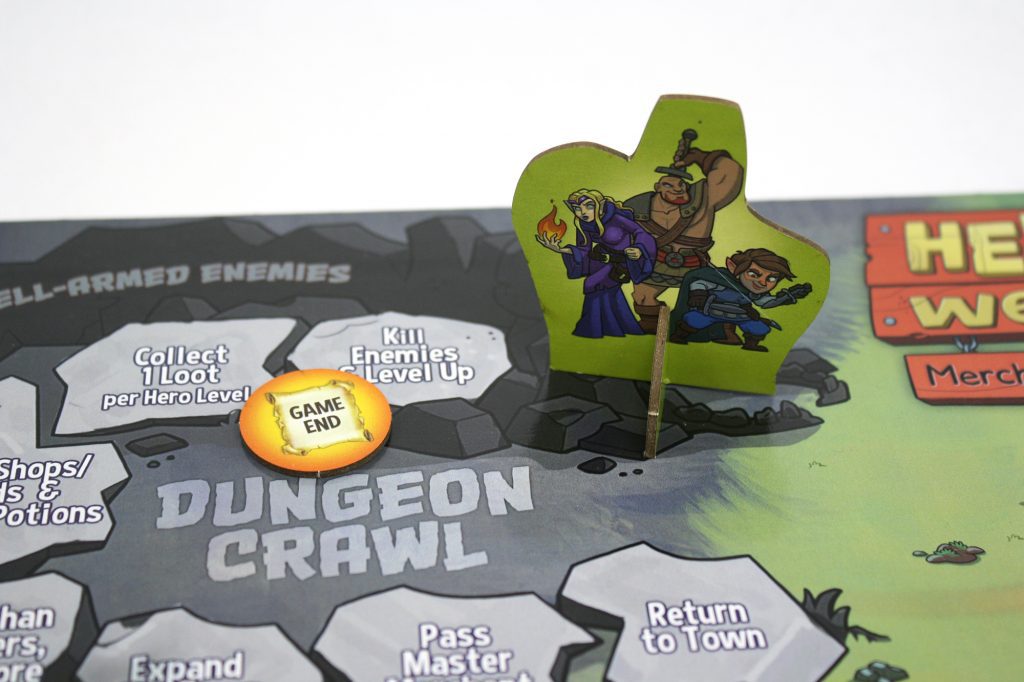 I love the theme of Heroes Welcome! It flips traditional fantasy games on their ears, allowing players to act as the middlemen between monsters and Heroes. Knowing that I’m buying magical items from the Heroes only to turn around and make more magical items for the monsters gives me the giggles. I can imagine the sly look on my merchant’s face as she sells the Helm to the Dragon, or an Axe to the Orc Warrior.

I love the artwork for Heroes Welcome. The illustrations from Thomas Denmark and Dustin Foust are super slick, professional, and just begging to be turned into a Saturday Morning Cartoon (Heroes Welcome is certainly a show I’d watch). As mentioned previously this game reminds me of the Myth Adventures series, in part because of the similarities between the characters in this game and the illustrations from Myth Adventures artist Phil Foglio. There’s just enough detail in the drawings to make them interesting, but not enough to muddy them up. 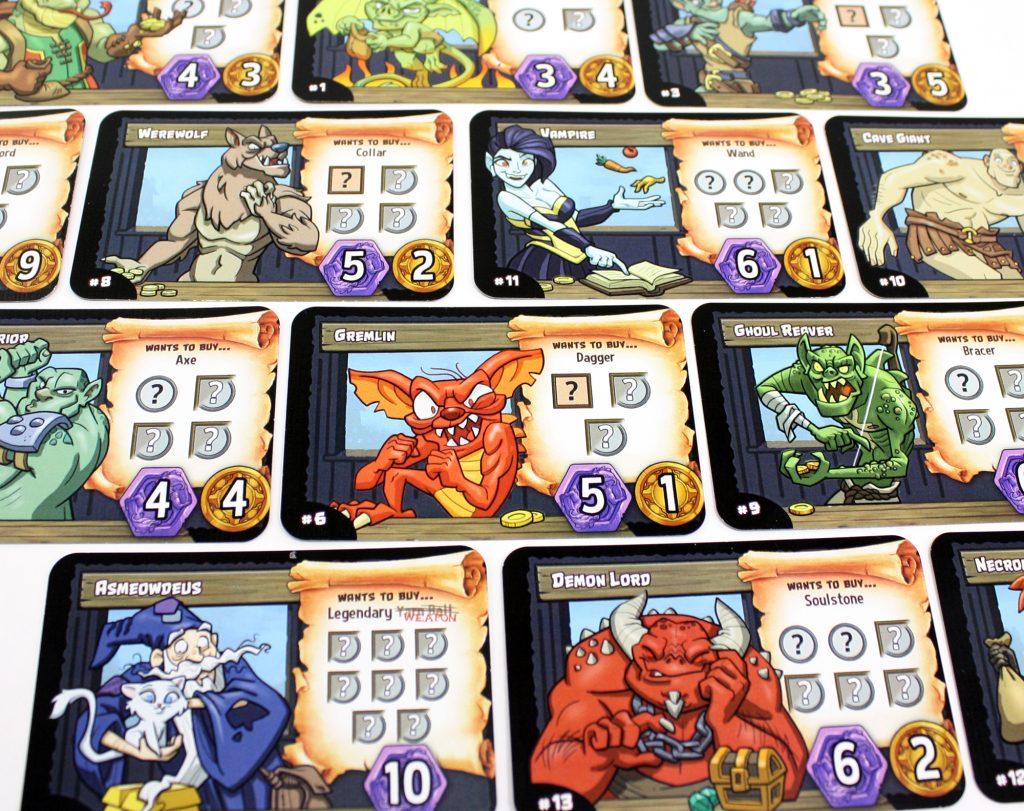 The graphic design from Benjamin Shulman really solidifies the package. The rulebook itself is well laid out with loads of examples, callout boxes, and iconography. The vorpal point and coin tokens look amazing. The color choices are fantastic, they really pop out on the table.

The thing about Heroes Welcome that really makes this game shine is the cleverness. There’s so many interesting things going on here that are just neatly done. In no particular order:

Heroes Welcome is a worker placement game with only a single shared worker. Because of this you’re constantly having to decide when to move the Heroes to a shop, or when to choose a guildhall. Wait too long and you might not get the chance to upgrade your crafting abilities, or collect gold for your next round of purchases.

The Dungeon Crawl steps are printed on the board, and a great way to get players to remember all the steps towards resetting for the next round.

The backs of the monster tokens which are sent to the dungeon get flipped over after being defeated and become level bumps for the Heroes. Not only clever, but thematic.

When selling potions to the adventurers you’re simply going to the “Tonic Pond” and filling up bottles. 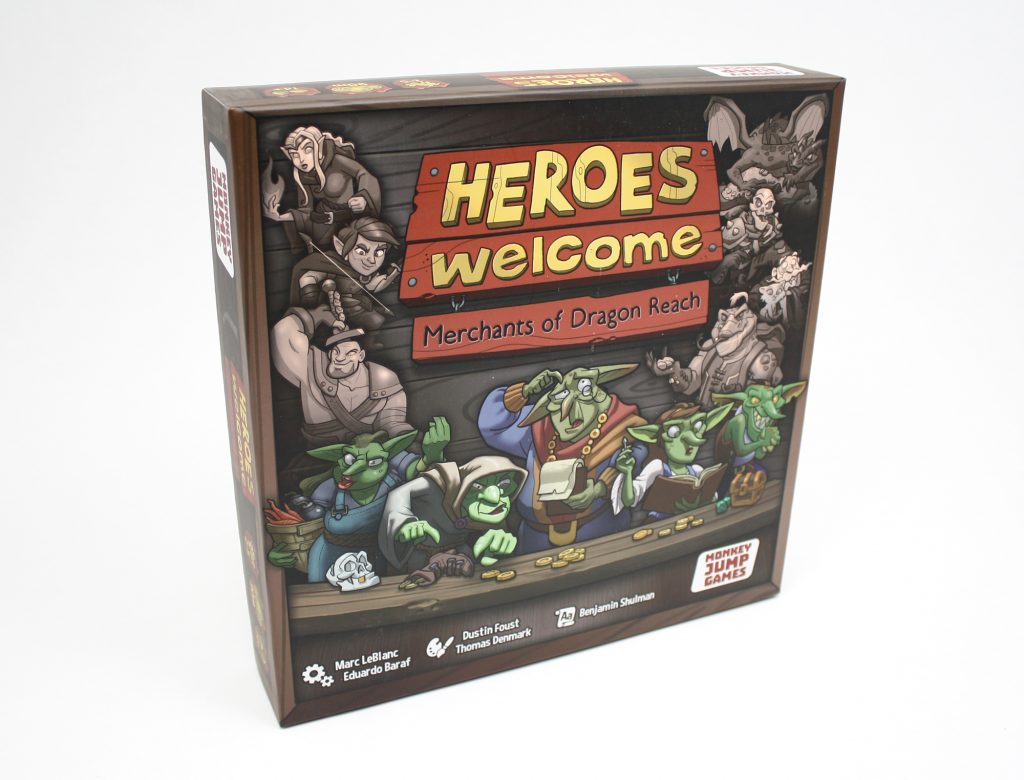 Every game has some hiccups. Even though Heroes Welcome has been kicking around for at least a year, it’s still got a bit of tightening up to do.

My first game of Heroes Welcome was a bit tough. It can be hard going into a game not already knowing how to play. Thanks to my friend Mike we powered through the rulebook and made it through to the end. What felt like a tough set of rules, really made more sense once the game started moving. The rulebook as it stands right now has loads of examples, and is really easy to read individual pages, but could use some rearranging.

Players need to collect sets of specific types of treasure (metal or shards) to be able to construct weapons for the monsters. The iconography on the treasure tokens and monster cards looks great, but is a bit unclear. The publisher has indicated they’ll be doing a refresh on that part to add clarity, but I haven’t seen the updated assets.

There’s a fair bit of fiddliness with the components. Players are constantly swapping out money, vorpal points, treasure tokens, cards, closed signs, and more. This isn’t a big deal for me, but this could be an issue for some.

Heroes Welcome is a tight and clever game filled with lots of fun decisions. It’s not every day you get to swindle a dragon and an orc before lunchtime…so that’s checked off my bucket list. Heroes Welcome will already be on Kickstarter by the time you read this review. So take a few minutes to head over the the campaign page, back the game, and be well on your way to becoming the Master Merchant. 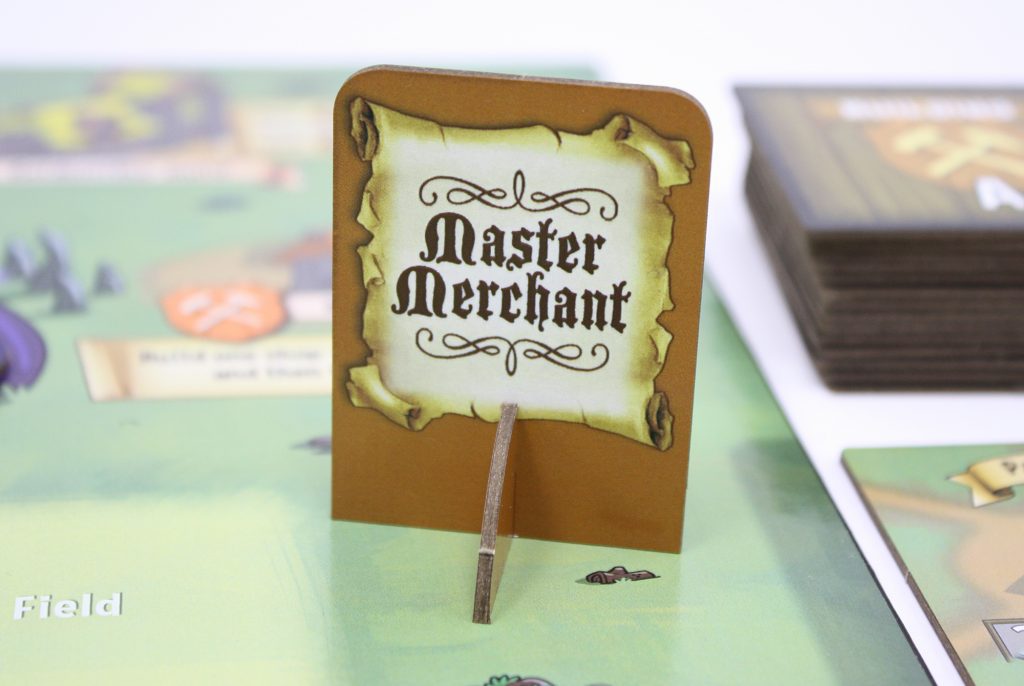