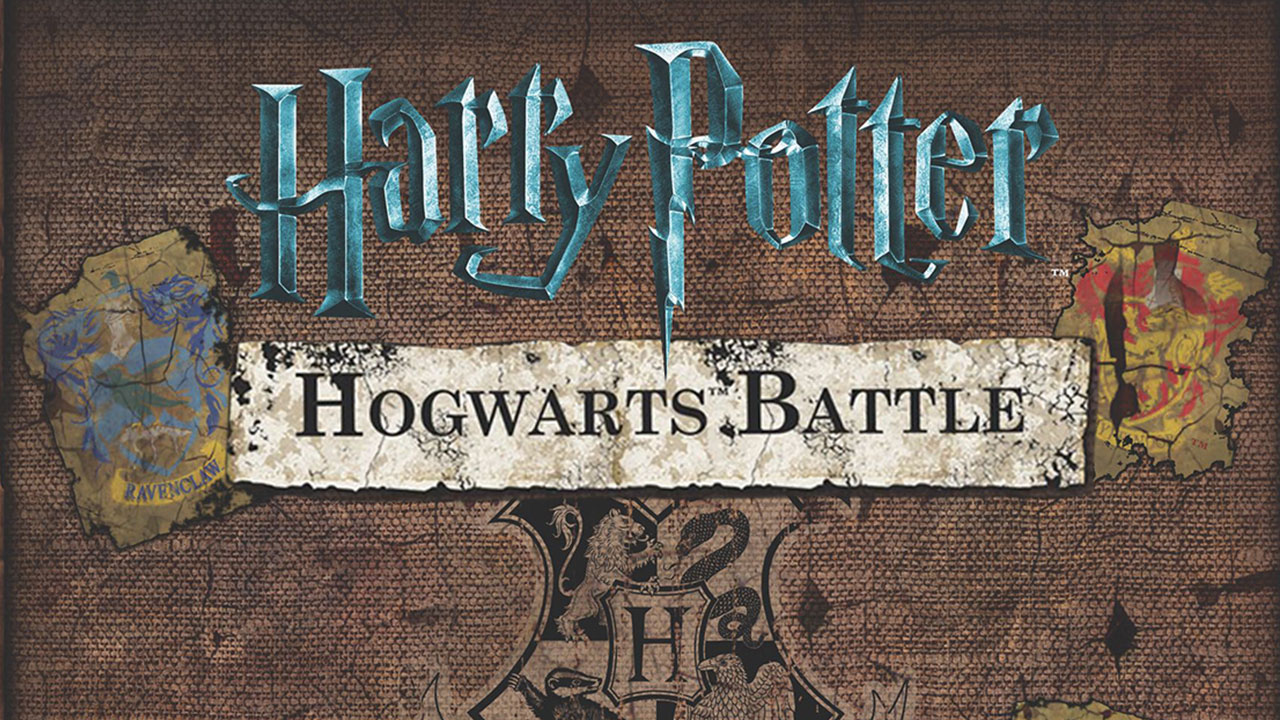 Read our review of Harry Potter: Hogwarts Battle to decide whether or not you want to take on You-Know-Who.

The world of Harry Potter has always meant a lot to me. I grew up reading the books, anxiously awaiting the next one and guessing what might happen. And while the story is over, I’m always happy to revisit it. This is why I was so excited when I learned about Harry Potter: Hogwarts Battle. Through deck building, this game lets you play out years 1 through 7 as your favourite main character, working to defeat the Death Eaters and You-Know-Who.

Before we get too far into this review, I’d like to make a quick statement. While I love the world of Harry Potter deeply, I do not condone or agree with the hateful messages Rowling is perpetuating. I struggled personally with whether or not reviewing a game based on a world created by Rowling was okay. Honestly, I’m still not sure of the answer, but reading trans activist and actor Nicole Maines explanation of why she is still a “Harry Potter” fan despite Rowling’s transphobic comments helped me come to terms with my own feelings on the subject.

In Harry Potter: Hogwarts Battle, 2-4 players take on the roles of Harry, Ron, Hermione and poor, sweet Neville Longbottom. This cooperative deck builder has 7 unique setups and rulesets, each representing one of the 7 years of the Harry Potter series. These setups are referred to as “Games”. Each Game adds something new to the last, and the new components and rules for each Game are stored in their own tuckbox. Regardless of the Game, players will be building their deck as they learn new spells and gain allies. Players will work cooperatively to defeat villains. Much like how the challenges that these young wizards face become increasingly more difficult as they get older, the next Game adds in more challenges each year.

Game 1 is meant as an introduction to deck building. This is great because it makes the game approachable for fans who are buying it because of the franchise, but who may not know much about board games or different mechanics. Bringing new gamers into the hobby through well-executed fandom games is something that lead designer Andrew Wolf seems to do well. The rules recommend that advanced wizards who are already familiar with deck building games start at Game 3. Personally, I wanted the full experience, so I started right from the beginning even though I already know the mechanics.

In Harry Potter: Hogwarts Battle, players play and buy cards in an attempt to defeat all the Villains before they can gain control of all the Locations. Regardless of the Game, there are certain elements that will remain constant. Each turn always starts by revealing and resolving a Dark Arts Event, and then resolving Villain abilities.

Dark Arts Events are something that will hurt you and your teammates in some way (like losing health) or add a different challenge. A new one is always revealed at the beginning of your turn and it can really mess with your plans. Villains are also there to cause you trouble. Depending on the Game, there will be a different number of Villains shown. Each Villain has their own ability that will be triggered by certain game Events. These Villains can keep hurting you each turn until you defeat them and a new Villain is revealed to take their place.

Now it’s finally your turn to do something. Each turn you will (probably) have 5 cards in your hand. On your turn you’ll play all of these cards and resolve their various effects. The most common effects are for you to gain coins or attacks (lightning bolts). You’ll gain the amount of these shown on all your cards and put them on your player board for use later in the same turn.

Once you’ve resolved your cards, you can attack a Villain. Here you will assign lightning bolts to Villains. Each Villain will require a different amount of lightning to be defeated. If you assign all the lightning required to one Villain, you’ll defeat them and gain the shown reward.

Now it’s time to build your deck. The last step of your turn is to spend coins to buy from the 6 face up cards. These cards will be new Spells, Allies, or Items that will help you in your quest against the dark arts. You can buy as many cards as you can afford; they are put into your discard pile to be shuffled into your deck when your draw pile runs out.

Spoiler Alert: Click here to see some Villains from Games 1-3.

At the end of each player’s turn, there are a few cleanup actions that are taken. You check to see how many control tokens are on the current Location card. If it’s full, the villains control that Location and the next one is revealed. This can increase the difficulty level, so trying to stop the villains from gaining control of Locations is very important. You’ll also replace any Villains or cards that were removed from the board during your turn and return any unspent coins and lightning to the supply.

As a cooperative game, either everyone wins or everyone loses. The game will end in victory if you manage to defeat all of the Villains. However, if the Villains control all the Locations (by filling each Location with control tokens) before you get a chance to defeat them, the game is lost. Some Events and Villains will add control tokens to the current Location, but don’t worry, there are cards that you can buy to gain back control.

Ties To The Wizarding World

Let’s start with the look of the game. Of course, for the cards and player characters (Heroes) they already had a lot of existing art and graphics to work with, but I do appreciate the little details that are thrown in. For instance, the box is designed to look like a trunk and when you open it up the artwork on the back of the board continues that theme.

As mentioned earlier, each Hero has a starting deck that is unique to them. Their pets and trademark items (such as Harry’s invisibility cloak) make up their starting Allies and Items.

The Allies are one of my favourite parts of the games. These characters are introduced in thematically appropriate Games (read: years).

Spoiler Alert: Click here to some Allies from Games 1-3.
For instance, Hagrid is introduced in Game 1, Ginny in Game 2, Sirius in Game 3, and so on. 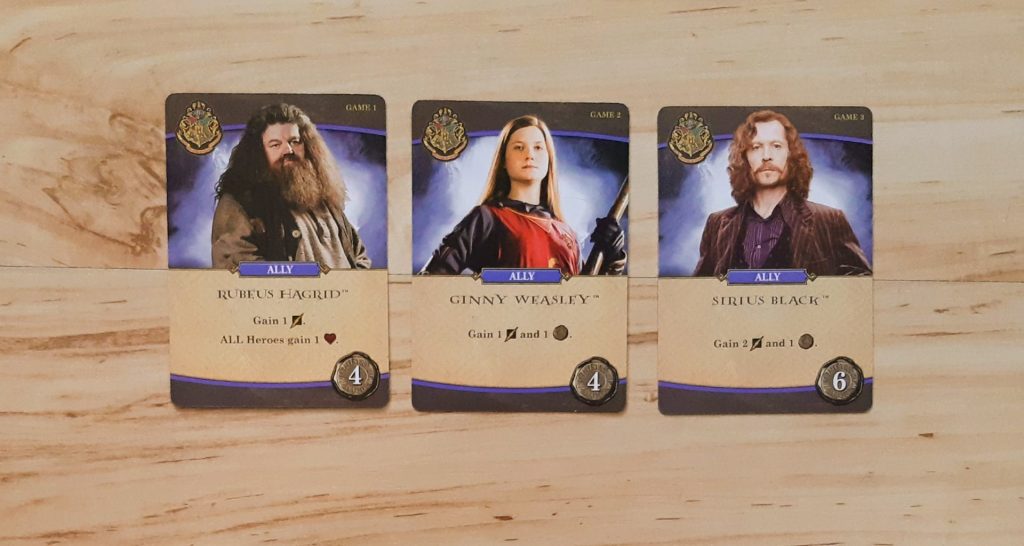 Similarly to Allies, new Villain cards and Dark Arts Events are introduced in the appropriate Games. These new components add to what was introduced in previous Games, so unfortunately that does mean that you could end up fighting Professor Quirrell in Game 7. But in order for the game to work how it does, this is necessary. There simply aren’t enough unique villains in each book to not have repetition here.

Finally, the Location cards that you have to protect from the villains change each game. This is a nice touch. The Locations are appropriate to significant places in the corresponding book/movie and they come out during the Game in chronological order.

Harry Potter: Hogwarts Battle is a great game for fans and their board gaming friends. The different Games enable players to develop their understanding of deck building and possible strategies as they progress through the game and also provide a way for fans to reminisce. Unlike a legacy game, you can play this game multiple times and start wherever you’d like in the “story”. I find that quite appealing. I should note, however, that once you have gotten to the later games it becomes a bit of a hassle to go backwards since you have to separate out the cards in the deck based on their Game.

I’ve played this game all the way through with the same group and also just played a few Games with another. Each Game is designed to build on the last, but they still act as standalone experiences. This means that you don’t need to commit to playing through the entire Harry Potter: Hogwarts Battle game. I’ll also note that this works just as well at 4 players as it does at 2. Like Pandemic, all the events and the progression of the game are turn-based, not round-based. That said, more players mean more Heroes that can lose health from Villains or Events, so some may find it more challenging at a higher player count.

But like any game, there are some areas that could be improved on. One definite area for improvement is the market. The market only refills when a card is bought from it; there is no action to clear it. This means that the market can get stuck if it has too many cards you can’t afford or just don’t want for strategic reasons. Clearly the designers noticed this flaw as well because the Monster Box of Monsters Expansion addresses this problem by allowing players to wipe the market once per game. On a similar note, as you move on to the later Games the deck of available cards keeps growing. Having no way to remove cards from play means that it can be really hard to get to specific ones you might need. Also, as much as I love the themed box, it is kind of large and awkward. So this makes fitting it on the game shelf a bit annoying.

Obviously, I really like this game. Having already played through and defeated Lord Voldermort, myself and Ashley Gariepy decided to try and turn it into a legacy game. We thought that our Heroes should be learning each year, so we decided that they could keep a card from the last Game in their starting deck (with some limitations — we didn’t want to break the game). We also implemented a method for clearing the market. We had quite a bit of fun with this. As I mentioned earlier, I’m glad this isn’t a legacy game, but it was fun to turn it into one.

If you’re a Harry Potter fan who enjoys cooperative board games, I strongly suggest you check out Harry Potter: Hogwarts Battle. I think you’ll find it just as charming as I did.

Silk Review – Out to Pasture

How Board Games Helped Me Grieve

Remember Our Trip Review – A Holiday Worth Taking